Carrot Cake has always been one of my favorites, but only when it’s made my way. That’s why I call this cake, Caryn Cake. There’s a secret ingredient that as of today, is no longer a secret! It’s Mace. Mace is a spice made from the outer covering that surrounds nutmeg seeds. The flavor is similar to that of nutmeg, but with its own subtle peppery flavor that gives this Carrot Cake it’s “je ne sais quoi”. I just know you will love it. 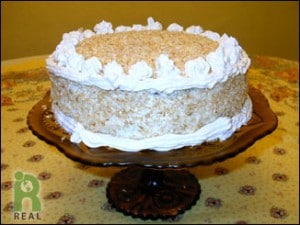 Get the GLUTEN-FREE version of this recipe here.

To make the frosting: Blend tofutti cream cheese, vanilla extract, maple syrup or sugar, and lemon juice with a fork. Don’t use an electric beater, it can make it runny. Beat with fork until smooth, do not overbeat. Let chill several hours.

Option – Toast the Coconut: The frosting can be topped with plain coconut or toasted. To toast the coconut spread it out on a sheet pan and toast at 350 for several minutes. Keep and eye on the sheet – it can brown quickly and burn. Shake the sheet ever one of two minutes so the coconut gets evenly toasted. When lightly browned, remove coconut from over and let cool.

Assemble: Frost top of one layer, place the other layer on top and cover with frosting. Add coconut to top and sides by gently tossing it onto the frosting. Coconut that does not stick can be pressed into the frosting with a knife.