KAREN DAVIS, PhD is the founder and president of United Poultry Concerns, a nonprofit organization dedicated to the compassionate and respectful treatment of domestic fowl. Founded in 1990, United Poultry Concerns addresses the treatment of domestic fowl in food production, science, education, entertainment, and human companionship situations. Karen has a PhD in English from the University of Maryland-College Park where she taught for twelve years in the English Department.

Karen Davis has essays in Animals and Women: Feminist Theoretical Explorations (Duke UP, 1995), Terrorists or Freedom Fighters: Reflections on the Liberation of Animals (Lantern Books, 2004), Animal Liberation Philosophy and Policy Studies Journal Vol. 2, No. 2 (Center on Animal Liberation Affairs, 2005), and Encyclopedia of Animals and Humans (Greenwood, 2007). Her essay “Chicken-Human Relationships: From Procrustean Genocide to Empathic Anthropomorphism” is featured in the Spring 2010 issue of Spring: A Journal of Archetype and Culture. An extended version of this essay, “Procrustean Solutions to Animal Identity and Welfare Problems,” forms the opening chapter of Critical Theory and Animal Liberation (Rowman & Littlefield, 2011). Karen also has a chapter, “From Hunting Grounds to Chicken Rights: My Story in an Eggshell,” in Sister Species: Women, Animals, and Social Justice (forthcoming, University of Illinois Press, 2011). Her contribution, “Freeing Birds From Food Production,” is forthcoming in The Global Guide to Animal Protection by Andrew Linzey (University of Illinois Press, 2011).

At the University of Maryland Karen founded the Animal Rights Coalition in 1989, and she pioneered a course on the role of animals in the Western philosophic and literary tradition in the University of Maryland Honors Program. Karen is a featured speaker at the annual National Animal Rights and Taking Action for Animals conferences in Washington, DC and Los Angeles. On July 2, 2002, Karen was inducted into the U.S. Animal Rights Hall of Fame “for outstanding contributions to animal liberation.”

On November 14, 1999, Karen Davis was profiled in “For the Birds,” in The Washington Post, winner of the 1999 Ark Trust Genesis Award for Outstanding Newspaper Feature for 1999
(www.upc-online.org/991114wpost_karen_davis.html).

On November 14, 2000, Karen and United Poultry Concerns were featured on the Canadian Broadcasting Corporation’s Primetime TV show Witness, in “Chickens are People Too,” produced by the Emmy-winning filmmaker, John Kastner. In 2002 Karen gave a presentation on “The Beauty, Dignity & Abuse of Chickens” at the Yale University Chicken Conference, May 17-19.

The October 2002 issue of Egg Industry magazine featured Karen Davis and UPC in a special interview; and the September 2006 issue of Washingtonian magazine represented Karen and UPC’s chicken sanctuary in Machipongo, Va. as a “counterpoint” to the Delmarva poultry industry on the Eastern Shore
(www.upc-online.org/broiler/9230842day.html).

On April 20, 2007, media celebrity Ira Glass, host of the popular Public Radio International program This American Life aired on NPR, appeared on Late Night with David Letterman where he told Letterman and millions of viewers that his visit to United Poultry Concerns’ chicken sanctuary in 1998 led him to become a vegetarian. Karen Davis and UPC’s sanctuary are currently featured in two major films on DVD: The Emotional World of Farm Animals narrated by Jeffrey Masson & frequently aired on NPR; and Animal People: The Humane Movement in America produced by Gary Kaskel and United Action for Animals in 2007.

Since 1999, Karen and UPC have hosted nine annual conferences on farmed animal advocacy issues. UPC’s 7th annual conference presented the topic of “Inadmissible Comparisons” at the New York University Law School, cohosted by Lantern Books and the NYU Student Animal Legal Defense Fund, March 24-25, 2007. In March 2008, Karen and UPC hosted a conference on farmed animal and vegetarian advocacy issues in Norfolk and Machipongo, Virginia and on October 30, 2010, UPC hosted its 9th annual conference, in Fairfax, VA on the topic of “Expert Discourse and the Problem of the Chicken”
(www.upc-online.org/forums/).

In 2010, Karen and a group of New York City activists formed The Alliance to End Chickens as Kaporos (www.EndChickensAsKaporos.com), a project of United Poultry Concerns comprising people who seek to replace the cruel practice of swinging and slaughtering chickens in Kaporos rituals with money or other non-animal symbols of atonement. On October 9, 2010, Pulitzer Prizewinning photojournalist Carol Guzy published “An ancient tradition draws protests” in the online edition of The Washington Post , prompted by the Alliance’s Rally to End Chickens as Kaporos, on September 12, 2010, in Brooklyn, NY (www.endchickensaskaporos.com/101011wpost.html).

Karen is the author of several books including A Home for Henny (a children’s book published by UPC); Instead of Chicken, Instead of Turkey: A Poultryless ‘Poultry’ Potpourri (a cookbook published by the Book Publishing Co.); Prisoned Chickens, Poisoned Eggs: An Inside Look at the Modern Poultry Industry (Book Publishing Co.); More Than a Meal: The Turkey in History, Myth, Ritual, and Reality (Lantern Books); and The Holocaust and the Henmaid’s Tale: A Case for Comparing Atrocities (Lantern Books). The 2009 Revised Edition of Karen’s landmark book Prisoned Chickens, Poisoned Eggs (first published in 1996) is described by the American Library Association’s Choice magazine as “Riveting . . . brilliant . . . noteworthy for its breadth and depth.” See Book Reviews at www.upc-online.org/bookreviews/. 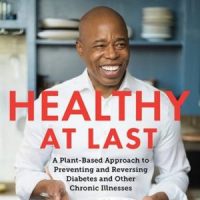 Listen: Tuesday, September 29, 2020, 4pm ET by going to PRN, The Progressive Radio Network. * Leave comments and questions on the PRN voicemail line, 862-800-6805, with your name, the name of this show, It’s All About Food, and your question to be answered on the next program. * Listen by phone to hear the…