Are you ready for something completely different?

REGISTER FOR THE FREE LIVE WEBINAR:
The Psychology and Neuroscience of Reboot Rezoom

Have you heard of Dr. Susan Peirce Thompson and this movement she started that’s sweeping the world? She wrote the New York Times bestseller Bright Line Eating and created a weight loss solution that is 55 times more successful at getting an obese person into a right-sized body within one year than any other approach. Her first masterclass—the Food Freedom video series—that swept the world starting in 2015, and almost a million people from literally 190 of the 195 countries on earth have seen it. Since then, she’s been hard at work creating something very exciting…

She has just released a new, FREE masterclass series all about navigating the holidays. 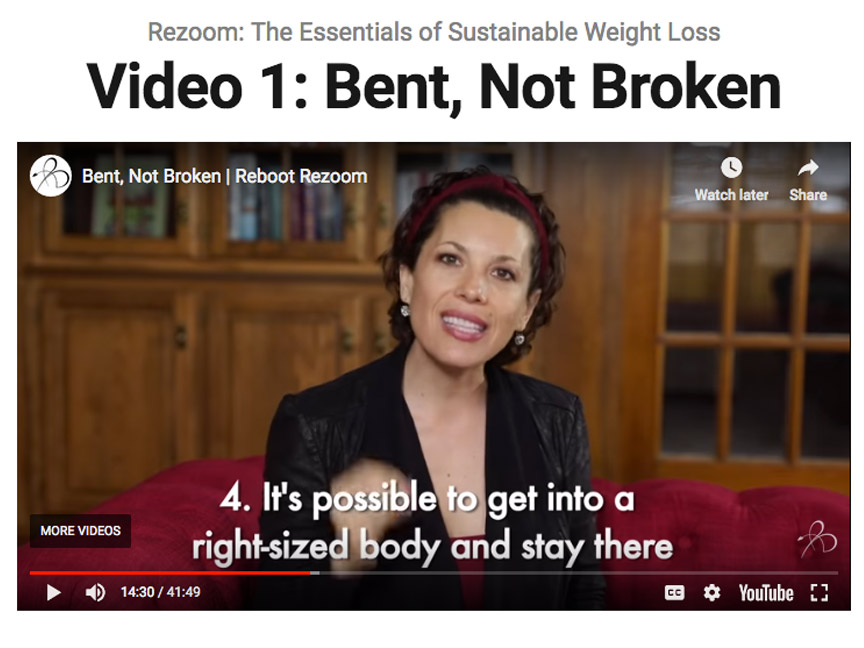 New Year’s is coming up, which means that millions of people are about to launch off on their resolutions. Unfortunately, only a tiny fraction of resolutions that are set will actually be accomplished. People are stuck in this loop of trying to improve themselves and continually failing, and after enduring the frustrating merry-go-round countless times herself and breaking free, Susan created a framework that solves the problem in a completely counterintuitive way—it’s definitely not what you would think! If getting into a right-sized body or making any kind of health overhaul in 2019 is on your radar screen, this is the video series that you absolutely must catch.

It’s completely FREE, but it’s only going to be up for a short time.

How to ACTUALLY achieve your New Year’s resolutions…

Have you ever bought a gym membership, exercised faithfully for a while, and then paid out the rest of the year’s membership without setting foot in the gym again? Have you ever begun a meditation practice and meditated daily until life got in the way and you stopped altogether, but a few years later, you still wished you could be a faithful meditator? Have you ever started a new dietary regimen, stuck to it perfectly for a stretch of time, released a bunch of weight and felt great, and then found yourself off the wagon a year later, back to your old habits, and as heavy as ever?

These scenarios are all very typical. They happen throughout our society. In fact, it’s a trap that MOST of us fall into when we try to adopt new habits. We start off with lots of motivation and good intentions, and we succeed for a while, but then we fall off track and are back to square one. 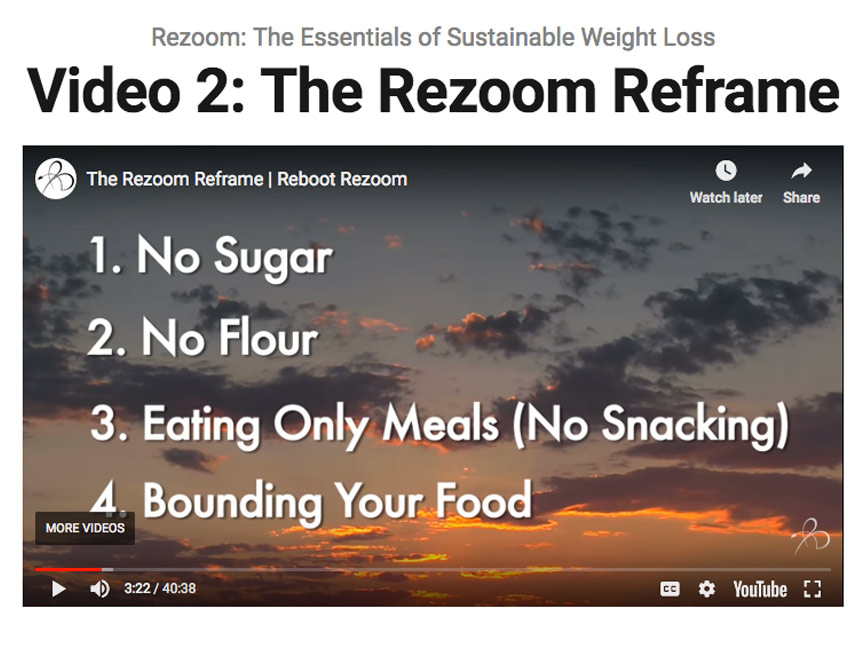 Dr. Susan Peirce Thompson”s New York Times bestselling book Bright Line Eating and her online program by the same name have swept the world over the past three years. If someone who is currently obese starts her program today, they are 55 TIMES more likely to be at a normal BMI within one year than if they do anything else with that year.

Fifty-five times! That’s nothing short of mind-blowing. And she’s at it again. Dr. Susan has been thinking deeply about this cyclical problem with creating habit change for many years because in her field (the psychology and neuroscience of sustainable weight loss), this is the crux of the issue. She’s discovered a collective misunderstanding about what a successful journey looks like. There is a fundamentally wrong way that everyone is thinking about the process of change, and it’s setting them up for failure. But it turns out, there’s a simple reframe that, once you learn about it, fundamentally and forever inoculates you against falling into that pattern.

The second video in the series is now available, and when you watch it, you’ll learn exactly how to reframe the process of change so you can be successful with any goals you set. It’s simple. It’s powerful. It’s brilliant. And it’s way simpler than you’d think. Once you see what you’ve been doing wrong and how it’s contributed to the miserable cycle of failure, you’ll be able to get off that merry-go-round forever.

This Masterclass series is completely FREE, but it’s only going to be up for a short time, so don’t miss out.

The formula for living in a right-sized body long term 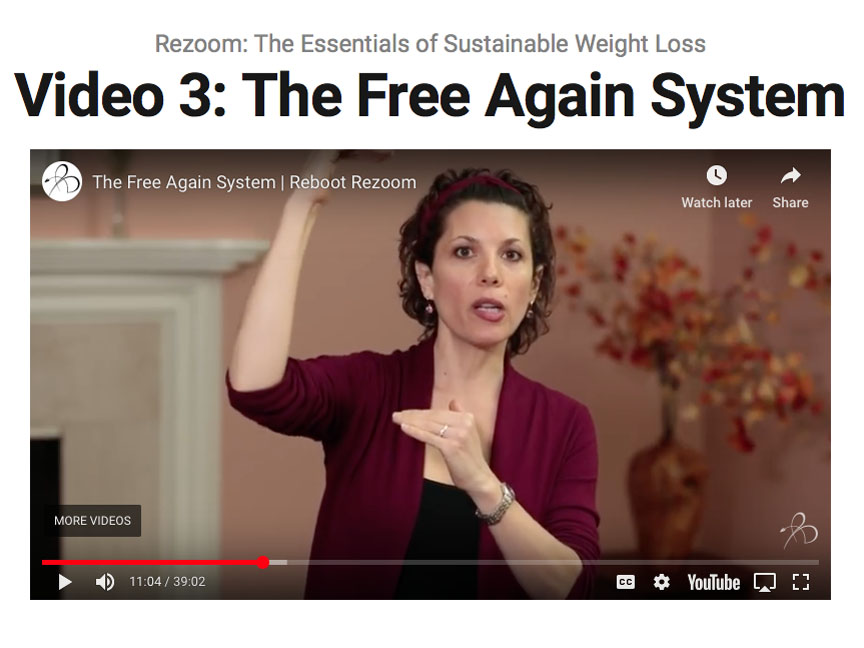 The first of the year is coming up and it’s time for people to launch off on new weight loss endeavors. The trouble is, so many of us have tried and failed at that game countless times before. What makes us think this time will be different?

Having more motivation isn’t the key. Finding the right formula of macronutrients isn’t the solution. Buying a new gym membership isn’t going to solve anything. The answer is found in a reframe of the process itself—we need to think about it in a fundamentally different way.

Just in time for January 1st, Dr. Susan Peirce Thompson has released a brand-new FREE video series and a system for permanently stepping off that merry-go-round. In this third video of her series, she outlines that system point by point. She walks through it with a whiteboard and explains how to think about your weight loss journey differently so you never fall into that yo-yo dieting trap again.

Here is the finale of this video series! 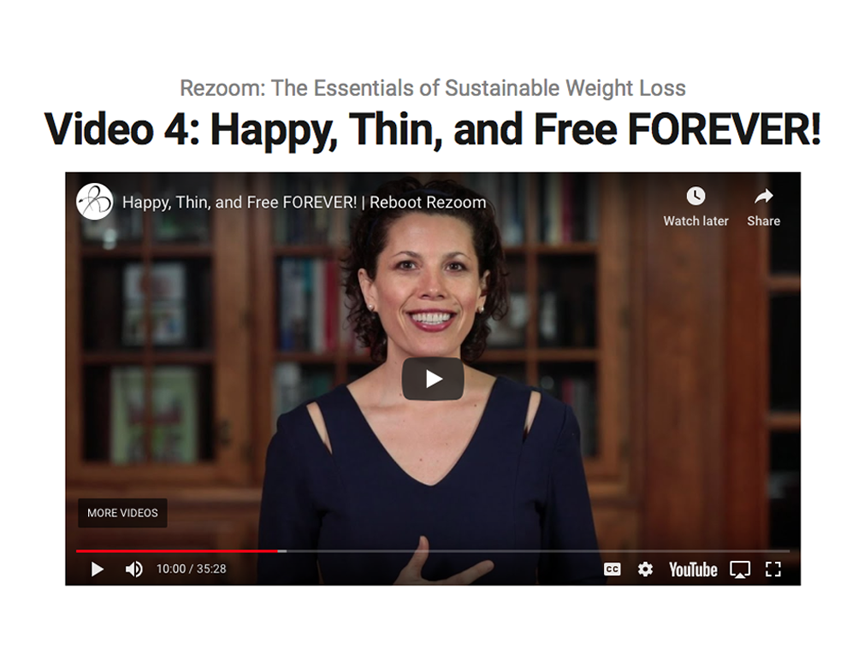 REGISTER FOR THE FREE LIVE WEBINAR:
The Psychology and Neuroscience of Reboot Rezoom
Saturday, December 29th at 4pm EST.