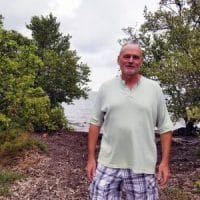 Barry Wray helped form the Florida Keys Environmental Coalition in 2010 in response to threats for the Deep Water Horizon Oil Spill to the ecosystems and livelihood of the FL Keys. His leadership at that anxious and critical point in time was a rallying point for many within the community and the efforts put forth resulted in a number of resiliency accomplishments including over 400 people within the Keys community becoming HAZWOPER qualified to assist with any response to oil intrusion, inclusion into a variety of EOC operation plans to provide access to qualified local volunteer base and an energized network of local volunteers who have remained active and available within the community.

Barry, together with a team of Keys wide activists, who range from globally recognized PhD and Medical Doctors to Moms and Realtors, has helped lead the defense of the Keys from the premature release of Genetically Modified Mosquitoes until they are proven safe, championed changes to aerial chemical dispersal to prevent contamination to potable water system and pioneered a novel engineered approach to improving near shore water quality in the Keys using indigenous filter feeder species in engineered habitats.

For over 30 years Barry Wray has considered the Keys as part of his life and settled permanently in Islamorada 20 years ago. Barry has a Master’s of Science in Electrical Engineering from the University of Massachusetts along with years of extensive project management and global engineering achievements for companies like GE and Ericsson. Currently, Mr. Wray serves and the Chief Technologist for Solarbeam International, specializing in renewable energy powered perimeter intrusion detection security systems.

Barry also has a long history of public service including student government president, helping found the largest student association in the history of Massachusetts (the State Student Association of Massachusetts) and served on its board and as its Chair, and 9 years of service including Chairmanship of the Workforce and Affordable Housing subcommittee and 5+ years on the Water Quality Subcommittee for the Village of Islamorada,

Comment to the EPA to stop genetically engineered mosquito experiments in Harris County, Texas (Houston area) and Monroe County, Florida (the Keys). The EPA has re-opened comments and the deadline to comment is June 07, 2018.