Karen Davis, PhD, For the Birds: From Exploitation to Liberation 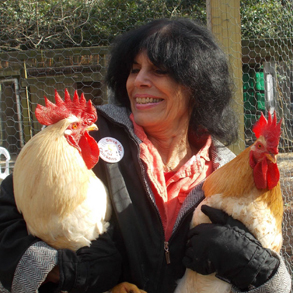 KAREN DAVIS, PH.D. is the President and Founder of United Poultry Concerns, a nonprofit organization that promotes the compassionate and respectful treatment of domestic fowl including a sanctuary for chickens in Virginia. Inducted into the National Animal Rights Hall of Fame for Outstanding Contributions to Animal Liberation, she is the author of Prisoned Chickens, Poisoned Eggs: An Inside Look at the Modern Poultry Industry; More Than a Meal: The Turkey in History, Myth, Ritual, and Reality; The Holocaust and the Henmaid’s Tale: A Case for Comparing Atrocities; a children’s book A Home for Henny; and Instead of Chicken, Instead of Turkey: A Poultryless ‘Poultry’ Potpourri, a vegan cookbook.

For thirty years, Karen Davis has been advocating for, writing about, and studying the world of chickens and other domesticated fowl. As the founder and director of United Poultry Concerns, Davis has done more than perhaps anyone to reveal the complex and socially rich lives of birds. Her writing―intellectually rigorous, passionate, erudite, and witty―brings fully to the fore the great injustices we have perpetrated on these intelligent and loving creatures.

For the Birds showcases Davis’s three decades of popular and academic work. She tells the story of how she became an advocate and the many individual birds she has known and whose lives and deaths have deepened her commitment to seeking their freedom from suffering.

Stirring, provocative, and brilliantly written, For the Birds illuminates one woman’s enduring quest to change our perceptions of those animals we routinely confine, abuse, and kill by the billions.