RRRRRRRRatatouille! This is one of those dishes that says summer to me. It’s easy to make and delicious served hot or cold. I made a lot of ratatouille when I lived in the south of France. Everyone has their own way to make it, some more complicated than others, too often drenched in olive oil. This is my version – oil free and full of the flavor of fresh picked garden vegetables. Often it’s best to chop everything first before cooking but with this recipe I chop while I cook. The vegetables that need to cook longer get chopped first and start to cook, while I chop the vegetables that require less cooking time. By the time I am finished chopping, I can tidy up a bit and then it’s done. Ratatouille is great on its own, served over rice or as a side or shown here, all dressed up, wrapped in light and delicate buckwheat crepes. 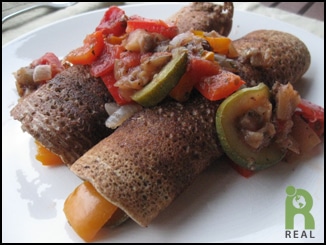