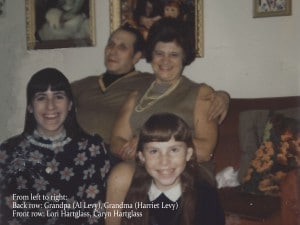 Over the river and through the woods, to grandmother’s house we go… As a child I loved the images in that song and thought of them every Thanksgiving as my family took off to my grandparents’ home, a one-bedroom apartment in Bayside, New York, where the Matinecock Native American first settled in 2000 B.C.  I’d think about the Native American Indians too since I had learned in school to be thankful for them teaching the Pilgrims how to have enough food to eat and that this was the reason we were celebrating the holiday.  I’d hum the song to myself or sing out loud with my sister even though there were no rivers to go over from our suburban home in Dix Hills further east out on Long Island on the way to the urban woods of brick apartment buildings in Queens. It helped pass the time driving along the seemingly endless 24 miles on the “expressway.”

Heading to my grandparents’ home for Thanksgiving was something to be excited about. I loved holiday dinners with the festive, traditional foods and the dinner table beautifully appointed.

My first memory of Thanksgiving is food related. I especially loved the mashed sweet potato dish, drowned in the sugary sweetness of maple syrup and brown sugar, topped with marshmallows.  What child wouldn’t love candy for dinner? When the light orange mash was put on my plate I happily dug my fork right in it.  My mouth puckered in bitter confusion.  This was my first experience with turnips.  Actually it was mashed rutabagas; turnips are typically white-fleshed and rutabagas have a yellow orange color but we called them turnips. It didn’t matter. I was expecting overly sugared sweet potatoes and got something else.  I would be disappointed several years in a row until I figured out the difference and could avert this unpleasant tasting mishap.

And of course there was the turkey.  That was all before I discovered that the turkey was a who, a someone, instead of something sliced and sitting on top of creamy mashed potatoes, covered in tasty gravy.  As a teenager I decided I did not believe in killing animals and I became a vegetarian.  Over the years I learned that the treatment of turkeys in factory farms was far worse than anything I could imagine.  Turkey was off the plate.

Since then I’ve had lovely Thanksgiving feasts with all of the trimmings and none of the flesh. I can even remember one Thanksgiving spent alone. During my last year in college I realized I had too much work to do and decided not to go home for the holiday.  On Thanksgiving Day I took a brief break from my work and cooked up a very large sweet potato. I ate it hungrily while sitting on my bedroom floor with my textbooks opened all around me. It tasted sweet and good, without the maple syrup and brown sugar, and I was grateful to have it.

Thanksgiving continued to change its colors just like the autumn leaves.  I was living in California in my twenties and gathered for dinner at my (then) boyfriend’s home with his family. I invited my two best girlfriends, both, like me, transplanted New Yorkers.  Susan brought Brussels sprouts, and Nancy and I berated her during the entire dinner,  “Brussels sprouts, yuck! Who eats Brussels sprouts? Nobody likes Brussels sprouts!” Three decades later I cringe at this memory for two reasons.  First, it was such a nasty thing to do, to pick on a friend who had brought food to the table.  Second, I’ve learned to love Brussels sprouts!  (I’ve also learned to love turnips and rutabagas.)

Living in the south of France for 4 years in my thirties, obviously no one celebrated this American holiday. Nor would the more sophisticated French palates tolerate our flour-thickened starchy gravy and overly sweetened apple pie.  Not unless they were French students learning the English language and some of our American culture. One of my dear friends there, Josée, taught English in high school and one year she invited me to her school’s Thanksgiving event.  I was the celebrity, a real American at a mock American holiday celebration.  My gratitude overflowed for my French friend who wanted me to feel a little more at home.

When I returned back to New York in my forties I gently told my parents that I would love to spend Thanksgiving with them but there could be no “dead bird” on the table. My parents relented, graciously.  After all, their three children (myself, my brother and sister) were now vegan.  My mother and I would cook up a glorious feast. We were even featured in a local TV news spot one year as the vegetarian family celebrating Thanksgiving.

When my brother got married, things got complicated as they frequently do when more members are added to the family and extended families get involved. Thanksgiving moved to my brother Barry’s mother-in-law’s home in White Plains. It is centrally located, sort of, from where everyone lives.  My aging parents who live out east on Long Island get the worst of it every year. Their commute is close to 2 hours, not including traffic and there is always horrendous traffic on Thanksgiving.  Our host, Diane, does her best to accommodate all of the dietary differences and everyone always has plenty to eat.  The turkey is kept in the kitchen, not displayed on the dinner table, for those of us who lose our appetite at the sight of a dead bird.  At Diane’s Thanksgiving table, there are omnivores, vegetarians and vegans; her son who is allergic to nuts; her sister who will not eat soy; her granddaughter who has Celiac disease and cannot eat wheat or any gluten.  The New Yorker magazine came out with a cartoon entitled “The Last Thanksgiving” featuring ten family members around a table, each with different dietary requirements.  I smiled when I saw it because it was just like Thanksgiving at Diane’s.

When I think about it, Thanksgiving has an even deeper and more significant meaning now, with Gary, who came into my life again eight years ago. We had first met in 1991 in California, at Stanford, when we starred in The Beggar’s Opera together. We reconnected in 2006 with an email from a mutual friend. Shortly thereafter I was diagnosed with advanced ovarian cancer.  Gary left everything he had in California; his family, friends, the theatre he built in San Jose and he moved to New York to share our lives together and take care of me while I got through treatment.  It was the day before Thanksgiving in 2007. Gary and I had prepared some dishes to bring to the Thanksgiving event in White Plains. I got a call from my chemo doctor. He told me that my platelets were dangerously low and I had to rush to the hospital for a transfusion. Gary came with me. We hoped that I could get my transfusion and be home in time for the holiday dinner.  We ended up staying in the hospital two nights.  On Thanksgiving Day while being transfused I asked my parents to pick up the food we’d prepared and to bring it to the family dinner we would be missing. They stopped by the hospital afterwards and brought us some leftovers. I was most grateful that year for people I didn’t know, the strangers, the donors who had generously given their platelets and red blood cells so that I could experience many more Thanksgiving holidays to come. Today, nothing brings home the meaning of Thanksgiving more than these life-saving gifts.

The next year, Gary and I flew to Florida to visit with my sister Lori’s family for Thanksgiving.  Lori had been my rock during my cancer journey and it was a good opportunity to show my gratitude for all that she had done.  Lori is a hardworking attorney who doesn’t like cooking very much. She happily gave us free rein in the kitchen and we prepared a sumptuous meal for her, my brother-in-law Ralph and nephew Max.

As an activist, I am more aware than ever of the cruelty and exploitation in the world.  Thanksgiving is a bittersweet time for me.  While enjoying the grand feast I think about the animals that we torture and kill every year for food. I think about the Indians who taught the early American settlers how to grow corn and endure harsh winters; how we expressed our gratitude by wiping them out.  I am not a religious person but the Thanksgiving holiday is sacred to me.  I want to honor that sacredness. That means no dead bird on the table or near the table.  That means loving and savoring all the food that we eat and inventing new dishes that can easily become the new traditional main event, carved at the table, like Gary’s Red Kuri Squash with Polenta Stuffing. A few years ago, after celebrating Thanksgiving for a number of years with my parents, my brother’s family and his in-laws, Gary and I realized we were longing for something we had lost and loved at Thanksgiving. We missed preparing our favorite dishes. It was time to bring the holiday back home to our one-bedroom apartment in Queens, just like my grandparents’ home when I was a child.

Which is just what we did last year. Gary and I decided to create some traditions of our own with Thanksgiving in our apartment in Forest Hills. We both love to cook. We designed a stunning menu and spent about three days preparing the feast. We took turns taking over the kitchen. I focused mostly on the baked goods and Gary created the featured savory dishes.  We worked in harmony; cooking for the joy of it and for no other reason. At the last minute we invited our friends, Eytan and Rosie who did not have dinner plans.  My parents came over for dessert on their way home after making the trek to Diane’s house for dinner.  Our neighbors who live in our building on the same floor stopped by late in the evening after their family dinners. Different people came and went throughout the day, with some staying long into the night as we brought out savory leftovers and sweet treats.

This year we are looking forward to another Thanksgiving, at home.  I am relieved that my parents will be forgoing the big schlep to White Plains and joining us in Queens for dinner. We have begun to plan an elaborate menu. At the last minute we will see who might want to join us. I will ask my mom to bring the mashed turnips and there will most certainly be Brussels sprouts. 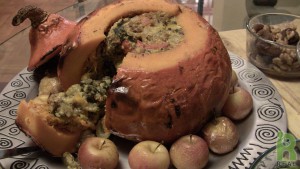 Get the recipe for our newest Thanksgiving tradition: Red Kuri Squash with Polenta Stuffing 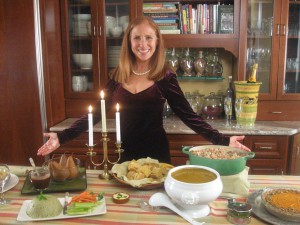 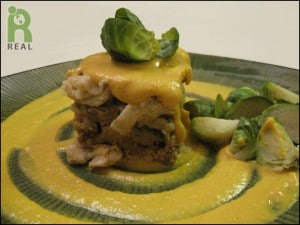 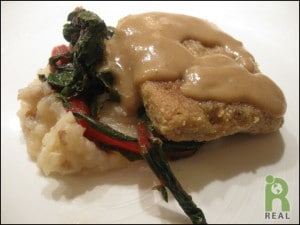