Early this morning I headed to the Marriott Marquis for the Head and Neck Cancer Congress opening ceremonies where actor Michael Douglas was the featured guest speaker. As an ovarian cancer survivor I am interested in all kinds of cancer research. A few weeks ago, I received an invitation to attend this event, the largest Head and Neck Cancer Congress in history in Manhattan. I've learned to go where the universe takes me and accept invitations as they come. For example, when I was asked to speak to 250 cattle producers about animal agriculture's affect on climate change as the lone vegan, I jumped at the opportunity. I learned the importance of "preaching to the fire" – how we need to have open lines of communication with people we don't agree with, if we are going to move forward. Last week, was another example, when I was contacted by the conservative think tank, The National Center for Public Policy Research to see if I wanted to interview Jeff Stier, their director of Risk Analysis who was concerned about the appointment of the environmental nutritionist Angela Tagtow to head the USDA's Center for Nutrition Policy and Promotion. I did not agree with Mr. Stier's position and look forward to what may come out of the USDA under Taglow's leadership. But I thought it was important to "preach to the fire" again and I did talk with Jeff Stier on my It's All About Food show. It was a lively, enjoyable debate. You can listen to that interview here.

When I scanned the program for the Head and Neck Cancer Congress I did not see anything regarding the role of nutrition in the prevention or treatment of head and neck cancers. I was not surprised. Few medical doctors are knowledgeable about nutrition and they receive little or no nutrition education in medical school. Doctors are not trained in patient's general health. This is one of the reasons why I traveled to Evanston, IL to the Block Center for chemotherapy back in 2006 and 2007. Dr. Keith Block and his staff understood the importance of good nutrition in cancer treatment. The wrong foods, like red meat, poultry and milk products can stimulate more oxidative damage and cancer growth. Berries, on the other hand, have antioxidant protection and are anti-cancer super foods. Higher sugar intake from sugary foods and refined flour products, produces more insulin, a growth factor for cancer, and stimulates cancer growth. Dr. Block says "Cancer cells are glucose guzzlers." I remember thinking about this every time I was given a sugar solution to drink before having a PET scan. The way the scan works is by seeing the cancer cells that divide more rapidly than healthy cells when glucose is introduced into the body. It wasn't hard for me to connect the dots between sugar and cancer. Why don't most cancer doctors get it?

This morning, I met one woman working in cancer research and asked her about nutrition. She said she was involved with one study with women with breast cancer, looking at diet and exercise. I asked her for more detail and she said there was the control group and then another group of women were on a special diet, and there was an exercise group. I asked her what the diet was and she explained it was a Nutrisystems diet. I sighed. We've learned since the 1970’s from epidemiological studies that excess body weight gain is linked to increased risk for many cancers including breast cancer. But don't we know more than that by now? Shouldn't we be evaluating not just weight loss but the power of immune system boosting plant-foods? While going through my treatment for advanced ovarian cancer I was not about to wait for any trials to be completed! I did the research and followed a plan that would increase my chance of survival. This included nutraceuticals to boost my immune system during chemotherapy and nutrient dense, anti-cancer fighting, whole, plant-based foods. I ate dark leafy greens every way imaginable, raw, steamed, juiced and in powders and concentrated pill form. I still have a daily green juice. I know that's an important part of why I am celebrating 7 years cancer-free this month. Why doesn't the diet research today use the foods we know are best at fighting cancer and boosting the immune system? Why would a weight loss diet plan for breast cancer patients allow foods that promote cancer risk, foods like meat, dairy and highly processed white flour products?

During the conference break everyone headed to the exhibitor space for refreshments. Can you guess what was being served? Bagels and cream cheese spreads, sugary jellies, cookies, dairy yogurt, coffee and teas: a selection of cancer promoting foods! Would cigarettes and cigars be served at a lung cancer conference? Why are cancer-causing foods served at any event dedicated to fighting cancer? The racks of breads and cookies disappeared quickly. I talked to the CEO of one company that was exhibiting information on an immunotherapy treatment. I mentioned the selection of refreshments and how nutrition was not on the conference agenda. He nodded in agreement and said that it was generally known that the healthier a cancer patient is the better their outcome will be when treated. I said to him, "Shouldn't patients be kept as healthy as can be when being treated with any chronic disease?" 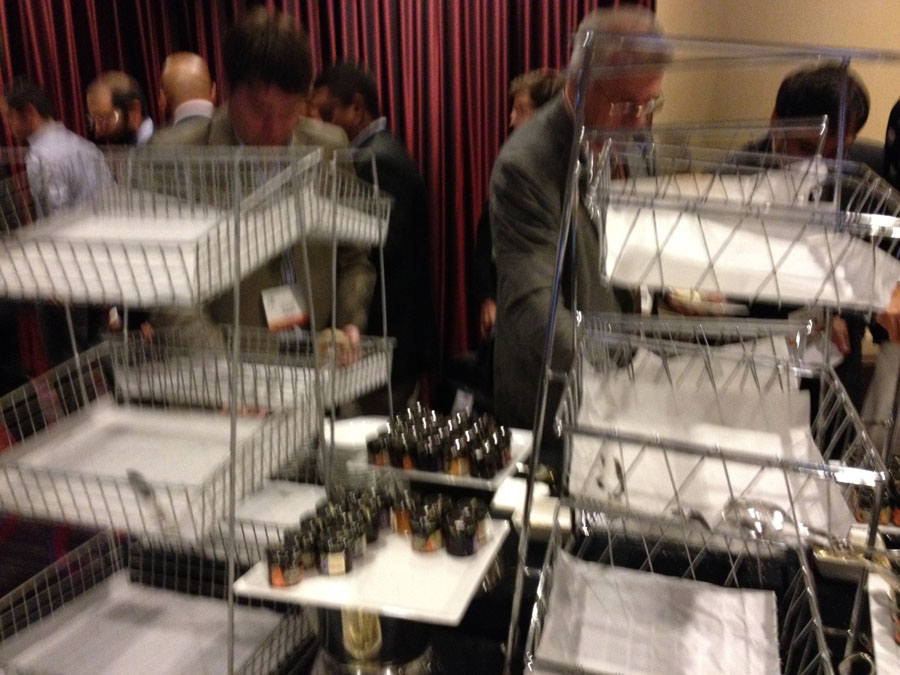 The opening ceremony was all pomp and circumstance, with actress Jessica Tar and CNN's Senior White House Correspondent, Dan Lothian as the Masters of Ceremonies, both cancer survivors. We heard a Chopin Flute and Harp Duet by Elizabeth Mann and Stacey Shames, the National Anthem sung by Toral Shah, and the New York City Police Band led the Parade of the Nations (click on the picture below to see and hear it) through the center isle of the conference ballroom. 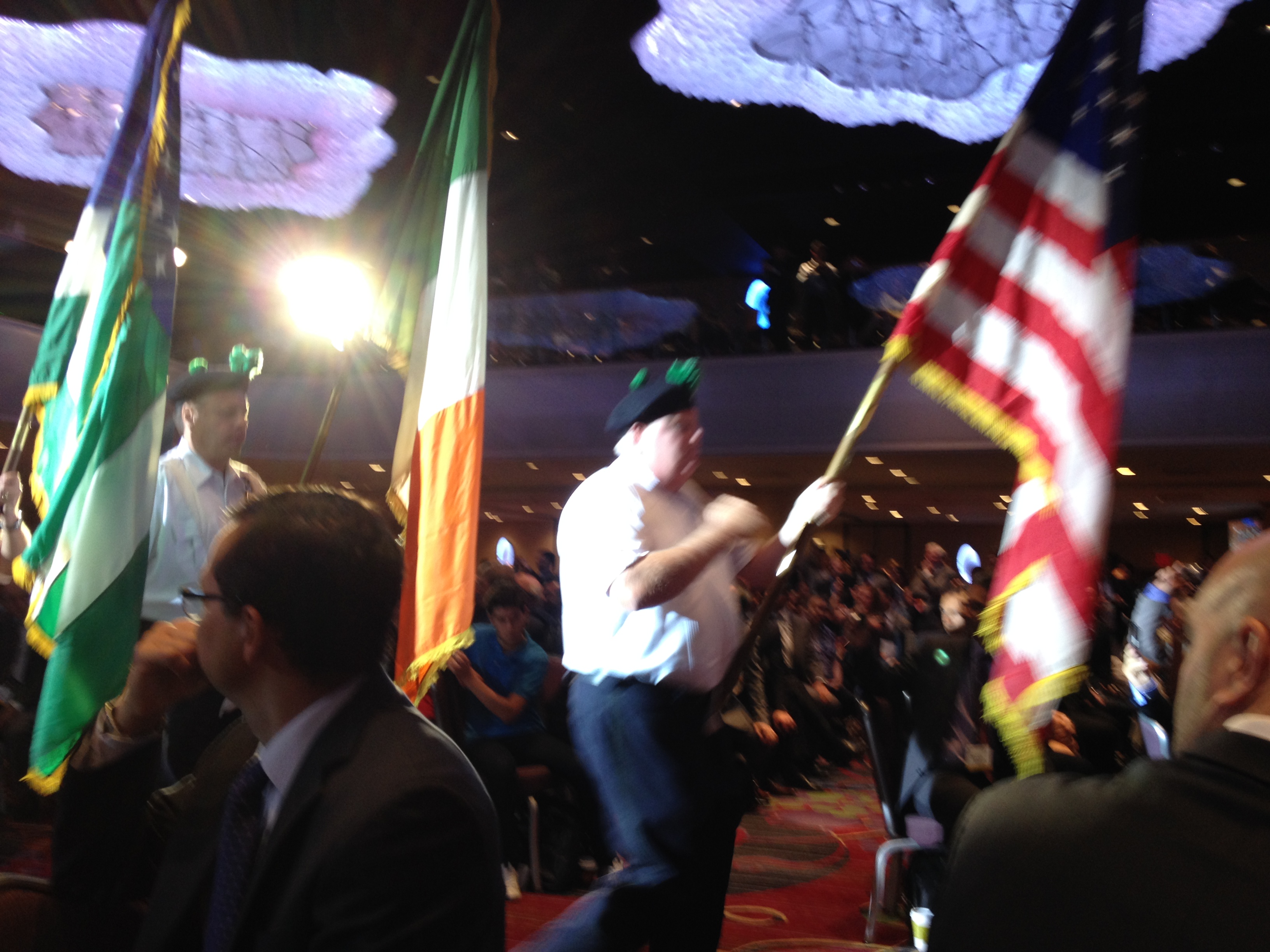 There were welcome talks from Craig Thompson, MD, President of Memorial Sloan Kettering Cancer Center; Terry Day, MD, President of American Head and Neck Society; William Wei, MD, Director International Federation of Head & Neck Oncologic Societies; Bevan Yueh, MD, Program Chairman; Jatin Shah, MD, PhD, Congress Chairman. The highlights were the talk by Catherine Zeta-Jones followed by her husband Michael Douglas, who is also a throat cancer survivor. Near-vegan President William Clinton spoke to us via video. I am sure many of the doctors and researchers attending were aware of Clinton's dramatic weight loss and boost in vitality from eating a primarily whole foods, plant-based diet. I hope they too are starting to connect the dots with nutrition and cancer treatments. 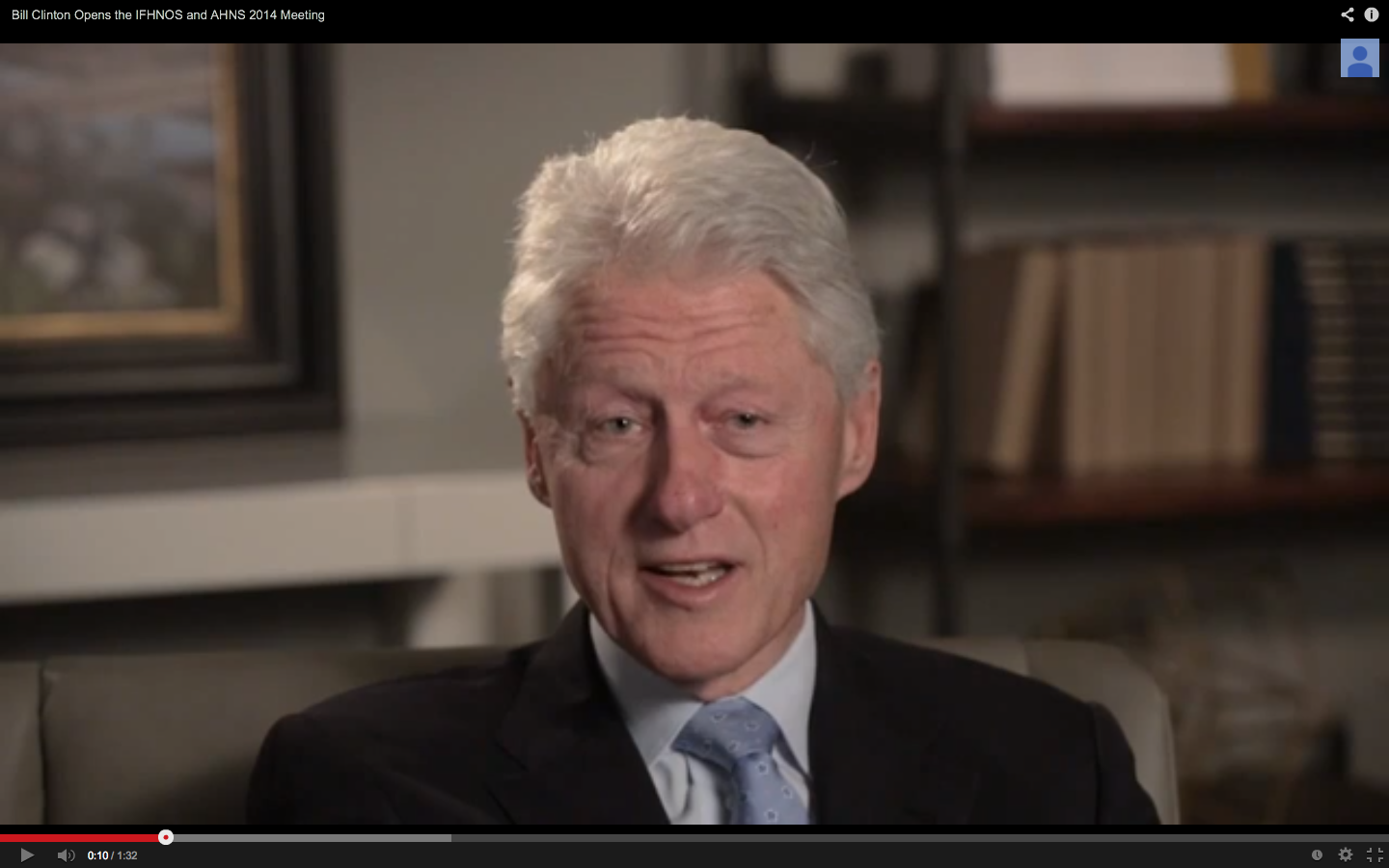 I spent the morning preaching to the fire. Surrounded by the best and the brightest head and neck cancer experts from around the world I was planting seeds about nutrition, and the importance of boosting the immune system with whole, plant-based foods and letting them know that their breakthrough discoveries will work better when patients are in better shape to fight cancer, to combat their illness and treatments will be more effective.

Please help support the work we do at Responsible Eating And Living during our Summer 2014 Fundraising Drive. And if you haven't watched our 70-minute documentary The Lone Vegan Preaching to the Fire, I hope you will make the time to watch it soon. Please share it with your family, friends and colleagues. We can all work together to make this world a better place.