The Bellini, one of Italy’s most famous cocktails, is made ​​with sparkling white wine (Prosecco) and pureed white peaches (succo di pesca). If peach puree is not available try pear or another fruit nectar. 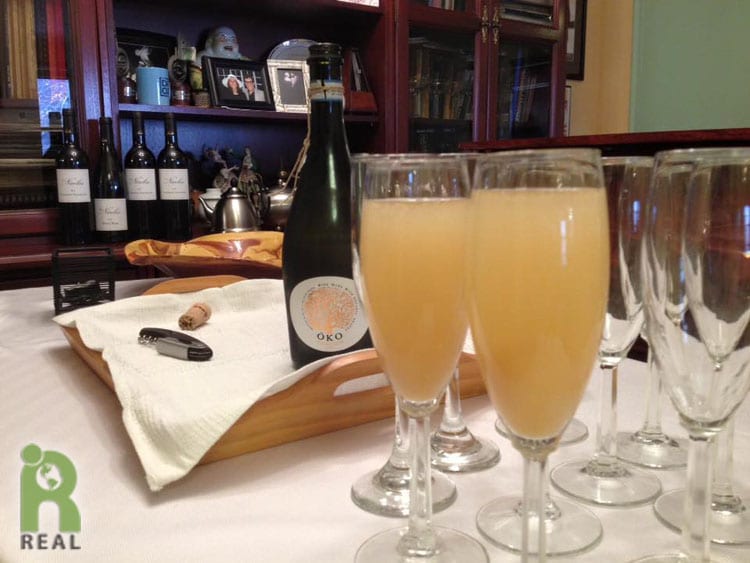 The well-loved drink was invented in Italy in 1948 by Giuseppe Cipriani, head bartender and owner of perhaps the most famous bar in the world: Harry’s Bar, in Venice. (Carpaccio was also invented there by Cipriani as well as Osso Bucco, both of which we’ve veganized in our Christmas Feast.) The shade of pink of the Bellini reminded Cipriani of the color of a saint’s toga in a painting by Giovanni Bellini, hence the name, “Bellini.”

The drink became a seasonal specialty at Harry’s Bar, an institution since 1931 and a favorite of Ernest Hemingway, Sinclair Lewis, Alfred Hitchcock, and Orson Welles. It later became popular in New York, after a French entrepreneur established a means for transporting white peach puree between Venice and New York.

If you can’t make it to Venice for the original, here is a simple recipe that we like:

Add a heaping tablespoon of the puree mixture to the bottom of a champagne flute. Slowly pour in the Prosecco. Tip: Although you can substitute other Italian sparkling white wines such as Asti Spumante Brut for the Prosecco, don’t use champagne as its flavor is not a good match for the sweet peach juice.