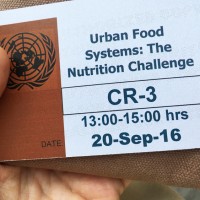 Caryn attends the EATx conference at the United Nations and gives a brief summary of her reactions.

Caryn Hartglass: So I wanted to talk a bit about this EATx conference that I just came from before we move to the second part of the show with my next guest, and that’s going to be a lot of fun. I was invited, and I’m not sure how I got invited, But I’m glad that I got invited. It was an amazing event. There are a lot of things going on at the UN this week and in New York City, especially after we had that little explosion earlier in the week. Security is all over the place. We got the NYPD, and they’re doing a great job. The whole area around the UN is fenced-off and they’re really careful about who they let through. There were big security lines, and I had my pass, and it was very exciting to be a part of everything that was going on. There were all these experts and luminaries and wonderful people doing great things.
I was really looking forward to this conference. It was put on by the Eat Foundation and you can find out more about them at the eatforum.org, and I believe that it’s a Nordic organization. There were a number of different representatives from Stockholm and the Netherlands. Actually, there were people from all over the place, including a speaker from London. We heard a number of very passionate speakers talking about extreme poverty, some of which got choked up acknowledging how many children a day die in their mother’s arms. One speaker said 5,000 in the morning, another 5000 in the afternoon, and 5,000 at the end of the day. The UN has some ambitious goals of eliminating extreme poverty and hunger by 2030. They were lauding themselves by meeting their goal of reducing it in half by 2015 and they achieved that goal in 2012. I kept wanting to hear about animal agriculture but unfortunately, I never did. They acknowledged that we have a tremendous amount of food waste all over the world, especially in urban environments. This conference was focusing on urban environments. They talked about the waste and a little bit of what’s being done about it. Not so much the solution, just what the issues are. There was a discussion about food deserts and people having access to food and the problems that were related to that. But what I really loved was that after we heard 6 speakers, we moved to a panel. Karen Washington from the Rise and Root farm in the Bronx here in New York, I think was the best speaker who authored the most compelling information. She talked about how a lot of areas in the Bronx are called food deserts, which is where people don’t have access to healthy foods; they just have access to unhealthy fast food. She made us all say the word “food desert” and then said, “I never want you to say that word again. It’s not food desert. It’s food apartheid.” She was talking about how the access to food is related to race and culture and poverty and that we need to do a lot more to solve these problems. She explained that talking about food is not enough; we need to integrate and talk about so much more in order to solve this problem of extreme hunger and extreme poverty.
All of that was great and everybody was very passionate. However, I was annoyed a number of times. Dr. Gunhild A. Stordalen was a lovely speaker. She mentioned that old proverb that says, “Give a man a fish and he’ll eat for a day, teach him how to fish and he’ll eat for a lifetime.” and I thought, “That’s an outdated proverb”. Our oceans today are toxic. The fish are dying and so many species are gone. Sustainable fishing is an oxymoron. Anyone who has read Jonathan Balcombe’s wonderful book What a Fish Knows knows that there is a lot of intelligent life in the ocean and we need to have great deal more respect for that. Therefore, teaching a man to fish is not the way to feed this world for a lifetime. Another panelist who was a businessman was talking about one of their projects, which was to create clean milk. He was talking about feeding cows certain kinds of enzymes so that it would reduce and practically eliminate their greenhouse gas emissions. I had chills when I heard it because the only clean milk to me is plant milk, not animal milk. There are so many things that are wrong with animal milk, even if cows did not emit greenhouse gases. There are so many things wrong with exploiting non-human animals and taking their milk from them. We’ll talk about milk in a little while.
I just wanted touch on those things that happened at the EATx conference. What was really frustrating was that I was sitting politely in my seat and taking notes, burning up and getting ready to ask a question, but we ran over. Nobody got to ask any questions! Did they do that on purpose? Did they not want to hear our thoughts from the conference? I don’t know, but I think it was a bit frustrating. They were talking about how we needed to create a food revolution, how we really need to disrupt our food system to make dramatic change. But never did they say that we need to start with a plant-based diet.