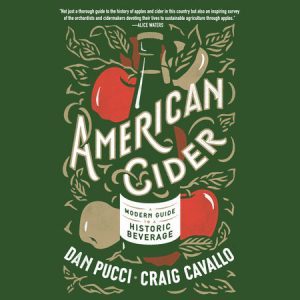 Dan Pucci is one of the nation’s leading cider experts. He was the founding beverage director at Wassail, New York City’s first cider bar and restaurant, and has since traveled the country in a continued pursuit of cider education, awareness, and research. He is a partner in Wallabout Hospitality, a New York City-based consulting and hospitality company.

Craig Cavallo lived in New York City for thirteen years, working in restaurants, blogging about food trends, and writing for Saveur. His work has been published in Condé Nast Traveler, GQ, New York magazine’s Grub Street, Thrillist, and Vice Munchies. He left New York City for the Hudson Valley, and when he’s not at Golden Russet Cafe & Grocery, the café that he owns and operates with his wife, Jenny, he can be found picking fenceline apples and dabbling in his own cellar cider experiments.