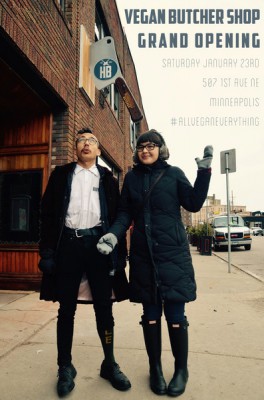 Sister and brother duo Aubry and Kale Walch have spent the last several years perfecting The Herbivorous Butcher’s deliciously deceiving meat-free meats. Aubry has been a vegan for 18 years and has spent over a decade creating meat-free alternatives to many the foods that she grew up with on Guam, a place where cooking was a deep-rooted part of everyday life and each meal consisted of at least two different kinds of meat or seafood, not to mention a wide variety of flavors, spices, and textures, blending Guamanian cuisine with culinary cultures from across the world.

After years of watching Aubry thrive as a strict vegan, Kale Walch followed suit and became vegan. Over the past four years, he has developed a keen sense for the many ingredients and methods that go into making the most flavorful, nutritious and satisfying meat alternatives. Having made the change from omnivore to vegan more recently, he is able to invoke the flavors of his previous “meat palate” to create realistic and tastefully accurate meat-alternatives.

Aubry Walch is President of The Herbivorous Butcher.

Caryn Hartglass: Hey everybody, I’m Caryn Hartglass and you’re listening to It’s All About Food. How are you doing today? It’s a really, really really chilly day here in New York City today, 28 degrees right now. It’s even cold inside, but baby it’s cold outside. And I just got some good news I want to share with you. You know I’ve been having this crazy problem with my MacBook Pro since early August. It’s an early 2011 model and the logic board keeps giving me these video issues, it’s covered after some kind of extended program with Apple, and I just found out that, after I brought it in again, for like the fourth billionth time since August, I got my third new logic board! And, I’m hoping that this one isn’t rejected by my machine, because it’s very time consuming, and when you live online all the time, it’s really problematic when your computer goes bad. And the only reason I’m bringing it up is because it is kind of related to food because, it’s an Apple. Hahaha!

Caryn Hartglass: Okay, now we have to move quickly here because my guests are limited in their time and I want to bring them right on. We’re going to be speaking with Aubry Walch, who is the president of a very new company called The Herbivorous Butcher. She and her brother have created it, and we’re going to hear a lot about it. It’s launching, it’s opening is this Saturday. Welcome to It’s All About Food, Aubry.

Aubry Walch: Hi, how are you doing?

Caryn Hartglass: Good, I’m so appreciative of this time. I know you’re opening in four days and it must be crazy!

Aubry Walch: Yeah, things are pretty nuts right now, that’s for sure. We’re working around the clock to make sure we have all the food.

Caryn Hartglass: Okay, so tell us a little bit about The Herbivorous Butcher. If we head to Minneapolis, what can we expect, starting Saturday?

Aubry Walch: Well this Saturday, in particular, you’re going to walk into an old-fashioned butcher shop. People behind the counter wearing their hats, white shirts, white aprons, it’s going to feel like the 1950s. The only difference is, when you look in that meat case, there’s not going to be anything with animals in it. Everything is made with plants, from the steaks to the sausage to our pulled pork.

Caryn Hartglass: Now this location that you’re in, was it originally a butcher shop? Or was it something else?

Aubry Walch: No, it was actually called City Salvage; it was a salvage, furniture, and miscellaneous type store. So it’s just really big, empty shelves.

Caryn Hartglass: Okay great. I’m very excited about this. My partner, Gary, and I had imagined, a number of times, a vegan butcher shop, and now it’s finally happening! [laughs]

Caryn Hartglass: Now I know your brother, Kale, isn’t joining us, but can I just ask you about his first name?

Aubry Walch: Yes! We actually – being from Guam, they don’t import vegetables like kale, at least they didn’t in the early ‘90s. So when Kale was born, we didn’t even know it was a vegetable until we moved to the United States. And then we were at the grocery store, and we thought, “oh my gosh! This is cabbage.” So then Kale grew up with my mom telling him that kale was the strongest vegetable in the garden.

Caryn Hartglass: Hahaha! Well that’s great! It’s such a perfect name! And I like to say there’s nothing kale can’t do. And you’re proving that right now, there’s nothing Kale and Aubry can’t do with this new Herbivorous Butcher. And what I like is that you’re really bringing life and new meaning to the word “butcher.”

Aubry Walch: Yeah, what we like to say is, it’s time that old-timey butchers that slaughter animal herds, they had their time and it’s our time now for butcher shops to be plant-based. So as far as I’m concerned, plant-based butcher shops, we’re taking the word “butcher” with us.

Caryn Hartglass: Okay, now you’ve been a vegan for a long time, is that correct?

Caryn Hartglass: Wow, good for you. And what was the turning point for you? To give up animal foods?

Aubry Walch: Yeah, I was 14 and bagging groceries at a grocery store and watching all that meat come through the register, and it sort of struck me that that was living at one time, and I decided that I didn’t want to put any more pain out into the world and I didn’t need it to sustain myself and to be happy, so I just stopped.

Caryn Hartglass: Great. And I love it when siblings kind of get the message and join in a good thing.

Caryn Hartglass: [laughs] I have an older sister and a younger brother, and they’re both vegan, too, so –

Caryn Hartglass: It definitely makes family gatherings a lot easier when you’ve got safety in numbers.

Aubry Walch: Oh, does it ever, it’s so much nicer.

Caryn Hartglass: Okay, so what are your challenges in the next few days, if you don’t mind me asking?

Aubry Walch: I think just making sure we can make enough food to satisfy everyone this weekend. One promise we made to our customers when we decided to open this, was that we would never run out of food again. We’d been running out of stuff every single weekend. So, just making enough to keep our promise.

Caryn Hartglass: Okay, and do you make all of your meat products?

Aubry Walch: Yeah, yes, we make them all by hand. Every single sausage is hand-rolled.

Caryn Hartglass: [laughs] Are they soy-based, seitan-based, a little of everything?

Aubry Walch: Yeah, we like to call it “strategic seitan.” So it’s a basic seitan recipe, and we dress it up. We use a lot of different juices, different flours, we use seeds and spices, and then they’re cooked in different ways to achieve the texture and flavor that we’re looking for.

Caryn Hartglass: And, had you been selling these foods before opening this store?

Aubry Walch: Yeah, we were at the Minneapolis Farmers’ Market for a summer, and that did really well and took off, and after that, we started doing other farmers’ markets and pop-ups at different breweries, and our customer base got bigger and bigger, and more people were willing to try it, and that’s what brought us to where we’re at now, with this shop.

Caryn Hartglass: Great, so those were the places where you’d always run out.

Aubry Walch: Yeah, yes, exactly. We were cooking out of a community kitchen where you had to book time by the hour and we didn’t have as much time as we could’ve used.

Caryn Hartglass: Yeah, but well – it’s been a good dress rehearsal for you; so now you’re ready to open on Saturday. I’m so excited for you, and Minneapolis is a great place. It’s a very forward-thinking place when it comes to food, so I’m sure you’ll get a lot of great support.

Caryn Hartglass: And so, you’re originally from Guam?

Aubry Walch: Yeah, yup, born and raised, and moved to the United States when I was 13, and Kale was 6 months old.

Caryn Hartglass: I don’t know anything about Guam. What are some of the local foods there?

Aubry Walch: The food on Guam is a combination of Spanish food and Japanese food and Korean food and Filipino food, it’s just all these different cultures that have come to the island over the years. Some Guamanian food is – we use a lot of soy sauce, and vinegar, and peppers in our food and so it’s just these flavors, incredible flavors that go really well on a grill. So that’s kind of what spurs a lot of different recipes we use now. For example, our porterhouse steak we like to marinate in our Chamorro marinade.

Caryn Hartglass: Great, so we’ve got this Guamanian vegan cuisine going on.

Aubry Walch: Yeah, with a couple things, but we definitely stay pretty true to a lot of the American favorites.

Caryn Hartglass: Okay, I know you have to go soon. Just give me an idea of what’s on your menu, and get our mouths watering for what we might – if we walked in, what we could order.

Aubry Walch: Yeah, absolutely. We’re going to have a lot of our heavy hitters this weekend, we have our porterhouse steaks, which are more or less a blank palate, you can marinate it in whatever you want, grill it, or fry it up in a pan. We’ve also got a couple of our breakfast sausages; we have our maple sage breakfast sausage as well as our all-American breakfast sausage, which is very spicy. We’ve got sriracha brats; we’re going to have pulled pork, which is our gluten-free product. We’ll have our Korean ribs, which is our most popular product right now. We’ll have a lot of different cheeses, from Camembert to earth-smoked cheddar to our best-seller, the dill Havarti, and the pepper jack.

Caryn Hartglass: So you mentioned the Korean ribs – do they have a bone in them?

Aubry Walch: Nope! There’s no bone in there.

Aubry Walch: We cover them in tapioca flour and brown sugar so they crisp up really nicely when you put them in a pan.

Caryn Hartglass: Mm sounds good. And is there any place to eat inside, or this is solely for pick-up?

Aubry Walch: Yes, this is – we’re just a butcher shop. We’ll have a hot lunch special once we get going, but you just come in after work or on your lunch break, pick up your custom meat you need and cheese you need, and you’re on your way.

Caryn Hartglass: Okay, that sounds really good. I know you have to go, so if you want to add anything, now’s the time.

Aubry Walch: Well, I think, just check us out online, we’re at www.theherbivorousbutcher.com and our Facebook page, which we like to put a lot of really fun videos and pictures up, so it ends up being a pretty funny time.

Caryn Hartglass: Great, well I’m so excited for you, and I hope it’s a big success and that you take over all the butcher shops everywhere on the planet!

Aubry Walch: Oh yeah, that’s the plan! Thank you so much, Caryn, for having me today.

Caryn Hartglass: Thanks for joining me on It’s All About Food and send my best to Kale, too.