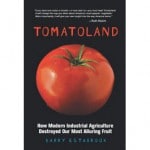 Stints working on a dairy farm and a commercial fishing boat as a young man convinced Barry Estabrook that writing about how food was produced was a hell of a lot easier than actually producing it. He lives on a 30-acre tract in Vermont where he gardens, tends a dozen laying hens, taps maple trees, and (in an effort to reduce his alcohol footprint) brews hard cider from his own apples that no one except him likes. He was formerly a contributing editor at the late lamented Gourmet magazine. He now serves on the advisory board of Gastronomica, The Journal of Food and Culture, and writes for the New York Times, the Washington Post, TheAtlantic.com, MarkBittman.com, Saveur, Men’s Health, and pretty much anyone else who will take his stuff. His article for Gourmet on labor abuses in Florida’s tomato fields received the 2010 James Beard Award for magazine feature writing. His book Tomatoland, about how industrial agriculture has ruined the tomato in all ways–gastronomic, environmental, and in terms of labor abuse– was recently published by Andrews McMeel