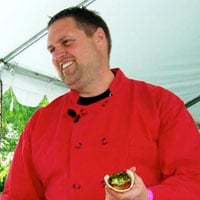 Chef Jason Wyrick is the executive chef of The Vegan Taste, a cooking instructor, caterer, a former diabetic, and founder of the world’s first vegan food magazine, The Vegan Culinary Experience. He has co-authored the New York Times bestselling book 21-Day Weight Loss Kickstart with Neal Barnard, MD, and has taught alongside many medical and dietary professionals. Jason was the first vegan culinary instructor in the world-famous Le Cordon Bleu program through Scottsdale Culinary Institute, and has catered for many corporations. Jason has taught hundreds of vegan cooking classes around the world, and his work has been featured in the New York Times, Vegetarian News, and on both local and national television. His website is thevegantaste.com.