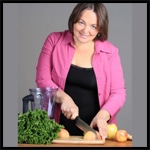 Victoria Boutenko is an author, teacher, inventor, researcher, artist and mother of three. She teaches classes on healthy living and raw food all over the world. As a result of her research and teachings, thousands of people are drinking and sharing green smoothies.

Victoria Boutenko is an author of 12 Steps to Raw Foods, Green Smoothie Revolution, Raw Family Signature Dishes and Green for Life. Green for Life is an award winning, international best seller which has been translated into 26 languages with over a quarter of a million copies being sold world wide.
– See more at: http://www.rawfamily.com