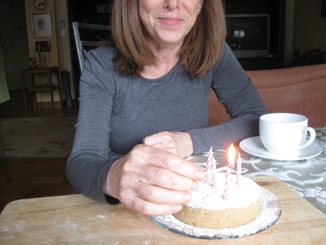 Between the Fourth of July and Bastille Day, another celebration is taking place in this hot month of July, right here in my apartment in New York City — Today, Wednesday, July 13, I am celebrating four years cancer-free. It was a harrowing time for me, when on October 3, 2006, I was diagnosed with advanced ovarian cancer and 10 months later on July 13, 2007, I went in for what I’d hoped would be the final surgery of three to rid my body of the deadly disease. Here I am, on July 13, 2011, four years later to proudly say it worked. Now I’ll bet you are asking yourself, define “it”? Glad you asked.

I’ll never know why I got cancer, although I have my theories.  What I do know is this – I was determined to live and I was in no mood for a pity party. As a matter of fact, I was angry! How could I, me, the über vegan food cop of not only my social circle but everyone I came in contact with be stricken with cancer? So I started my warrior-like regiment of strengthening my body because I knew the chemo was going to do its best to destroy it.

Through this trying time I learned that conventional medical treatment was not enough to beat the disease.  Just to survive 3 major surgeries in less than one year and two 4-month-long rounds of aggressive chemotherapy required something much, much more.  It was a nutrient dense diet, meditation and love from my family and friends that made the difference.  But luckily for me, information on nutrition and healthy living was at my fingertips.   During this time, I was the Executive Director for Earthsave International, the organization founded by John Robbins, which was all about healthy living and lifestyle.  I shared information with so many people on a daily basis, that a plant-based diet is not only the most sustainable way to save the planet, it’s the healthiest way to eat – and can save your own life. For more than two decades I had compiled information from many sources.  I reviewed much of it along with new information, weeding out what was unsubstantiated; highlighting what was useful and made sense. And then I applied it to my own life — religiously.

I read many stories about people with spontaneous remissions, people who defied the medical establishment’s death sentences by living and conquering their illnesses.  These accounts are often thrown off as mere ‘anecdotes’ – stories with no scientific basis and therefore not worthy of attention.  This is exactly what I focused my attention on!  As an engineer, I knew you could not throw away a data point without a very good assumption.  We are so far from winning the war on cancer; I wanted to learn from those who had won on their own.

The doctor, who operated on me during my first surgery, could not get over how “clean” I was inside and he wanted to know more about my diet. He even became a member of EarthSave. Yes, I did have a very large mass of ovarian cancer.  But it was isolated.  I believe that this cancer was in me for a very long time and my body was dealing with it, protecting me for as long as it could.

When going through chemotherapy at the Block Center in Evanston, Illinois, my doctors were amazed at how well I was managing.  I did have symptoms, fatigue, slight nausea from time to time, and lightheadedness when my red blood cells were dropping.  But overall, I did very well – “sailed through it” were one of my doctor’s words. All through the surgeries and chemotherapy I continued working, running EarthSave and living my life.  I spent some time in California and performed in a production of Side By Side By Sondheim while on chemo.  And I gave some casual performances singing for the other chemo patients at the Block Center while I was being infused.

Many people are so sick from chemo they can not eat and lose a lot of weight.  I took nutraceuticals (mostly food-based supplements) during the period I was being treated.  These were recommended by the Block Center, some with anti-cancer fighting properties, others reduced inflammation and some prevented nausea.  It cost me almost $1000 a month, an expense that was not covered by insurance.  I gained the weight back that I had lost in surgery and from the wasting done by the cancer.  At a visit with one of my oncologists he asked me how I was doing with the chemotherapy and I said I was gaining weight.  He told me with a smile “weight gain is NOT a side effect of chemotherapy.”

The medical community did their part, removing and destroying the cancer in me.  But it was up to me to do the rest, in order to heal, survive and thrive.

Now I want to share this information that was lifesaving to me and that’s why I founded this new 501(c)(3) nonprofit organization, Responsible Eating And Living.  We are adding new content all the time: weekly podcasts, videos, recipes and articles that will help people – not only those diagnosed with cancer and other chronic diseases like heart disease and diabetes but everyone who is interested in living a long, healthy, energetic life and cares about the health of the planet.  Using a common sense approach, I want to show that the lifestyle I am promoting is not only healthy and environmentally-sustainable but a joyful experience as well.

4 comments for “Life is Tremendous!”