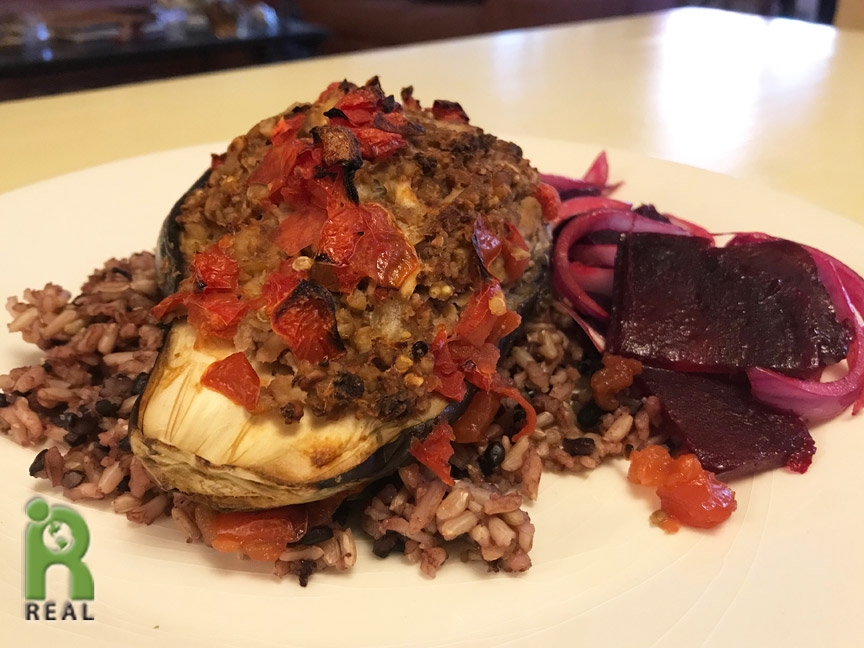 I recently interviewed Ralph Nader on IT’S ALL ABOUT FOOD about The Ralph Nader and Family Cookbook, Recipes from Lebanon and Beyond. There are many vegan recipes in this book and then there are some that aren’t. I was quickly veganizing the nonvegan recipes in my head as I reviewed them, thinking I would make them at some point. This is the first recipe that I have made and veganized, Sheikh Al-Mahshi, the king of stuffed food. Normally made with lamb, I substituted tempeh. It also calls for pine nuts. We did not have any and I was not about to run out to the grocery store during the stay-at-home order for COVID-19. I used walnuts instead. I also prepared a simpler dish in the cookbook, Beets with Onions, to serve with it. We really enjoyed these dishes. The original eggplant recipe serves 6 and called for 4 eggplants. I only had one eggplant. My revised recipe serves two.

PREPARE THE EGGPLANT
Wash and trim stems from the eggplant. Partially peel in alternating 1-inch strips, leaving half the skin on. Cut eggplant in half lengthwise and steam over medium heat in a covered saucepan for 15-20 minutes until the skin is soft enough that you can indent it with a poke.
Spread a thin layer of olive oil in a baking pan large enough to fit the two eggplant halves. I used a glass pie plate. Place eggplants in the pan and allow to cool before stuffing.

PREPARE THE STUFFING
Thoroughly combine the grated tempeh and onions. Cook this mixture in a fry pan with cinnamon over low heat. Add a couple of tablespoons of water at a time if the mixture starts to stick. Add the walnuts after 5 minutes. Cook for 10-12 minutes more. Remove from heat.

PREPARE THE COMPLETED DISH
While the stuffing is cooking, gently boil the fresh tomatoes in an uncovered saucepan with 1/2 cup of water. I used the same water I steamed the eggplant with.
With the back of a wooden spoon, press the eggplant flesh in to allow space for the filling. Firmly stuff the tempeh filling into the eggplant boats until full.
Place about half of the tomatoes on top of each eggplant boat. Spoon remaining tomato/broth mixture around the eggplant boats.
Bake, uncovered, at 350oF for 30-50 minutes.

SERVE THE EGGPLANT
Remove each boat from the pan and serve on a bed of rice. We like to make a whole grain blend with brown rice, black rice, red rice and millet.