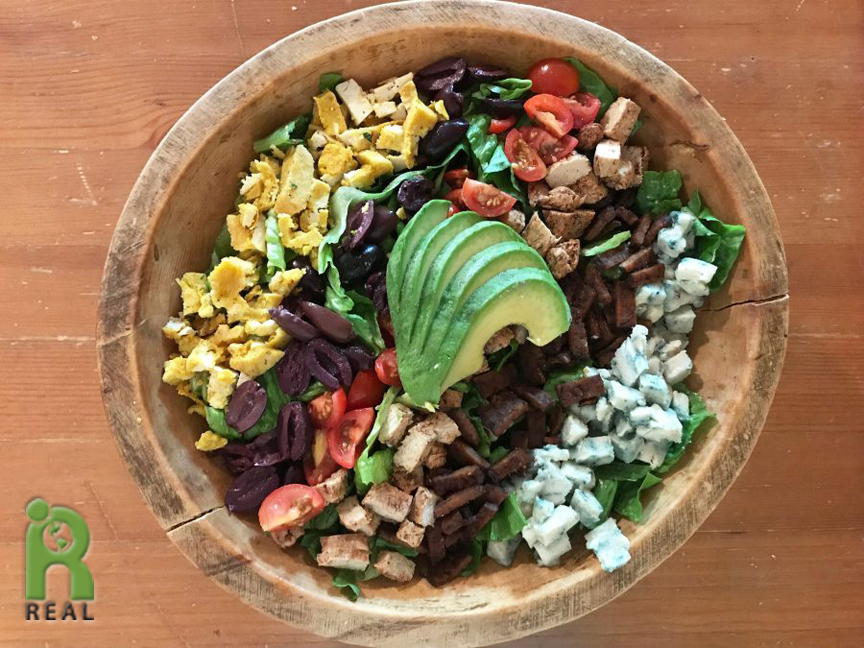 The story behind the origins of the Cobb Salad varies slightly, depending on who you talk to or what cookbook or online source you get your recipes. Most will agree that it was named after Robert Cobb, the owner of the famed Brown Derby Restaurant. Legend has it that one latenight Mr. Cobb realized that he had not eaten all day and he was starving, so he went into the kitchen and made a giant salad from some of the leftovers that he found in the refrigerator and tossed it with a vinaigrette dressing. He enjoyed it so much that he put it on the menu the very next day, and the rest, as they say, is Hollywood history. Today there are a few vegan versions served but not like the ones I remember eating before I went vegan at restaurants like Perry’s in San Francisco or MacArthur Park in Palo Alto. Those were typically made like the original— on a bed of chopped romaine, displayed with colorful rows of diced tomatoes, crisp chunks of bacon, cubes of chicken breast, chopped hard-boiled eggs, sliced avocado, chopped olives, crumbled blue cheese, and served with a a tangy red-wine vinaigrette. So I invented, or should I say, reinvented my own plant-based version of the Brown Derby Cobb Salad. I was able to find many of the vegan ingredients in upscale grocery stores so most of it was pretty easy to reconstruct. Although, I did need rethink the hard boiled egg component and I came up with a simple garbanzo bean flour frittata which is a staple in our house and is great on its own or chopped up and used in salads. I included the recipe for that, too. All cooked ingredients can be made ahead of time and refrigerated so you can have your own midnight raid on your refrigerator. This recipe makes four main-dish sized salads or one giant Mr. Cobb sized salad.
— Gary De Mattei

Chop the romaine (or other dark leafy greens), wash thoroughly and spin dry in a salad spinner or on a clean dry towel. Set in the refrigerator to crisp.

Chop and prepare the remaining ingredients. (See below)

If you are making individual Cobb salads, chill four large dinner plates or salad bowls. Evenly divide the lettuce on to each plate. Then top the salad with separate rows (or mounds) of a ¼ cup each of the remaining ingredients. Serve with a side of your favorite red wine vinaigrette.

Preparing the Gardein Chick’n Strips.
Preheat oven to 375ºF. Line a sheet pan with ovenproof parchment paper. Arrange the frozen strips of Gardein on the sheet pan. Brush both sides of strips with olive oil. Bake for 4 minutes. Remove from oven and turn strips. Bake for another 3 minutes. Remove from oven and sprinkle with salt and pepper and set to one side.
NOTE: Most frozen food sections of your local grocery store carry Gardein Chick’n Strips, however, they will come with a packet of sauce like teriyaki. DO NOT ADD THE SAUCE TO THE STRIPS.

Preparing the Fakin’ Bacon.
Preheat oven to 375ºF. Line a sheet pan with ovenproof parchment paper. Arrange the frozen strips of tempeh bacon on the sheet pan. Brush both sides of strips with olive oil and sprinkle lightly with smoky paprika. Bake for 4 minutes. Remove from oven and turn strips. Bake for another 3 minutes. Remove from oven and set to one side to cool to room temp or refrigerate if preparing ahead of time.

Simple Frittata
This frittata can be eaten hot for breakfast or cold at midnight. It is used cold and chopped for our NEW CLASSIC COBB SALAD recipe.

If you aren’t using this recipe for our Cobb Salad you can add a half cup of your favorite cooked vegetables like sautéed peppers and onions, or mushrooms— use your imagination for your own variation. Use your imagination, it’s fun to be vegan!

Drain the tofu. Wrap it in a clean kitchen towel and gently press it, squeezing out all of the excess water. Crumble the tofu and spread it on the bottom of the prepared dish.

Put the garbanzo bean flour, turmeric, salt and pepper in a medium bowl. With a wire whisk, beat the ingredients until they are incorporated. Then add the water and continue whisking until the mixture is the consistency of heavy cream. Pour the batter over the tofu and bake in the oven for 30 minutes or until the sides of the frittata begin to pull away from the dish.

Directions:
Smash the clove of garlic and rub it on the inside of a mixing bowl. Add in the vinegar, mustard, salt and pepper and whisk together. Pour in the oil in a thin stream and whisk until emulsified. 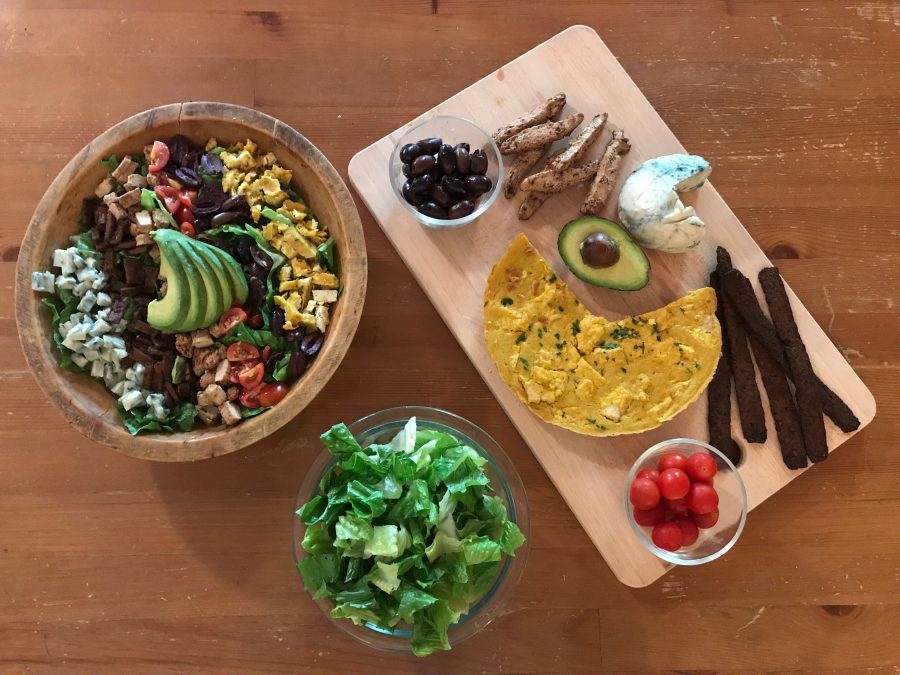