Breakfast: I often crave something savory rather than sweet for breakfast. That’s when leftovers come in very handy. This morning’s breakfast was easy – grilled polenta and spicy tomato sauce from the day before, along with Genmaicha tea. 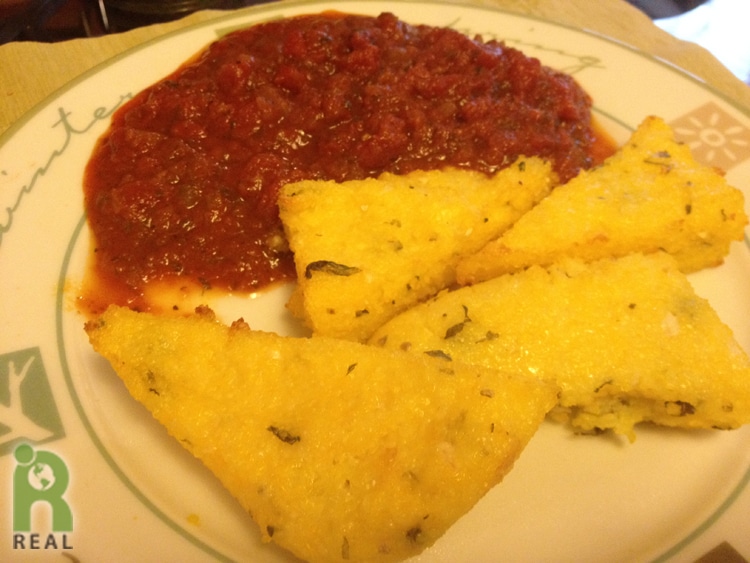 I visited the Seed Market at the Altman Building in Manhattan. This is a pop up market of plant-based products put on by Pas Niratbhand of The Seed Experience. It’s so inspiring to see many small plant-based businesses today that did not exist a decade ago. I used to produce the biggest vegan festival for 5 years in New York City from 2002 to 2006 called the Taste of Health. Its purpose was to introduce people to the benefits of a plant-based diet. We had great speakers, food demos, exhibitors, music and fabulous vegan food and we provided an opportunity for small vegan businesses to promote their products. It was FREE, an all-day, outdoor, vegan extravaganza on the Lincoln Center Campus that took place annually on a hot June day and 5000-10,000 people attended each year.
Here’s a brief clip on that event from 2003:

Looking back, I see the seeds I planted back then and it’s rewarding to see what has sprouted over time. I appreciate the hard work of people, like Pas Niratbhand, who organize events like these today.

Since this is a blog of what I eat, I will share some of the samples I tasted at the Seed Market. Here’s a quick tour of the space:

First I got a shot of green juice from Foxy Greens. They were happy that they had sold out all their juices for the day and given away most of the sample. I was lucky to get my swallow!

The next sample I tried was at Pierre’s Spicy, a Harlem-based company that makes peanut butter and almond butter spiced up with flavors inspired from Haiti. 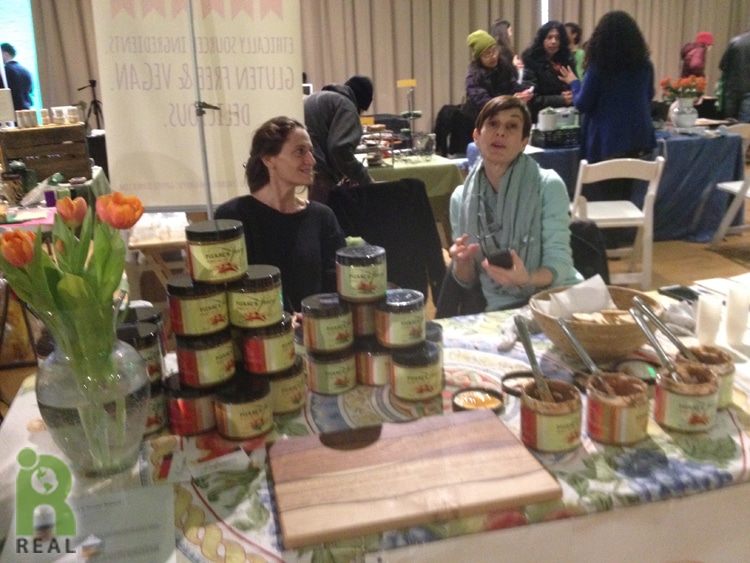 Tamerlaine Farm, an animal sanctuary also bottles up some tasty pepper sauces that were for sale. They were amazing, red pepper-based thick spicy sauces, like a ketchup, with delicious, unique flavors. 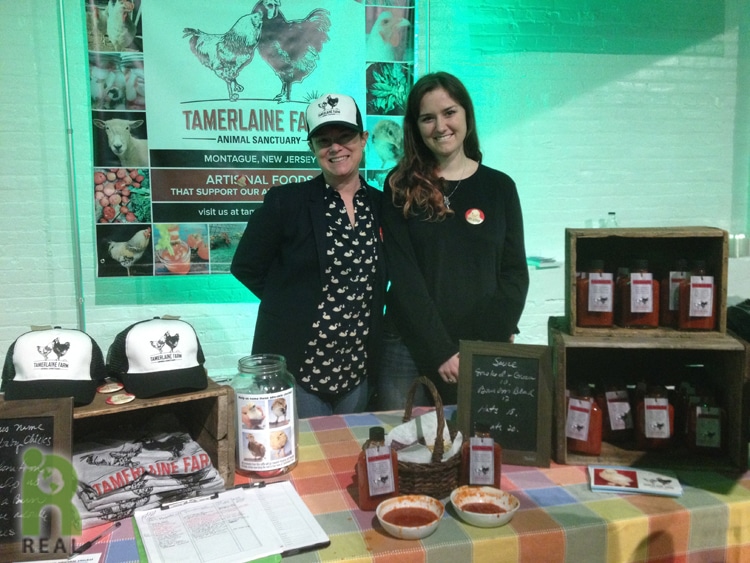 Then I learned about Moringa. According to their website: “Moringa oleifera, also known as the drumstick tree or horseradish tree, originates from the Himalaya-region in northwest India, but is now also cultivated in various countries across Asia, South America, Africa and in the Caribbean. It is a fast growing tree widely appreciated for it’s high nutritional value, believed to be the highest of any plant in the world.” Wow that’s a mouthful. I tried the powder mixed with apple and cucumber juices and really didn’t taste anything unusual. This is one of those superfoods that claims to solve all ills. It’s green, so I like it. The company supports Fair Trade and is working on becoming certified organic. 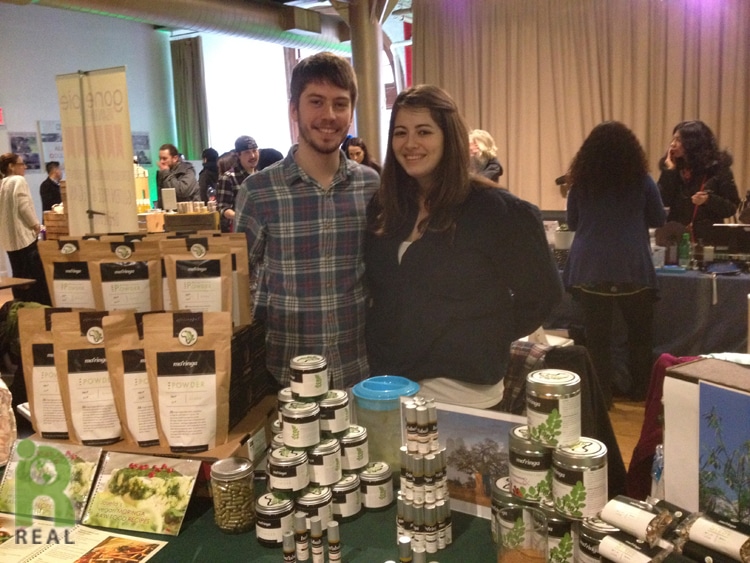 I did’t get to try them but I was glad they were there – Freakin’ Vegan with Vegan Empanadas! 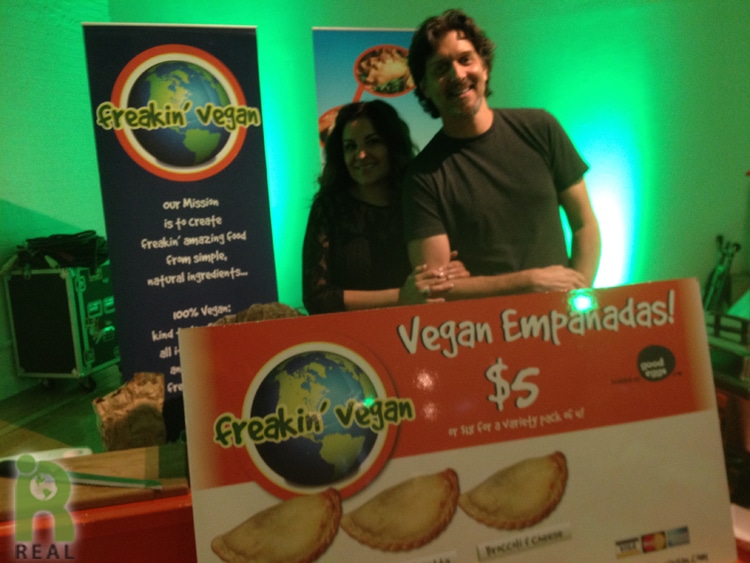 The world of vegan cheese continues to grow and improve. Cheezehound is an upstate New York based company and the owner, Lori Robin sources her macadamia nuts from Hawaii and her fine cheese wrapping paper from France. I came to the event late in the day and there were only two cheeses left to sample, which I did. The texture was very smooth, like Brie (as I remember it, over 30 years ago!) One cheese had a strong cumin center so I could not really taste the cheese. The other was more mild. It was tasty but it did not have a cheesy tang or aged flavor. I look forward to more from the Cheezehound. 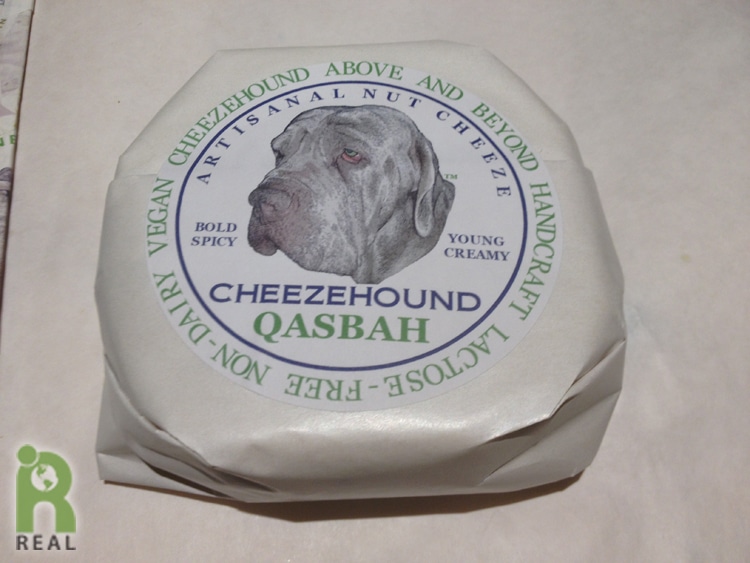 There were products I did not eat, because they were skin products, creams, lotions, soaps. But they were all made from simple plant ingredients so as the folks at Taproot said, don’t put anything on your skin you can’t eat. Their products sure looked and smelled delicious! Body care products were in abundance from I~AM and Kenza made with organic Argan and prickly Pear Seed oils. I got a lovely smelling sample of Lemongrass Butter from inYanga that I am looking forward to enjoying all over my skin! 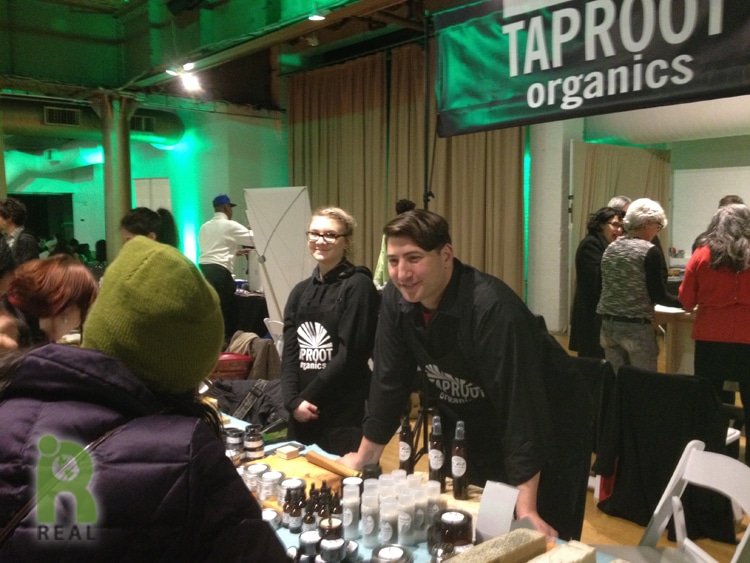 Dinner: Meanwhile, back at Responsible Eating And Living Headquarters, multitasking was the main event with the 3rd Episode of REAL Good News in Review in post production and dinner being prepared. Editing a film takes a lot of energy and focus and with the headphones on, you can’t hear oven timers going off. Or did that oven timer even get set? Hmmm. Part of the dinner, leftovers being reheated to be re-imagined into a new and exciting meal sensation, were slightly overcooked. Oops. No, this is not what Gary served. 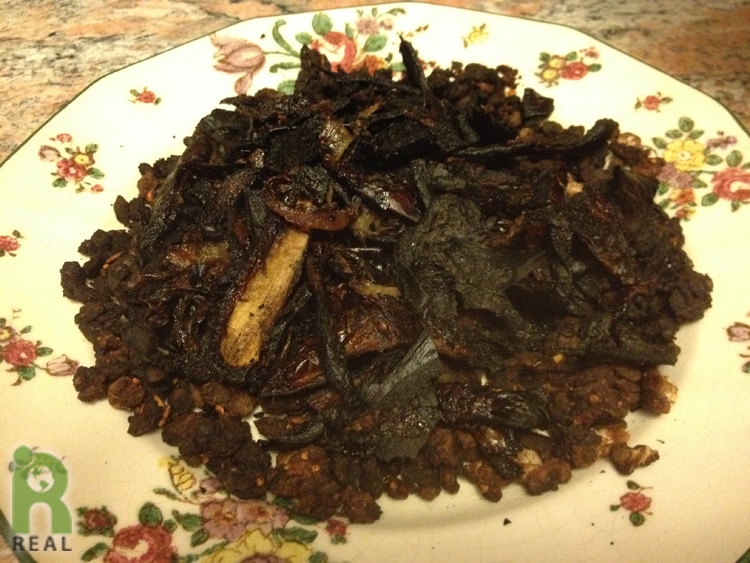 Fortunately, I had prepared some mung beans cooked with onions and spices the day before and Gary made some organic brown Basmati rice and reheated the spicy tomato sauce he made a few days before. It was the kind of simple dish I often crave. I enjoyed it with my Daily Green Juice of kale, collards, celery, carrots and lemon. 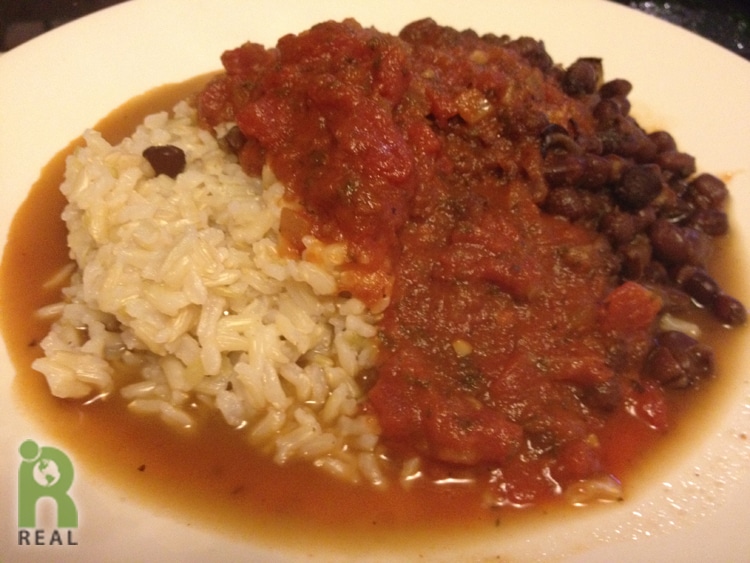 Evening: With lots more editing to go we filled up on more beans, rice and sauce to stay energized. Rooibos Vanilla Almond tea capped off another productive day.