Breakfast: One of the reasons the hotel I was in was selected was for the breakfast. They served Steel Cut Oats with Dried Fruit and Fresh Berries. They also had Soy Milk which I had with Earl Grey Tea. 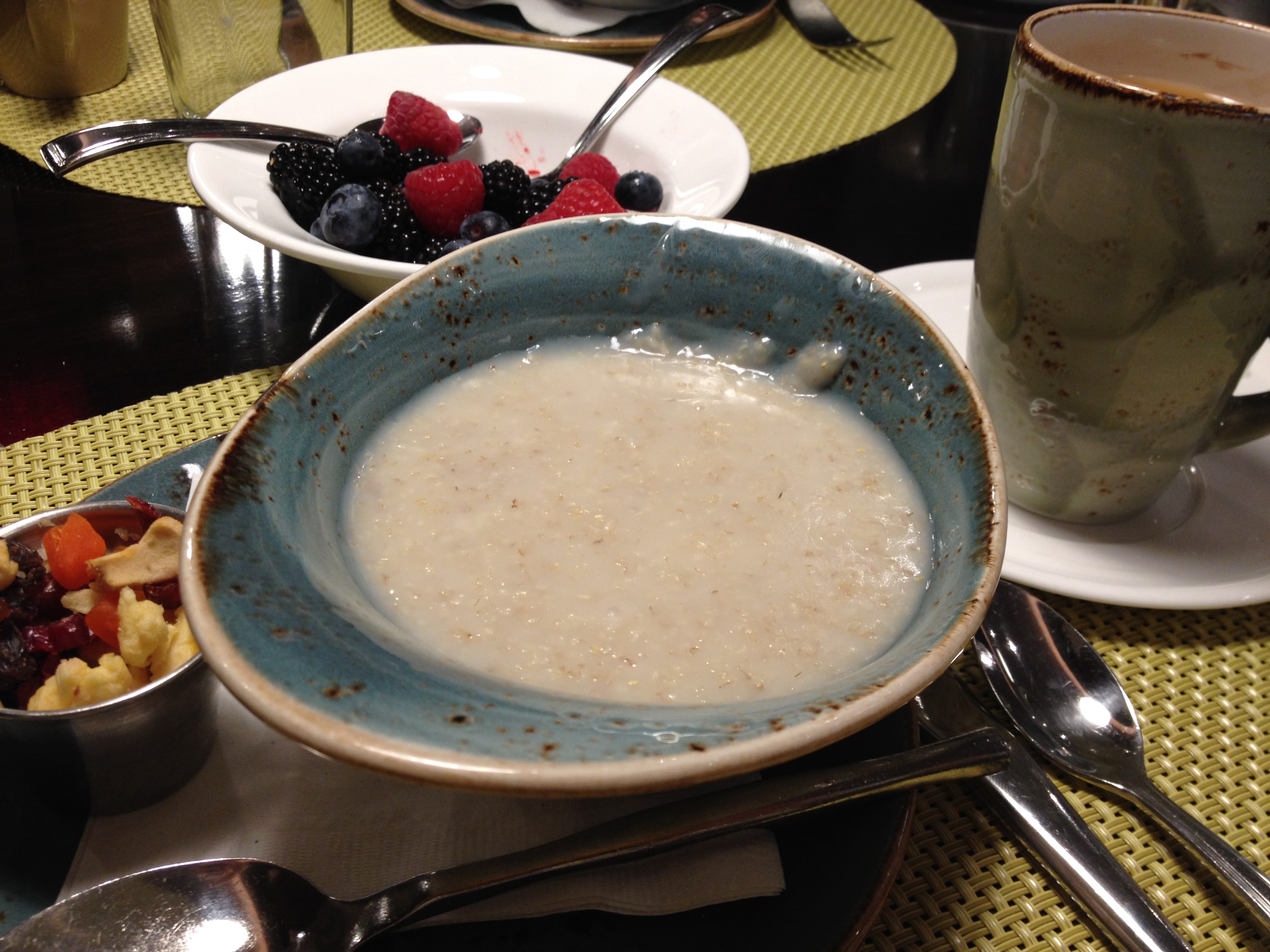 Lunch: With appointments all day at a clinic, I stopped to make lunch with the supplies I had bought the day before. There was a kitchen at the facility I was at where I helped myself to Balsamic Vinegar and a sheet of Nori. I made a Mixed Green Salad with crumbled Nori and Sliced Strawberries tossed with Balsamic Vinegar. 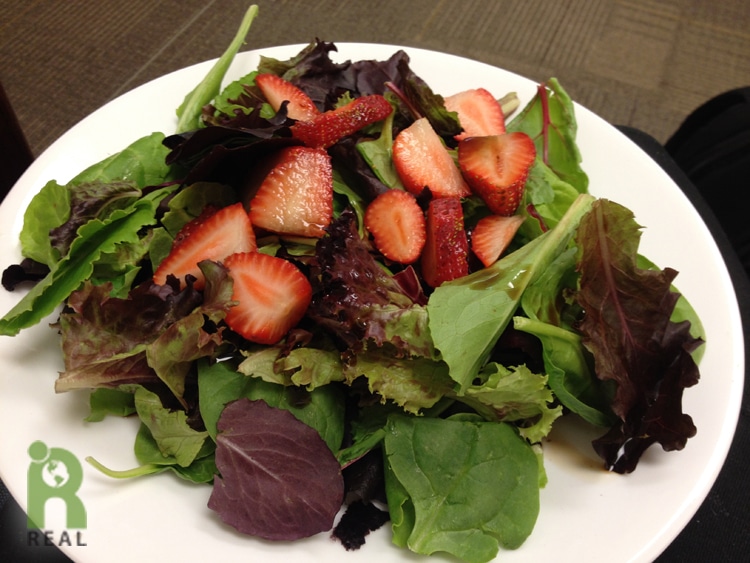 Afterwards, it was a variation of Ants on a Log: Celery Sticks with Peanut Butter, dotted with Blueberries. 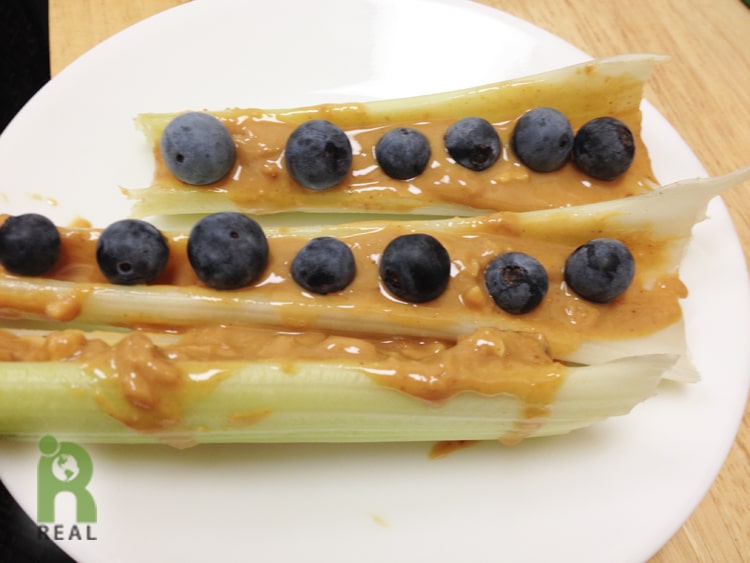 Dinner: Back at O’Hare airport I hunted for vegan food. A woman from India stopped with her daughter at Manchu Wok and asked the question I was about to ask, “Are the vegetables vegetarian?” “No.” was the reply, “They are made with chicken broth.” I thanked her for asking the question and grumbled with her about the vegetables not being vegetarian. She had a $10 voucher from the airline since her flight had been canceled and she offered to share it with me. I pointed to a place that made salads to order for $9.95. I thanked her for her generosity and declined since, one salad would easily use up her voucher. Then I continued the hunt. I walked through three concourses in the terminal I was in. I figured it was my exercise for the day. At La Tapenade Mediterranean Café they had containers of White Beans with Rosemary but the Sodium Benzoate it came with was not appetizing. I was happy to see that the Fresh Market on the Go had a packaged Tofu Meal, and a packaged Veggie Chicken Meal. But looking at the labels, I was not hungry enough for hydrogenated vegetable oil, and although vegetarian, glucono delta lactone, an ingredient used in tofu manufacturing, just turned me off. 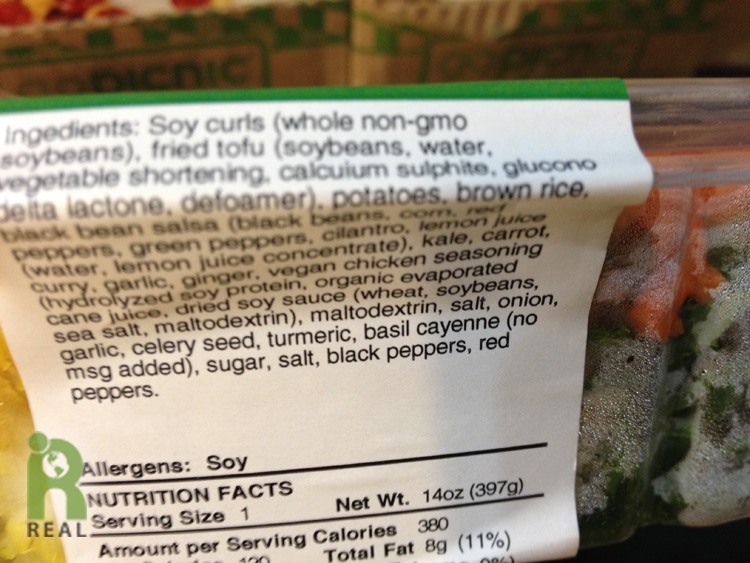 In my bag I still had plenty of Mix Greens, Celery, Cherries, Strawberries and Baked Sweet Potatoes. Why was I looking for anything else? I found a seat in the crowded airport with many flights delayed, including mine, and had a delicious feast.
Evening: My flight landed in San Francisco at 1:40am. Gary picked me up and brought me “home” to his sister’s house where we are staying in San Jose. I was ravenous but didn’t want to eat so late at night. I had a little of the leftovers from Gary’s Dinner – Spicy Tofu with cousin Nancy’s garden-grown Zucchini. We each had a small amount of Vanilla Soy Creamy and went to bed. 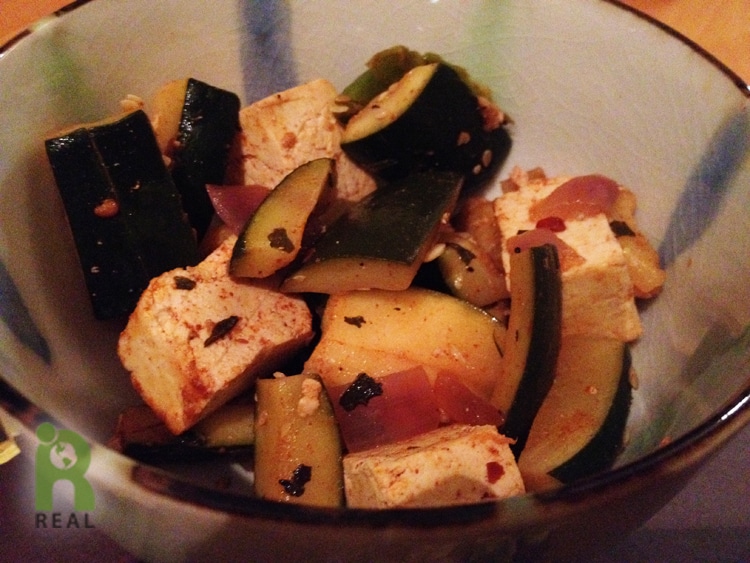