Breakfast: Gary’s play reading would be later this evening, an Actor’s Equity Showcase at HB Studio, called Time to Go. It was written by Daniel J. O’Donnell and directed by the Mr. George Morfogen. There was a lot to do before then. We got up early and met with our old friend Laura who was in Manhattan for 20 hours! She came in the night before to see Sunday in the Park with George on Boradway. Gary and I both performed with Laura when we all lived in California. Laura and I were in Into the Woods and Sunday in the Park together and she and Gary performed in Merrily We Roll Along and Nine. We met at Le Pain Quotidien and reminisced about the old days and got up to date on the current ones. I ordered the Acai Bowl and it was fabulous. I indulged and also ordered a Hazelnut Flute. Le Pain Quotidien has some marvelous dishes. It’s fun to have the table cluttered with teapots and cups and differently-shaped platters. 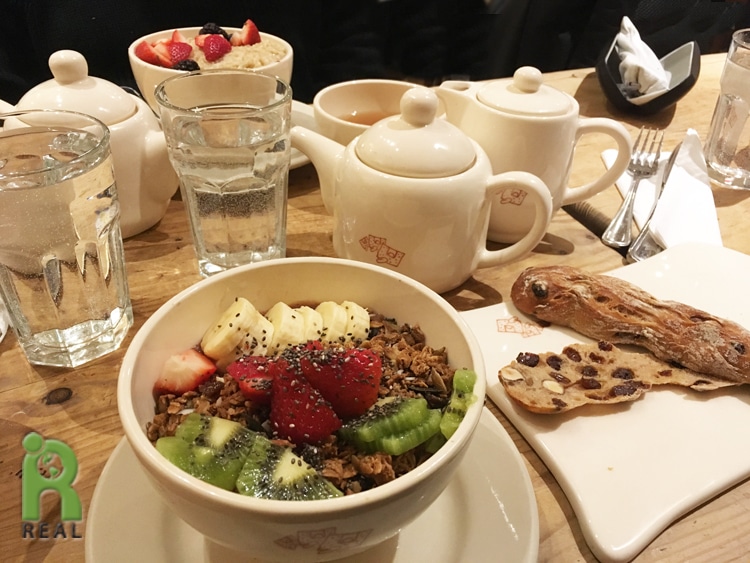 Gary got the Steel Cut Oats (it was huge and he couldn’t finish it) along with Raisin Bread. 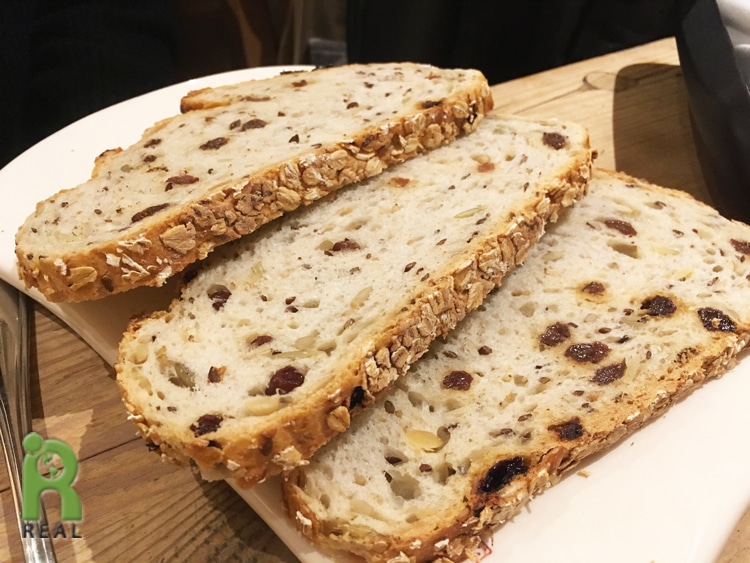 After breakfast Gary and I walked from Bryant Park to the Village. It was a gorgeous day. Before going to his rehearsal at HB Studio, Gary pointed out some places he thought I might want to check out while he was at rehearsal, including the vegetarian restaurant The Butcher’s Daughter. He left me by a cute, little StarBucks.

Tea Break: I had a spectacular day. It was so relaxing! I sat in the sun on a bench in front of that Starbucks, reading Will Bonsall’s book Radical, Self-Reliant Gardening, getting ready for Tuesday’s show. I stepped in to Starbucks for an Iced White Tea. 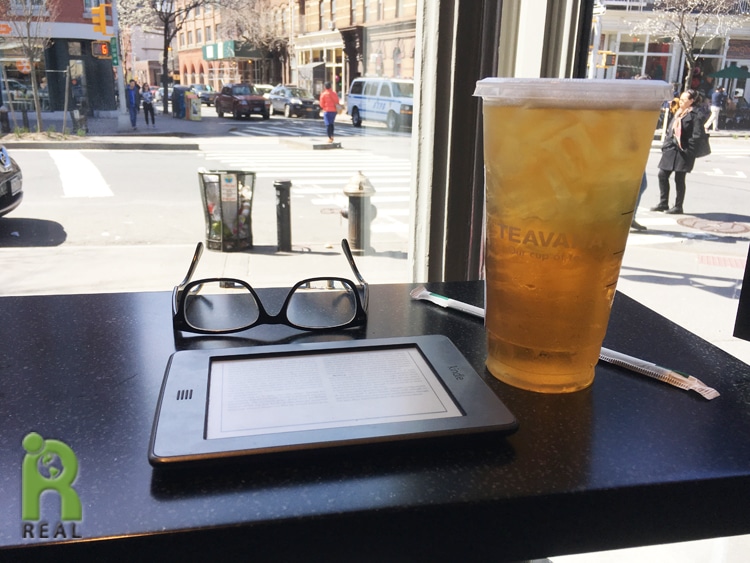 Later I had an actual phone conversation with an old friend. Do you remember what it was like to talk to people on the telephone instead of texting? It’s fantastic, so “in-the-moment.” I recommend it.

Daily Green Juice: I brought one of my frozen juices along in my back pack. In the afternoon it made a great, frosty, energizer with Kale, Collards, Celery, Carrots, Ginger, Lemon.

Dinner: I planned to meet my friend Lawrence for dinner and then we were going to Gary’s reading. I thought we might try The Butcher’s Daughter. I stood in front of it for a while. The front was open, with tables touching the sidewalk. The space was cramped and the music was blaring out to the street. I stepped inside briefly and the energy was not inviting. I love supporting veg restaurants but the ambiance was not for me. When Lawrence arrived I suggested we head over the the Village Natural, a macrobiotic, veg-friendly restaurant. Gary got off rehearsal and was able to join us. We started with Broccoli and Yam Tempura. 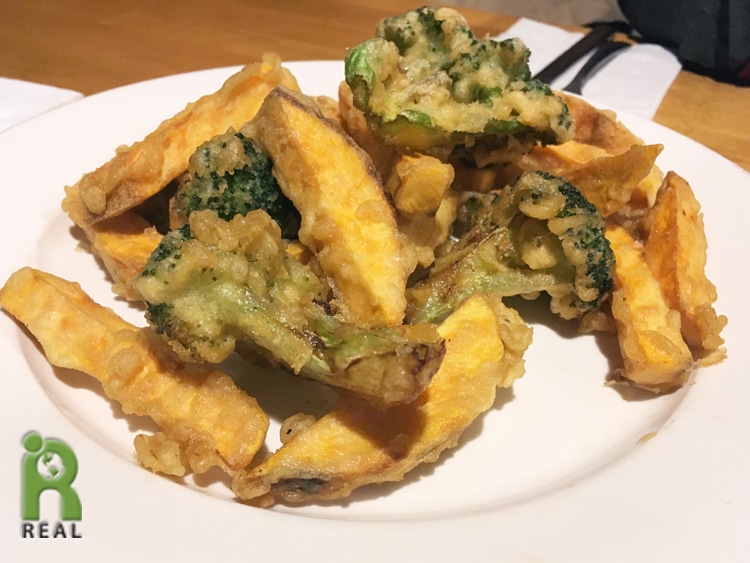 Gary was careful with his order knowing he would be performing in a little while. He got the Mezze Platter with Falafel, Hummus and Salad. Excellent choice! 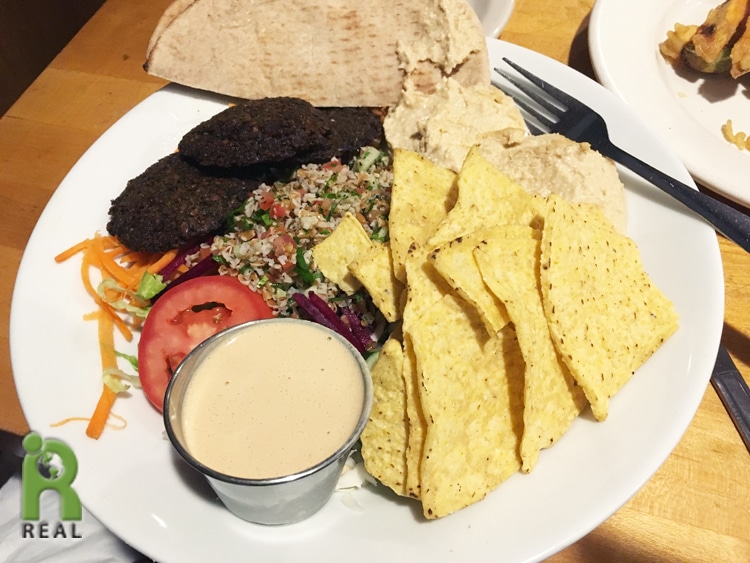 The Village Natural Vegan burger made with Quinoa was my choice. It was one of those soft and mushy burgers, but very tasty. 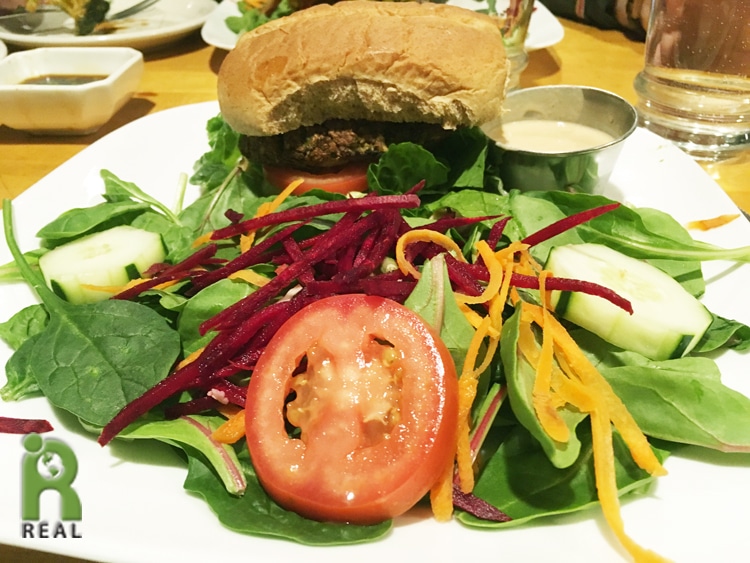 Lawrence and I shared the Blueberry and Apple Pie with Kukicha Twig Tea. It wasn’t the most beautiful pie I’d ever seen, it was more of a plop. There was an overwhelming taste of cinnamon which I didn’t like either. Everything else was good but the dessert was a miss. 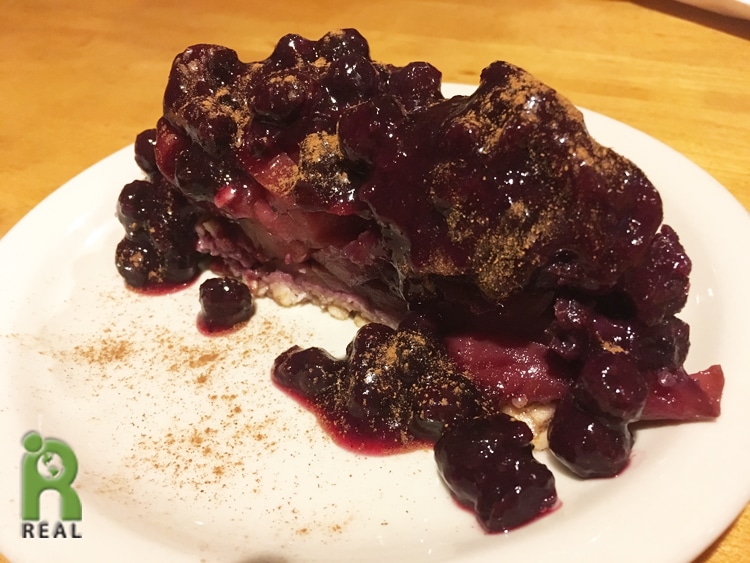 Evening: We met our friends Linda and Jean-Claude at the theater. Gary did a wonderful job as always. We all got to chat a bit after the show at the reception in the lobby. We came home and had our celebratory Corn Thins with Peanut Butter and Apricot Butter and I prepared my special evening herbal blend of Chamomile, Peppermint, Lemon and Ginger.