Today, Gary’s cousin Vittorio and his wife Cinzia were picking us up at our hotel and driving us to Genoa! Genoa is the capital of the Italian region of Liguria and the sixth-largest city in Italy. Gary’s brother-in-law decided not to make the trip today, so we waited for Gary’s sister Deb, Vittorio and Cinzia just outside the hotel, and as we waited for the car, we admired the Ligurian Sea and our beautiful surroundings in the morning sun. There were some Italian police officers, Carabinieri, flagging motorists and sending them to the parking lot by our hotel, it looked like a routine identification check but we didn’t want to have Vittorio and Cinzia delayed so we walked a block away from the hotel and when we saw them coming down the street we signaled for them to stop and we piled into their car and the five of us were off on another adventure through northern Italy!

We arrived in the ancient city of Genoa, and parked the car in a modern underground parking structure. Gary took a picture of where we were to remember when we returned because the lot was what you’d expect from a parking structure in a major metropolitan city — “Confusione!” 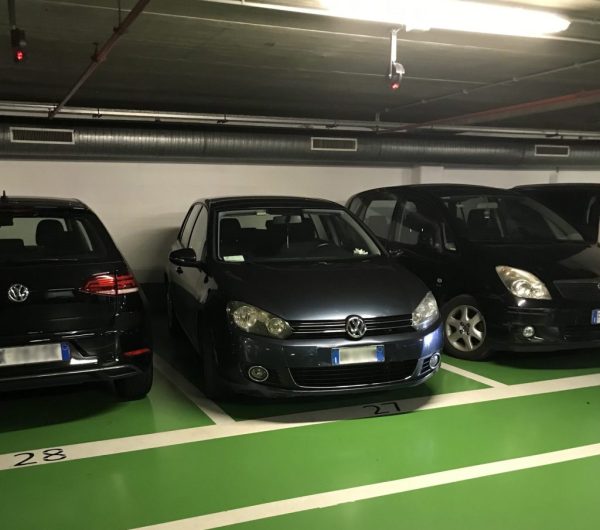 After several minutes lost underground, we made it out of the parking lot, climbed the stairs and found ourselves in the Piazza Della Vittoria (victory square,) featuring the Arco della Vittoria, the Victory Arc, or Arc of Triumph. We know the one in Paris quite well. This one was unexpected but somehow poetically appropriate considering the battle Vittorio just won with finding a parking place. It is dedicated to the Genoese who fell during the First World War, a work by the architect Marcello Piacentini and the sculptor Arturo Dazzi. As we learned from Vittorio, Gary had several Genovese ancestors whose lives were also lost in the first world war. 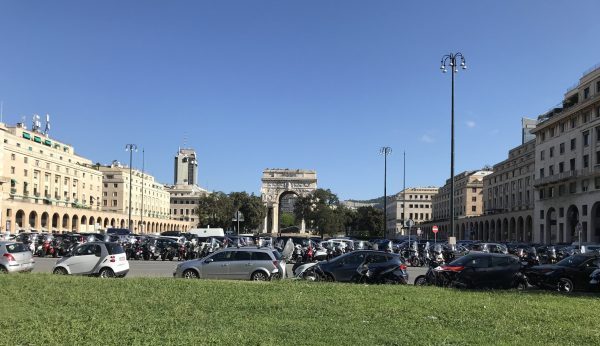 Gary and I also liked the sculpture across from the Piazza Della Vittoria. 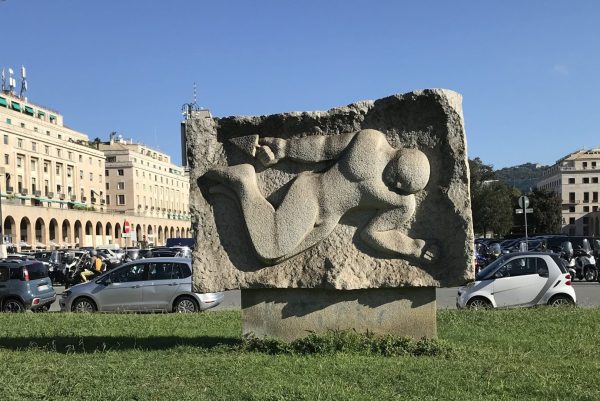 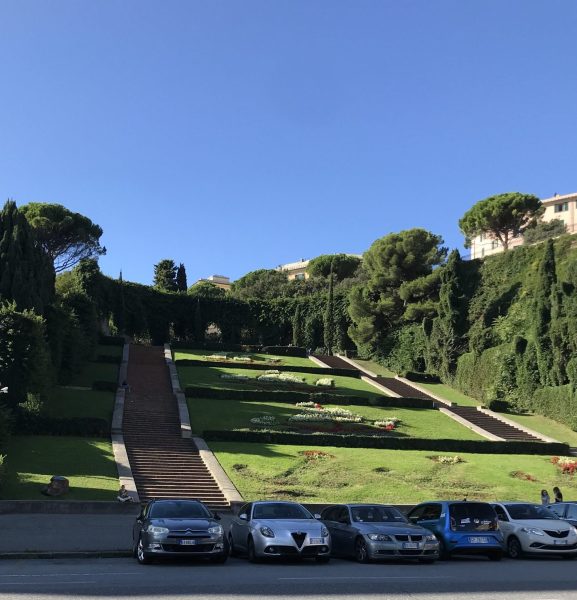 Gary took this photo of Piazza De Ferrari because Ferrari is not only the name of one of Italy’s most famous sports cars, but also the maiden name of Gary’s Aunt Esther who married Uncle Adolph, Gary’s father’s twin brother. 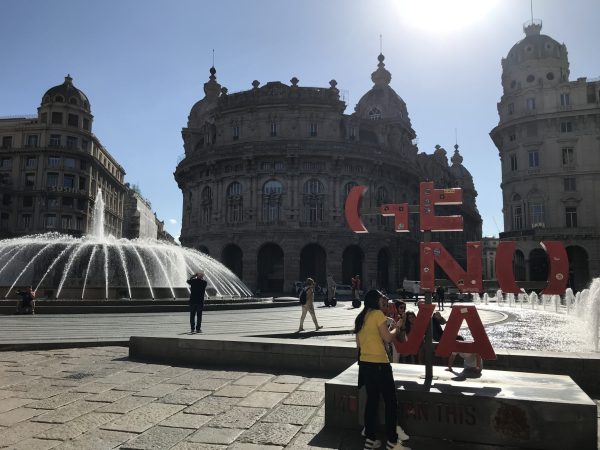 Here is the Sala Dogana, the space for young people in the Doge’s Palace, Palazzo Ducale. Designed for experimentation, it was created to take care of and work in a stable manner on emerging cultural production, innovation and the development of the skills and talents of young people, while promoting the exchange of experiences and the creation of networks. “A masterpiece of Gothic architecture, the Doge’s Palace is an impressive structure composed of layers of building elements and ornamentation, from its 14th and 15th century original foundations to the significant Renaissance and opulent Mannerist adjunctions.” If I had to sum up my experience in Genoa, I’d say this building is a metaphor for a modern people living in, caring for, and protecting their ancient city while also looking forward to their children’s future. 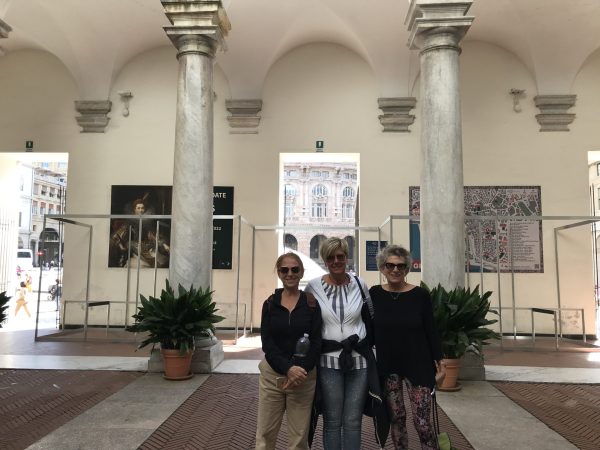 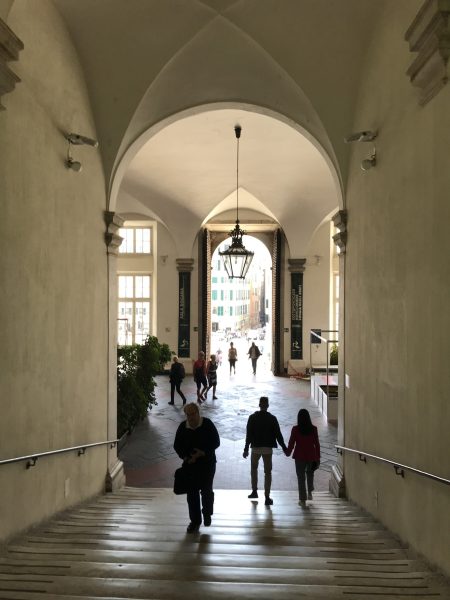 While looking around these stunning palaces, don’t forget to look up! 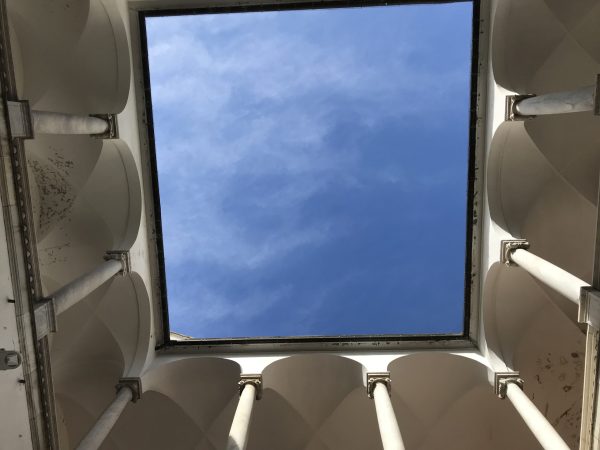 Passing by this poster makes one ask oneself, who was Guilio Regeni? Giulio Regeni was an Italian Cambridge University graduate who was abducted and tortured to death in Egypt in 2016. Regeni was a PhD student at Girton College, Cambridge, researching Egypt’s independent trade unions, and a former employee of the international consulting firm Oxford Analytica. In November 2020, Italian magistrates concluded the investigation into Regeni’s torture and murder, charging five Egyptian security officials as suspects in the case. The officials were set to face their trial in Italy. The investigation found that Regeni was tortured and murdered by the officials after his doctoral research led them to suspect him of being a spy. In October 2021, the trial of the four Egyptian police officers opened in Rome in their absence. They were accused of being behind the murder of Giulio Regeni. It was ruled that they would be tried by the prosecutors in Italy on charges of torturing, kidnapping and murdering Regeni.

However, on 14 October 2021 the Third Court of Assizes of Rome invalidated the trial, stating that the three NSA agents had not been notified about their charges and that, therefore, the trial could not begin. The case, therefore, returned to the Judge of the Preliminary Hearing. The poster reminds us that the truth behind this young man’s murder must be determined. 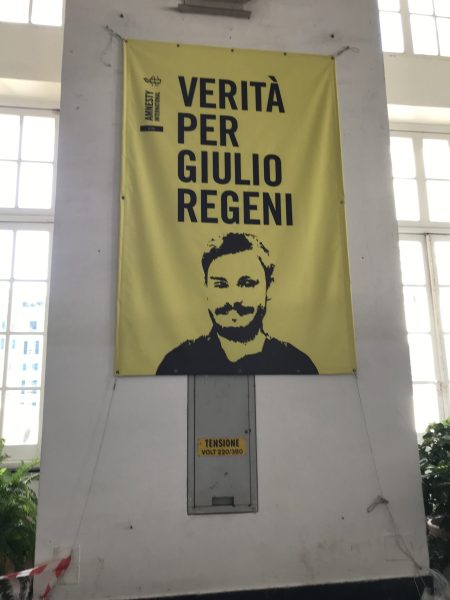 Pondering the evil ways of man, we walked over to the Cattedrale di San Lorenzo, the black-&-white-striped Romanesque cathedral with a frescoed interior, housing unique holy relics. It’s impressive. 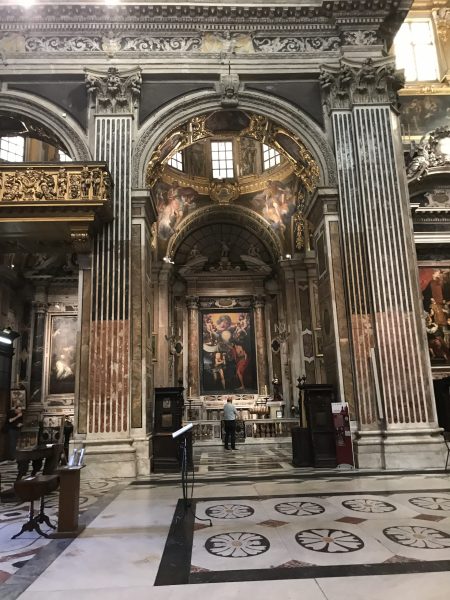 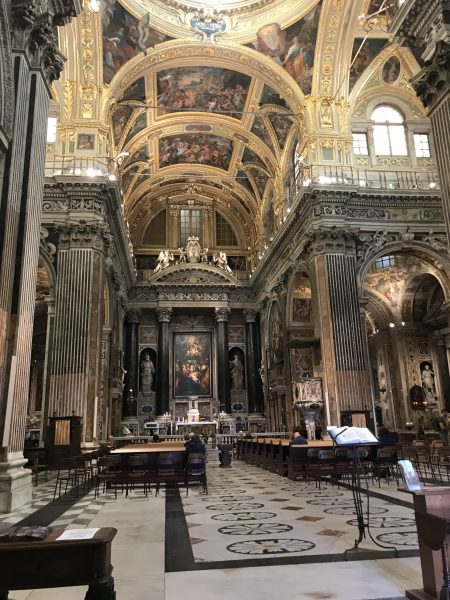 Don’t forget to check out the ceiling! 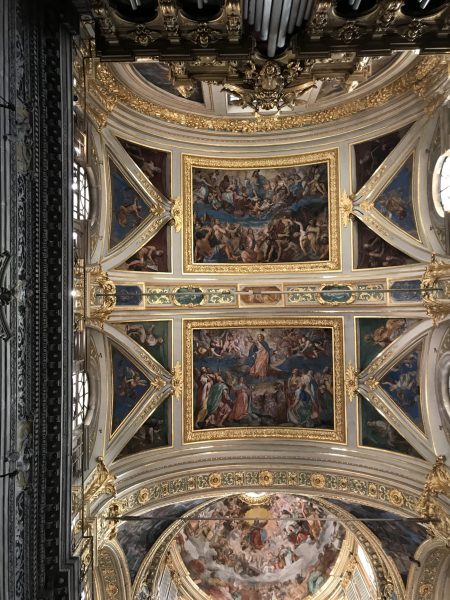 We were also getting hungry. Vittorio brought us over to the trattorio Rosmarino for lunch. They boast making everything right there in the trattorio, the bread, pasta, focaccia, desserts.

How can you not be happy on this sunny day in this beautiful spot? Here is Gary’s sister Deb and cousin Vittorio. 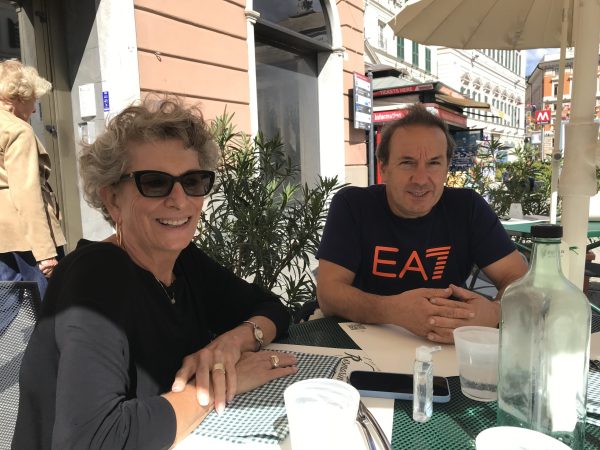 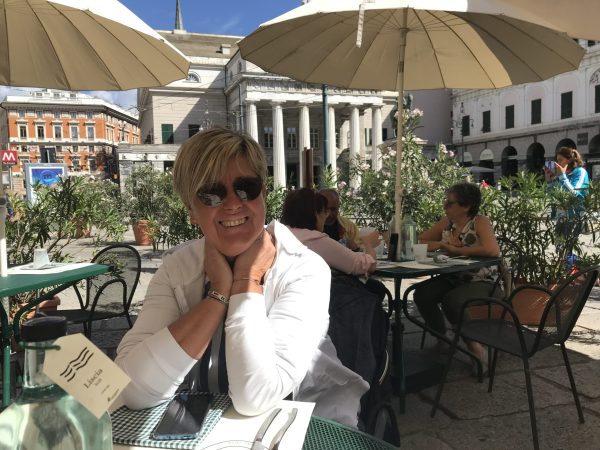 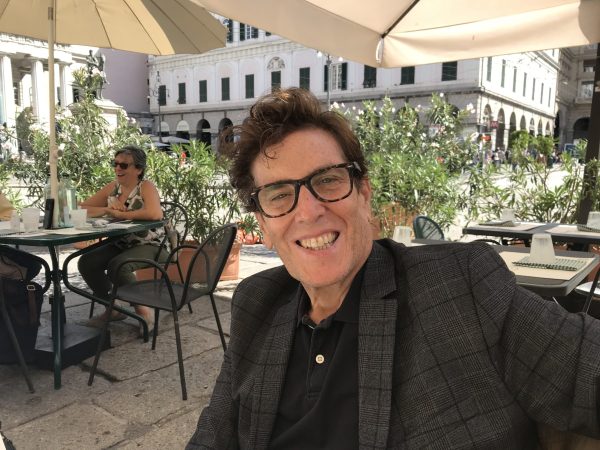 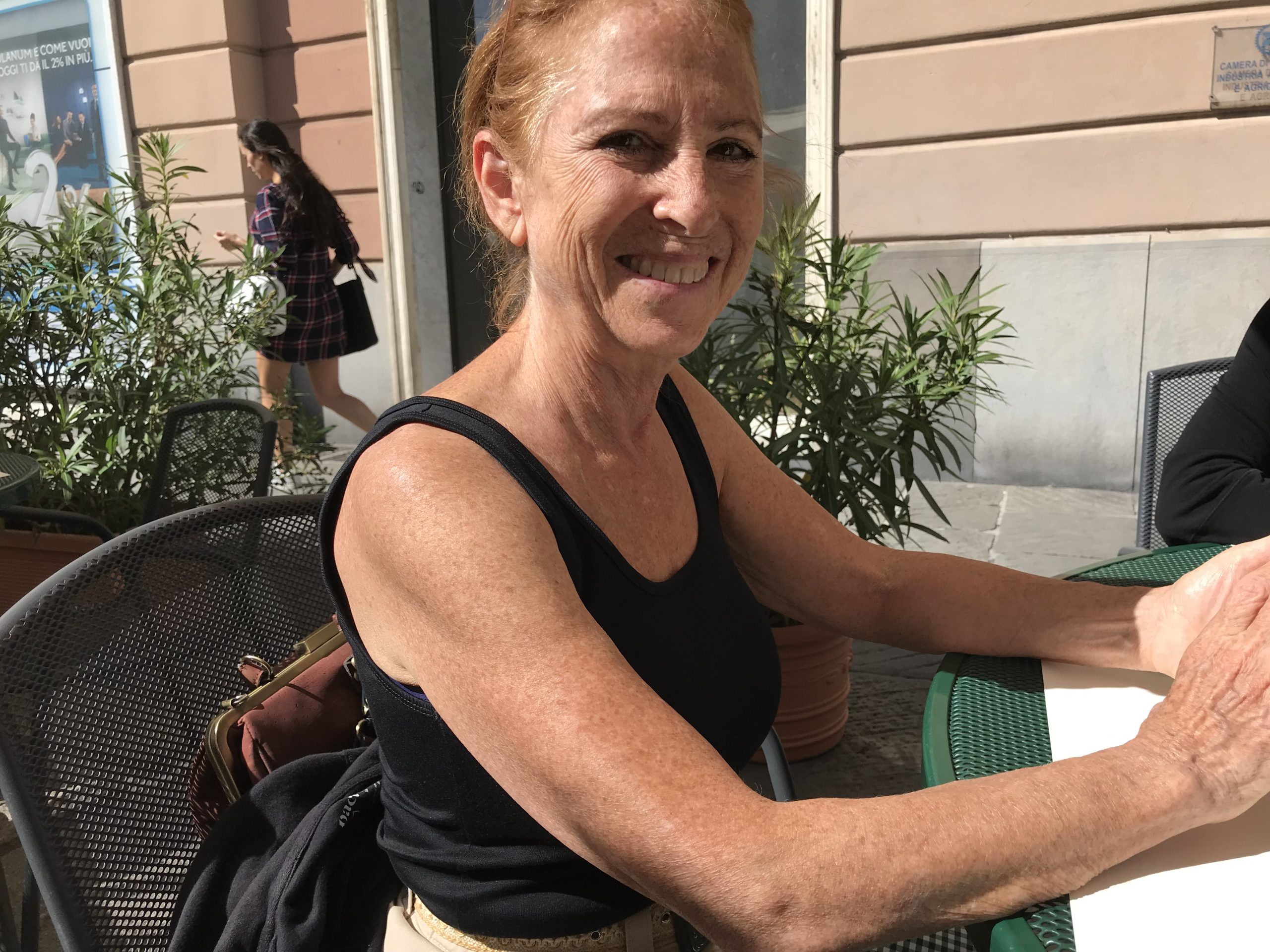 The fresh baked bread was served in a paper bag. We started with salad. In many restaurants here the salad comes undressed. It is up to you to pour on the olive oil and balsamic vinegar, and add the salt and pepper. I just went with balsamic vinegar on my salad. 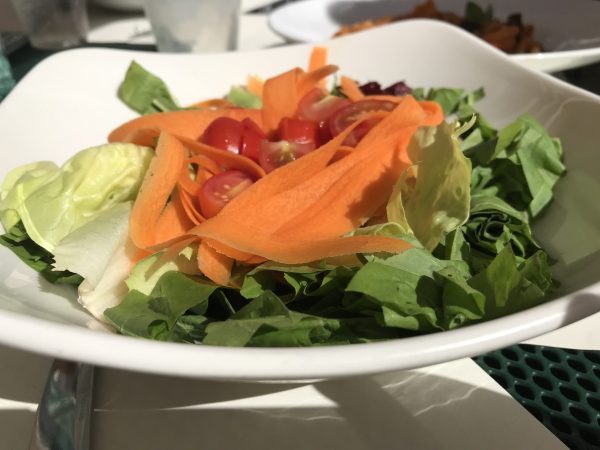 I am still stunned that people don’t flinch when you tell them you are vegan here. They are always poised, respectful and ready to tell you what they can offer you. I chose the pasta with mushrooms in a delicate, savory sauce. 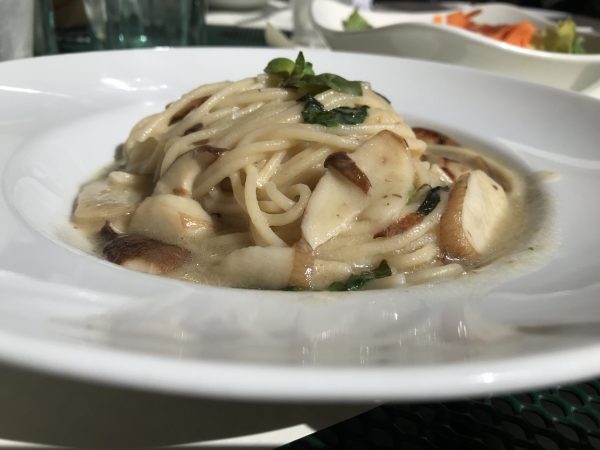 Gary had the pasta in a light tomato sauce. 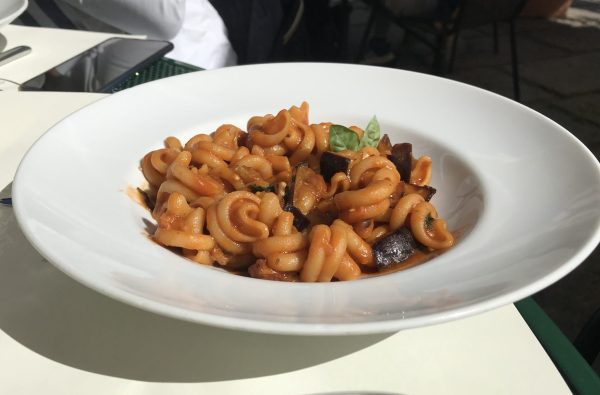 We continued to walk around quite a bit and then Vittorio thought we might enjoy a ride on a double decker tour bus. I appreciated getting a bit of break from walking while seeing all of Genoa from the upper deck of the bus.

The Bus Stop at the Piazza De Ferrari. 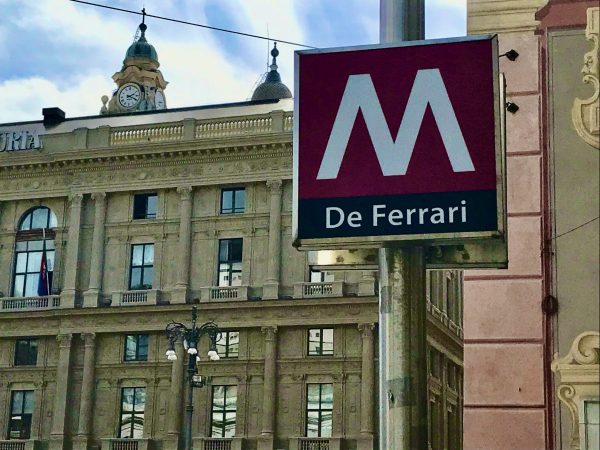 After a perfect day in Genoa we were ready to return to Rapallo.

Once back at the Hotel Italia we napped. Naturally when we awoke we were hungry again so Gary and I ventured out in search of food. HappyCow.net listed Ristorante Nettuno as a place with two vegan pizzas. Their menu has about 30 pizzas and two are vegan. We got them both.

We ordered the Marinara Pizza: tomato, garlic, oregano, basil, with a Classic crust. 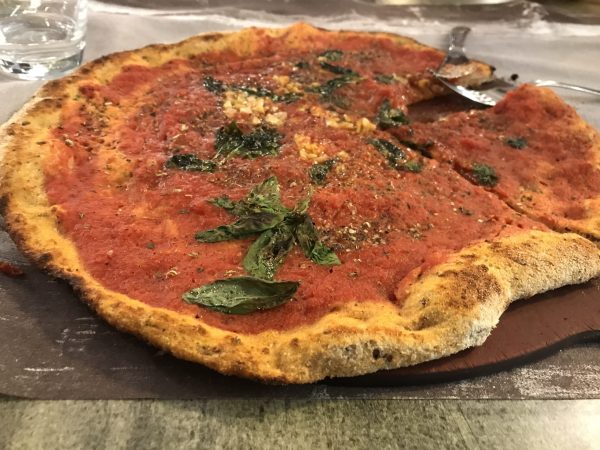 And the Vegan Cream consisting of pumpkin cream, dried tomatoes, courgettes, black pepper, and we ordered it with the Integral Crust. 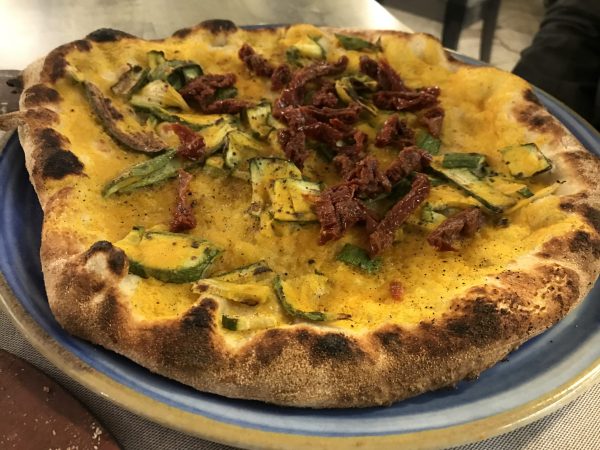 Just looking at the photos now, I am getting very hungry and craving these excellent pies! When can we go back?