Hi Everybody. Welcome to our new show. When it comes to food and lifestyle we plan on bringing you the good news, the triumphs, and successes that are happening all around us. We want to inspire you to be a part of this movement, this revolution, to create a healthy planet, that can provide us with nutritious, abundant food for all. We’ll be bringing you news, food shows and highlighting local business that make responsible eating and living easy, fun and so good for you and your family.

To begin our news segment I want to discuss a bit of what’s been brewing in the food world. What’s in a name? A lot apparently to some, when it comes to food. What makes, milk milk, meat meat, cheese cheese and mayonnaise mayonnaise?

Let’s start with mayonnaise. For years now, vegans have been able to enjoy a number of plant-based products that are meant to replace the traditional mayonnaise made with eggs.

The Follow Your Heart company has Vegenaise. Their tag line is – Enjoy great tasting Vegenaise®, an egg-free mayonnaise with better-than-mayonnaise taste.

But it’s Hampton Creek that’s making headline. Hampton Creek, selected by Bill Gates as a company shaping the future of food, is the newest kid on the vegan mayo block. Their product, called Just Mayo got the multinational consumer goods giant, Unilever very nervous and Unilever sued this tiny start-up, over the eggless, mayonnaise-like spread Hampton Creek had been selling for a little less than a year (whining) because it’s not real mayonnaise. Unilever, as you may know is the maker of “REAL Mayonnaise”, under the names of Hellman’s or Best Foods, depending on where you live.

The suit was dropped in about a month when Unilever realize what a mistake it was. And Hampton Creek got a lot of positive press and additional $90 million in investment capital. As the Los Angeles Times put it: “The mayo war was over before it even began.”

As crazy as this all sounds, it’s all based on the FDA’s definition for mayonnaise which says it must include egg yolk-containing ingredients. But they don’t define the word mayo, and that’s what Hampton Creek used to define their product. The lines around mayonnaise are graying as they should. If a company can make a product that tastes the same or better than the original and do it more sustainability, produce it more economically and take the horrific cruelty out of it, shouldn’t we be rejoicing? I think so.

Well, what about other names for food, like cheese, meat and milk?

Plant milk cheese companies are popping up all over. When I spoke with Miyoko Schinner a few months ago about her new company Miyoko’s Kitchen in California, she told me that because her product isn’t made from dairy, in the state of California, it can’t be called cheese. Instead, it is labeled Artisinal Vegan Cultured Nut Product. Cultured nut product! She’s making cheese! Real cheese, made from nuts, cultured and aged, just like the dairy varieties.

Now you are probably thinking about milk, right? We have so many varieties of non dairy milk today, soy, almond, hemp, oat, coconut. Believe it or not, the soy milk manufacturers had to fight their own legal battle to use the word milk and they won. We are all winners as a result.

Veggie meats are everywhere today, with deli slices, burgers, chunks, strips, dogs, sausages and ground varieties replacing beef, chicken and pork. Beyond Beef and Gardein products are available now in supermarkets and cooked up in restaurant dishes. Keep an eye out for Beyond Beef’s Beast Burger and Impossible Foods this year. They are studying meat and cheese at a molecular level and have come up with plant ingredients that will produce the same end products – meat and cheese made from plants, no animals required. Impossible Foods boasts a plant-based burger that is as juicy and bloody as a burger made from cow. I haven’t eaten meat in forty years so it doesn’t sound appetizing for me. But to make a product that will satisfy all the hungry meat eaters out there, a product that’s healthier, gentle on the environment, doesn’t involve exploiting animals, and is cheaper to make and convenient for consumers – I say, bring it on!

This is what’s called disruptive technology – innovation that displaces an established technology and shakes up the industry. It’s not entirely ground-breaking, as meat substitutes have been around for hundreds of years: Wheat gluten, is believed to have originated in ancient China, Tofu was invented in China by the Han dynasty (206 BC–220 AD). Some vegetarian meat analogues are based on centuries-old recipes for wheat gluten, rice, mushrooms, legumes, tempeh, yam flour or pressed-tofu, with flavoring added to make the finished product taste like chicken, beef, lamb, ham, sausage, seafood, etc. There’s Yuba, the thin skin which forms on top of boiled soy milk and textured vegetable protein (TVP) derived from soy and soy protein concentrate. What’s different now is the marriage of technology, venture capital and a growing market interested in eliminating the factory farming of animals because of the cruelty involved, and how devastating it is on environment.

Mark my word – it may take some time, but foods that originally came from animals, including meat, eggs and milk will all be replaced by cruelty-free, environmentally sustainable, healthier and tastier plant alternatives. And many will never know the difference. That’s what we’ll be watching out for in 2015.

Now over to our Transition Kitchen.

This is Part I of the first episode of REAL GOOD NEWS IN REVIEW.

Host, Caryn Hartglass reports on the Good News from 2014, including making milks, cheeses, meats and mayonnaise from plant ingredients, rather than from animals. REAL GOOD NEWS IN REVIEW is a new vegan, plant-based lifestyle and information series for the web. Each segment will include a good news newscast program for those interested in keeping up to date and/or transitioning to a plant-based lifestyle. The series will also include a plant-based food show titled, THE TRANSITION KITCHEN which will feature step-by-step vegan versions of omnivore favorites. Also, each episode features a visit to a local business whose mission is in line with ours at Responsible Eating And Living. 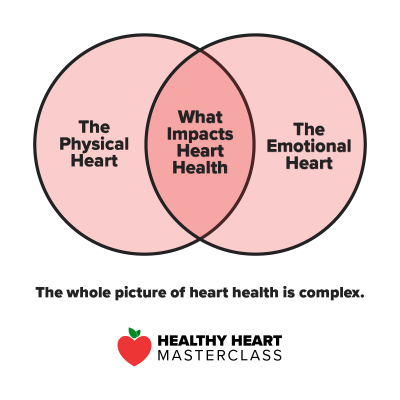 There's more to heart health than can be measured in a test tube! Discover the latest research on preventing heart disease through whole-heart healing in the #HealthyHeartMasterclass.
Save your free spot.