Breakfast: This was not just another day of vegan eating. Tonight we were going to the James Beard Foundation’s dinner event entitled Women Chefs Rule: The Vegan Edition, Presented by Women Chefs and Restaurateurs. I was so excited!! Neither of us was in the mood to prepare anything for breakfast. That’s when Corn Thins come in handy, with Peanut Butter and Apricot Butter. 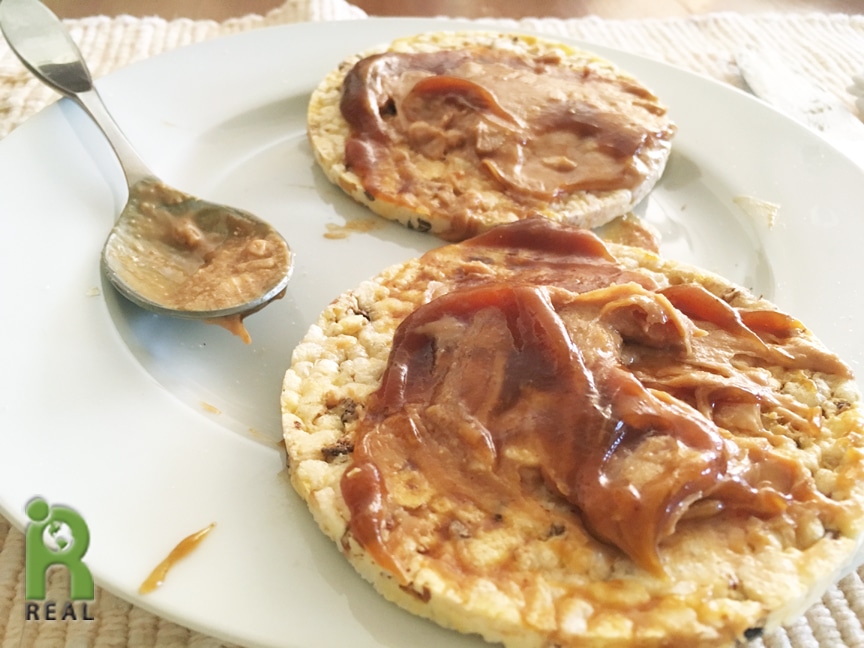 Lunch: With the big event this evening the question was, should we eat something for lunch or not? We had a little of the Sweet Potato Black Bean Soup leftover so we finished it. I added mushrooms to mine. 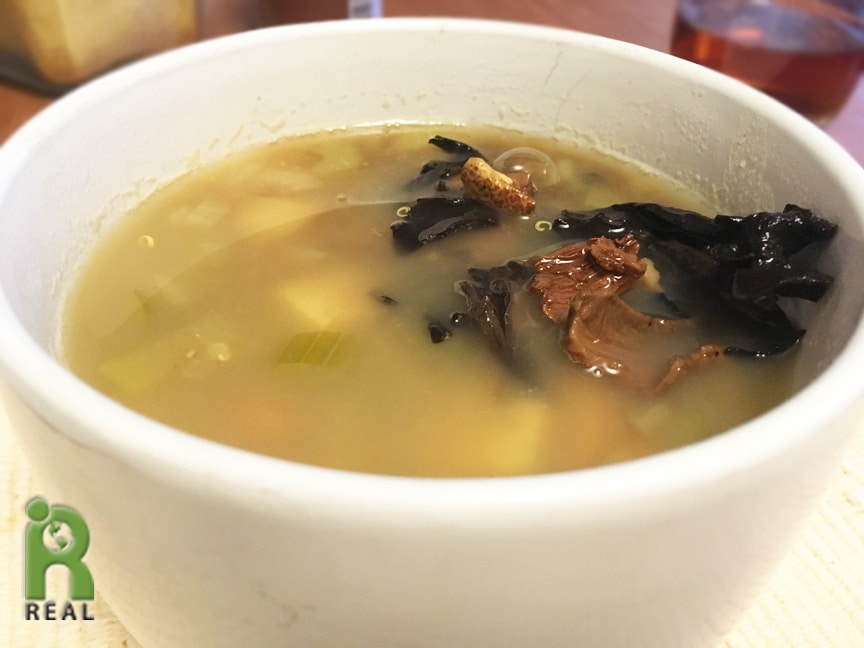 Dinner: In addition to looking forward to our dinner event, I couldn’t wait to see Gary in his new Vaute Couture winter coat. Founded by Leanne Mai-ly Hilgart, Vaute Couture is a vegan fashion company that not only makes beautiful, cruelty-free clothing but uses organic materials and sews locally here in NYC. Who is that handsome fellow in that Vaute coat? 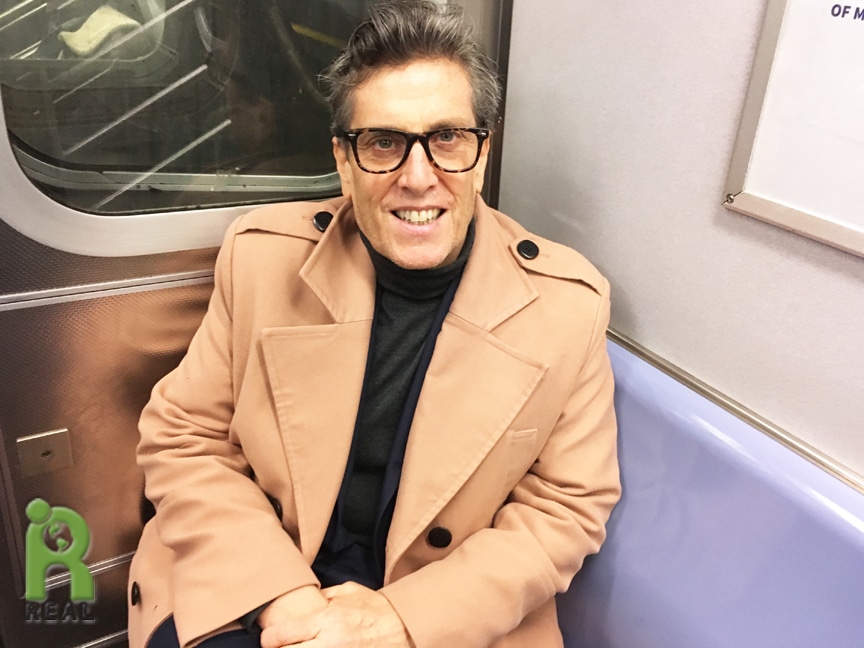 We arrived at the James Beard house and the joint was jumping! After checking in we moved to the room where the appetizers and drinks were being served. Everyone was being corralled there and it got crowded fast. What a great way to mingle and meet, with strangers so close to you, you can’t help but start up a conversation. First, I looked for my friend Linda Long who I knew would be there. I had not seen her in a while, I was looking forward to chatting with her over dinner. 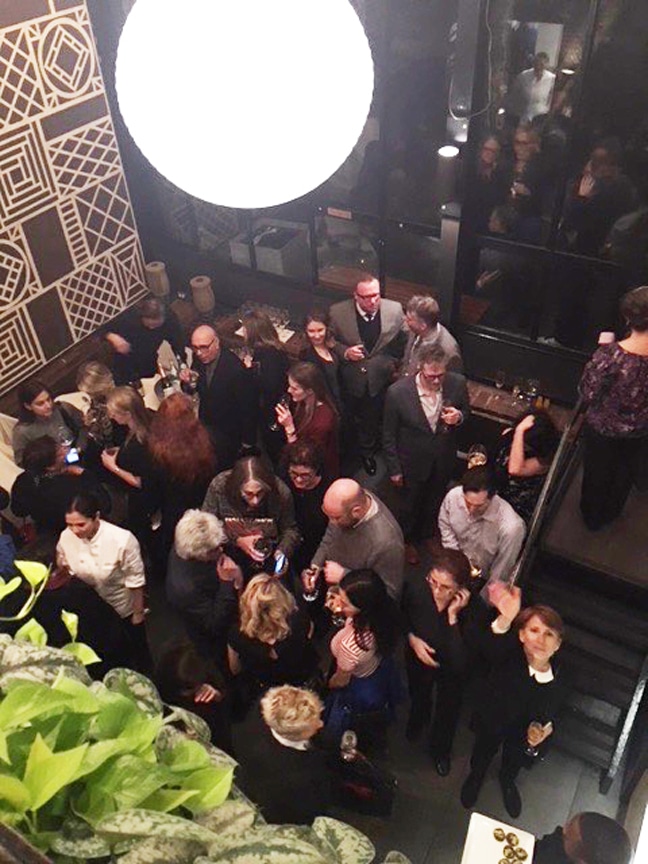 
We met Misti Ushio, PhD. the founding CEO of TARA Biosystems and her husband Barclay Morrison, Professor of Biomedical Engineering at Columbia. We had fun talking about biotechnology and the pharmaceutical industry, the semiconductor industry and of course, vegan food. Both are not vegan, and they came to the event with curiosity. We were served Chilled Carrot–Beet Borscht Shooters with Macadamia Nut Sour Crème and Amaranth Microgreens. It was bursting with fresh flavors. 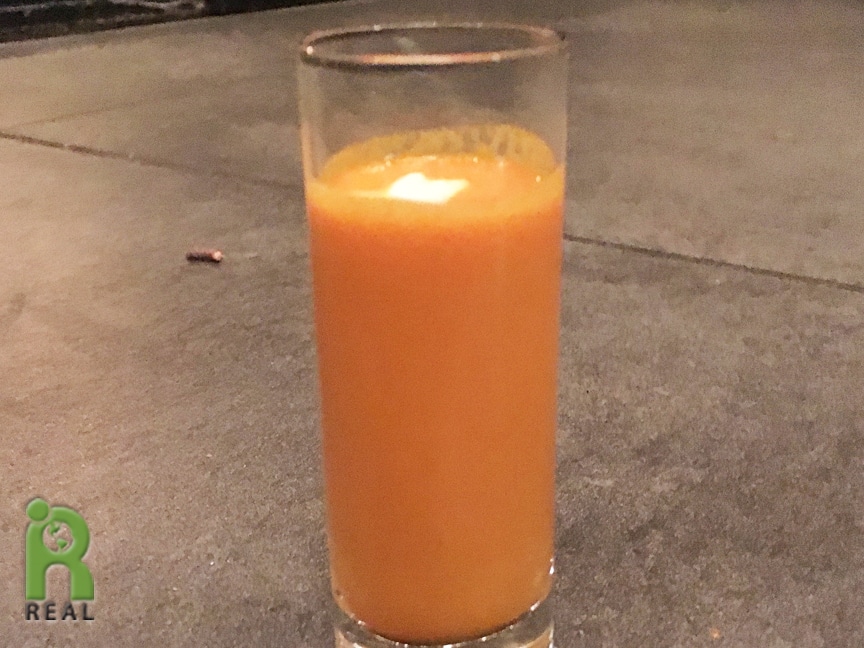 The Toasted Quinoa Cakes with Whipped Fava Bean Hummus, Dill Oil, and Onion Flowers were my favorite of the appetizer and I was happy when the tray would come around again with more of them. 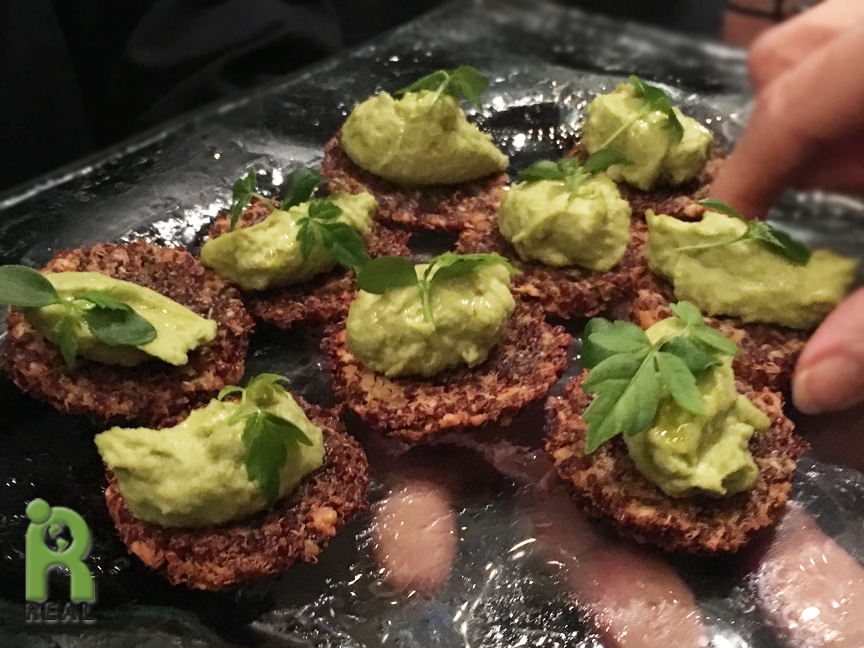 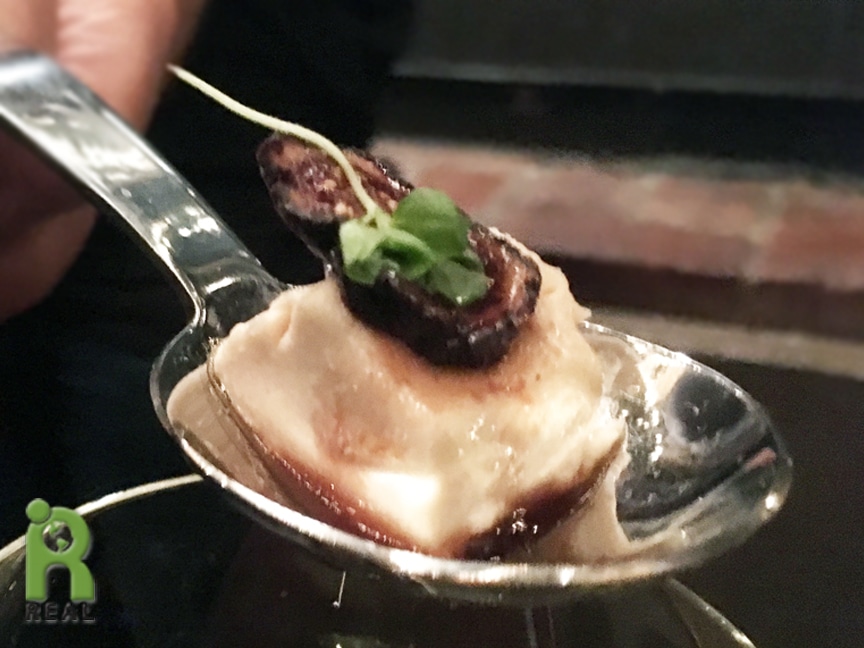 The Spicy Walnut–Lentil Lettuce Cups with Mango Salsa and Cilantro–Avocado Crème were colorful and crunchy. 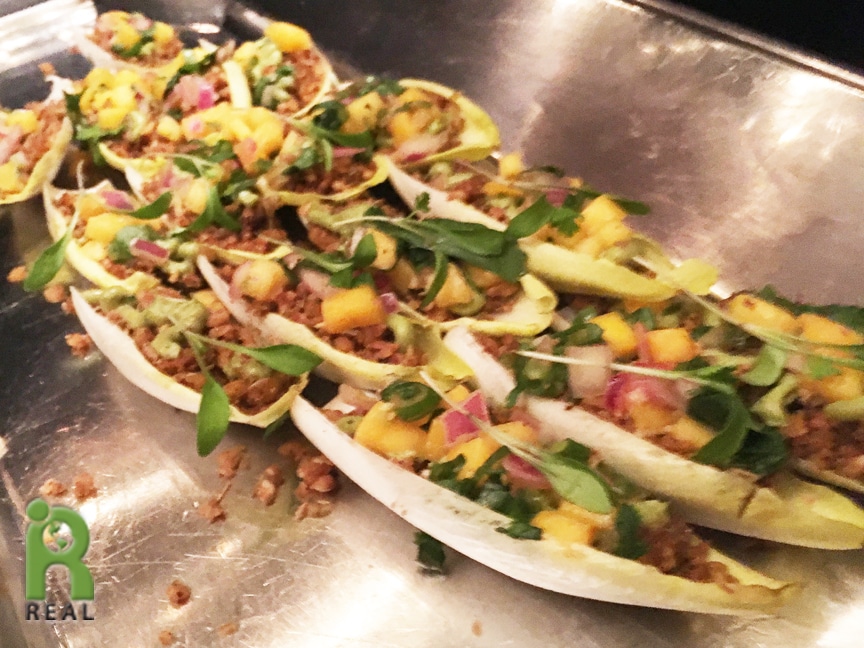 The kitchen was an open space where we could see the chefs at work. 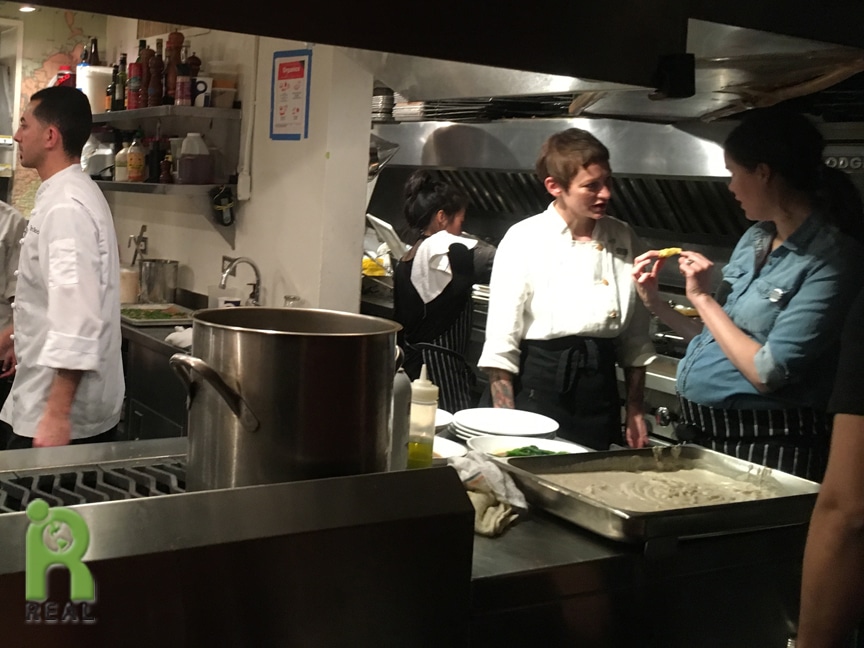 We were seated at Table 1. All the other tables were placed and set in different rooms of the house except for Table 1 which was in the room where the appetizers were served. We waited for the room to clear out as people went to their designated tables. Then Table 1 was brought out and set. Once seated we looked over our menus. Coincidentally, Misti and Barclay were seated at the same table with us. I introduced myself and Gary to all at the table and congratulated us all for being #1. 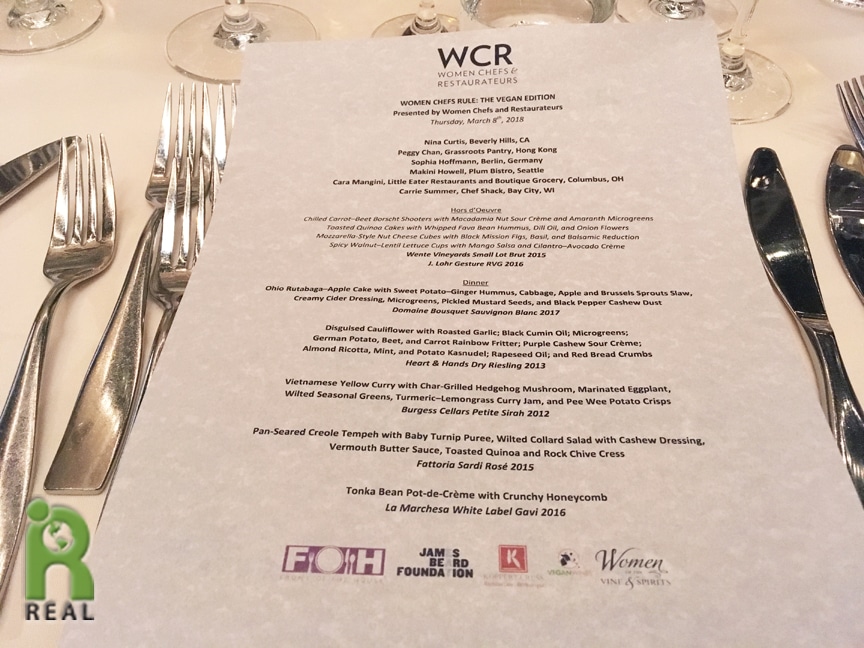 Our first main dish was the Ohio Rutabaga–Apple Cake with Sweet Potato–Ginger Hummus, Cabbage–Apple Slaw, Cider Vinaigrette, Microgreens, Arugula Oil, and Pickled Mustard Seeds. I loved everything about it and ate it too quickly! 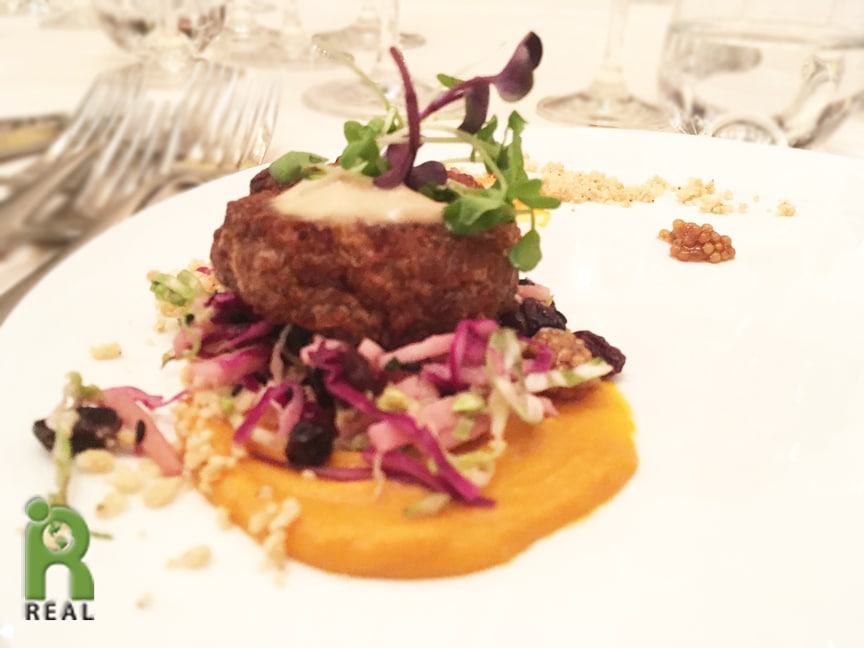 Next we were served the Disguised Cauliflower with Roasted Garlic; Black Cumin Oil; Microgreens; German Potato, Beet, and Carrot Rainbow Fritter; Purple Cashew Sour Crème; Almond Ricotta, Mint, and Potato Kasnudel; Rapeseed Oil; and Red Bread Crumbs. I was mindful to savor and discover the flavors of each creamy dollop on the plate. 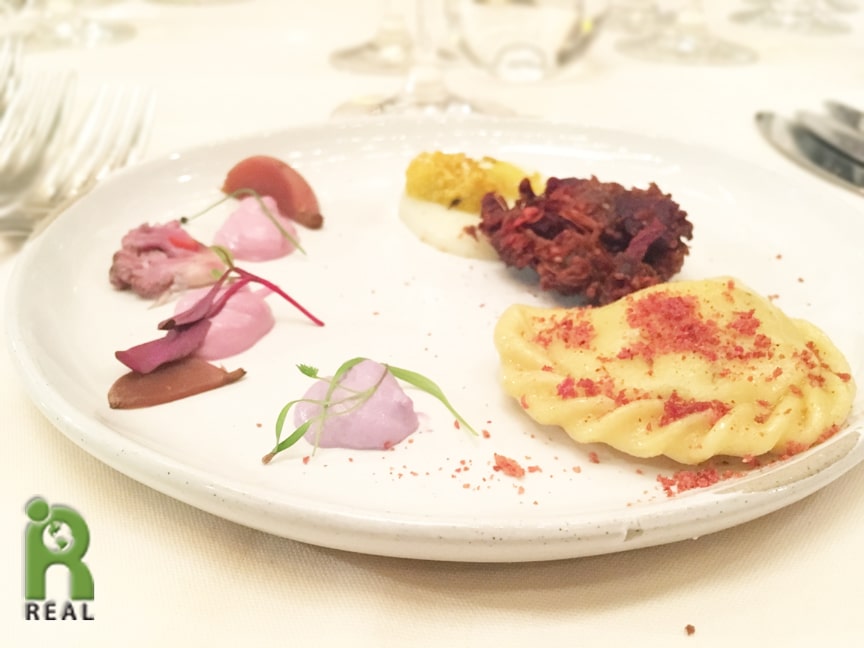 There was a lot of food and the servings were substantial. Our third dish was the Vietnamese Yellow Curry with Char-Grilled Hedgehog Mushroom, Marinated Eggplant, Wilted Seasonal Greens, Turmeric–Lemongrass Curry Jam, and Brown Rice Cracker. I don’t think I have had a Hedgehog Mushroom before and the texture was different from other mushrooms. Of course Gary wouldn’t eat his mushrooms and he swiftly put them on my plate. 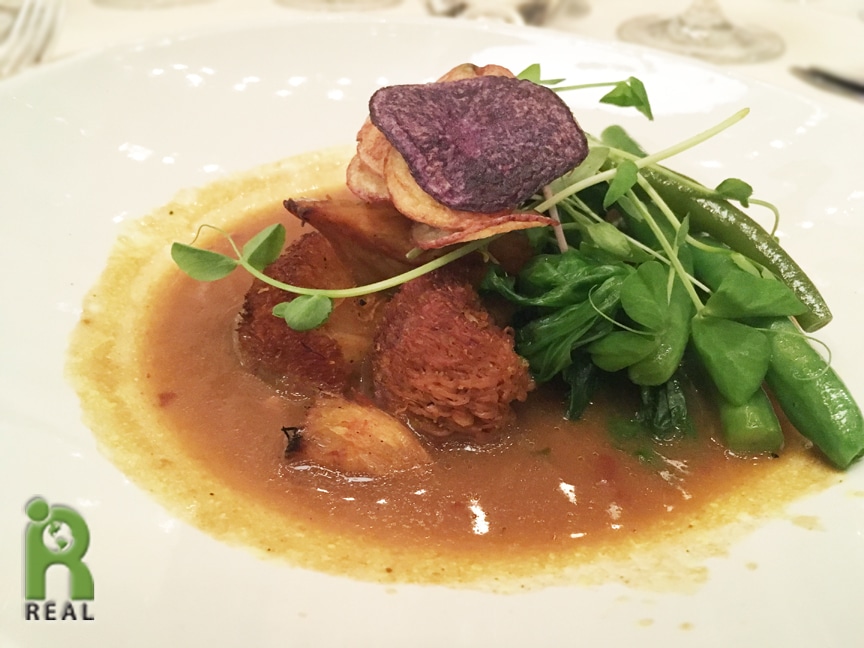 Last but not least, we had the Pan-Seared Creole Tempeh with Toasted Quinoa, Collard Salad, and Turnip Purée. I loved the flavor of the turnip and the greens under the tempeh were exceptional. 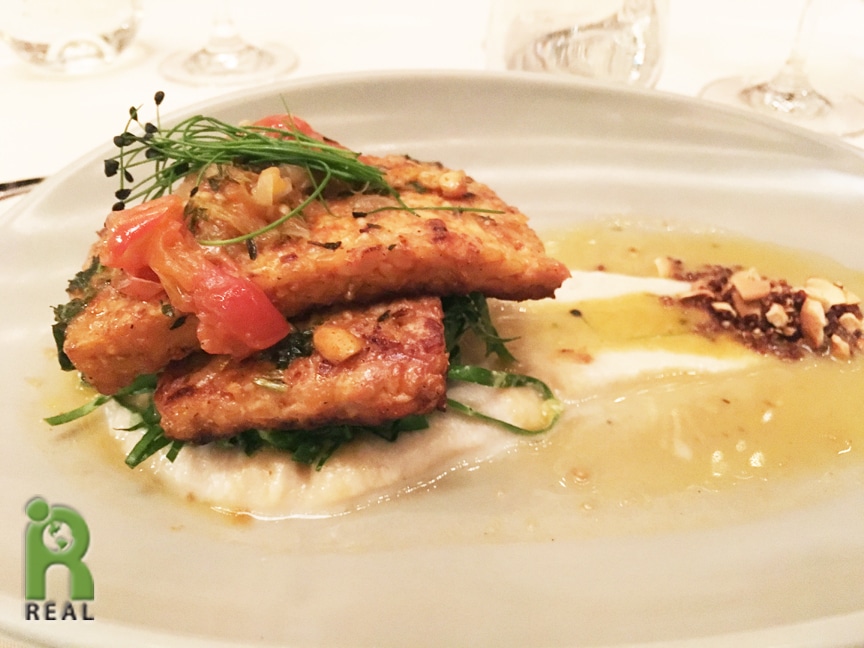 For dessert, we had Tonka Bean Pot-de-Crème with Crunchy Honeycomb. Chef Carrie Summer prepared it, describing it as a coconut vegan custard with a sugar comb garnish. I think she meant it was made with sugar, giving it a honeycomb pattern without the honey, since many vegans do not consume honey. It was a delicately sweet ending to a lovely meal. I ordered some Chai Tea with my dessert. I am not a fan of tea bags (I prefer brewing loose tea), but this one was stunning. 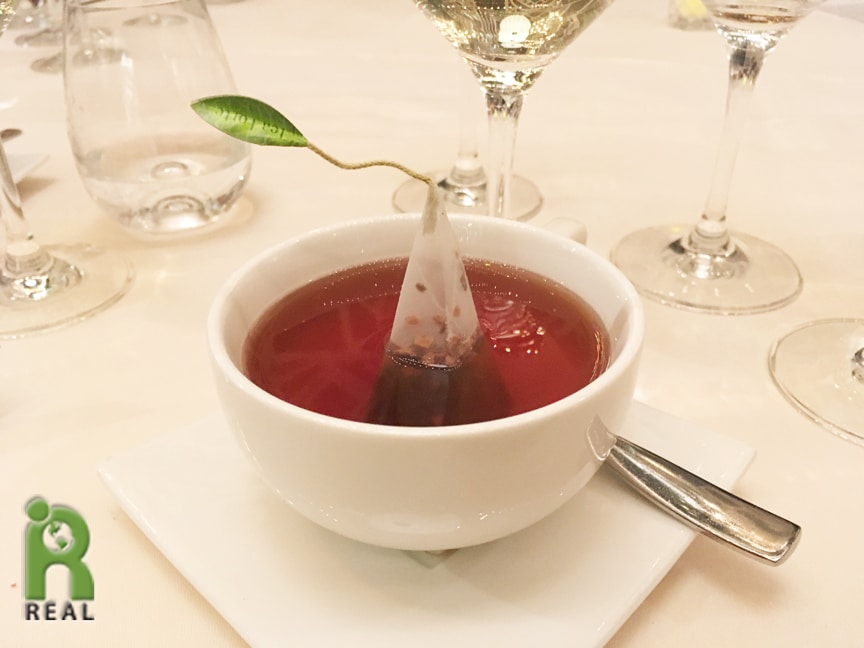 We did have the best table. We were introduced to the new Executive Director, Clare Reichenbach. Seated are Tom, Lexi and Sasha. 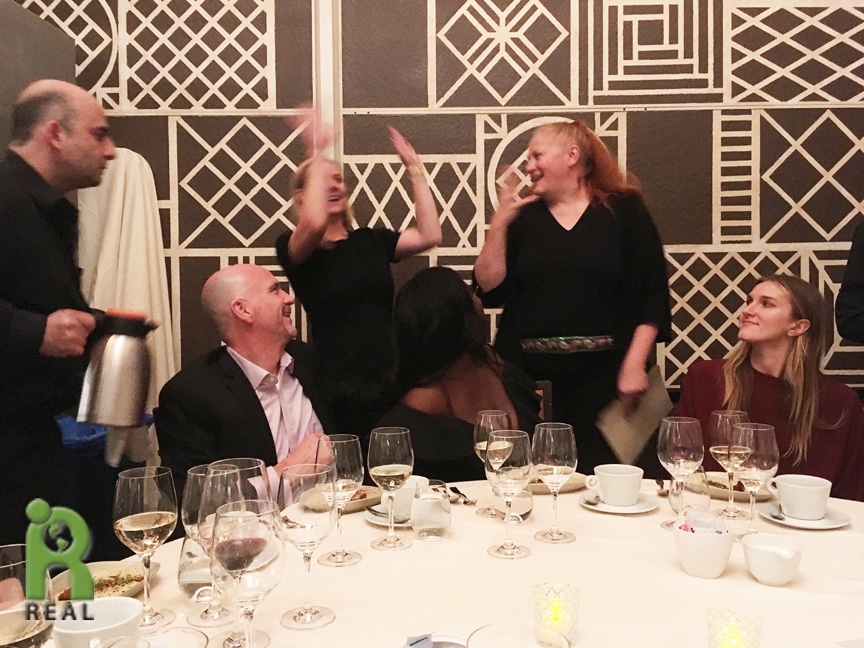 I kept looking over to two women at our table that I knew I recognized. Finally I said to them, “You look like SOMEBODY!” Quickly I realized who they were. Believe it or not we were sitting at the same table as Leanne Mai-ly Hilgart founder of Vaute Couture. Just days before we had ordered Gary’s Vaute Couture coat and he wore it for the first time tonight. I excitedly expressed my gratitude to Leanne for her company and the coat. The other woman was none other than Liz Dee, co-president of Smarties Candy Company (makers of the iconic Smarties candy roll), co-founder and CEO of Baleine & Bjorn Capital, and the founder of Vegan Ladyboss. Of course I recognized both of them! I have met Leanne and Liz at other vegan functions and I see their faces on my Facebook page all the time. 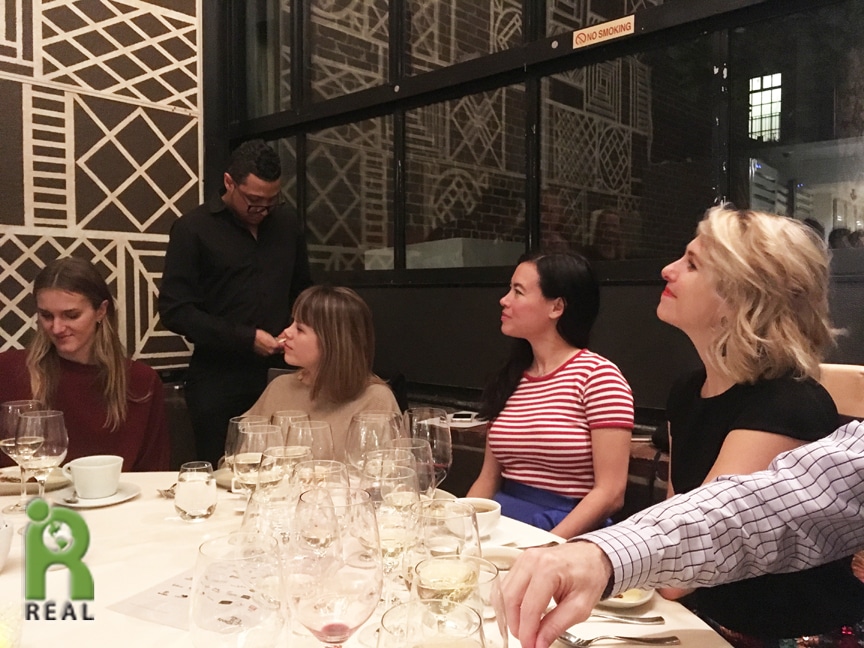 Gary shared some of his special talents with Tom and Stephanie and other guests at our table. 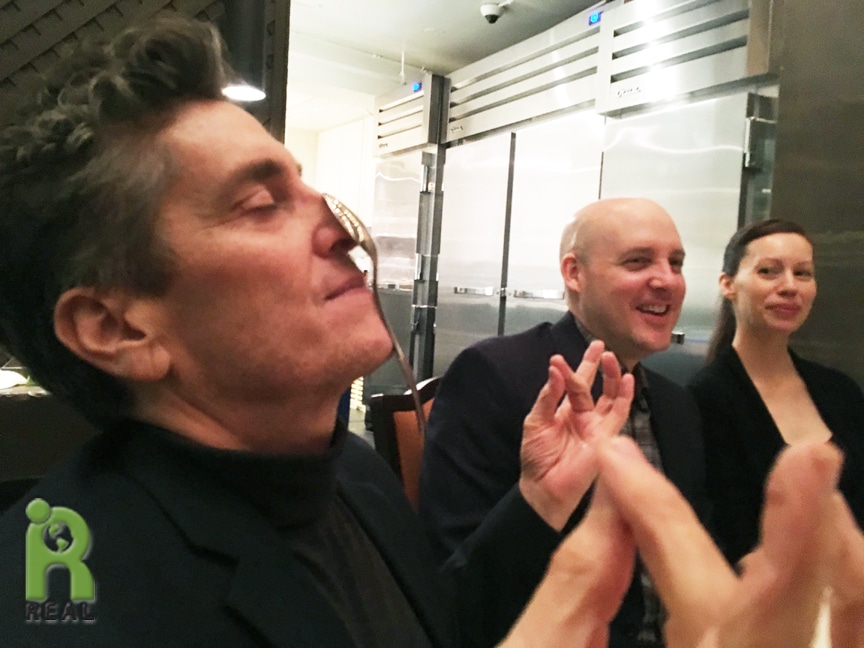 When the dinner was finished the chefs came around to each table and introduced themselves. From left to right: Sophia Hoffmann, Vegan Chef, Author, and Food Activist, from Berlin, Germany; Cara Mangini from Little Eater Restaurant and Grocery Store in Columbus, OH; Carrie Summer from Chef Shack in Bay City, WI. 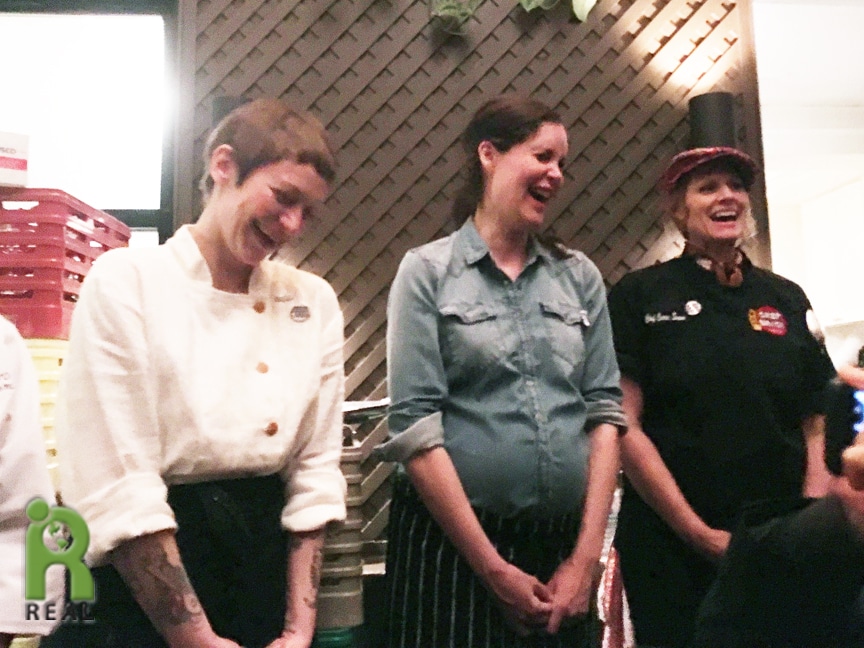 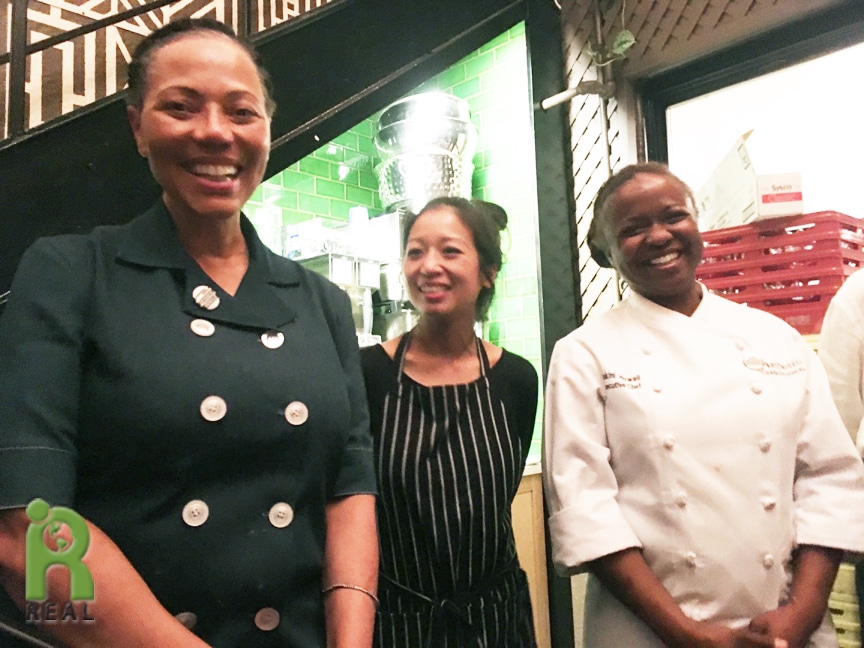 Afterwards we went upstairs and got to hear a little more from all the chefs as well as look around at the rest of the James Beard House. 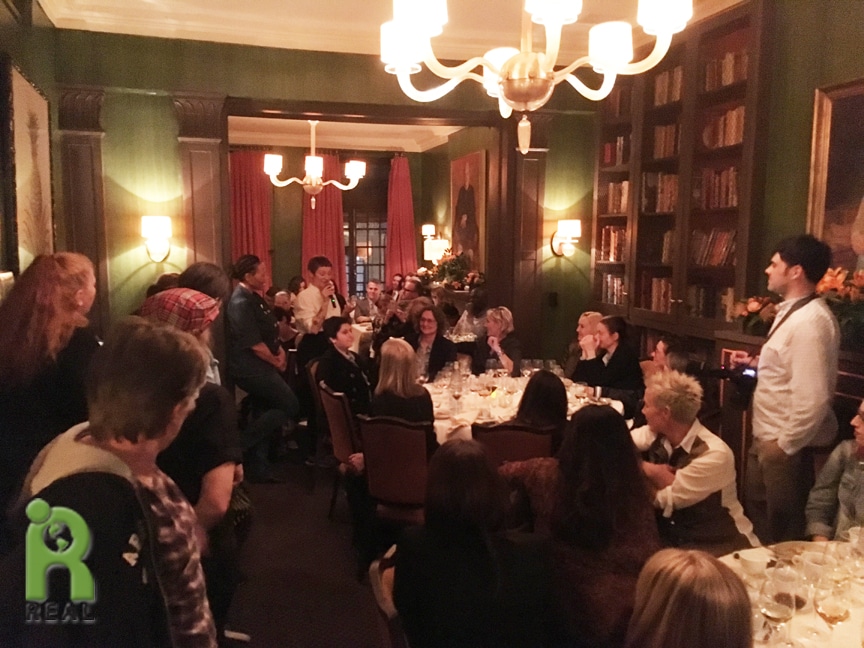 I was surprised not to recognize anyone else at the event. I believe the majority of people at the event were regular patrons of the James Beard Foundation’s dinner event and were not vegan. This was a wonderful opportunity to get introduced to a satisfying array of vegan dishes. 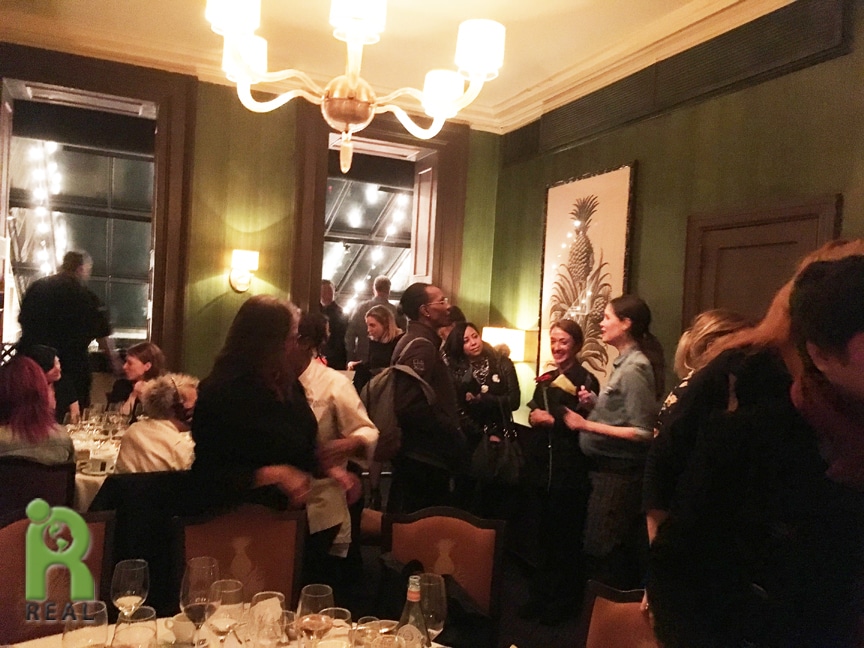 Linda Long and I were not seated at the same table so we found a moment after dinner to connect. She introduced me to the neuroscientist she had met at her table. 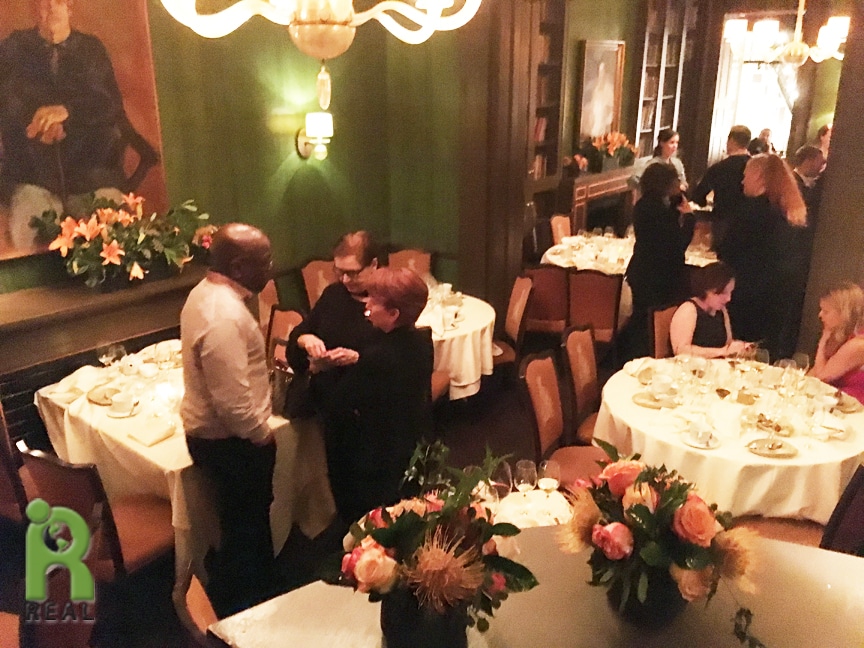 After all the hard work, the chefs looked happy and relaxed. 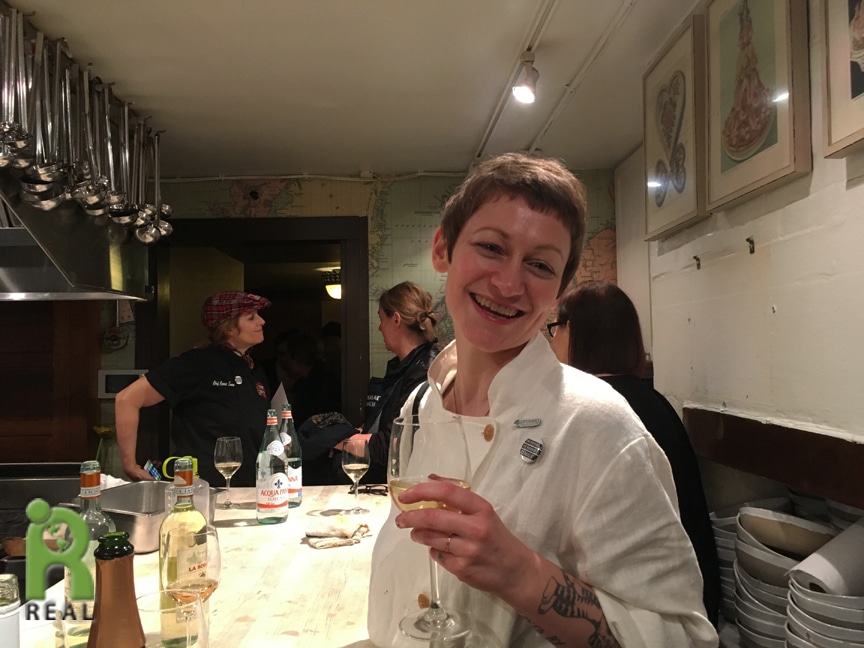 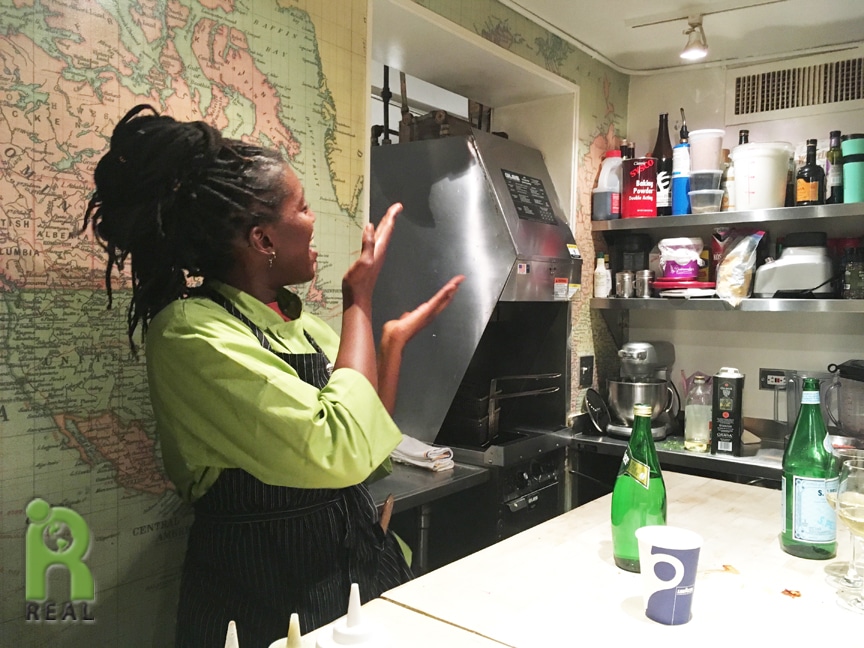 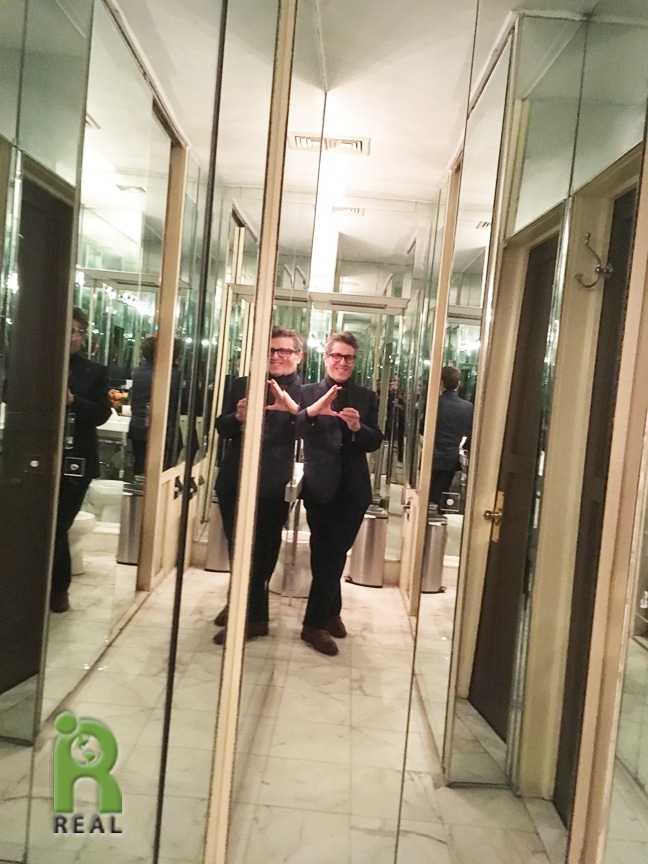 Did I say there was wine? There was a different one for each course. We drank a lot…hence the picture of Gary in the mirrored bathroom. 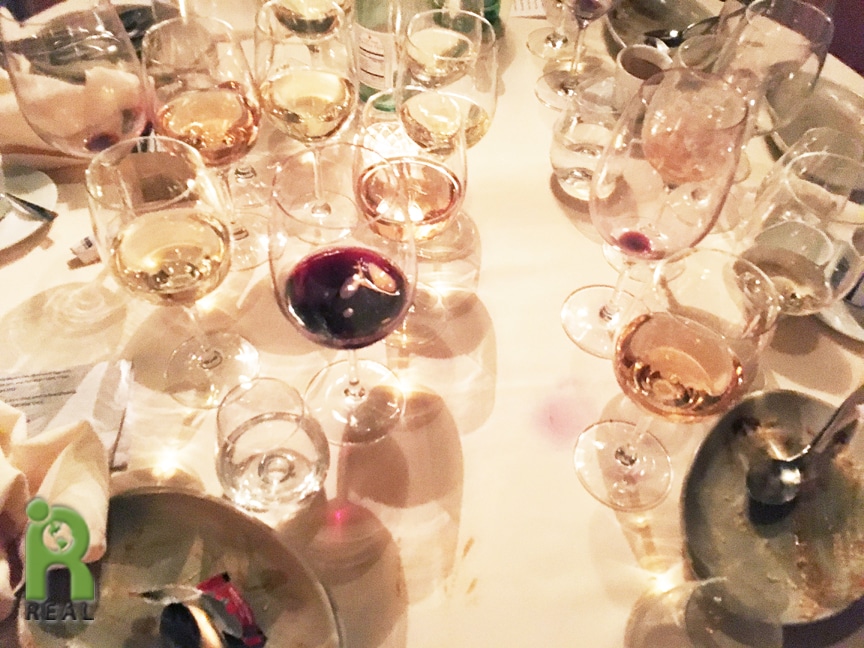 When we left, we were each given a black gift bag. This is what was inside. 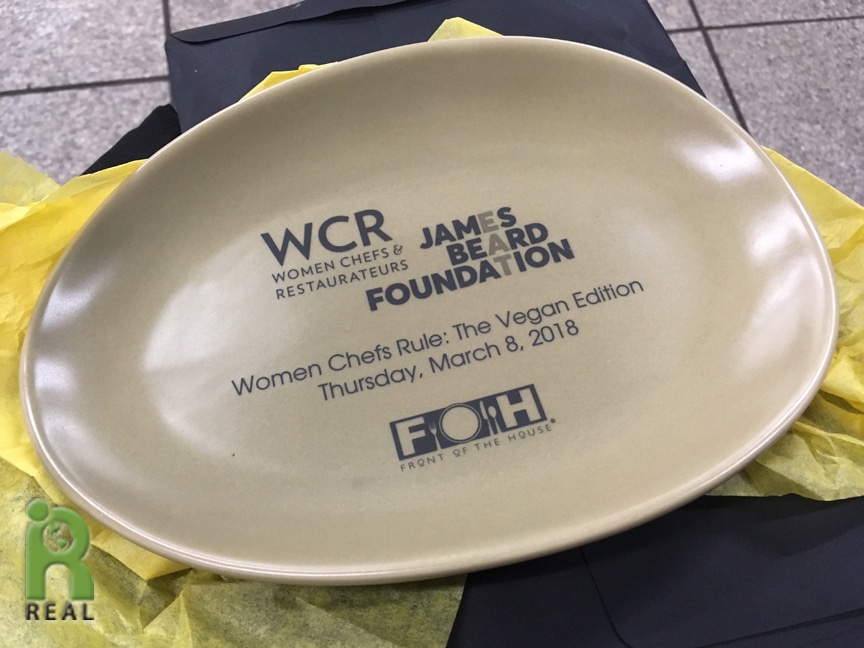 Oh what a night! We walked to the subway to catch a ride home. 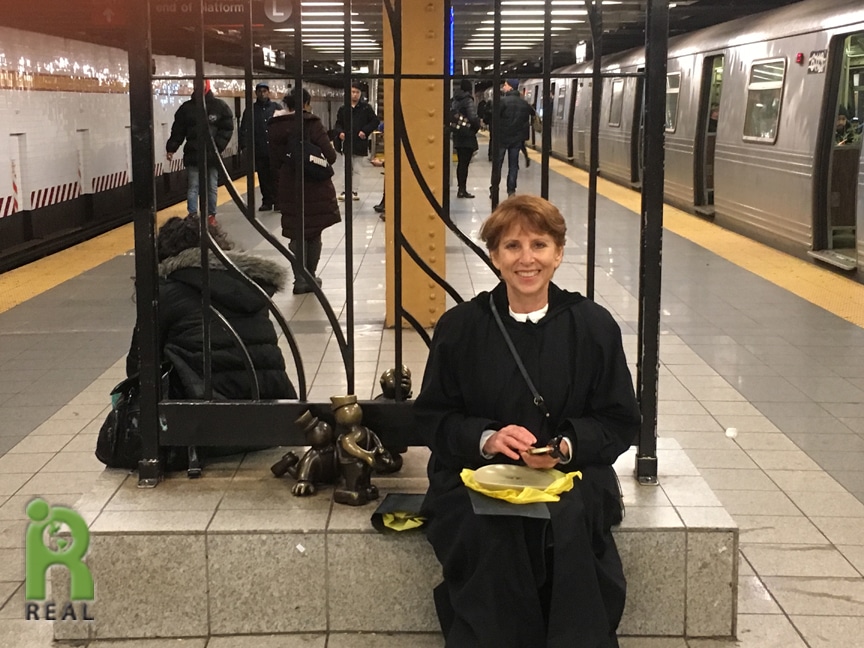