Breakfast: Gary had informed me last night that he saw a post on Facebook by my old friend Robert Klitzman saying he was in Quebec. I called Bob right away and found out he spoke at a conference and was staying at the Fairmont Le Château Frontenac which was around the corner from where we were staying. He was leaving today but we agreed to meet early in the morning for coffee. We sat in the ballroom set up for breakfast for the conference attendees. I had hot tea and yes, they had soy milk! I also took a small cup of fresh fruit – cantaloupe and honey dew. It was wonderful to see him and speak a little French. We met in the sixth grade and were in French class together all during junior high school. 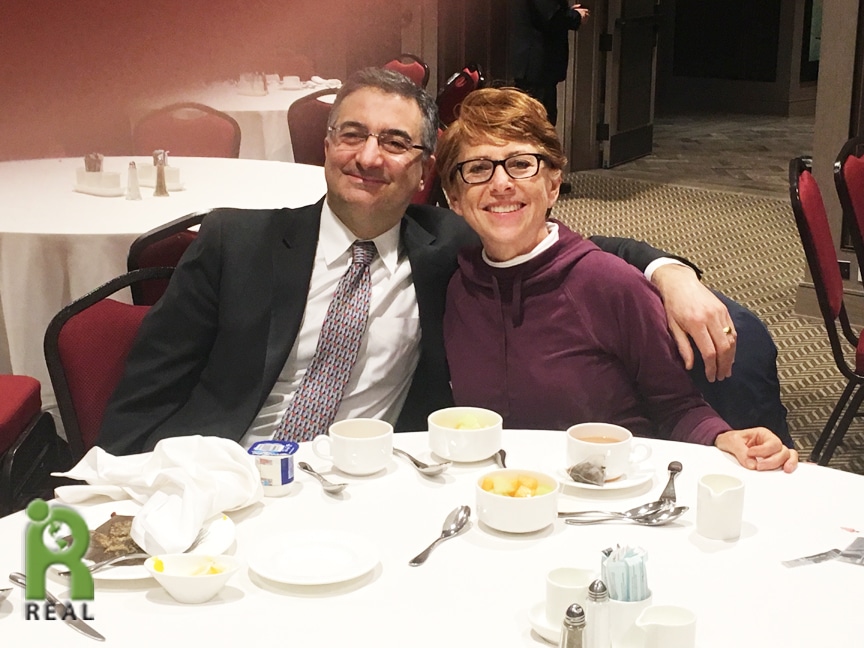 Deo has mastered cooking the Steel Cut Oats in individual mugs in the microwave. She poured boiling water in each of the cups and let them set before heating them slowly in the microwave, removing them every few minutes to give them each a stir. We added the dried Apricots, Raisins and Bananas towards the end of the cooking process.

Lunch: It’s cold today! We’ve had beautiful weather since we arrive but today was not only chilly but windy. We walked to Avenue St. Jean to LOUCAS for some hot Lentil Soup. 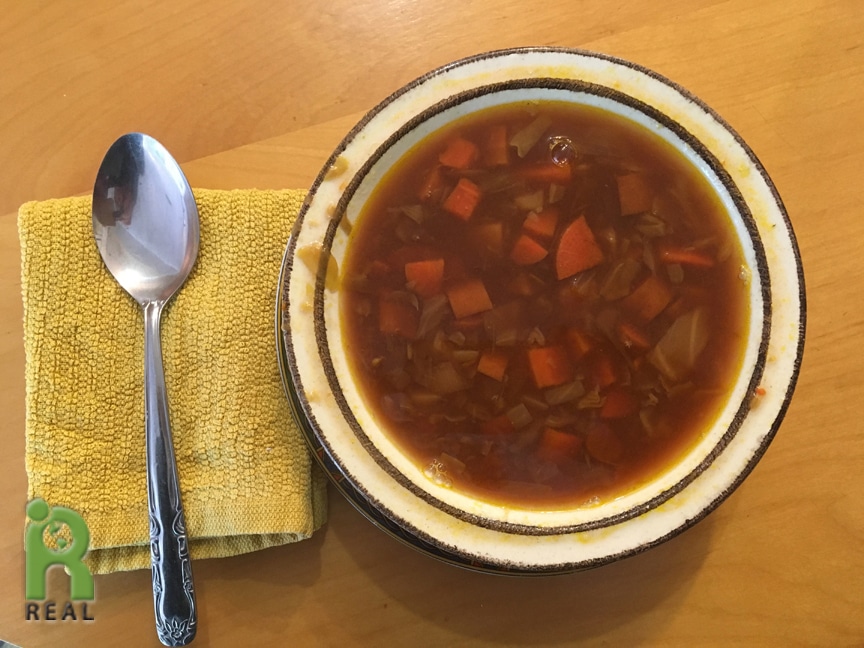 The soup was enough to fill the momentary void but I needed more food. We walked in the opposite direction to Casse-Crepe. I loved it there last night for a dessert crepe. Now I was ready to try their savory offerings. You get to choose your fillings at this restaurant which is how I like it. I chose Spinach, Mushrooms, Onions and Tomato Sauce. You can’t see them, but they were there. This crepe was merveilleuse! 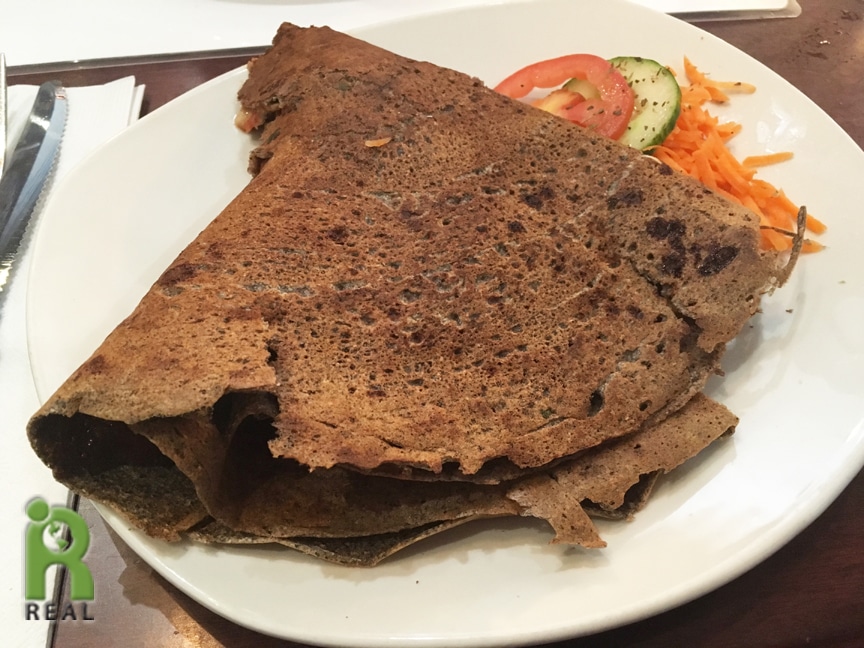 Deo had a coffee with Soy Milk and I chose the Hot Chocolate, made with Cocoa Powder, Sugar and water. 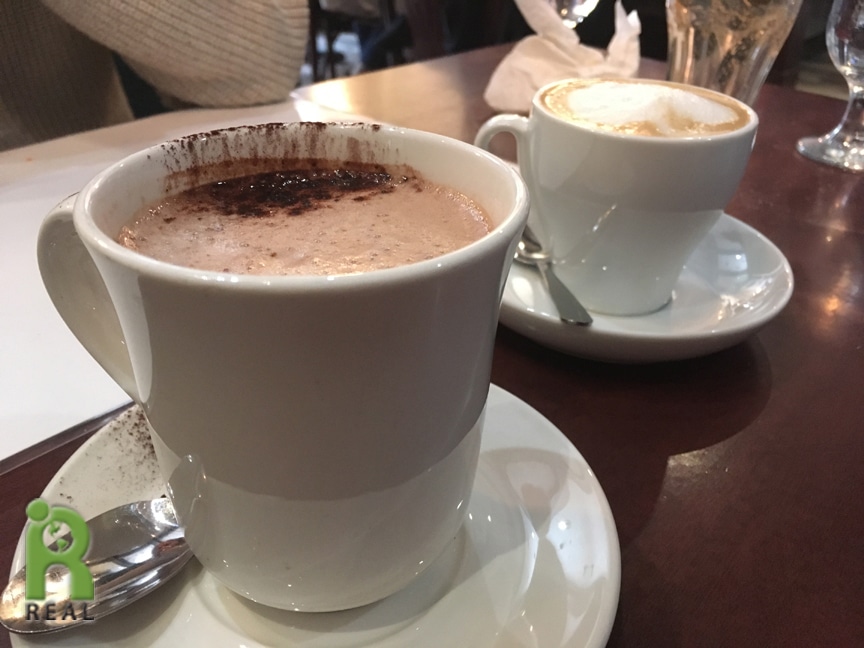 Dinner: We spent the afternoon inside, catching up on a little work and resting. Tonight would be our last night in Quebec and we were excited to dine at the Tournebroche Bistro. Not only did they boast a 3-course vegan menu, they had a roof garden where they grew vegetable and fresh herbs. The vegetables came from their rooftop garden as well as local organic farms. 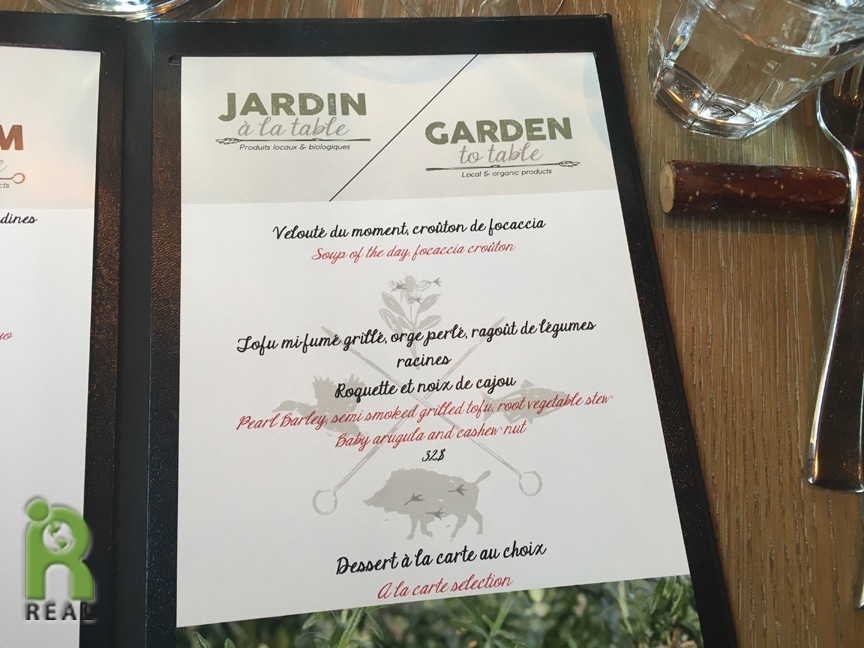 The interior of the restaurant was lovely. 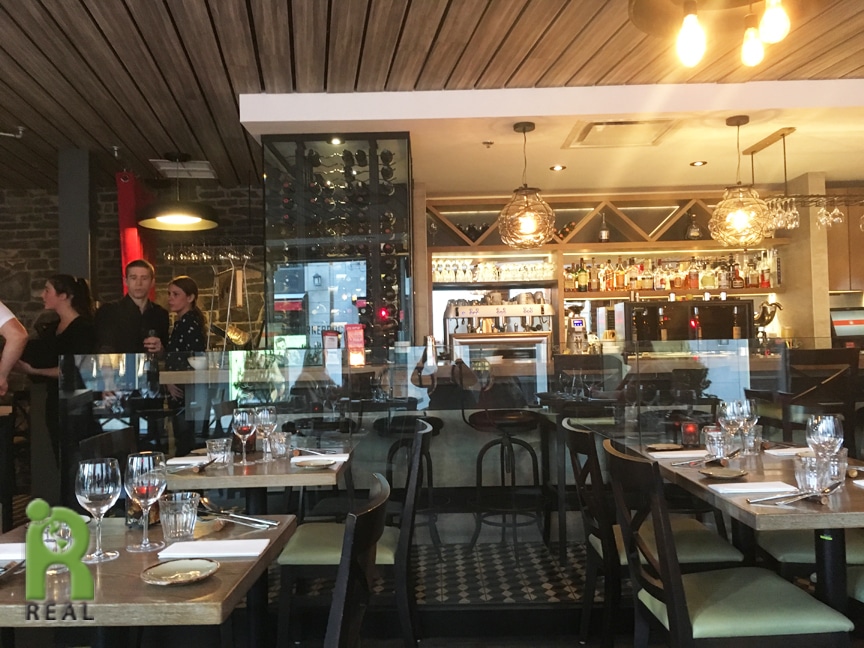 We started with and organic red wine. A plate with baguette slices and butter was placed on the table. I asked for a vegan alternative to the butter and the server quickly brought a plate with Olive Oil and Balsamic Vinegar. I don’t eat bread often and I have been avoiding wheat but on this trip I have been indulging! 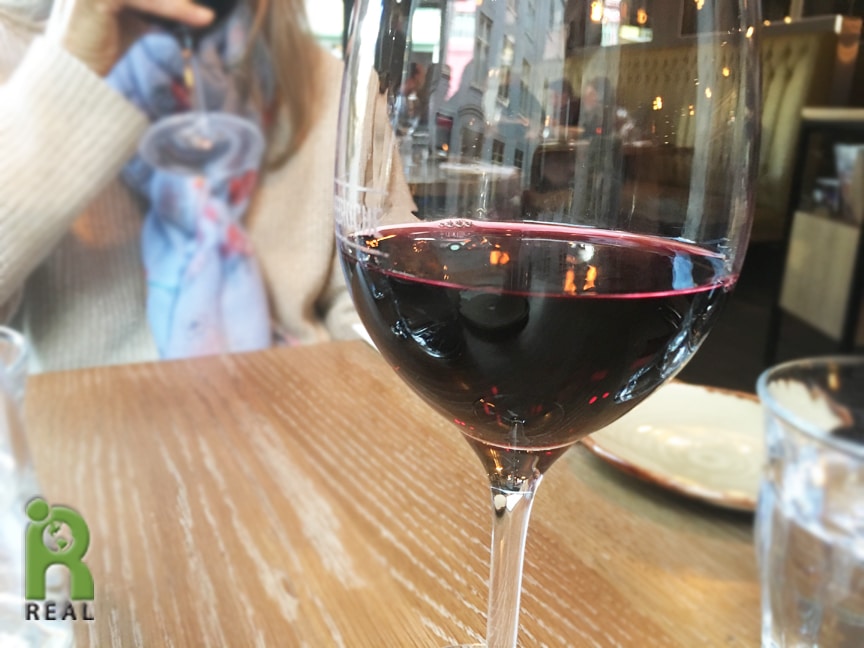 The first course was a creamy soup made with Celery Root and Honey. The vegan server explained the honey came from the bees in their rooftop garden. He offered in place of the soup a fresh salad and we both jumped at that. I am glad we did. The carrots and radishes were sliced thin and we savored every bit. Savoring the cubes of beets, we tried to guess the seasonings they were cooked with. There was cumin, the server confirmed that, and rosemary. Deliceux! 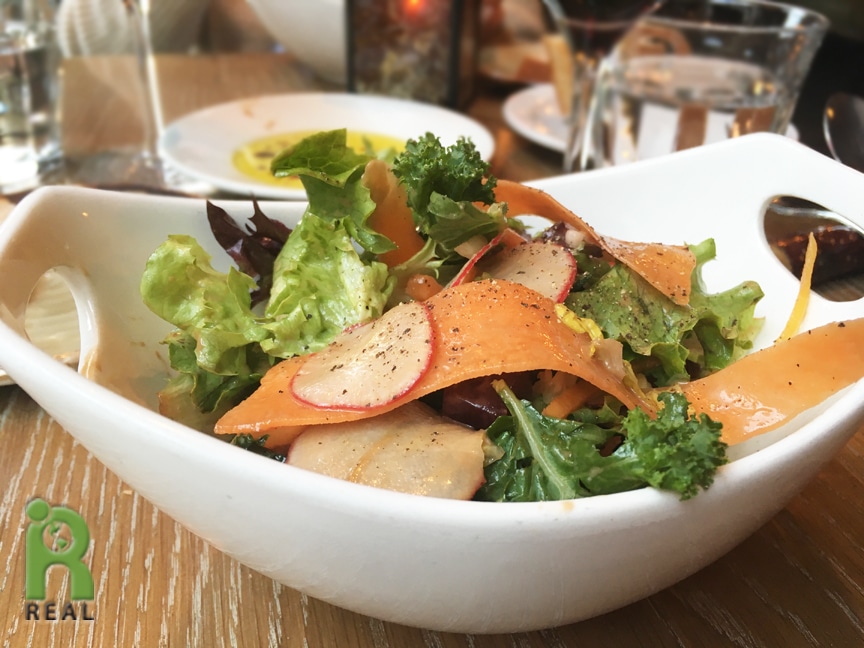 Our dinner consisted of grilled Tofu Steaks, some smaller tofu cubes, Beets, Carrots and Arugula on a bed of Barley. The barley had been cooked with a roasted vegetable based. We noted how the tofu cubes had more flavor than the tofu steaks, but everything was excellent. 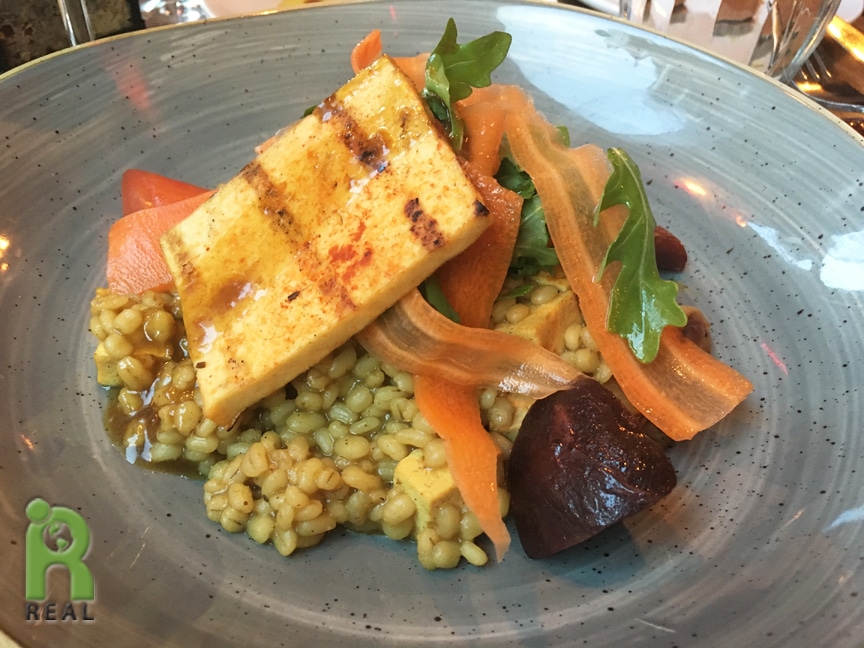 We had a choice of vegan Chocolate Cake for dessert or a Maple Lollipop. The cake was the obvious choice. It was frosted with a light chocolate mousse which I suspected was made with aquafaba. This dinner did not disappoint. The company, ambience, service and food were perfect. 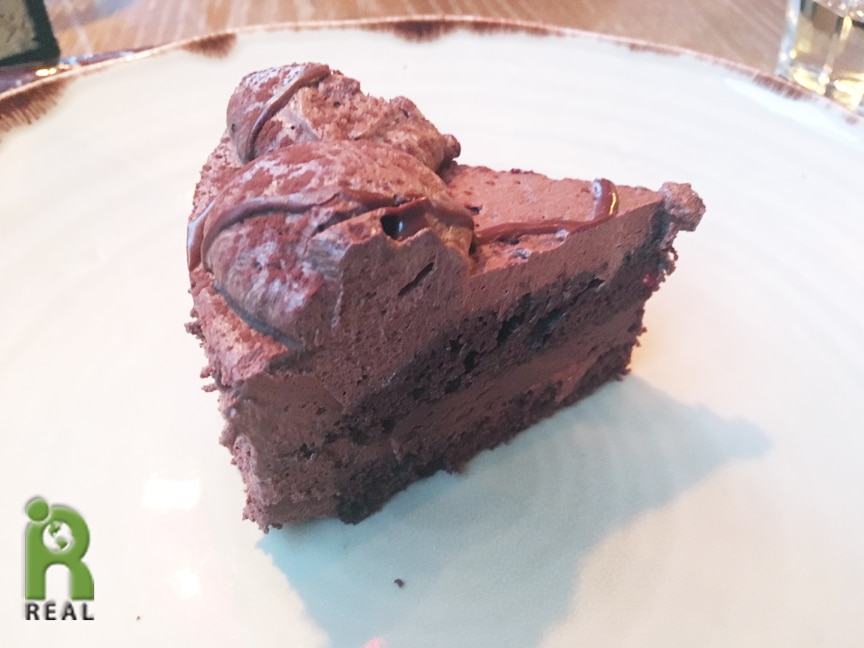