Morning Tea: I was struggling today, hit with too many challenges. I have jungle property in Costa Rica that I hope to build a simple house on one day. In the meantime, I have to keep up with taxes and the laws keep changing. I realized I have forms to process and fees to pay and it was making me upset. Plus I was hearing from friends and family members going through their own life challenges. I wanted to burst. Gary, sensing my angst, served me a loving cup of Teeccino with Soy Foam. 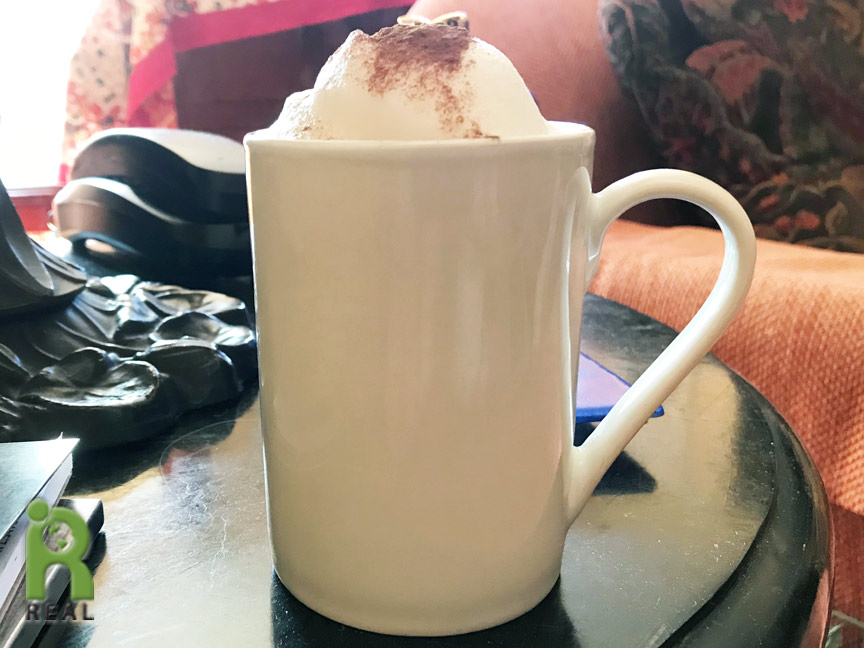 First Meal: Feeling sad and not very hungry, I sat with Gary to eat. First, some Rice Cakes with homemade Hummus. 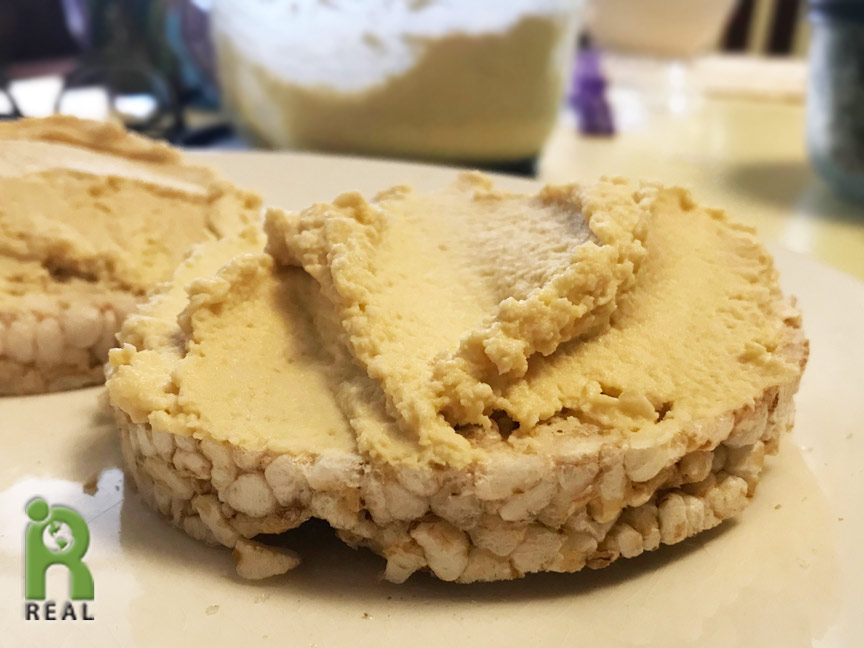 Then some leftover Kale Salad with Tomatoes. I focused on chewing. I didn’t want to think about anything else. 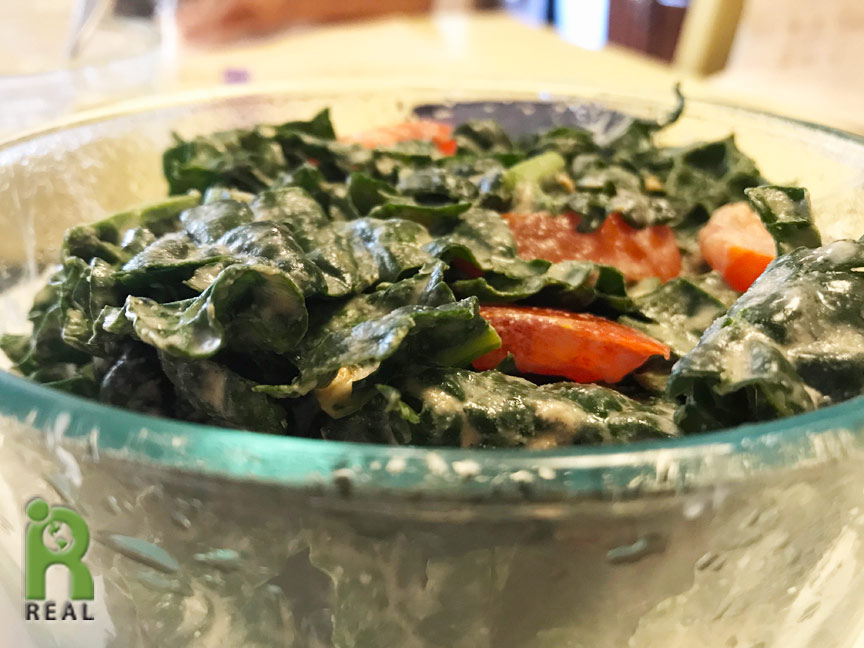 We went out on our daily long walk around Forest Hills Gardens. There are some very lovely spots and the weather was perfect. I was hoping it would lift my mood a bit. It did a little but not much. When we got home, I sulked a little. What should we do today? What should we do tonight? We took a little nap on the couch. When I got up, I revived myself in the bath. This always feels luxurious to me. When I got out, I dressed and told Gary to take me to the playground. The Playground? That’s Manhattan! We got on the train with no plan. In a fast 15 minutes we were on that magical island. We walked south through Koreatown and down past the Flat Iron Building. It was a beautiful night. We walked and talked and looked around. We were getting hungry and we thought about where we might eat. I wanted to try something new. First we stopped at Matthew Kenney’s XYST on 17th Street for Mediterranean-inspired food. I have to admit that I am not a huge fan of the restaurants of his I have been to. I had loved Pure Food & Wine back in the day when he opened it with his wife in 2004, before they divorced and she held on to it until its scandal-plagued demise. Since then the other restaurants of his I have tried tend to disappoint. The food seems pretentious. But I was willing to try another of his many venues. We looked at the menu at XYST. The aromas coming out of the restaurant smelled good but the description of the dishes did not speak to either of us. It looked like you would need to select lots of different pricey dishes in order to put together a satisfying meal. Perhaps another time. We left. We peered at the menu at the vegetarian restaurant Nix. Nope. This was not the place either. We considered going to Avant Garden and I read the menu from my phone. No, no, we didn’t want to go there either. Main dishes like Scorched Cauliflower or Hen of the Woods, a mushroom purée, didn’t sound satisfying tonight as a main dish and I don’t know if they ever would. By this time we were hungry. We had walked a lot today. We considered JaJaJa and Bodai Kosher Vegetarian, both favorites but they were relatively “far” from where we were. The Urban Vegan Kitchen was close by and we knew we’d be satisfied there. We moved our feet in the direction of the West Village. Now in NoHo we walked over to Washington Park. There was a group under the Washington Square Arch surrounding a grand piano with a pianist and singer. We stopped for a moment to listen. The park was alive! People were everywhere, talking, laughing, picnicking. Leaving the park from the southwest corner we were on MacDougal Street. This is where the party was! This spot was on fire. There were crowds of people waiting to get into comedy clubs and restaurants with outdoor seating. Summer in the City! We navigated through the sizzle and made it over to Carmine Street where things were a little calmer.

Second Meal: Yes! This is where we were meant to be. We love the edgy urban atmosphere and the fun music at Urban Vegan Kitchen. Gary chose the Classic BLT with Hand Cut Fries. He said it looked like a lot of toast but he was happy with what was inside. 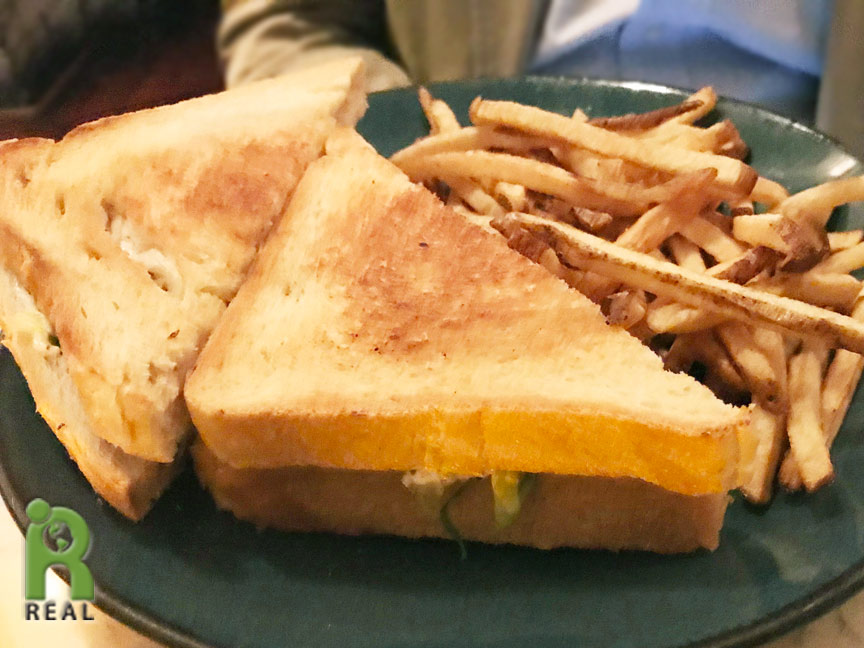 I was knocked over by the description of the UVK Quarter Pounder, a roasted Mushroom Barley Patty with all kinds of gooey fixins’. And I upgraded to the Super Dope Burger option with Chili, Cashew Cheese Sauce, Jalapenos and Sour Cream and also added Shiitake Bacon. It was SUPA DOPE!! All the servers were eying my dish and smiling. Everyone loves this dish! We were very happy with our choices. 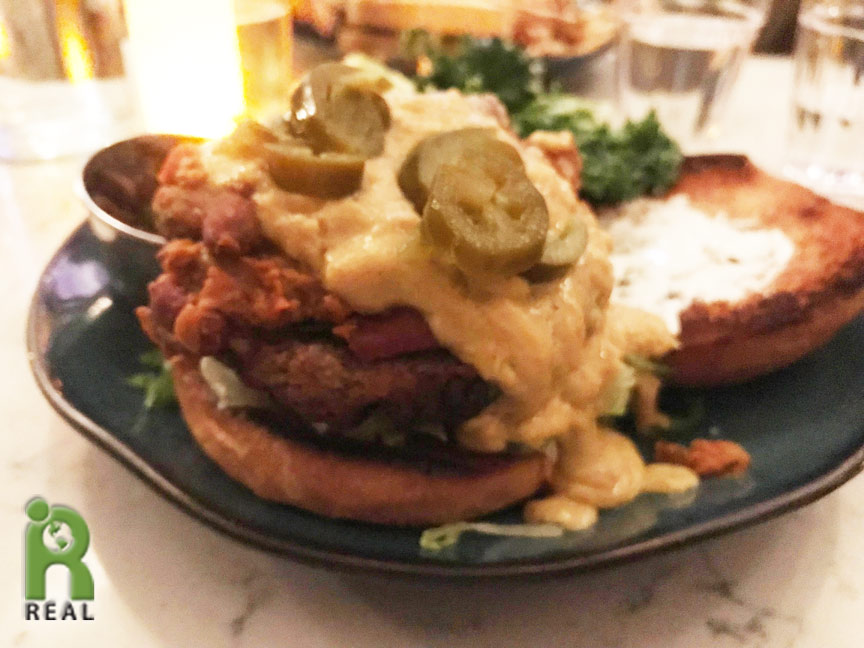 Dessert: We didn’t get dessert because I knew a Van Leeuen Ice Cream shop was near. They have Vegan Ice Cream. There was a line of course and it was worth the wait. I had the Mint Chip and Brownie flavors. Gary had Salted Caramel and Chocolate Chip Cookie Dough. 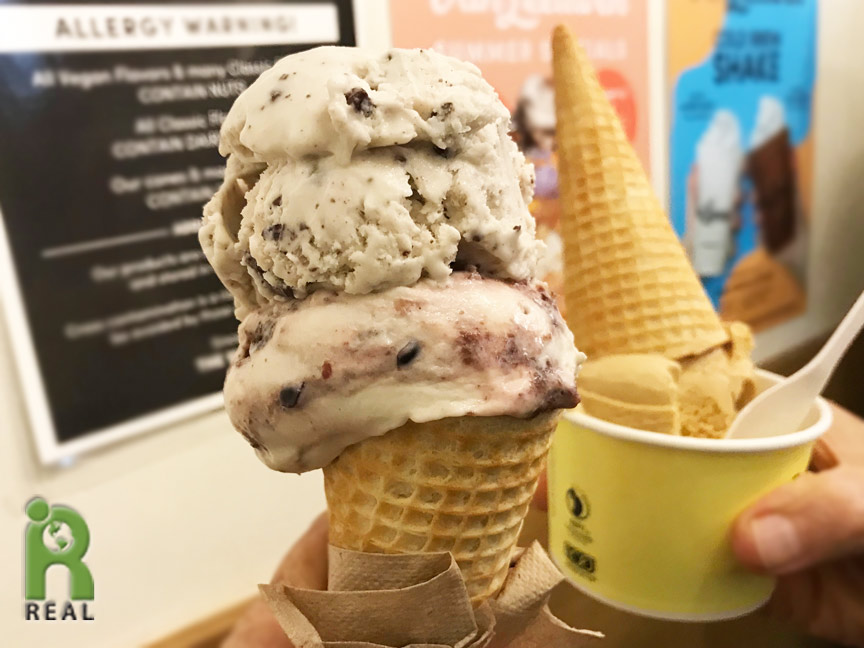 We walked about thirty blocks back to the train. We had walked about 5 miles on this adventure and that doesn’t count the earlier walk we went on. We enjoy eating rich and then walking it off. The train was waiting for us when we arrived. The timing was perfect. As we rode home, I realized I was happy. I got through the struggle and am ready for another day.