First Meal: This morning we had plans to meet Gary’s cousin Lou and his wife Amy for brunch. They live in Sausalito and come to NY frequently. Amy, a new vegan, wanted to meet at Peace Foods. We are still not on the NY time zone and waking up at 9am was brutal. We got to the restaurant on time at 10:59am for an 11am date. Then Gary realized we were early and everyone was coming somewhere between 11:30a and noon. We got a table and sat down and enjoyed hot drinks. Gary had the Ginger Soy Latte and I chose the Brazilian Chat Latte. The server told me the Chai Latte comes with Cashew Almond milk instead of Brazil Nut Milk. I somehow remember that they have not been serving Brazil Nut Milk for a long time now but apparently the laminated menus have not been changed. I was a bit disappointed with the drink. It tasted like it had Lapsang souchong tea in it which I was not in the mood for. Now, Lapsang souchong tea is an expensive tea, and it has a resiny aroma and taste that comes from the pinewood that is used as the firewood for smoking, so there are times when I am in the mood for it but today was not one of those times. “Resiny” is a nice way to describe the asphalt-like flavor. 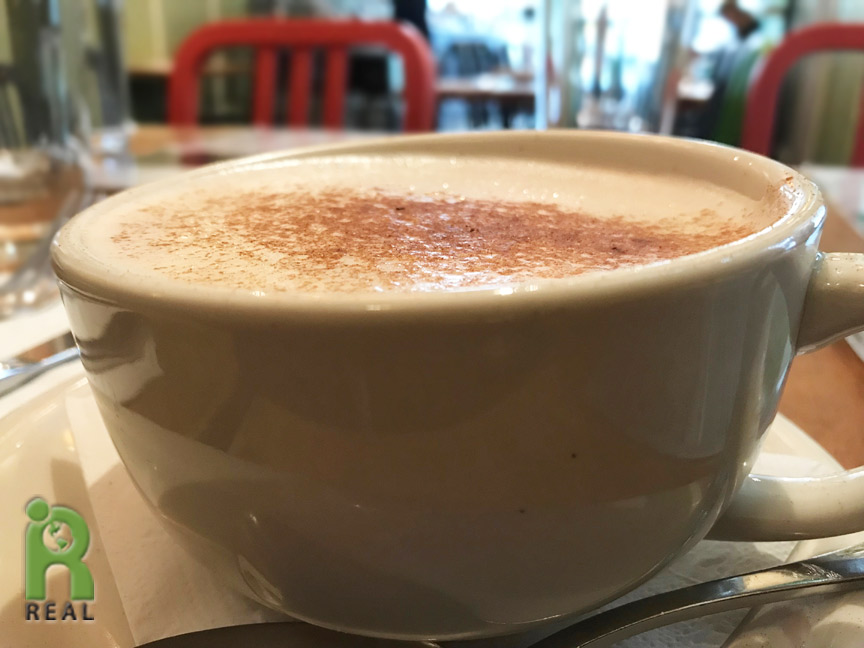 There were nine of us for brunch. It was a star-studded event with a renowned composer and his wife, a curator for the American Museum of Natural History and his wife and young son, and a best-selling author and her husband, plus me and Gary. The conversation included veganism, the arts and politics. I had one of the special seasonal items, a savory Pumpkin Quiche with Salad. It was very yummy. One of the guests ordered the Mushroom Duxelle Pizza with Roasted Sweet Peppers, Onions and Zucchini, He had to leave early and offered the remaining half to the rest of us. I had a slice. It was a very satisfying few big mouthfuls of mushroomy goodness. 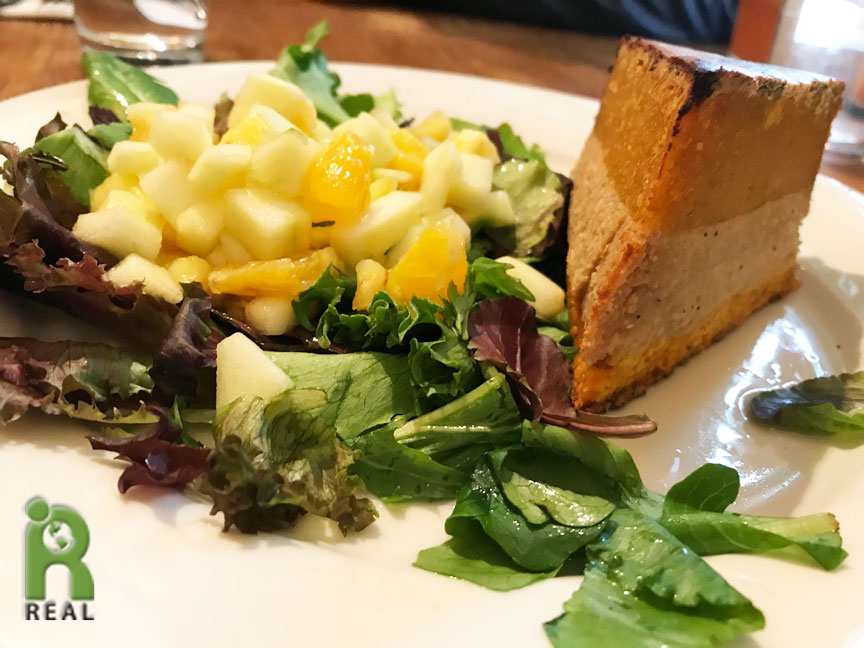 Gary, our favorite burger boy, had the Vegan Cheese Burger: Gardein Protein Patty served on house made Focaccia bread with Daiya Cheese, Avocado, Garden Blend Sprouts, Jalapeno, Lettuce, Pickles & Caramelized Onions. He made the announcement that this is his favorite commercial burger, better than the Beyond Burger. 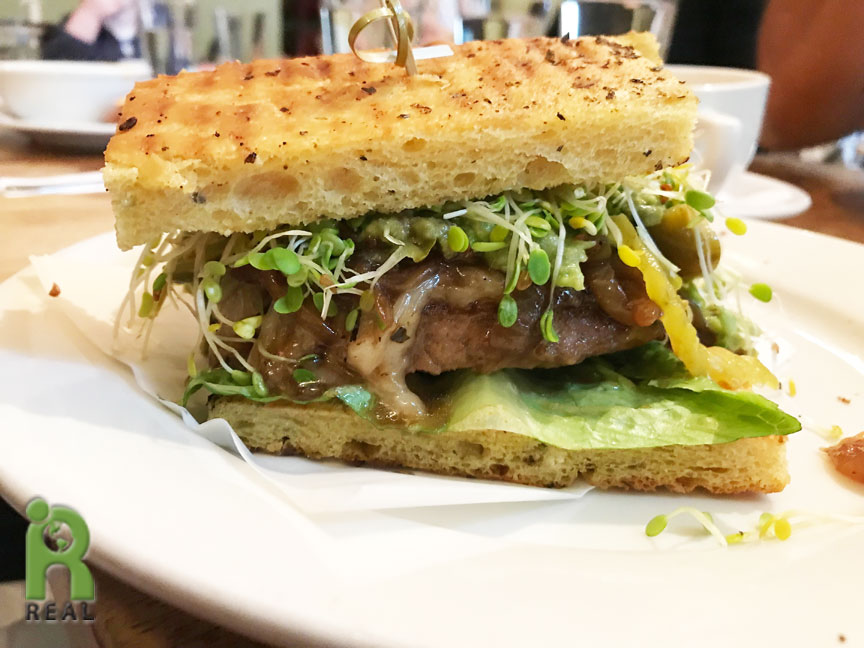 A few of us finished up with Ginger Soy Lattes. I wanted one since my first beverage was a bit disappointing. This one was a winner.

We got home in time for me to record my podcast for the day. I spoke with Annabel Park on the new Healthy Campaign program. Afterwards Gary and I took a long nap. We’re exhausted! We woke up hungry and Gary took care of dinner. He reheated the remaining Kale/Carrot/Onion Glass Noodle Soup. 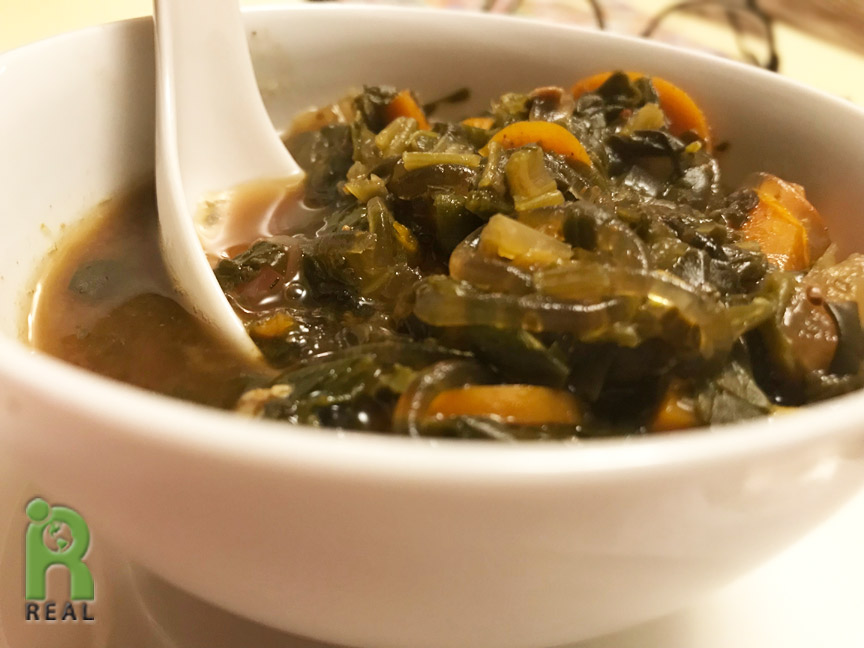 Per my request he made a Kale, Corn and Onion dish to follow plus Baked Sweet Potatoes. 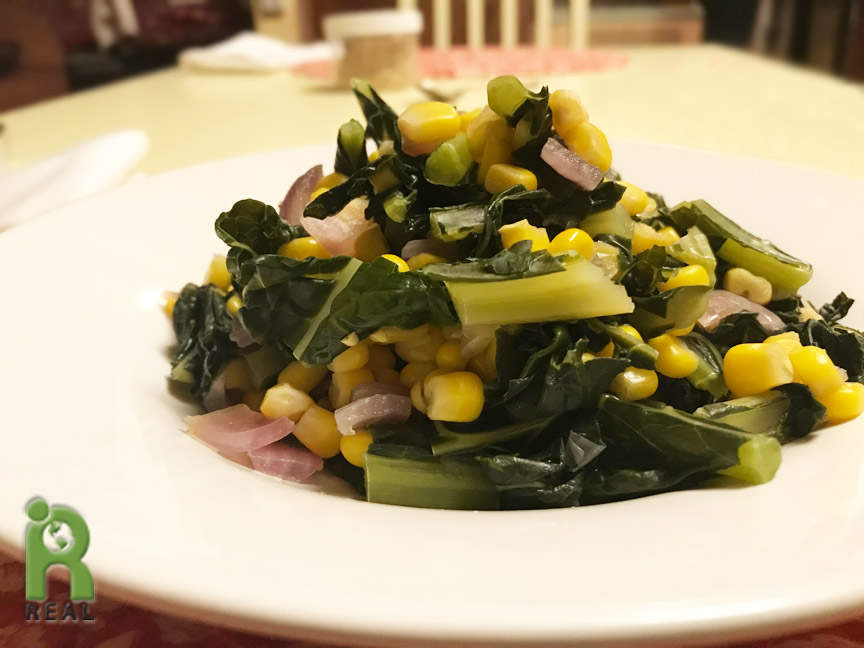