I began the day slowly like I like to, with some tea and writing my pages for the Artist’s Way course Gary and I have started. I wasn’t hungry and so I didn’t eat. Gary and I took off for our walk around 12:30 or 1pm. A neighbor joined us for part of the walk. When we had about a third of the walk left to go, about 20 minutes, I checked my phone. I had received a text message from my friend and author, Linda Long. She had purchased a ticket for this evening’s event at the James Beard Foundation featuring Chef Tal Ronnen. Linda had photographed the food in Tal’s first cookbook and she really wanted to go. She had told me when she bought it and I considered going with Gary. It was expensive and I put it off and then it was sold out. Now Linda was sick and offering me her ticket. What to do? I called the James Beard Foundation to see if I might get a ticket for Gary even though the event was advertised as sold out. I was successful! Now Gary and I would be able to go. I was happy and sad. I wanted to go and I know Linda really wanted to go but couldn’t.

First Meal: When we got home from our walk we got a few things done for the day and Gary made a meal. We started with Kale Salad and since we had it, and I remembered, I added a lot of fresh Mint to mine. I love mint in salads. 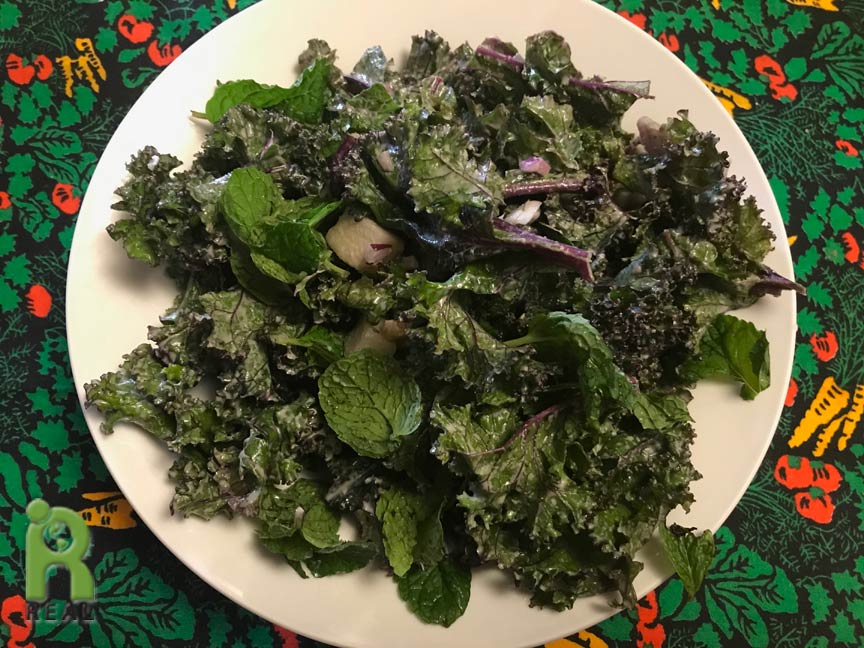 Gary tried and experiment. I don’t like wasting Kale or Collard Stems, they are so nutritious. Sometimes I chop them up like celery and include them in the salad or sauté we are having. At Bareburger recently I had Collard Fries. They were breaded and fried Collard Stems and very good. Gary made a go of baking Kale Stems. I liked them, he said they were like tree bark. We’ll continue to work on this one! 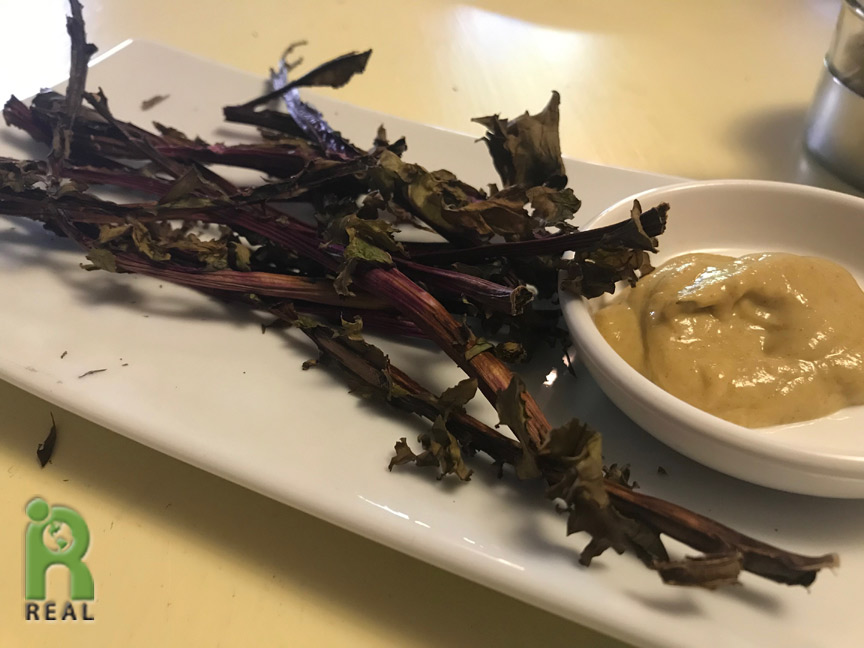 The Baked Yellow and Purple Sweet Potatoes were delicious as always and filled us up. 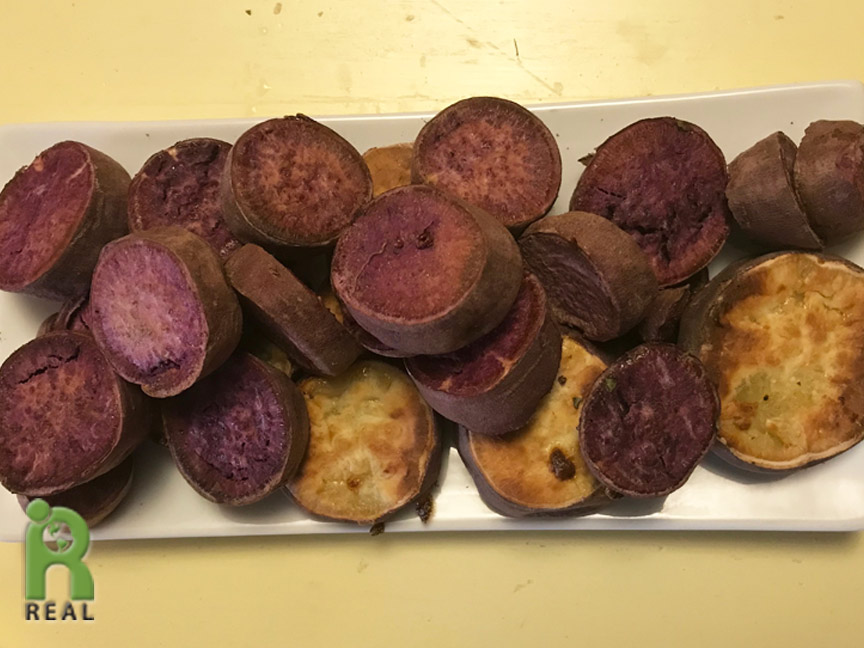 Second Meal: The evening was lovely, the weather perfect. We arrived at the Beard House and saw some friends right away, Benay Vynerib (long-time manager at Candle 79) and author, Fran Costigan. We had hor d’oeuvres: Hearts of Palm Cakes with Horseradish Aïoli, Almond–Boursin Crêpes with Fig Mostarda and Smoked Carrot Lox with Almond Crème Fraîche and Kelp Caviar. All yummy. The Champagne Perrier-Jouët Brut NV was perfection. 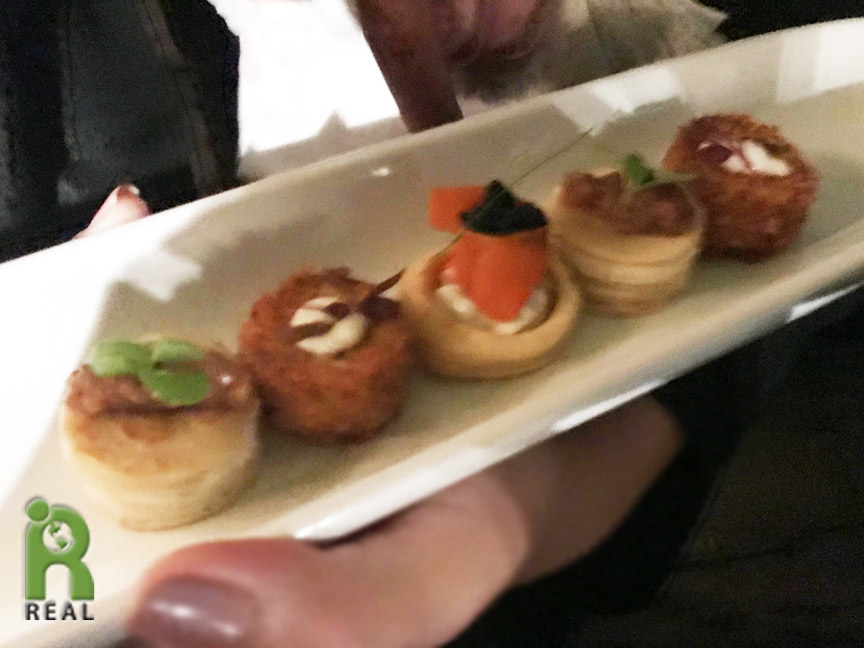 We were seated upstairs. There were many tables of different sizes, Gary and I were at a romantic table for two. How lucky could we get. Here’s the menu. 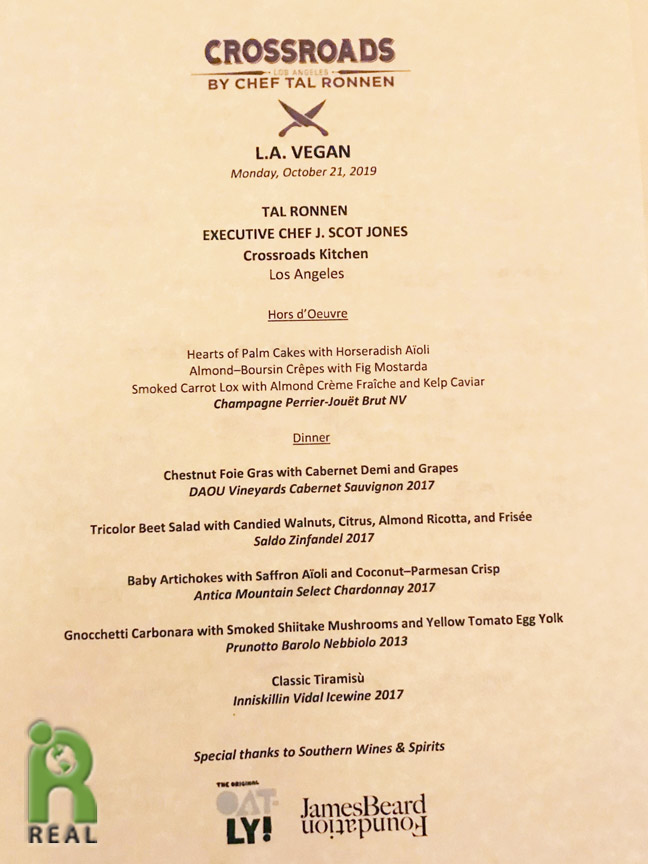 We each got a lot of forks and knives! One for each course of course. 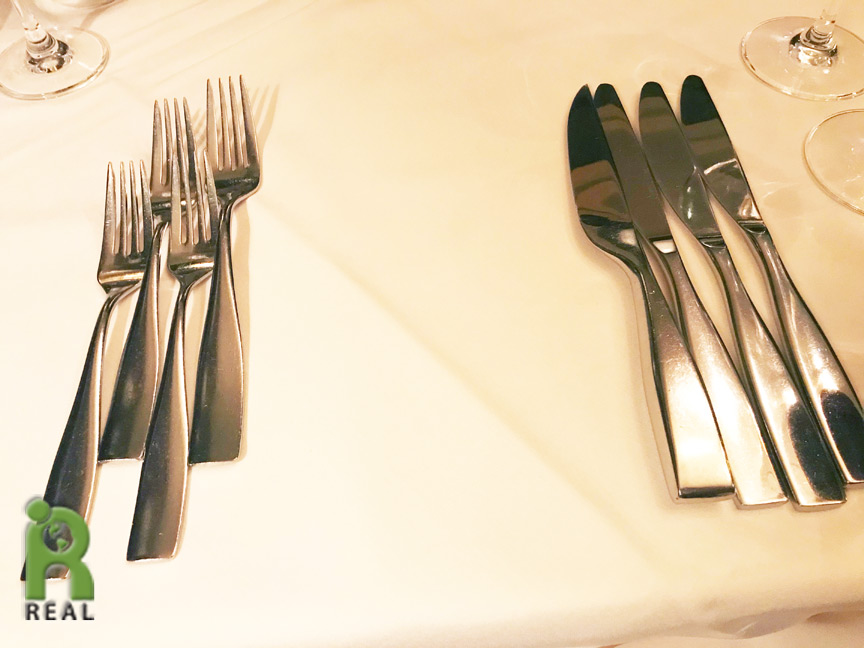 Here is the Chestnut Foie Gras with Cabernet Demi and Grapes. It was silky smooth and full of flavor. It was paired with DAOU Vineyards Cabernet Sauvignon 2017, which was drinkable but not great. 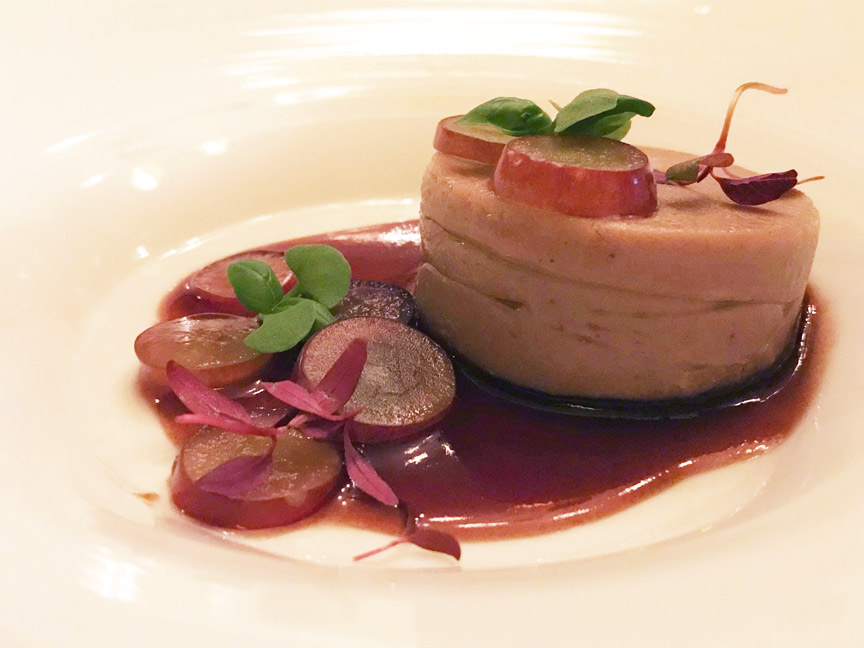 Gary was delighted with the bread it was served with. We don’t eat a lot of bread so this was a treat. 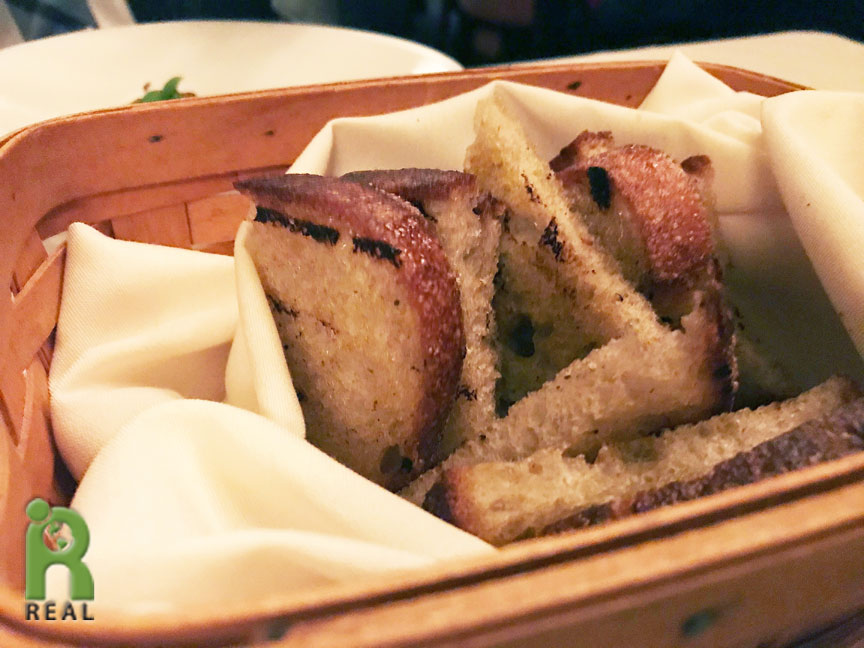 The next course was the Tricolor Beet Salad with Candied Walnuts, Citrus, Almond Ricotta, and Frisée. It was colorful, light and lovely. We don’t eat beets enough. I am making a mental note to eat more beets. This course was paired with the Saldo Zinfandel 2017, another drinkable but not great wine. 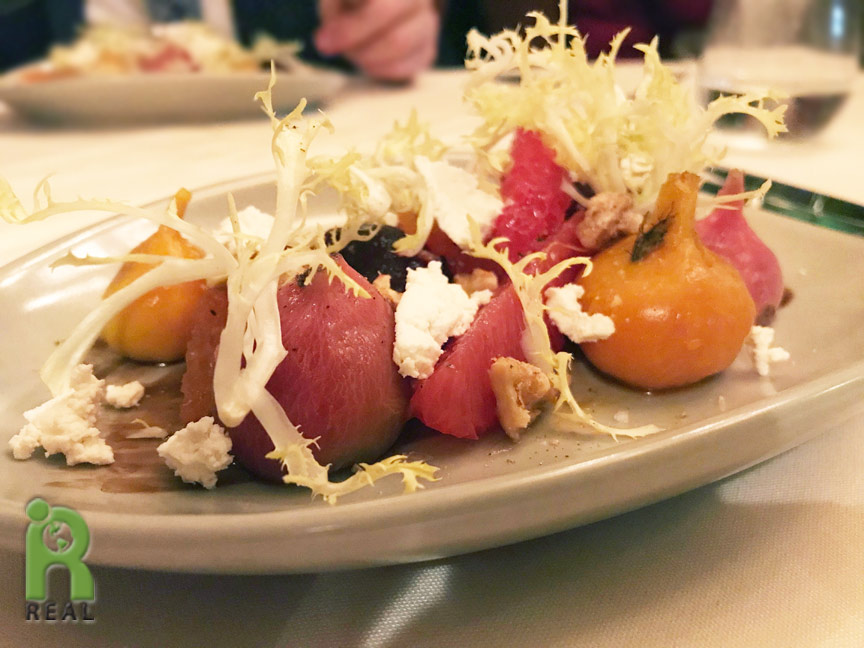 We are working with our third fork and knife set for the Baby Artichokes with Saffron Aïoli and Coconut–Parmesan Crisp. The highlight was the Coconut Parmesan Crisp. We want more of that! The artichokes were chewy, rubbery slivers that went down a lot more easily with the colorful Saffron Aïoli. The Antica Mountain Select Chardonnay 2017 that was chosen for this course was not drinkable. Not at all. It had a very strange taste. 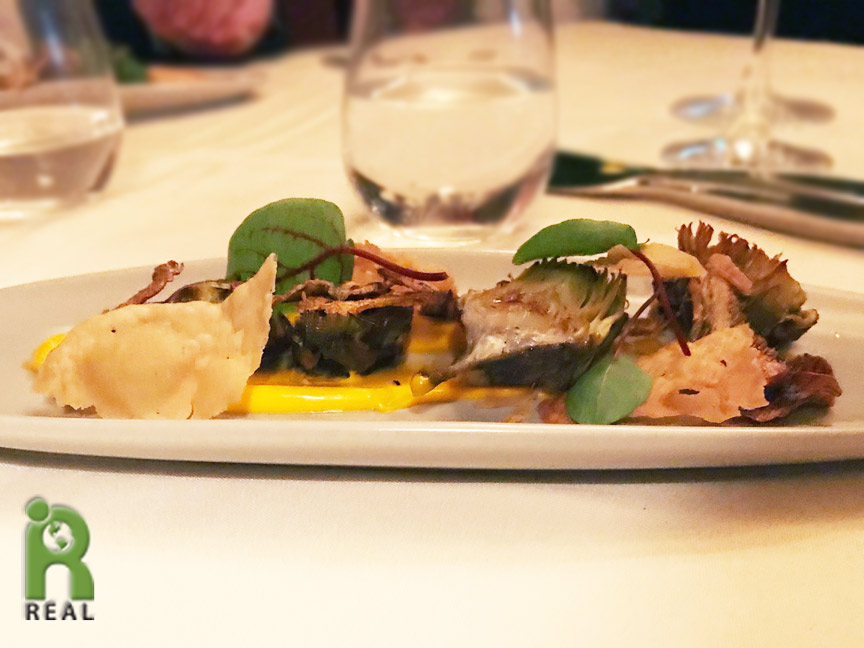 The surprise was the Gnocchetti Carbonara with Smoked Shiitake Mushrooms and Yellow Tomato Egg Yolk. This Tomato Egg Yolk is a specialty of Tal Ronnen’s featured at his Crossroads restaurant in Los Angeles. It looked like an egg yolk. It resisted poking and breaking like an egg yolk and then when it did break, it melted beautifully over the dish. There was nothing notable about the rest of the dish. The Yellow Tomato Egg Yolk stole the show. Prunotto Barolo Nebbiolo 2013 went with this course. It was the best of the four wines served. 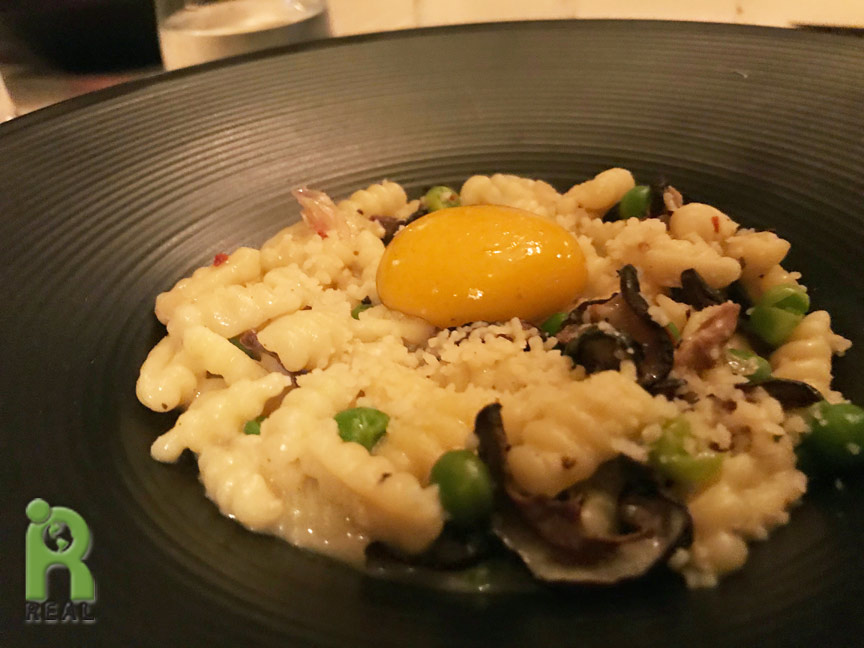 We didn’t drink as much as we did last year at another vegan event at the Beard House. These wines were just not very good. I suppose in one way that’s a good thing! We didn’t get sloppy drunk. I could have drank the Champagne all night. That was very good. 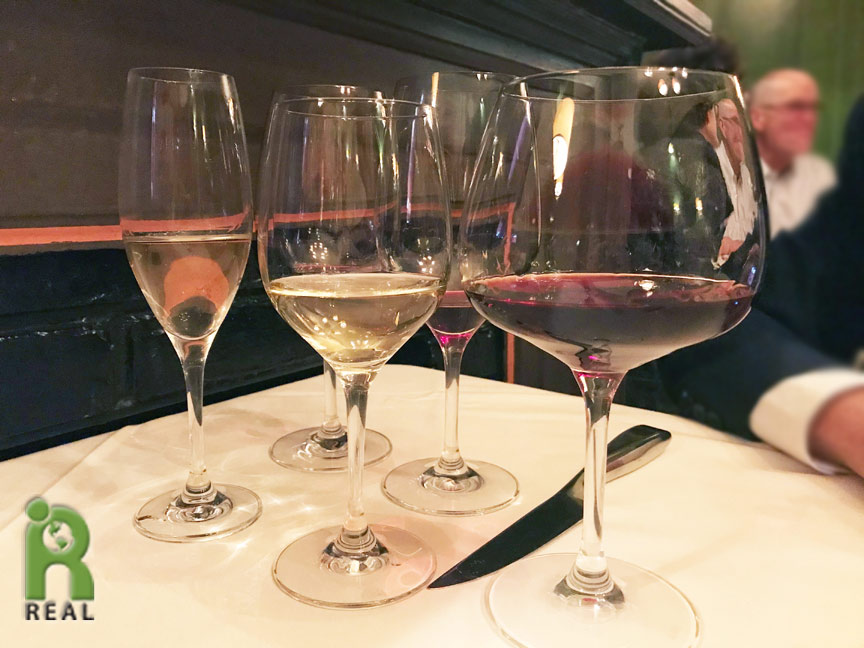 All the forks and knives used and collected it was time for dessert. Gary indulged in decaf Coffee and I had an Earl Grey Tea, with a tea bag served in an “elegant” package. You know how I feel about tea in bags, especially “silk” ones that are made of plastic, don’t you? #BringBackLooseLeafTea Was the box necessary? It was a bit overpackaged in my opinion. This is the same brand they served last year. I remember it well. 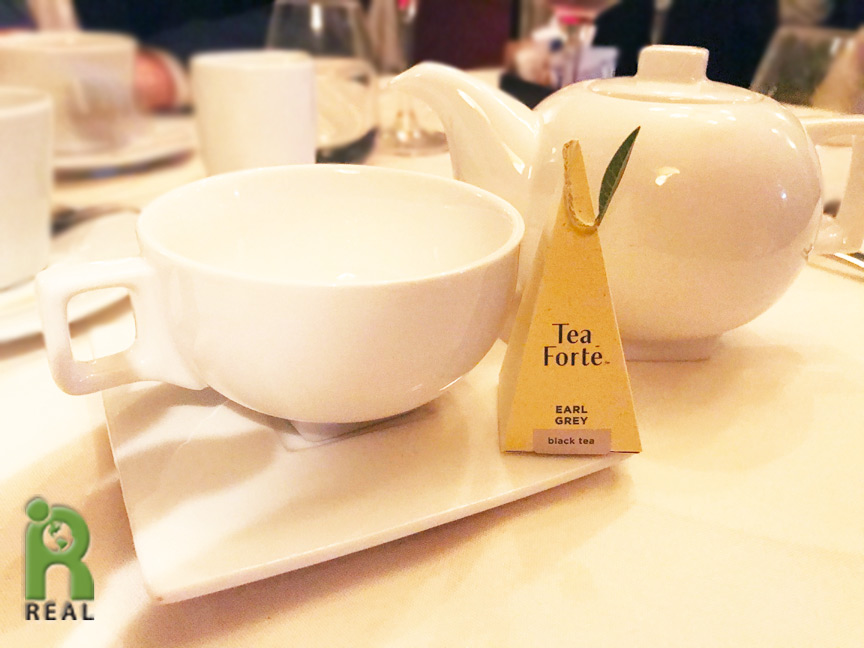 The preparation for the dessert was aided by the help of Fran Costigan who trained in from Philadelphia earlier in the day for the event. She also made the very tasty little chocolate bites that accompanied the Classic Tiramisù. Unfortunately, the dessert missed its mark. It was not sweet and not classic at all. The Finger Lady Cake was more like a tough biscuit. We sampled the Inniskillin Vidal Icewine 2017, a sweet dessert wine. 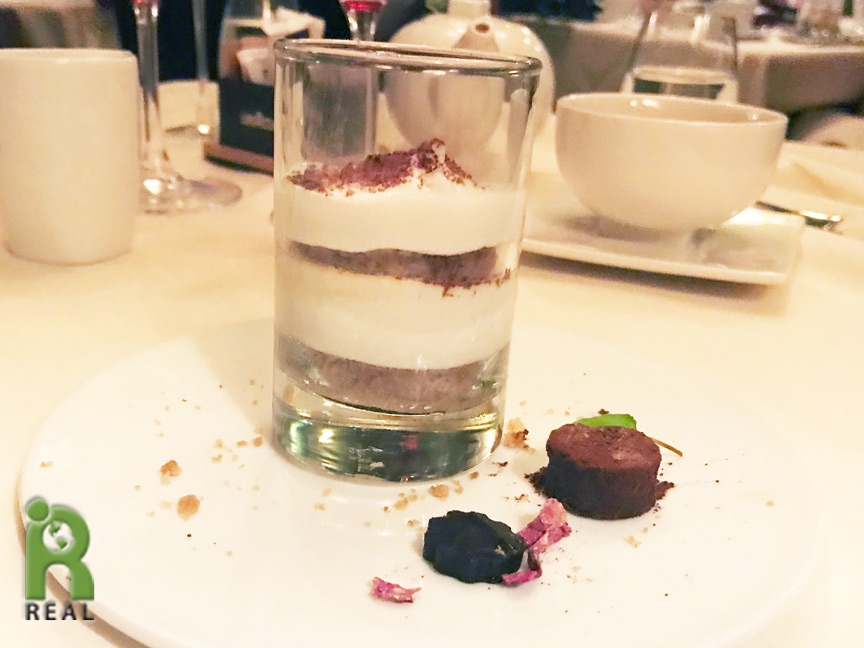 What a fun night! I wanted to go and in the end I got my wish.