Breakfast: I was flying to Costa Rica. I got up at 4am to take the subway at 5am , then a bus to the airport. Gary had made a lovely cornbread the night before with the blueberry coconut milk sauce he had made the other day. He poured the sauce and marbleized it in the batter. I call it Marbelous Cornbread! We each had a slice before I left. I also had some green juice made with kale, celery, carrots and lime. I won’t be having another green juice until I come back home! 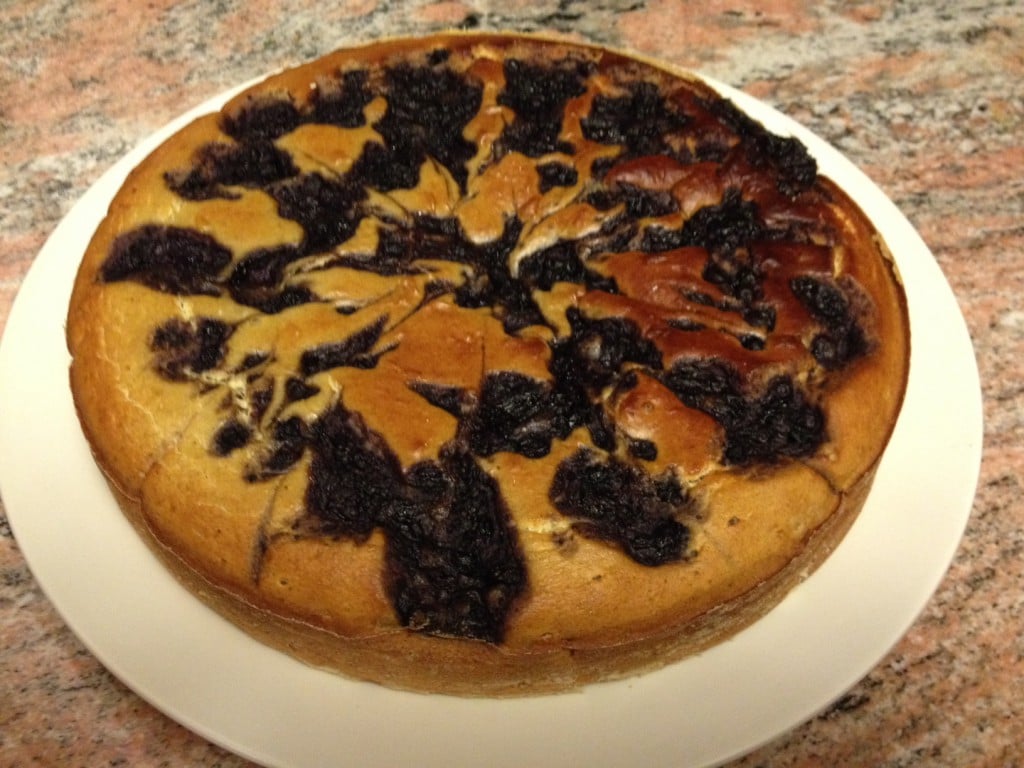 Lunch: During the flight I devoured the Fritatta from yesterday and Cornbread Gary packaged for my trip. 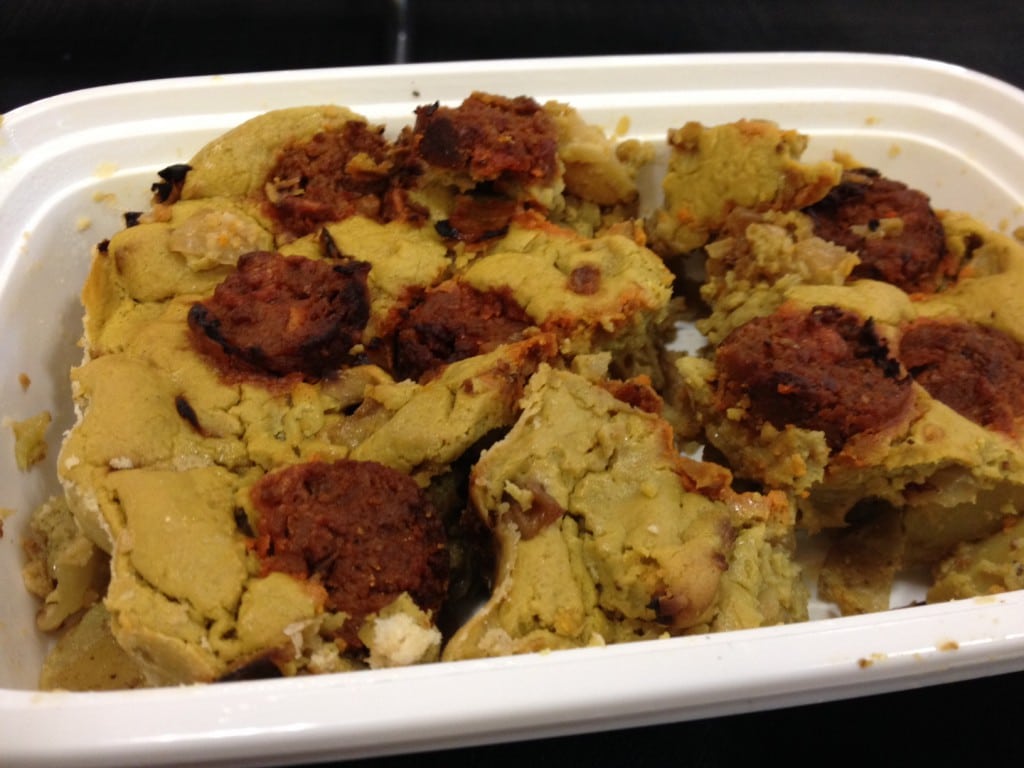 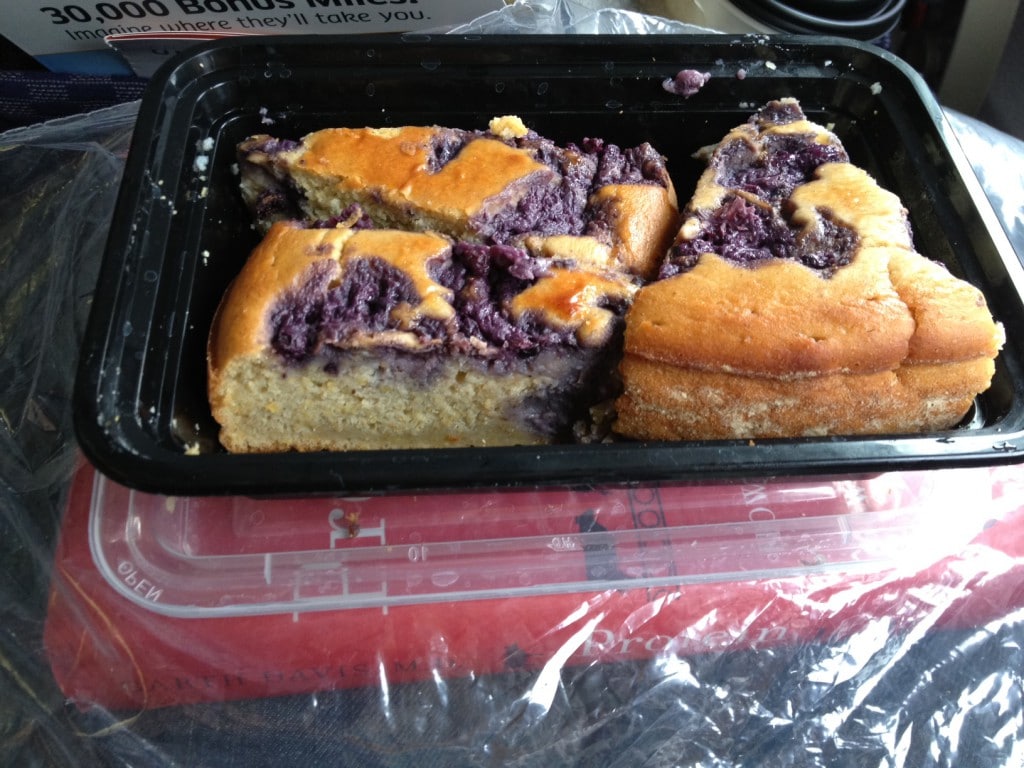 Dinner: I was delighted to find a grocery store across from my hotel San Jose, Costa Rica. It had been a long day and all I wanted was some local, fresh fruit. I picked up a big papaya, a big, juicy mango and an avocado and devoured them quickly. 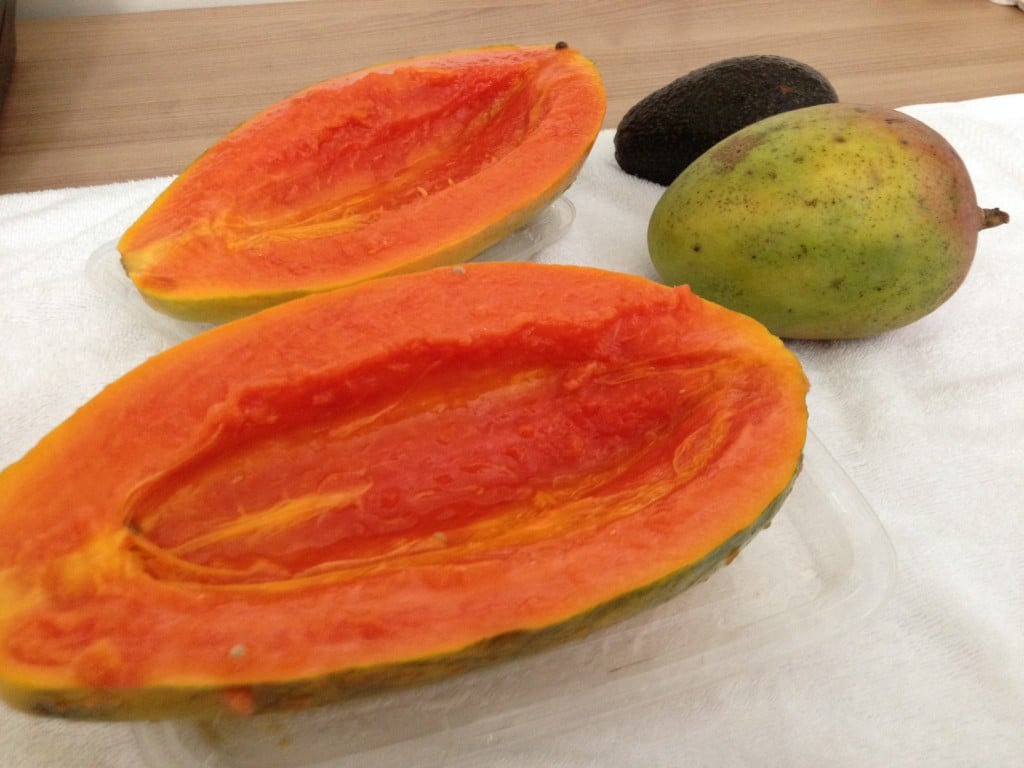 Gary – what did you eat?


Hi Caryn—
How’s Costa Rica? I miss you and at the same time I’m happy you will soon be where you love to be— in the jungle! Ironic because New York City is also considered a jungle…but I digress. 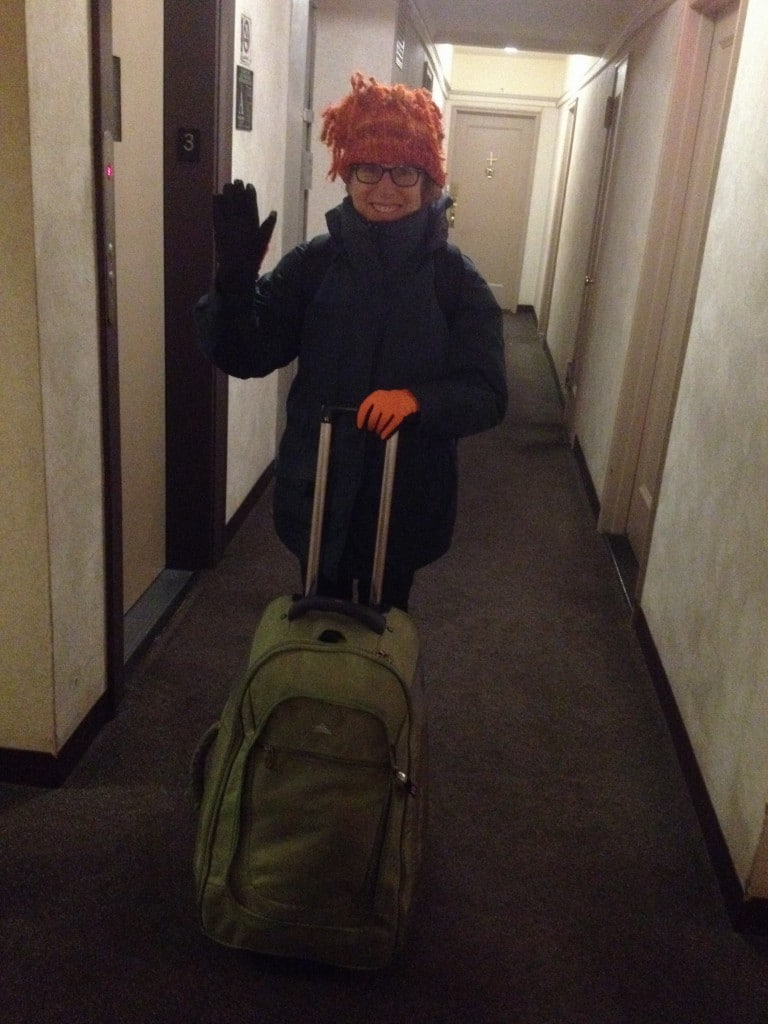 After you left for the Newark airport, by way of the subway to Port Authority where you picked up a bus that took you to New Jersey, I drank some tea and marveled at your courage and your kindness. Then I ate another piece of the “Marbelous Cornbread” and went to work.

When I returned to Queens from a rehearsal in Manhattan, I tested a new REAL recipe for mung bean soup. I started the soup the way we start most of the soups we make here at the REAL Test Kitchen— with carrots, celery, onions, and about five quarts of water. And then I added 2 cups of dried mung beans, half a head of cabbage, 1 jar of tomato paste and a little salt and pepper. And brought it to a boil and simmered it for about an hour. 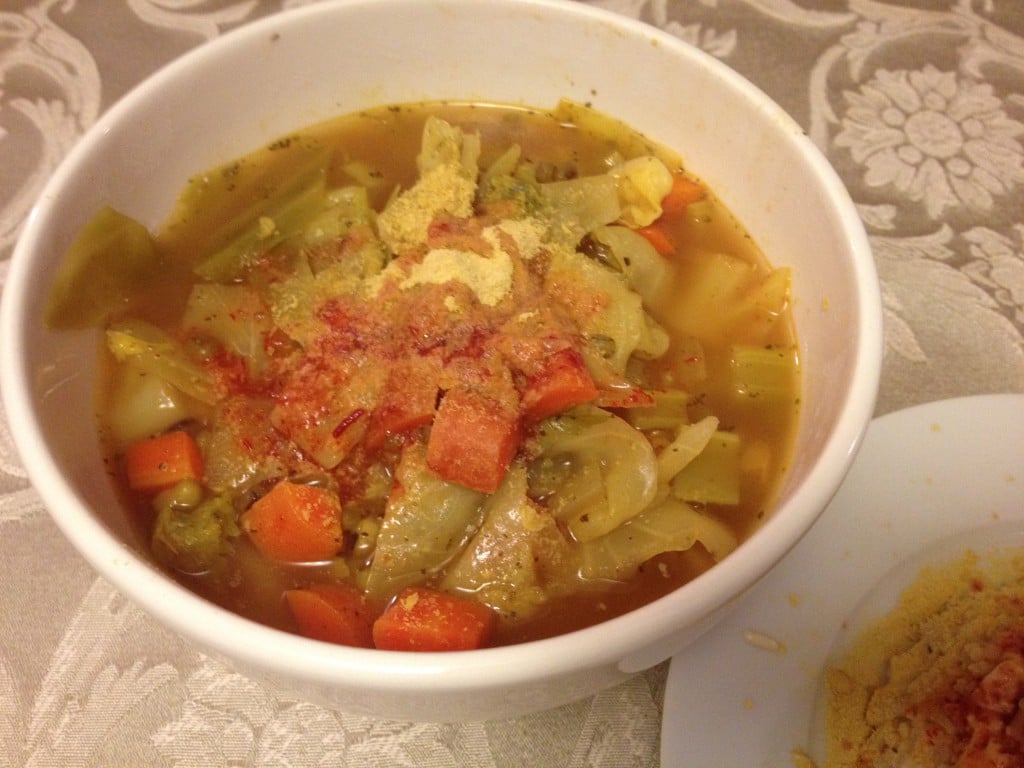 During the last fifteen minutes of cooking I added a quick pesto I made with 1 Tablespoon of Olive Oil, 2 Tablespoons of nutritional yeast, 3 Tablespoons of dried basil, 2 fresh garlic cloves, and about a tablespoon of red pepper flakes (some like it hot!). I put it all in a mortal and pestle and I pulverized it with lots of elbow grease until it made a thick paste, and then I added it to the soup and continued simmering it for another 15 minutes. The pesto gives the soup some heft without the fat. A perfect soup for those who want to eat a lot but don’t want to gain weight. I actually think you lose weight when you eat this soup but again…I digress. 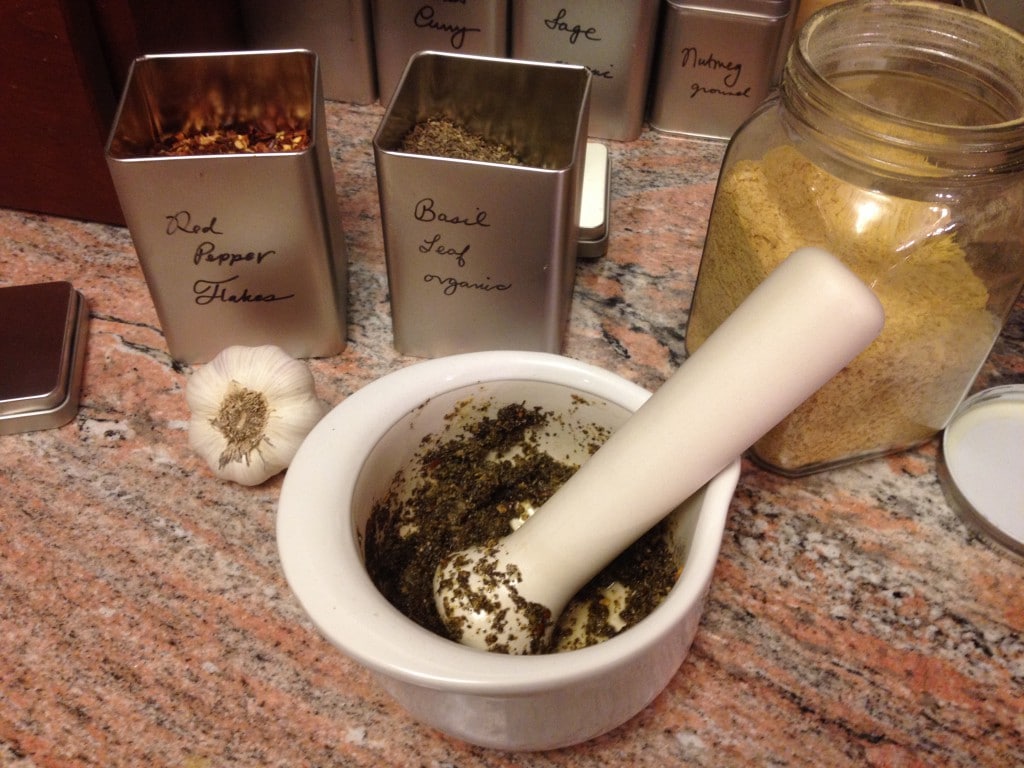 I also made some brown rice and smothered a mound of it with tahini dressing, hot sauce and “dust”. It kind of looks like a lab experiment on the plate but it tastes cheesy and decadent. So good! 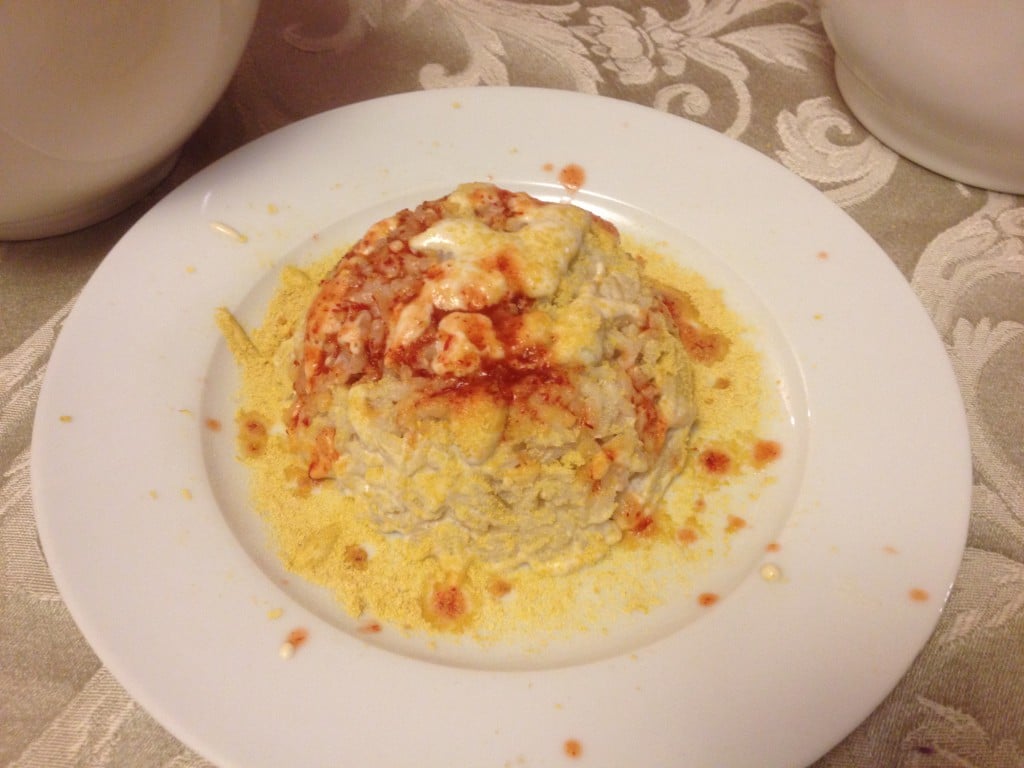