Breakfast: Two years ago when I last visited Costa Rica I grabbed some of Gary Null’s green powder before leaving for my flight. I knew that it would be hard to get the quantity of leafy greens I like to consume on a daily basis. I should have thought about it in advance and ordered a product with just greens. The one that I got was a convenient last minute thought, and was available at the studio where I record my radio show. The kind I purchased is very sweet and I should’ve bought a product that was just greens. I never finished it and here I was leaving again for Costa Rica and thinking about the lack of greens. I knew I wasn’t going to be able to do my daily green juice in the jungle so I brought the remainder of the 2-year-old green powder along and mixed a scoop this morning in water. Then I went out to hunt for food. I knew there was a grocery store not far from the hotel. I wanted to get enough food for 5 days since I’ll be heading to my friend’s farm on Sunday. I ate another whole papaya when I returned to the hotel. I can get into mono meals when I am here. One big juicy papaya is a great meal but that and the sweet juice powder drink I just had for breakfast I’m really craving my greens!

Dinner:I shopped and shopped and was getting very hungry. I checked online for vegan restaurants that I might try and I found one near the hotel – Vurger. Apparently that’s short for Vegan Burger, I walked about 20 minutes and found it, closed. I should have checked the hours. They open at 5pm on Saturdays. 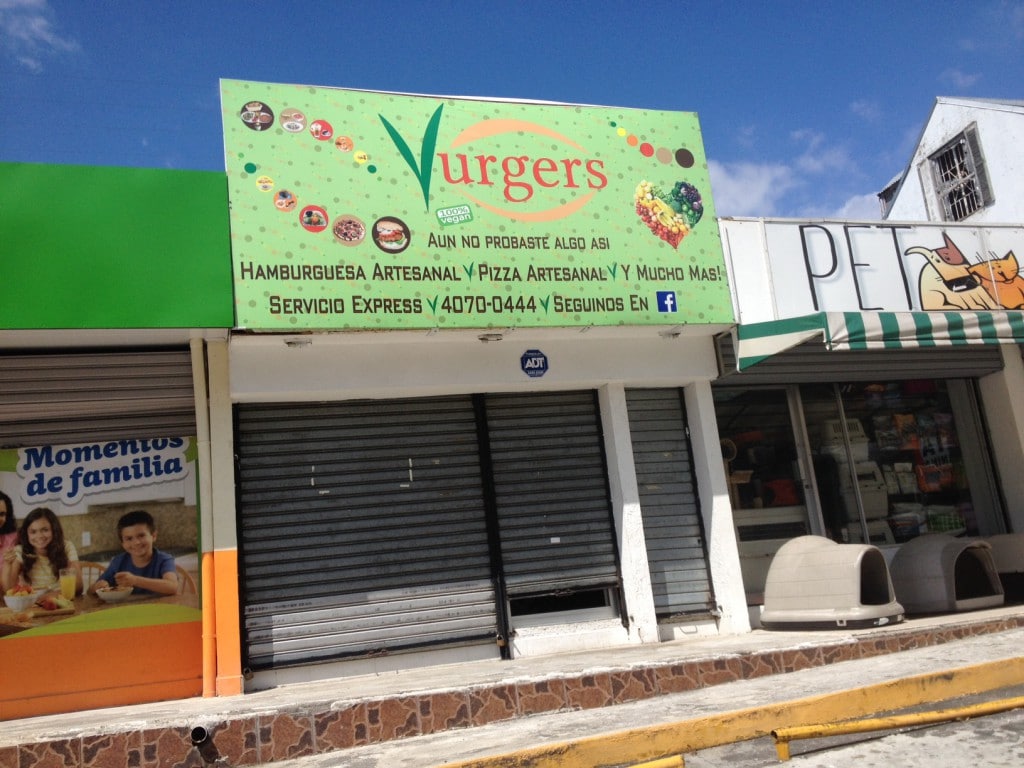 I got back to the hotel and went into the restaurant. The server spoke English and was very attentive to my food requests. There wasn’t anything vegan I could order directly from the menu. That said, he brought me two perfect plates. One had a baked potato, roasted red peppers, and steamed carrots, plus some kind of cooked leaf I cook not identify! Endive perhaps? 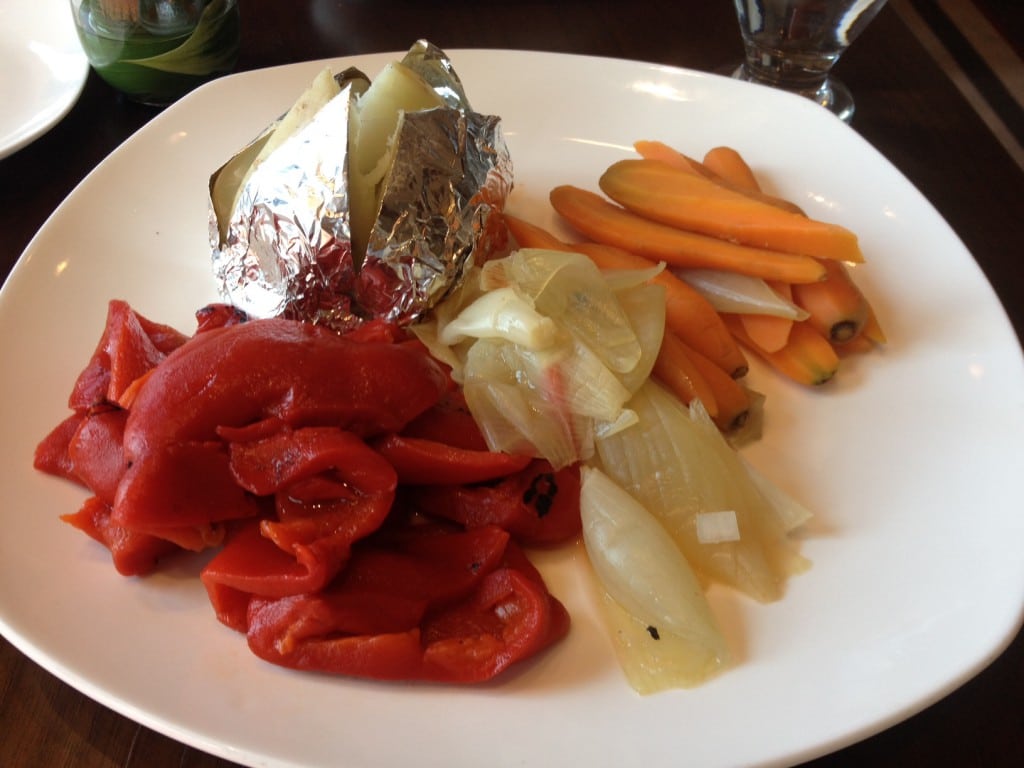 Then he brought me a nice bowl of broccoli. GREEN! It was all very good. I was actually glad not to have gone to Vurger because their offering of burgers and pizza did not sound like what I was up for. 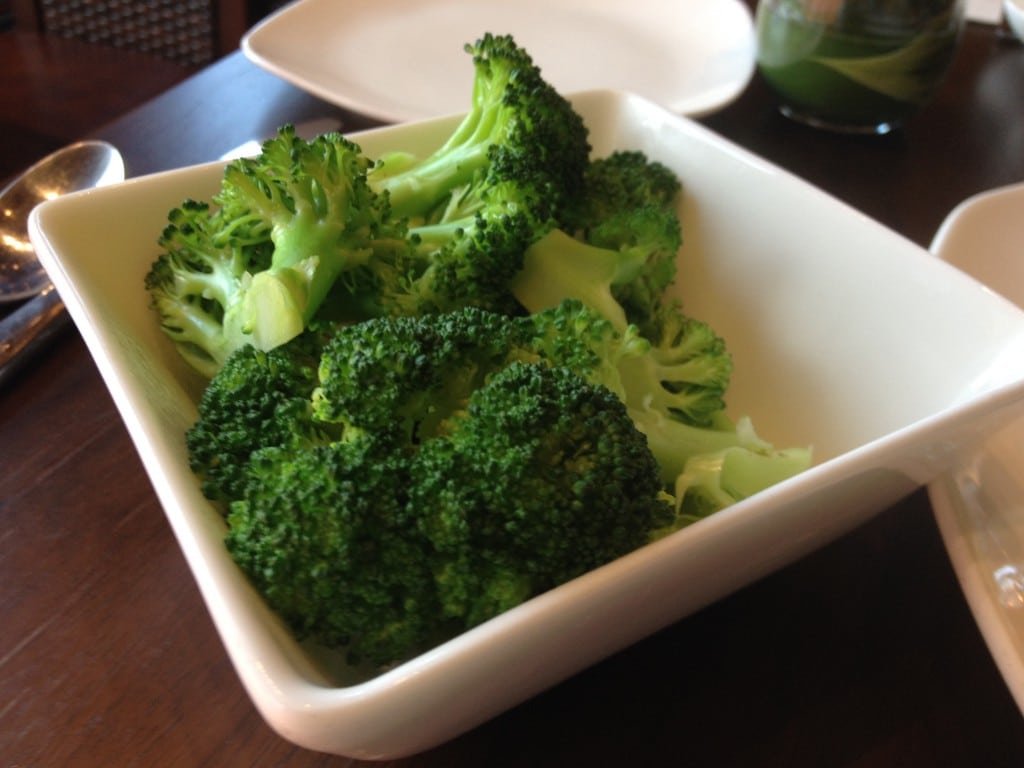 How about you, Gary? What’s been cooking at home?

For breakfast I made toast out of yesterday’s “Marbelous Cornbread” and had an organic banana from Costa Rica! The irony is too sweet for words and so was this banana which was like “buttah”! And I had “weekend tea” (vanilla black) to drink and the New York Times to read. 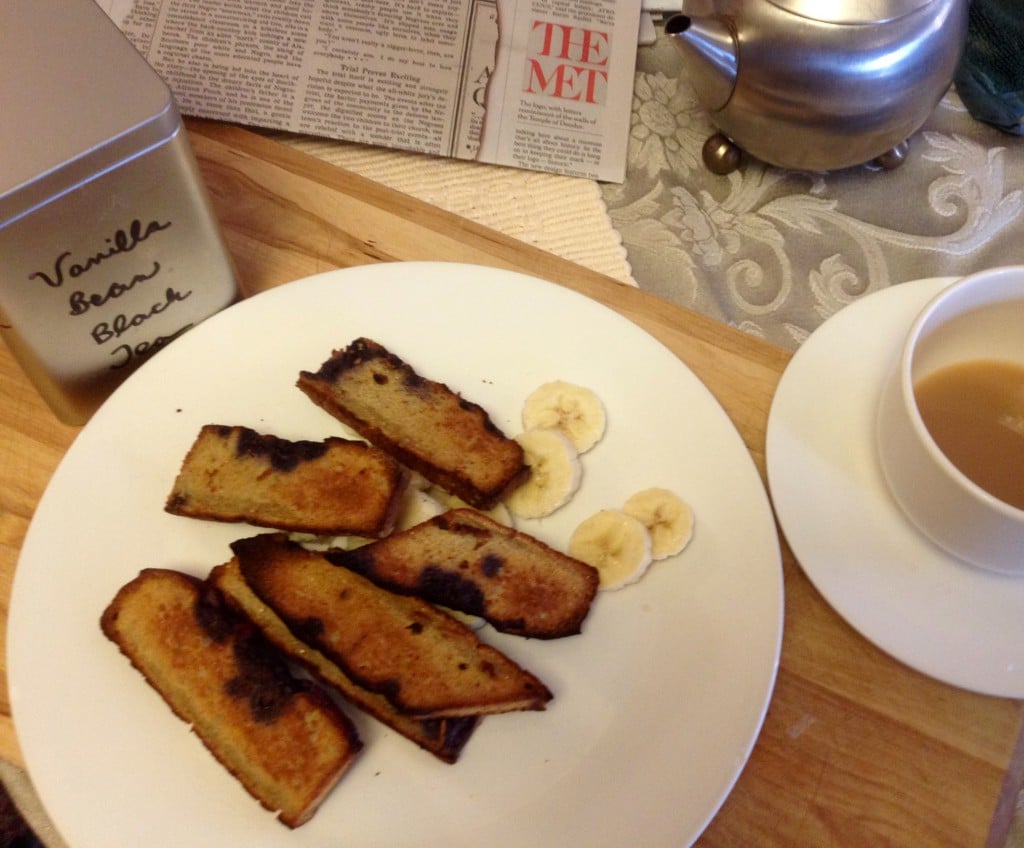 For lunch I must’ve been sensing your craving for greens because I made a giant kale salad with avocado and tahini dressing! As I worked I ate it right out of the bowl. It’s a good thing you weren’t here to share it with me, it was horrible…said no one ever! Seriously, though, I don’t want to rub it in— it was fabulous! And speaking of rubbing it in, I massaged the kale just like you told me to do! :•) 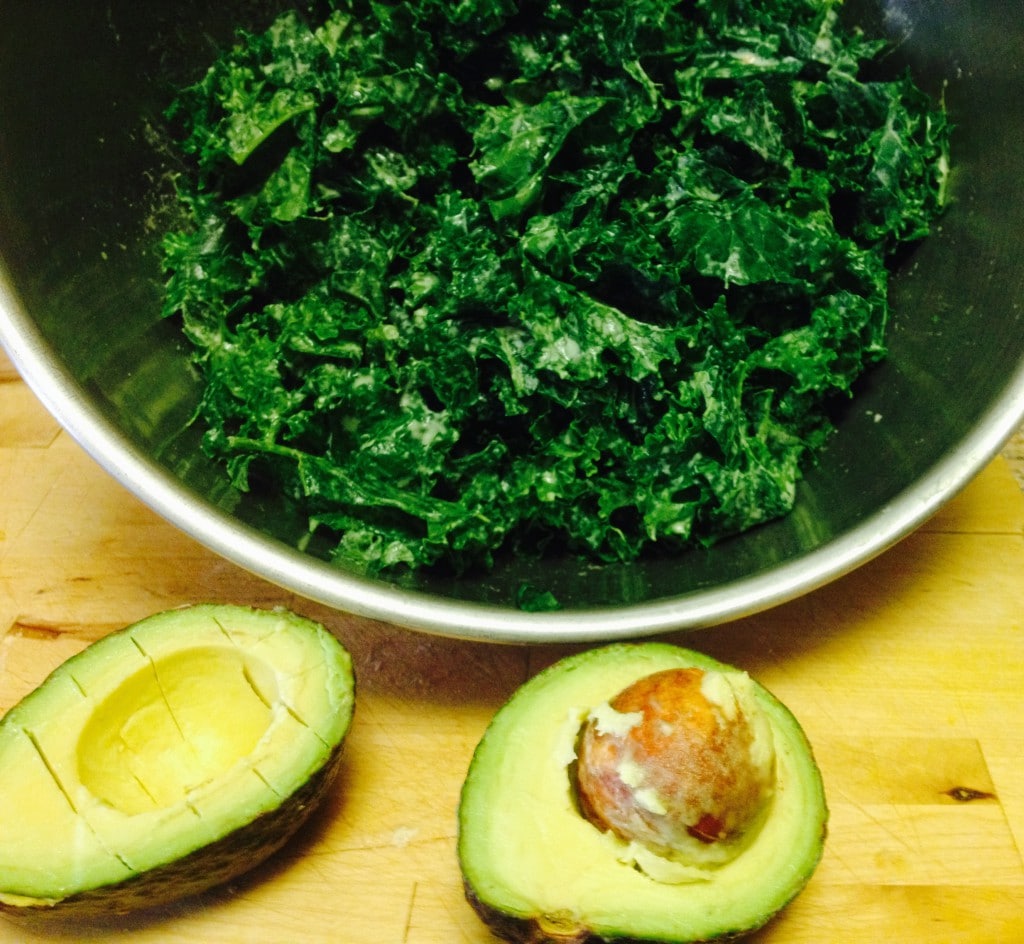 Then I opened the REAL test kitchen and tackled more vegan recipes for our cookbook made from old family favorites that aren’t vegan but need to be. For example, with the leftover brown rice from yesterday I set out to continue my attempt at veganizing an ancient De Mattei family recipe that I’m calling “My Italian Grandmother’s Torte Genovese”. Essentially it’s a baked rice quiche and/or frittata that has a few Italian kitchen staples. So instead of egg I made a batter of chickpea flour and instead of parmigiano reggiano I used nutritional yeast. Other ingredients are onions, saffron, basil, red pepper, black pepper, olive oil and a little salt. I’m happy to report I’m getting very close to nailing this and can’t wait to share the vegan version with the world! Stay tuned. 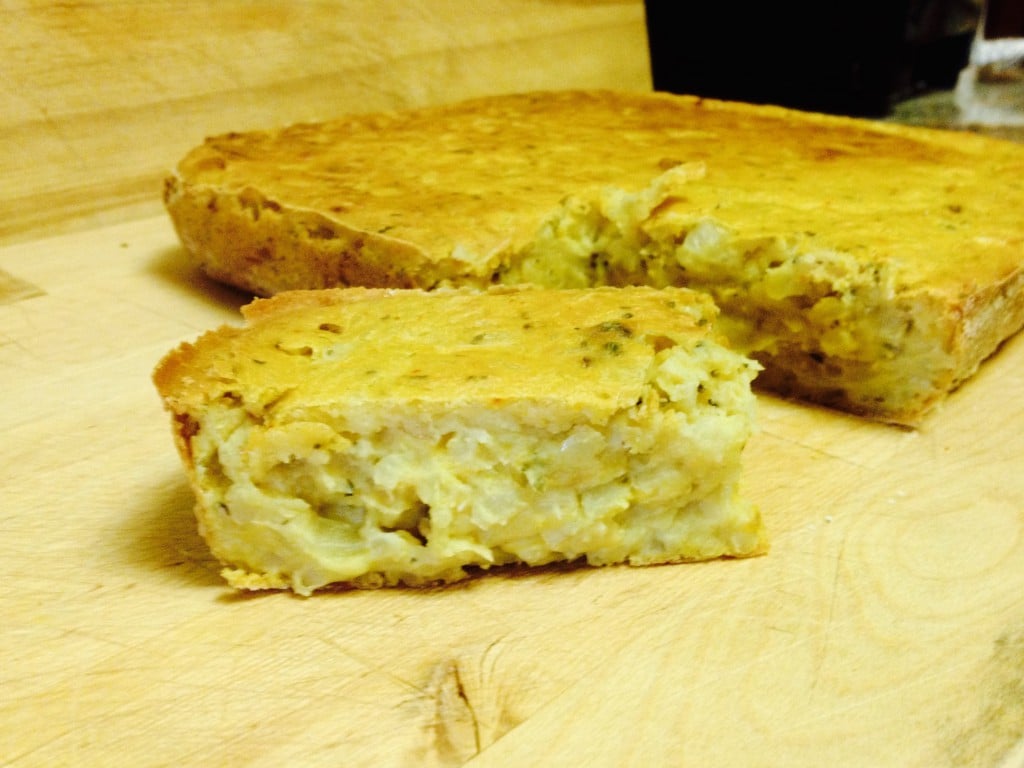 Somewhere in the middle of writing recipes for our Easter and Passover menus I had more tea and more of the “Marbelous Cornbread”. 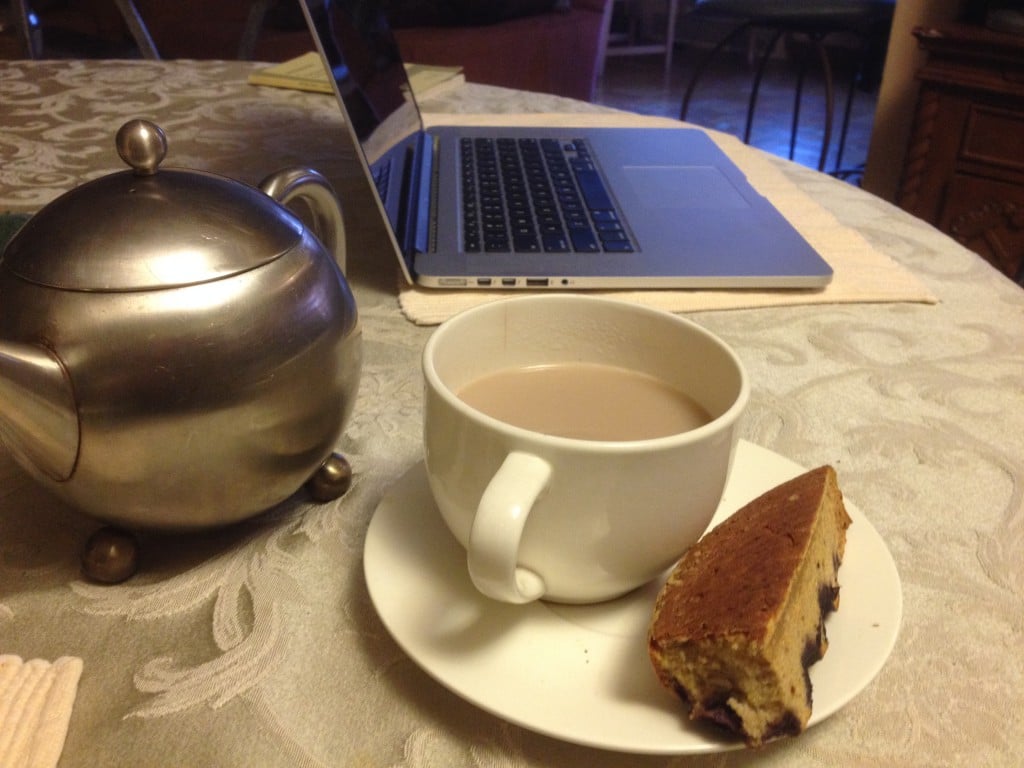 Okay, see you back here tomorrow for Day 376 of What Vegans Eat Special Travel Edition! Safe travels to the jungle tomorrow! Say hi to the snakes! xoxo

P.S. I may have also had a piece or two of dark chocolate…for the snakes.