The big event today was to visit my property. I bought 80 acres of undeveloped property here in Costa Rica about eleven years ago with another woman from New York. We each took 20 acres for ourselves with the intent of selling the other 40 acres. Since neither of us gets down here as often as we’d like, and because the property is remote, we have not sold our 40 acres. Let me know if you are interested.

It is the hot summer season now and apparently drier than normal. I left the house at 5:30am. It is about an hour and a half walk. I left as soon as it was light and wanted to be back before 10 am when it would be really hot. I drank a lot of water, brought a bottle with me and was off.

Leaving Beth’s farm I walked downhill about 25 minutes where the road ends. It was lovely, cool, peaceful and easy. The air was so fragrant. This is part of what I love about Costa Rica, the underdeveloped part, where walking is pure joy. I especially love the tart fragrance of the guava fruit.

At the bottom of the road I turned left and walked about ten minutes. Then I turned left by the San Salvador welcome sign, near the convenience store, which is basically a shack but has come in handy a few times with needed essentials. 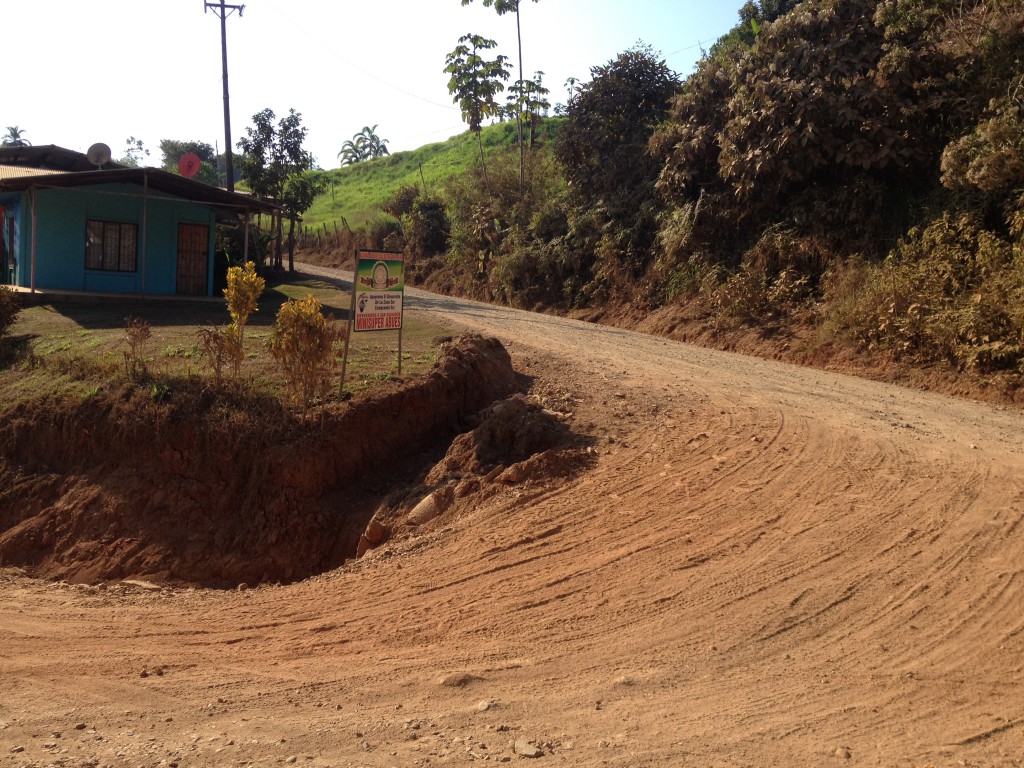 Then it’s about another 50 or 60 minutes to the property, uphill and downhill. I found the walk easier than ever. Maybe it was because of my old new sneakers. I had bought them 2 years ago and never wore them. Now I needed them and they were great. They had a nice bounce in them that worked well against the rocky dirt road.

My Zen-like stride was broken when people passed by on noisy, smelly motorcycles, quads and trucks. I know they have helped a lot of people and made their hard lives easier. I even appreciate a ride here when it is so hot and hard to walk. I just wish these vehicles, all vehicles in fact were quiet and clean. In the cities where everything is noisy and dirty I don’t mind it. But here where natural beauty still exists it’s harder to accept.

The road turns right a little and then I know I am near the property. 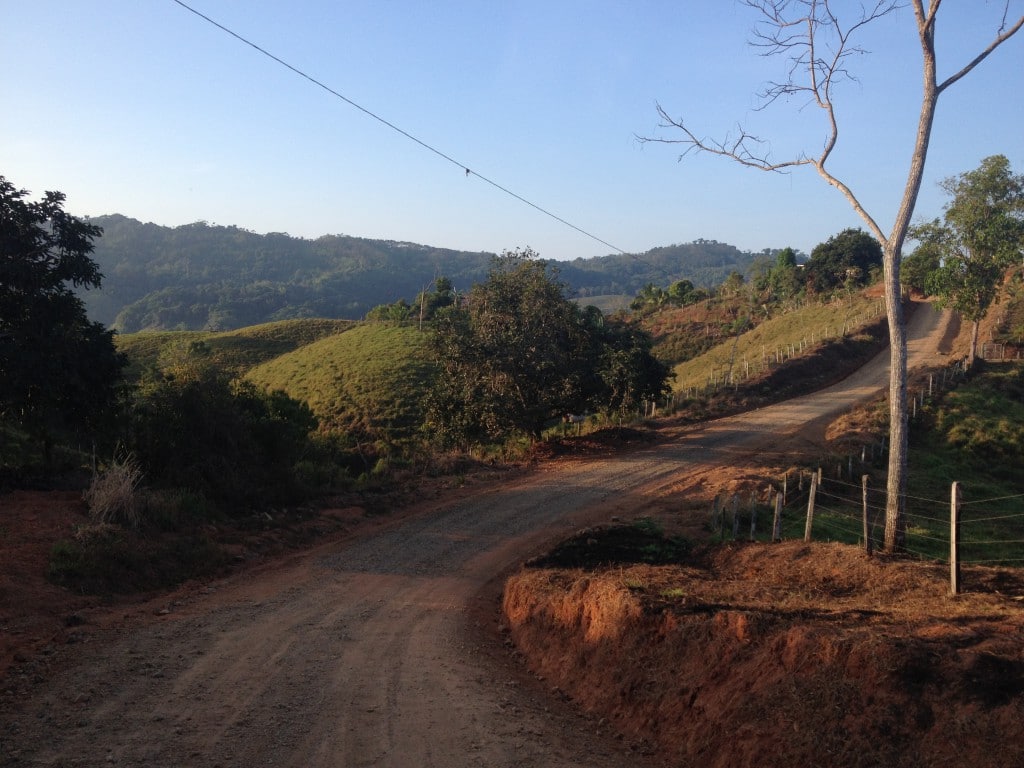 There are some new neighbors that I said hello to. 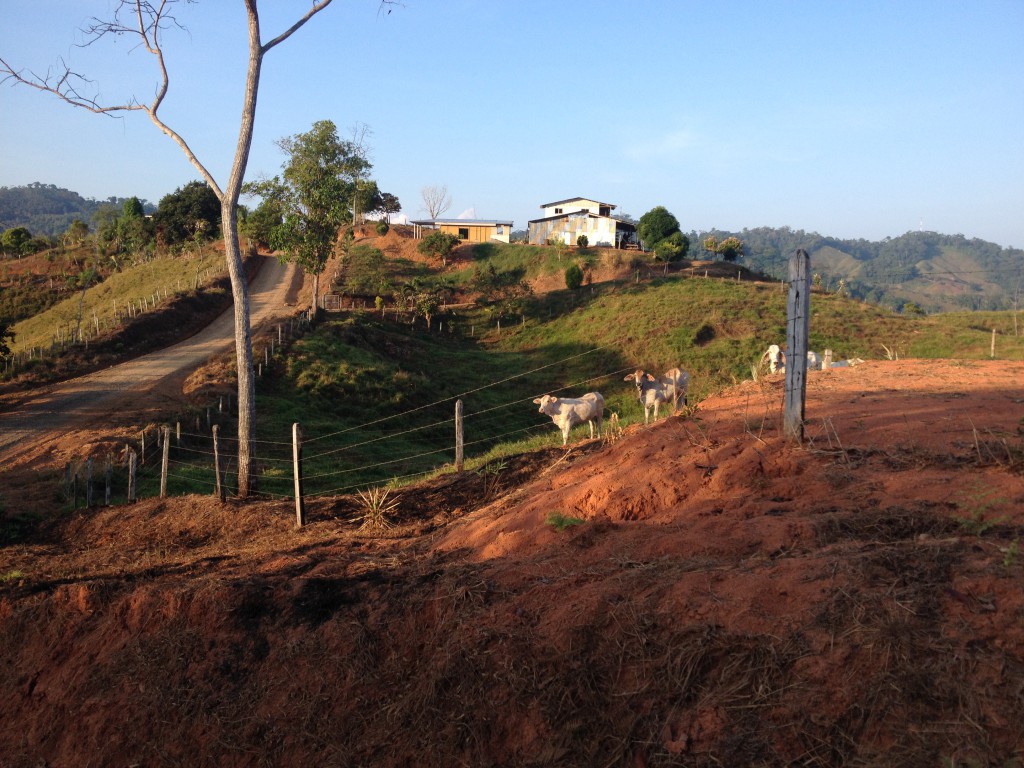 And I arrived. My piece is past the field towards the hills. It’s a bit overgrown now and I could not see it all. The energy is good and I was glad to be there. 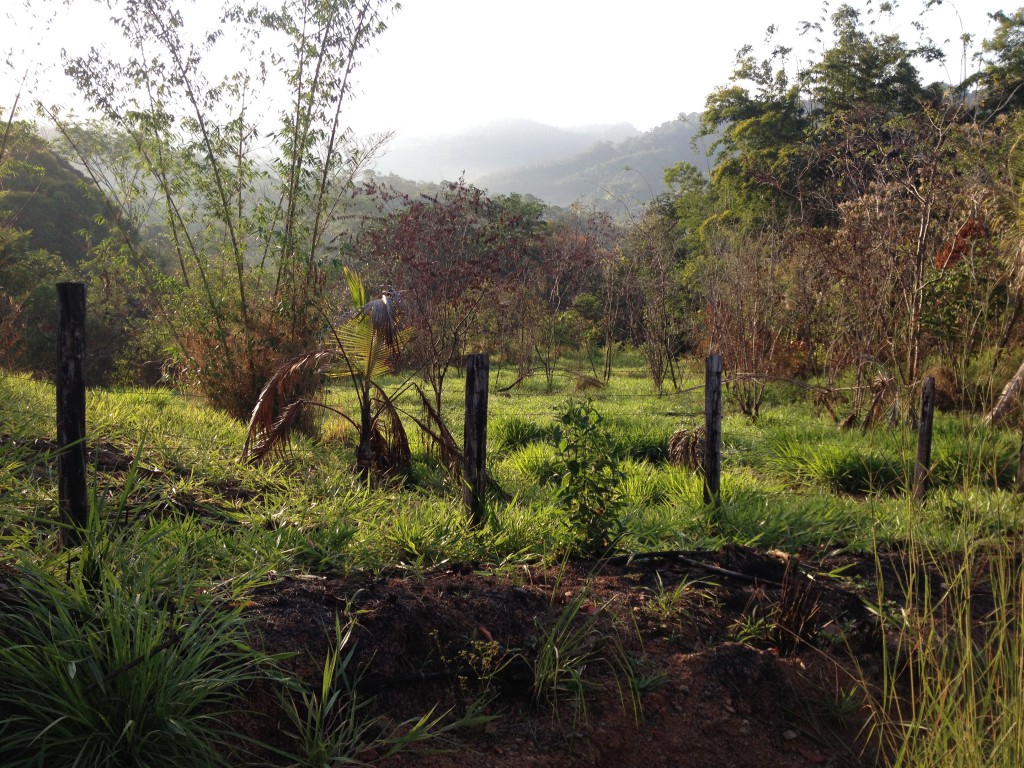 Then it was time to return. It was hotter and harder on the way back. When I reach Beth’s road, I was tired. The way was all up hill. I went slowly, drinking water, stopping in the shade. About 1/3 of the way, Bea, a neighbor, drove by and she gave me a lift to Beth’s farm. Yay! I made it back, hot, sweaty and so hungry! 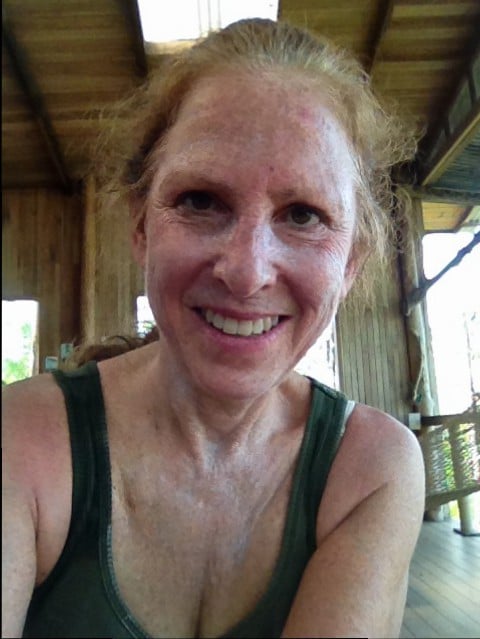 Breakfast: I could not eat fast enough. I had a half of a papaya. Then I went to clean up from the dusty road. 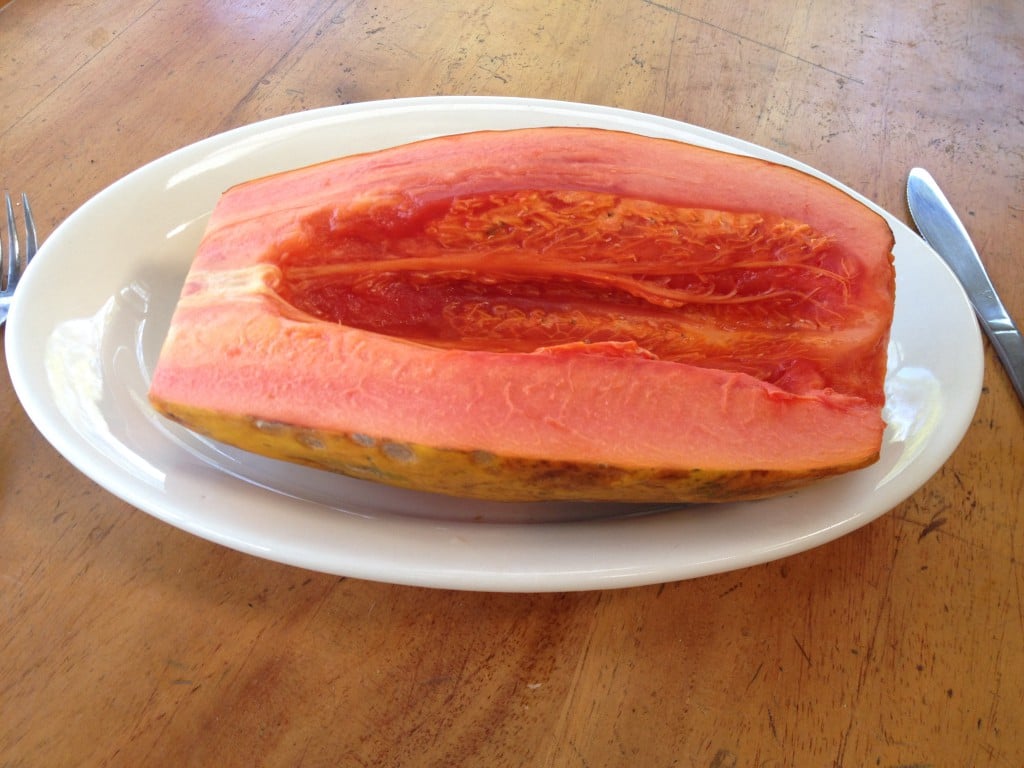 Lunch: Lunch was just a little while after breakfast! I didn’t realize I had another container of cooked split peas in the refrigerator. I blended them up into a creamy soup and warmed it. There was a lot and I vacuumed it down. 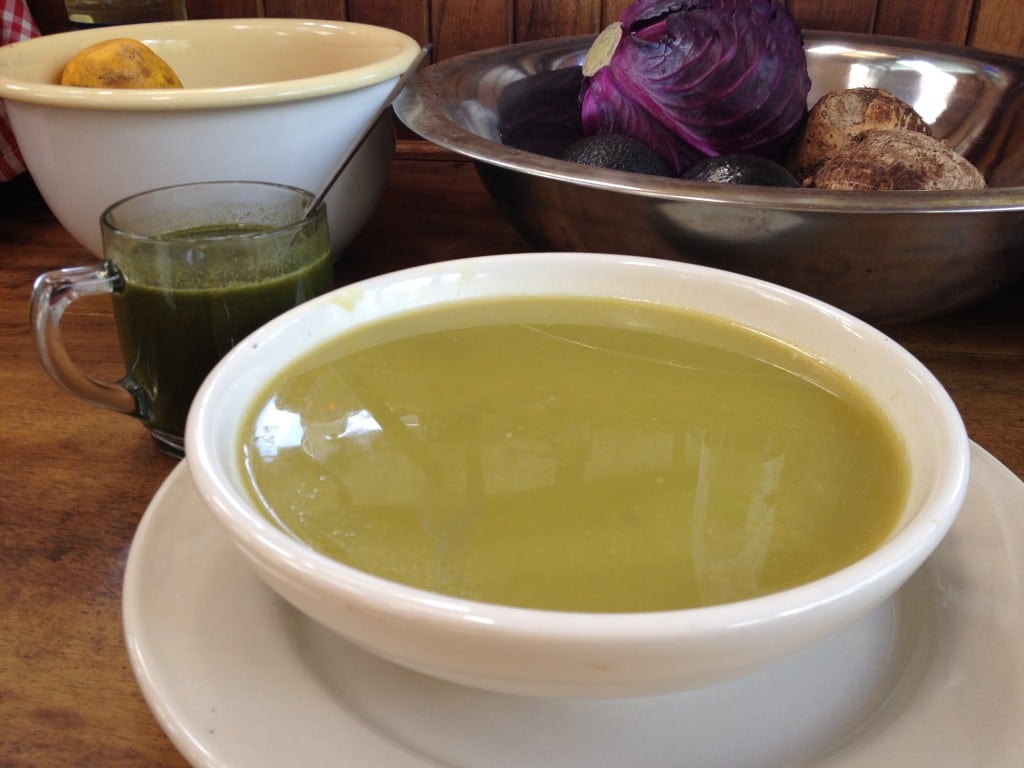 I still felt hungry. I had bought some Malanga in San Jose and thought I would cook some. They are a starchy root (also called taro) and a good replacement for white potatoes, especially for those who can’t each night shade vegetables. I peeled off the tough exterior. 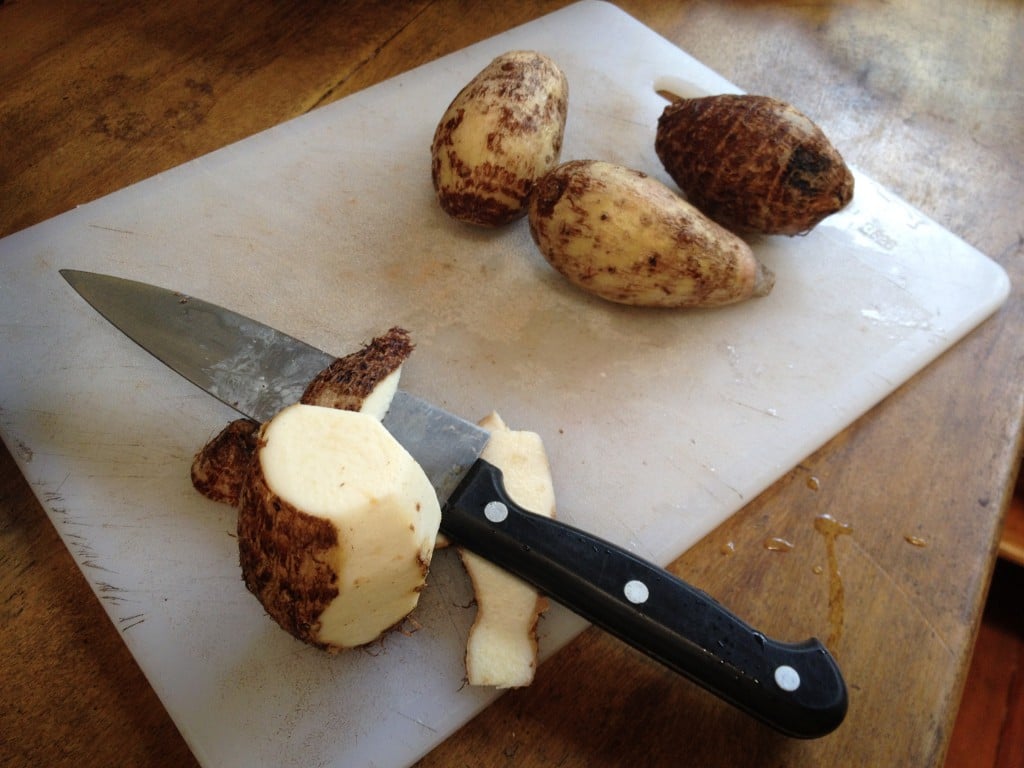 I cut them in half and let them cook in water. When they were soft, I drained the water and mashed them. They were similar to potatoes but a little slimier, like tapioca. I cut up a plantain and cooked it in olive oil. I don’t use oil for cooking much but not being at home, with the pots I like to use, I thought it would work out better if I oiled the pan I was using. The plantain caramelized nicely and I added it to the mashed malanga. Believe it or not, when I was done preparing the dish I was no longer hungry! I set it aside for later.

Dinner: I was not in the mood for the Mashed Malanga with Caramelized Plantains for dinner but thought it would be great for breakfast. Instead, I ate some of the leftover Kale with Ginger I had made a few days before. I had a big pile and still could only eat maybe half. I thought I was so hungry. What happened? 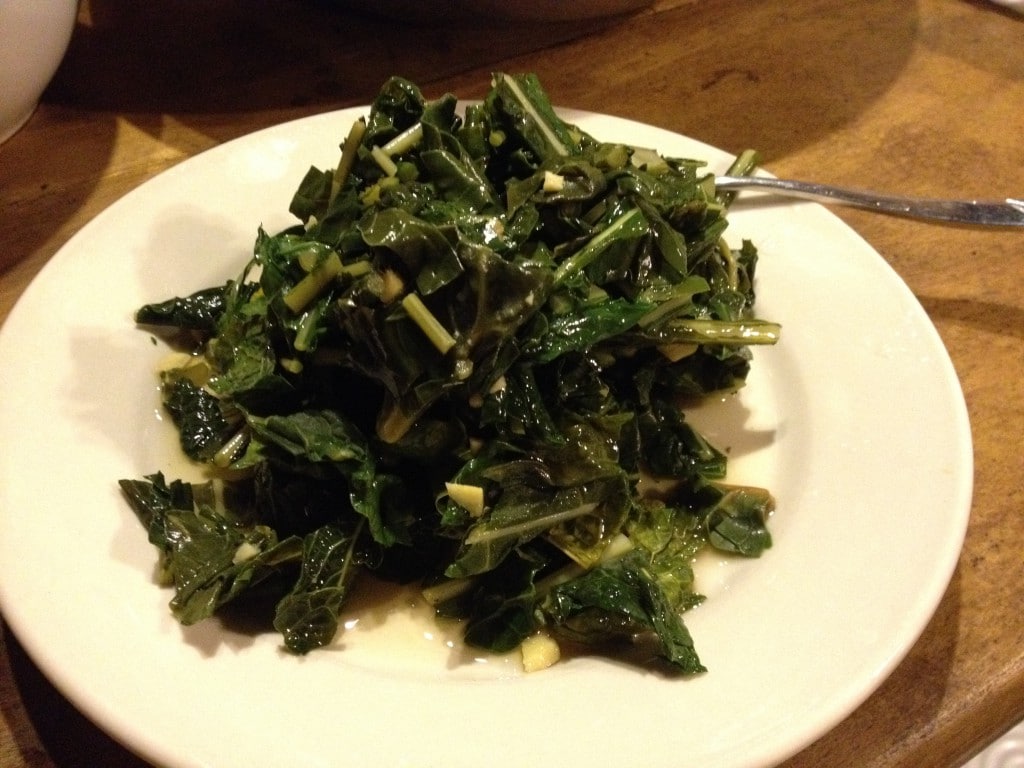 You know what Gary? I think I keep making too much food, food for two! Miss you. Now it’s your turn, tell me your food stories for the day.

The photos of your walk in the beautiful country of Costa Rica are gorgeous! And my photos will hopefully give an interesting contrast.  However, I think the food will look pretty similar even though some of the ingredients may be wildly different.

Breakfast— Cooked oatmeal with apples and raisins. Instead of cinnamon I added two star anise while I was cooking the oats. Then I went to work on memorizing a new scene for class: Arthur Miller’s A View From the Bridge. 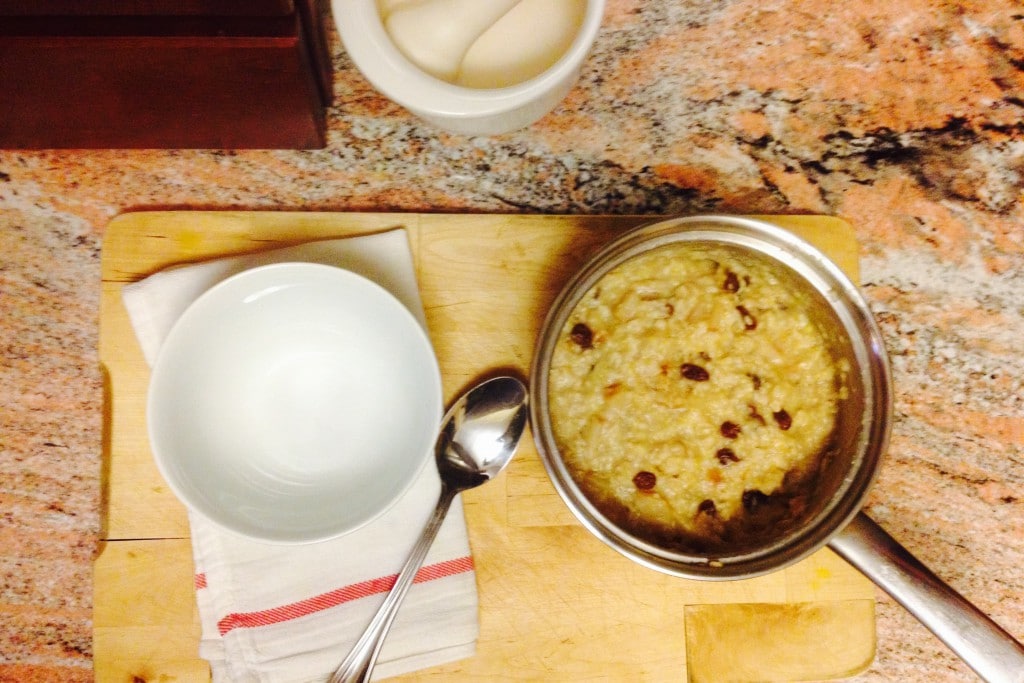 It was difficult to work through breakfast because with every bite I was reminded how much I dislike star anise with oatmeal. It wasn’t that I couldn’t eat it— it was just annoying.  I love it in our Phaux Pho, however, and other Asian Fusion dishes we do at REAL. But oatmeal…not so much. I decided to channel my annoyance for Star Anise into the work— I’m developing a character who is, to put it mildly, annoyed…so I used the annoyance sensorily. As with cooking, one must try and use everything in acting. 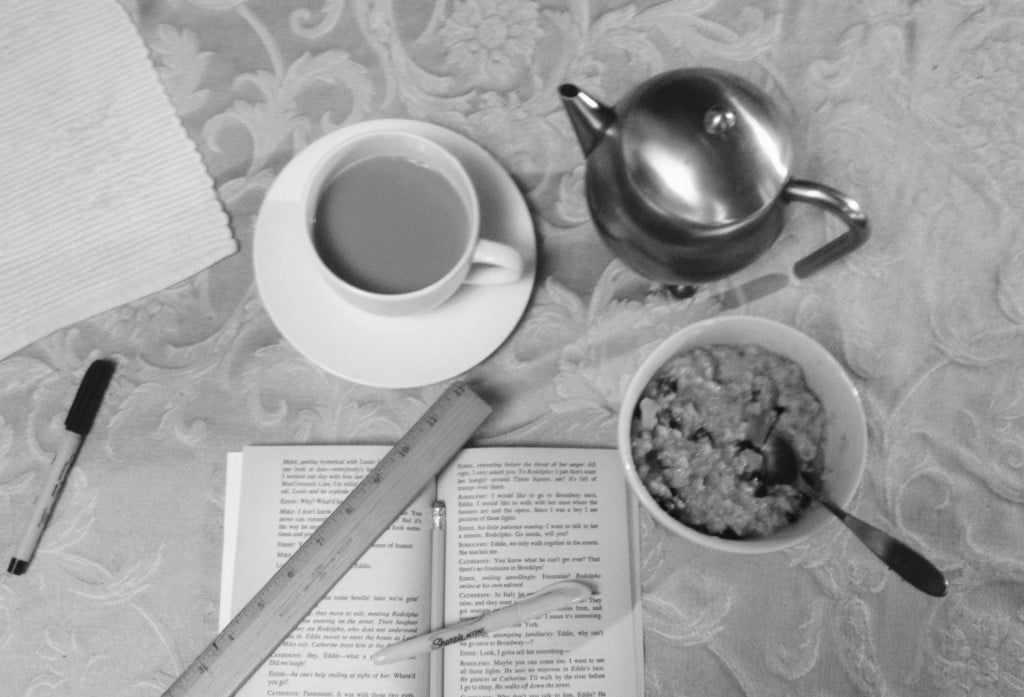 I lost track of the time and realized I had a ticket waiting for me at The Lunt Fontanne Theatre on 46th Street in Manhattan for the Broadway show, Finding Neverland. If you’ve never been to this historic theater you must plan a visit. 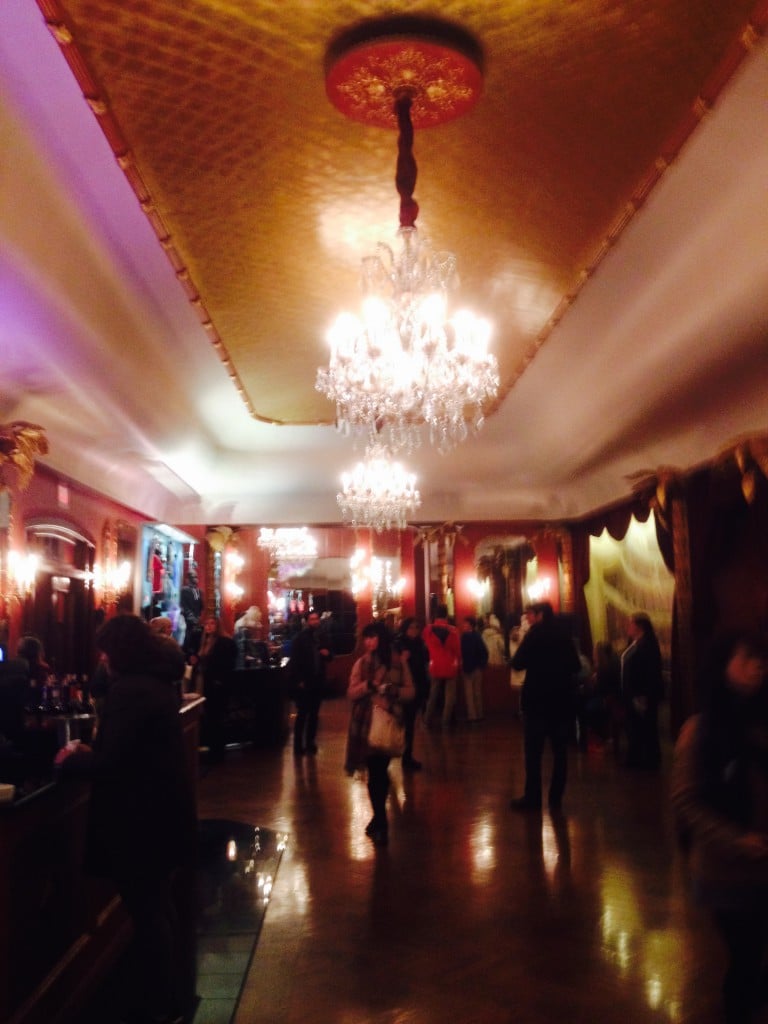 As I mentioned yesterday, my dear friend Don Lawrence works at Finding Neverland— he is the Master Electrician and has a huge job running the lights for this show. The lighting booth is located in the back of the last balcony so I literally have a friend in high places on Broadway. During the course of this heavily lit show Don must execute hundreds and hundreds of lighting cues as called by the stage manager who runs the show from way down on the stage. It’s mind boggling how technically sophisticated Broadway has become since the days of The Lunt’s. It’s also mind boggling how unsophisticated the presentation at the theater lobby bar has gotten— When I got to the theatre early I thought I’d visit the beautiful lounge located upstairs which was open to us early birds— a very nice touch considering it was pouring rain outside. I thought, Okay, I’ll splurge, I’ll have a beer. So, I purchased an $11 IPA. Anticipating a sparkling clean glass to go with the magnificent hand polished crystal chandeliers. 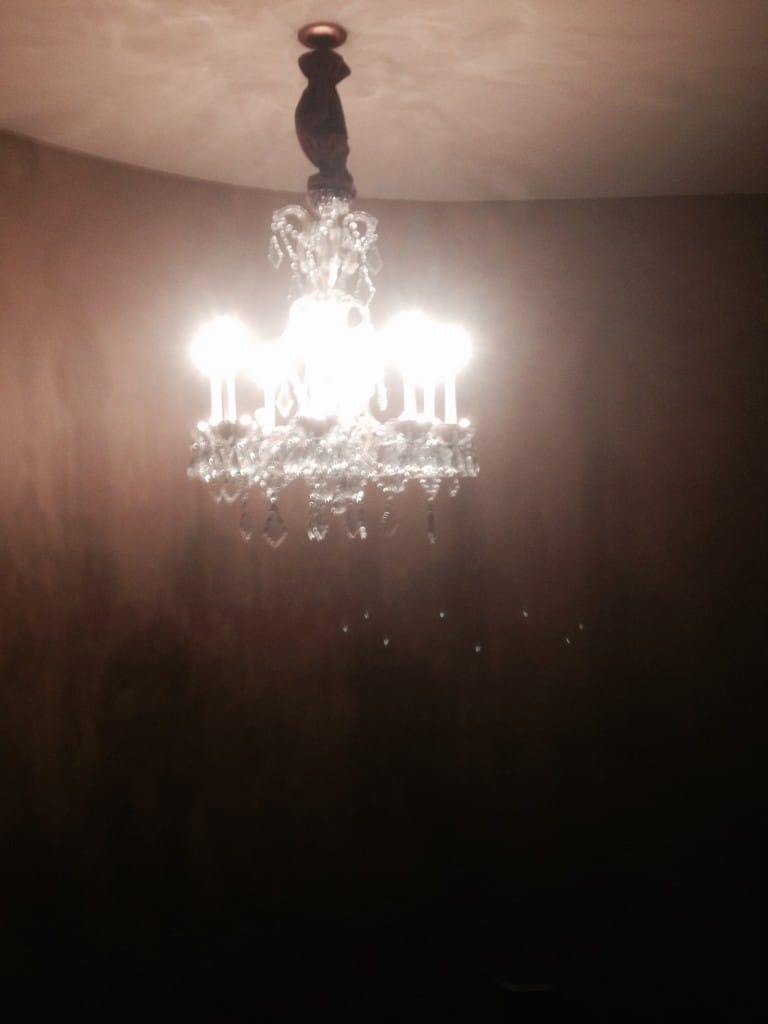 The expensive beer was instead served to me in a Finding Neverland plastic Cup. Holding a “tippy cup” in this magnificent lounge shattered all of my illusions and took away from the experience of being in this glamorous theater. It was a classic example of the sublime and the ridiculous. 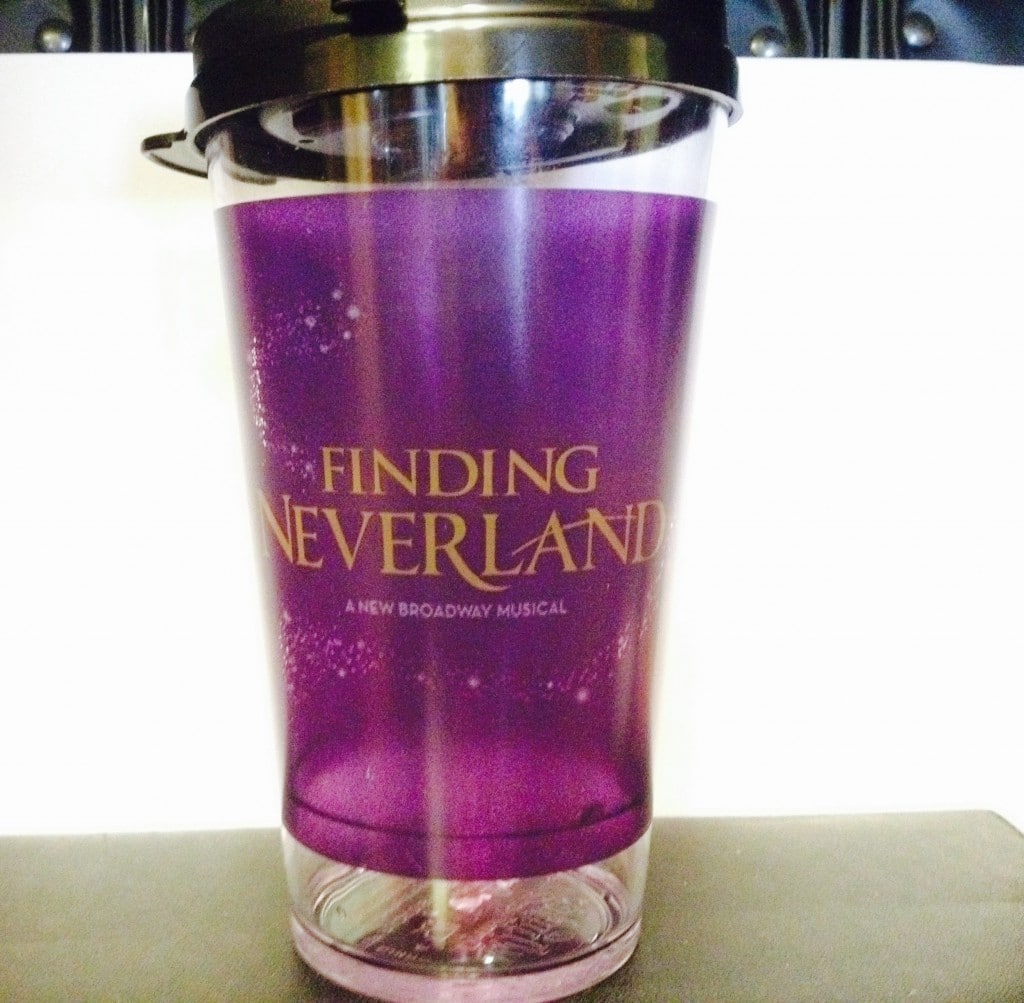 I felt like a character in a Woody Allen movie who longed to be back in time during the theater’s heyday. Perhaps attending the play Hay Fever written by Nole Coward, pictured here on the right with Alfred Lunt and Lynn Fontanne. 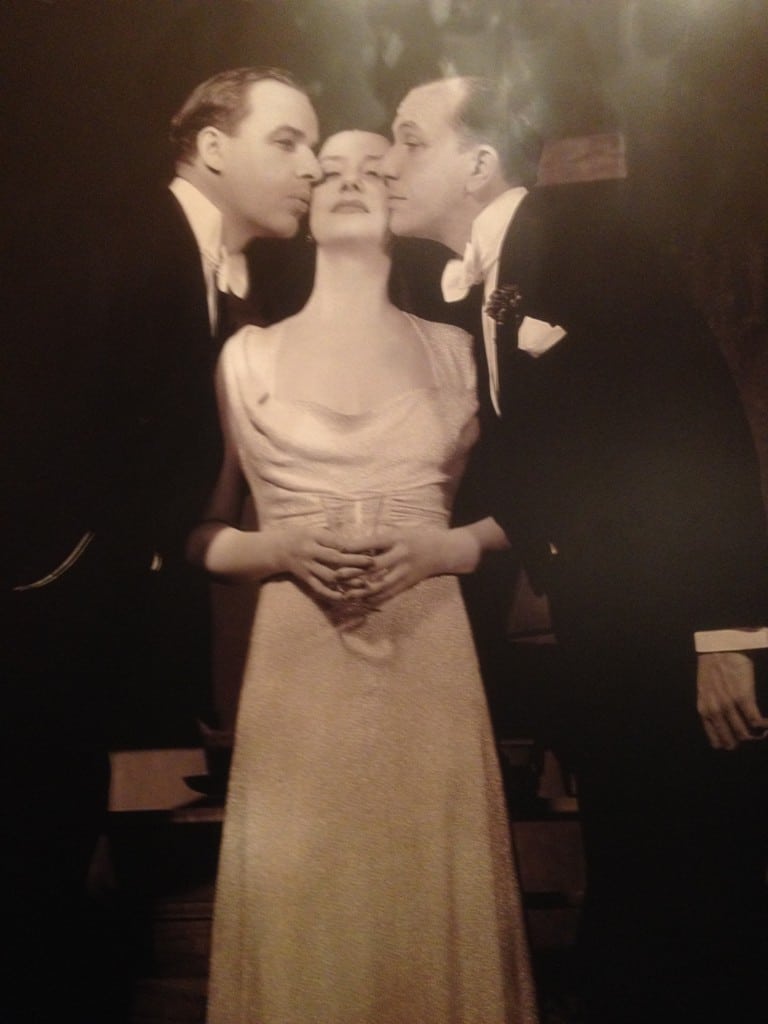 The Wednesday Matinee of Finding Neverland was not sold out. And so that means there were comps available for the cast and crew to give away to friends and family. I was one of the fortunate few to get a comp and what a comp! I was placed in the third row center section of the orchestra. I don’t think I’ve ever sat that close in a Broadway theater. It was a fabulous seat!  I could make out every detail of the gorgeous act curtain. 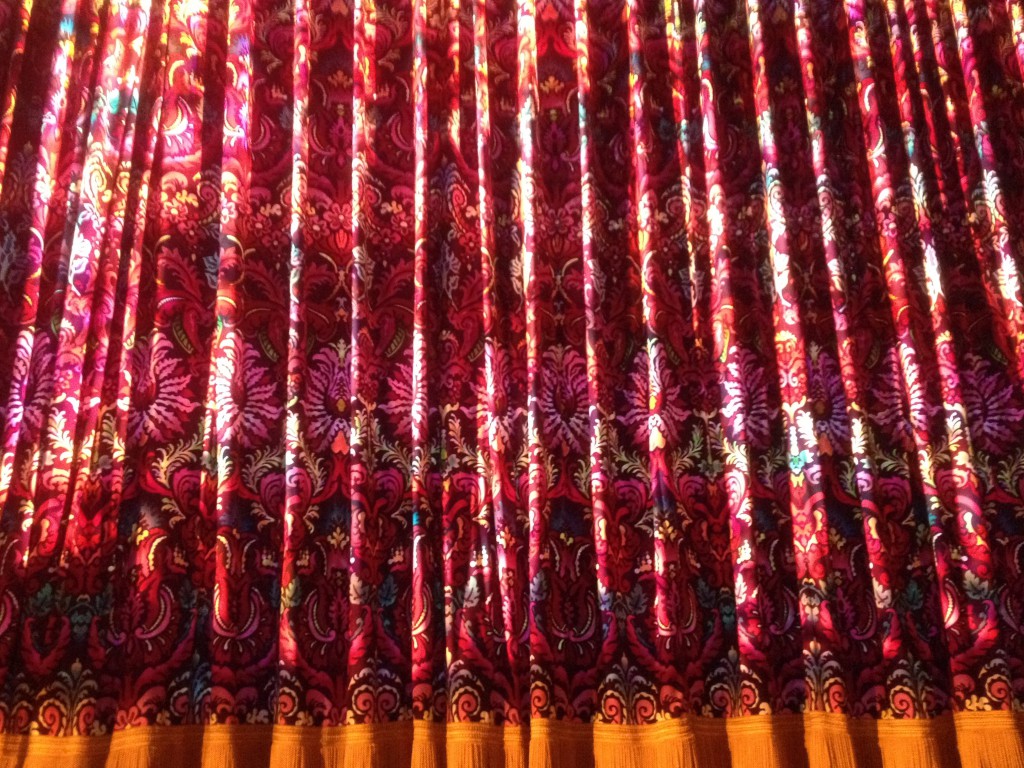 The matinee performance I attended had several understudies performing roles normally played by ‘stars’ like Sandy Duncan and Kelsey Grammer. The understudies were fantastic! And for me the lighting and effects were the real stars of the show! And I felt the most exciting effects were also the simplest. For example, instead of flying Peter, Wendy, Michael and John on “wires”, actors lifted them all high in the air and the lighting designer lit the actors in such a way that it actually gave you the illusion of flight! The use of glitter and “wind” (fans) was also a simple effect yet astonishing when lit. After the show I was very grateful to Don for giving me a backstage tour of the entire operation including a view of the stage from the the catwalk to see how it all was done. (Wait, no stars…Star Anise…a view of the stage from the catwalk…which can also be considered a bridge…A View From The Bridge…okay, I’m using it all.) Needless to say, the backstage tour was amazing! But you won’t get any spoiler alerts from me. Go see the show. Bring the kids! They’ll love it! 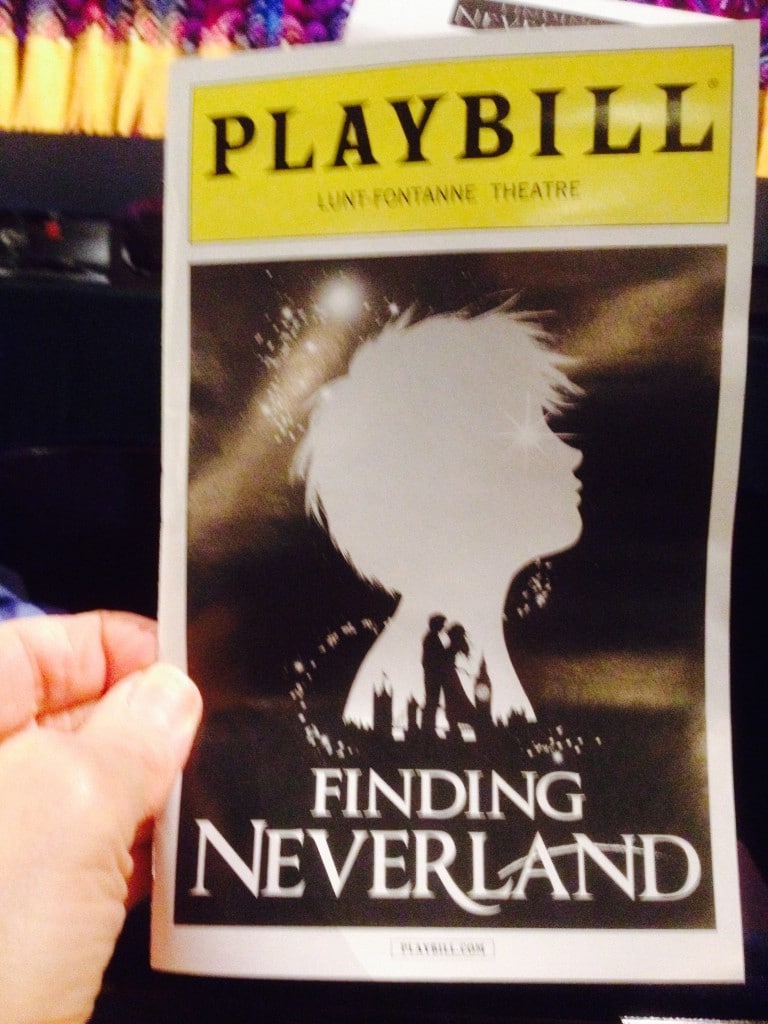 When I got home I was very hungry and very grateful for friends…and leftovers. I made a kale salad with tahini dressing, the baked tofu from yesterday, and my last avocado. 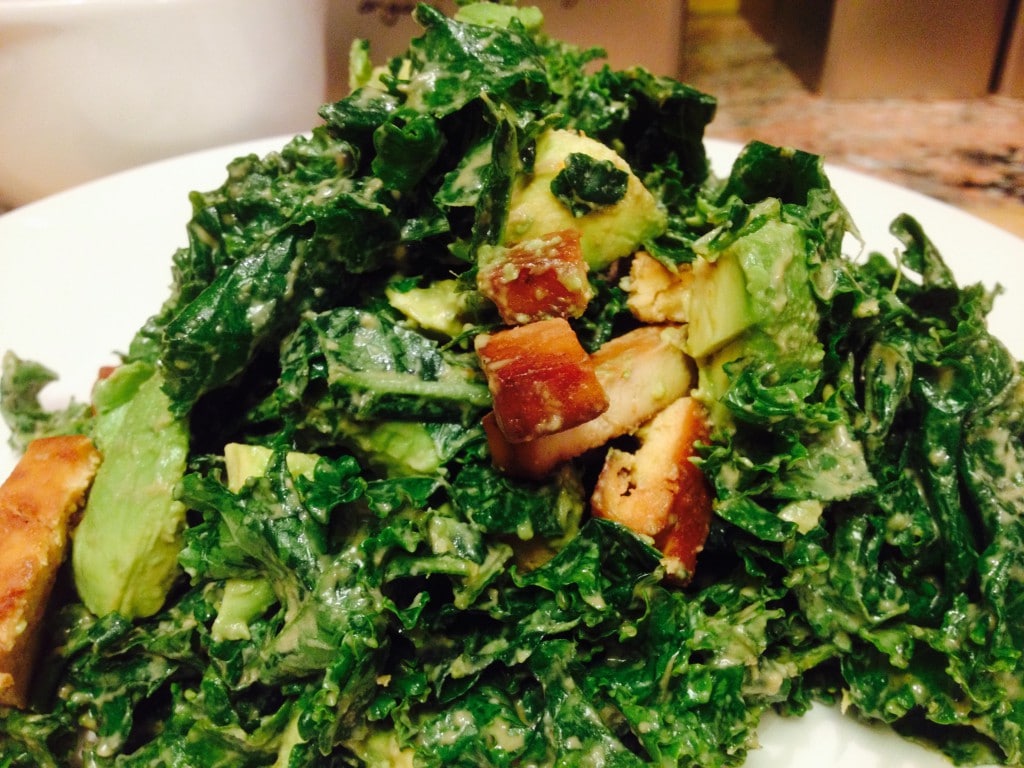 I also heated up the rest of the oven baked potatoes and mixed them with the collard greens— both from yesterday. 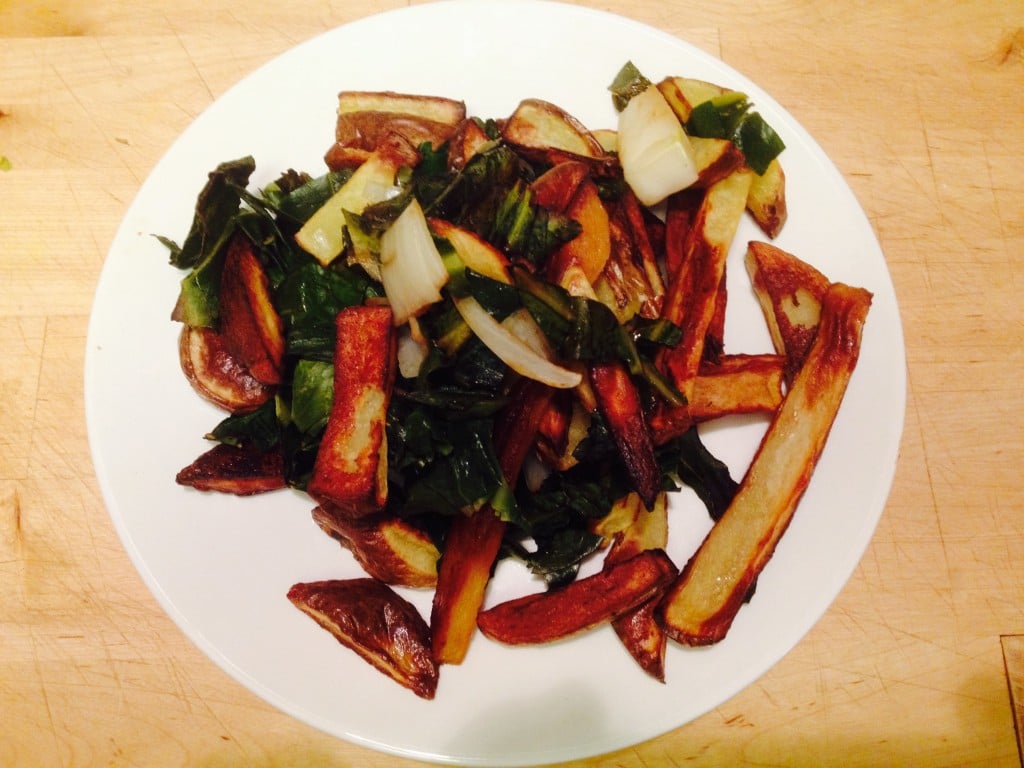 See you soon, Caryn! I love you! And I hope you’re having fun finding Neverland! xoxoxo