Breakfast: I was leaving Beth’s farm today. as usual I did not want to waste any food. I had a purple cabbage left that I chopped and steamed. I knew I would eat it later in the day, or during my plane flight back home on Saturday or both! I cut up the last papaya and enjoyed it quickly. I finished the last of my Gary Null Green Powder and added a secret ingredient – purple cooking water from steaming the cabbage. Whenever you steam vegetables remember don’t waste the cooking water, drink it or put it in soup, it is full of vitamins. 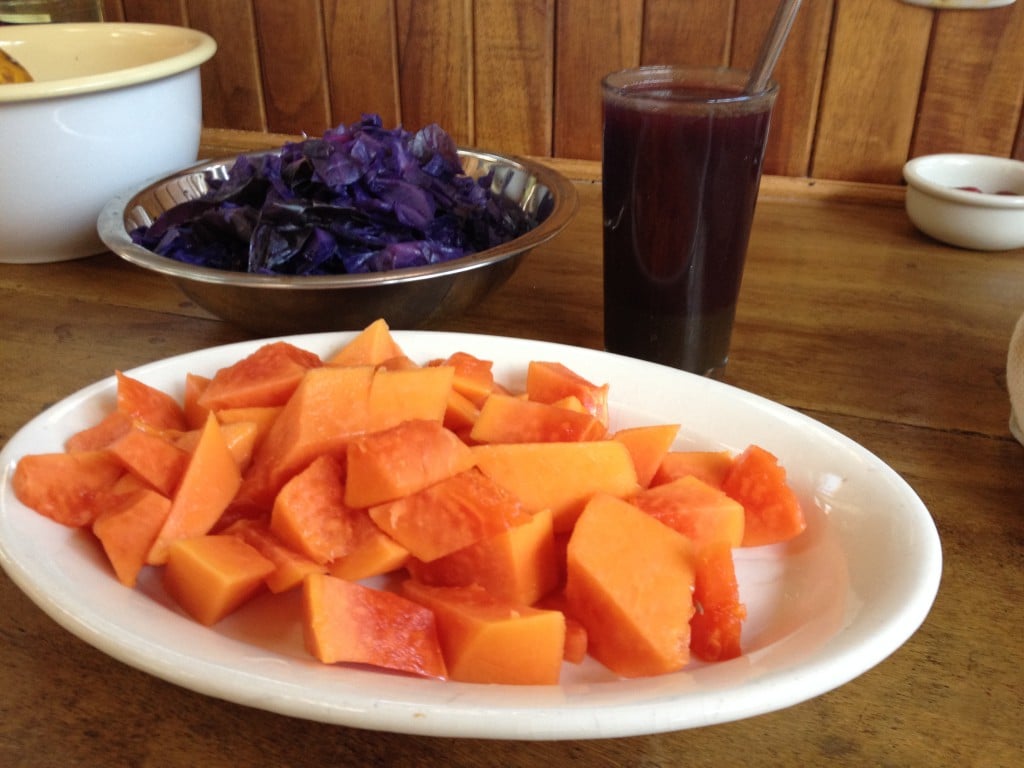 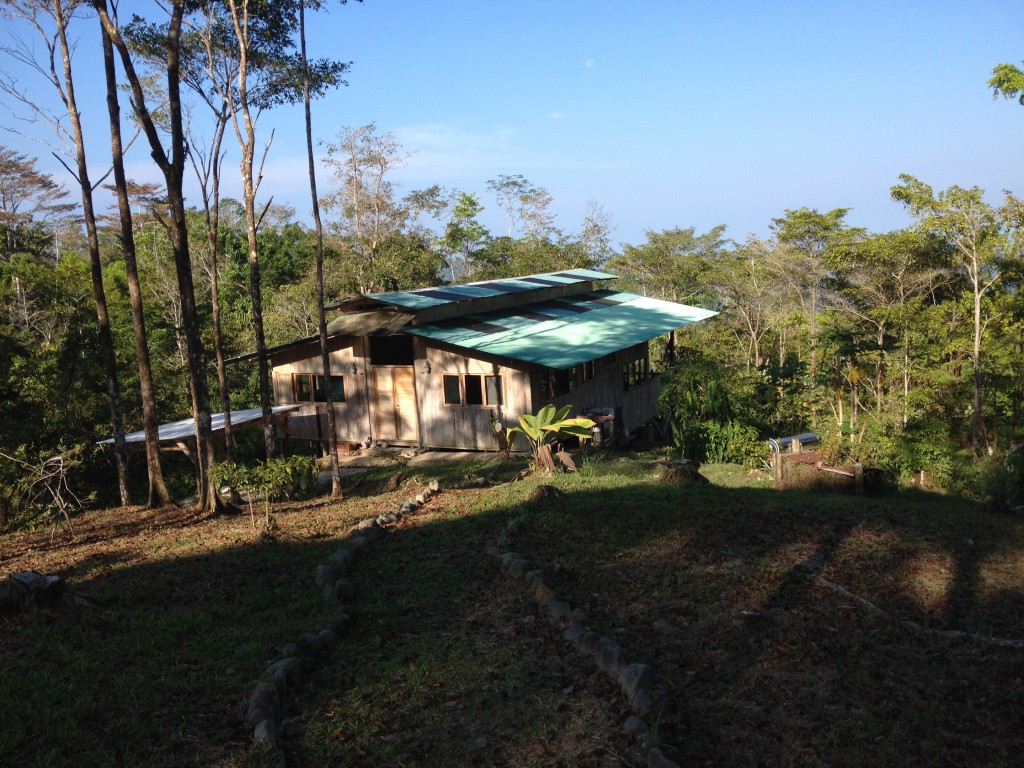 Lunch: After a bumpy cab ride on the dirt road, followed by a smooth ride on the newly paved road I arrived to meet Beth at her city apartment. She had just come back from playing tennis. I had a bunch of tasks to accomplish like addressing some bank problems and getting my property value declared with the national registry and Beth was coming with me to help, since she speaks Spanish and I don’t. It actually was a lot easier than I anticipated. We were meeting Beth’s son Buddy for lunch and everything timed out just right. Now I could truly relax. Everything I needed to get done was done. We went to a restaurant called Mangostan. 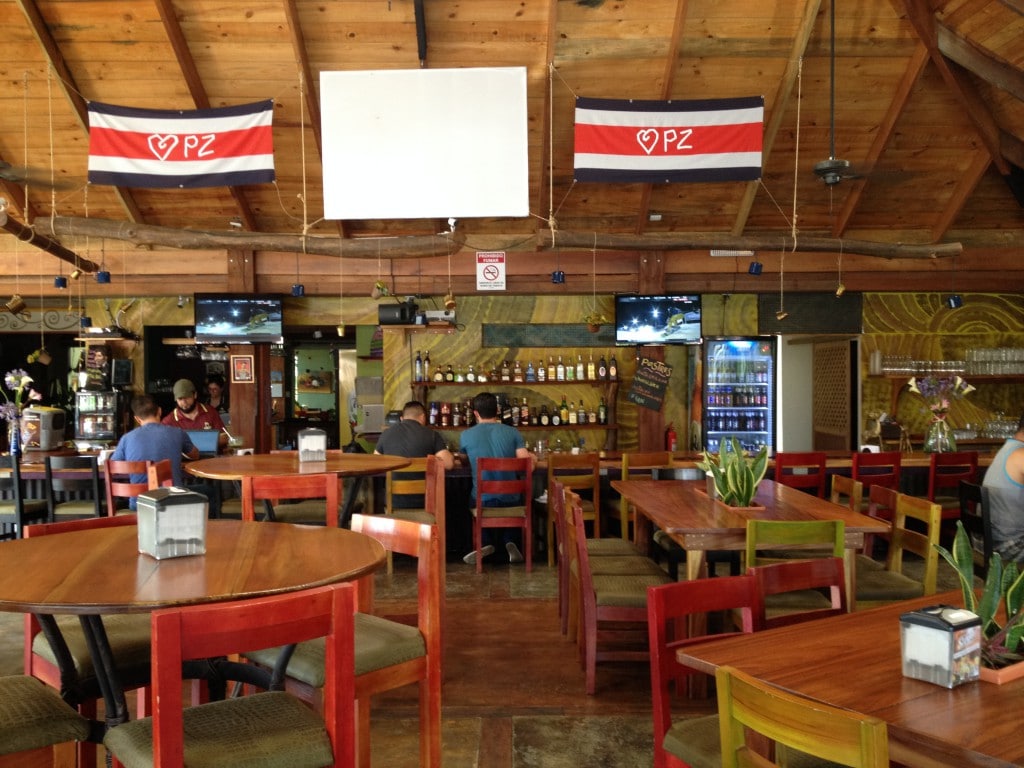 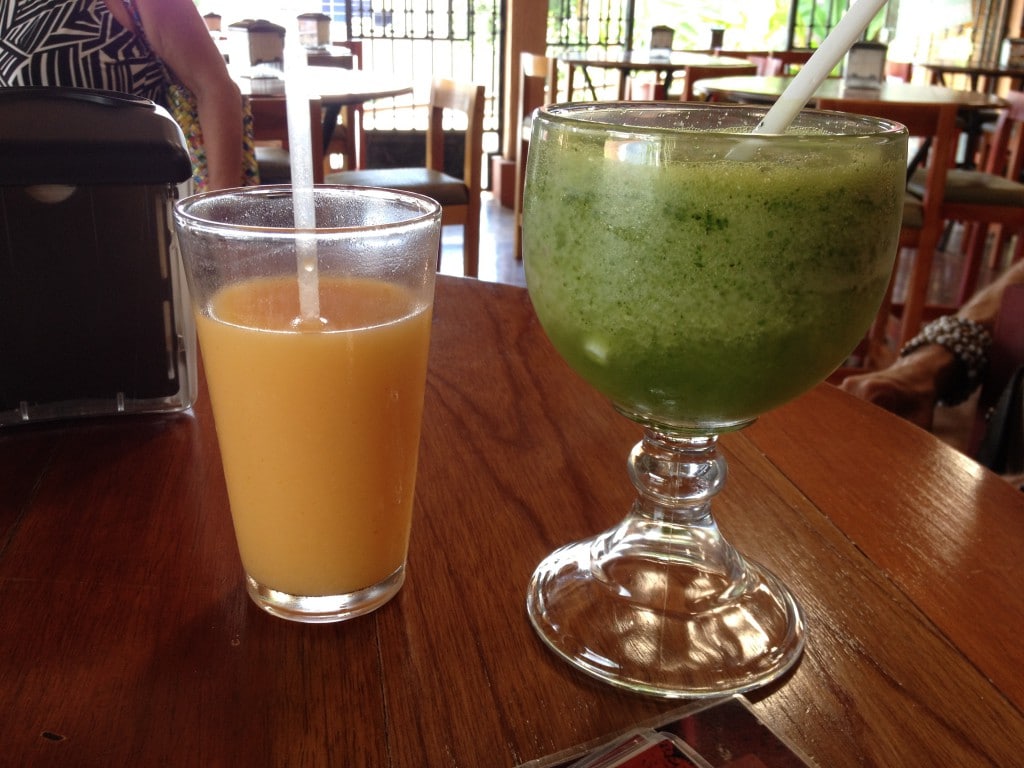 There was nothing vegan on the menu, but it was easy to make a vegan plate. It was delicious, with steamed rice, beans, salad, avocado and fried plantains, which actually were a little too sweet for me so Beth finished mine. 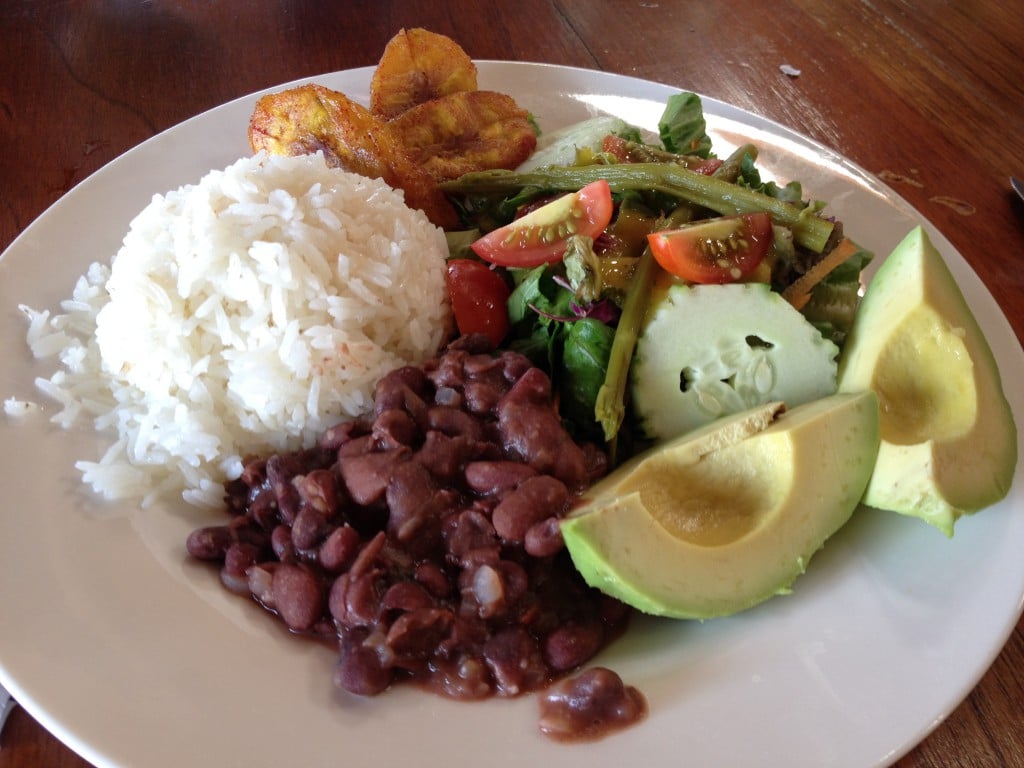 Coffee Break: Beth, Buddy and I went to the dance studio where they both study, and Beth teaches there as well. She had a private dance class and I got to watch. Afterwards we went for a coffee break at a place called Valley Coffee. I was not up for coffee but they did have a nice tea selection. I ordered an ice Chai without milk or sugar, in Spanish, sin leche, sin azúcar and it came back with whipped cream or some kind of frozen milk slush on top. It had to go back. The server brought me another which was just tea and some foamy crushed ice on top. It was more like a cinnamon tea than spicy Chai but I liked it. 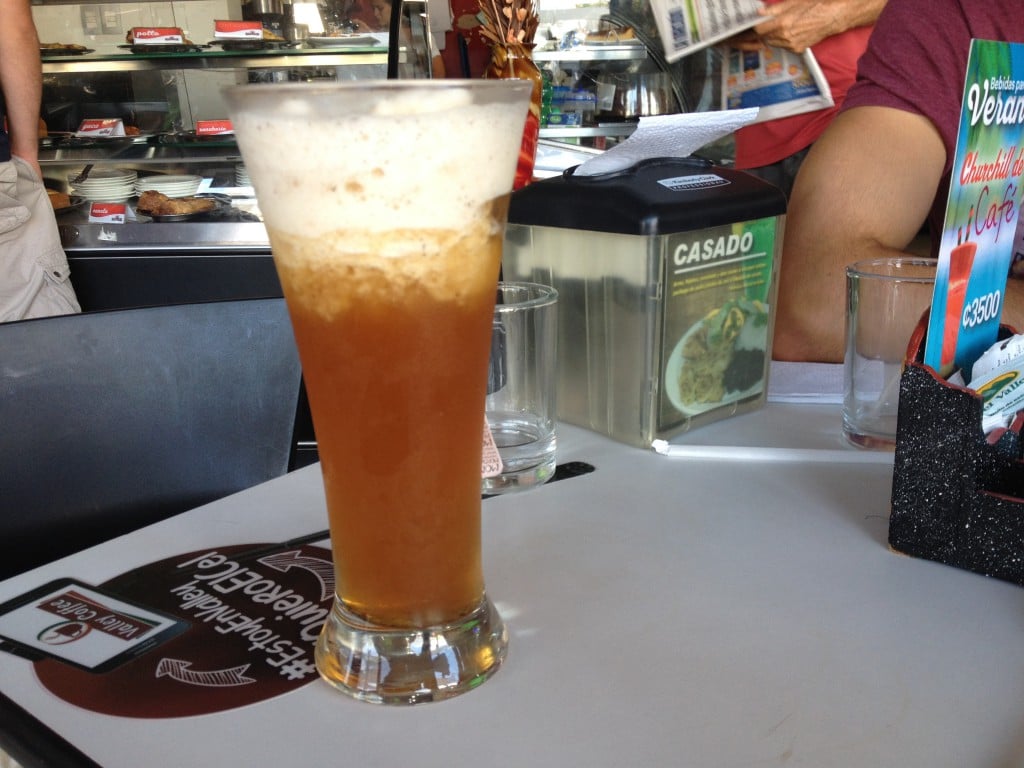 Next was some quick shopping for Beth and then a Pilates class. I had never tried Pilates and this class seemed very much like a yoga class, which suited me fine. It was outdoors under a thatched roof – lovely.

Dinner: We got back to the apartment to wash up and eat. I was so glad to have prepared the red cabbage in the morning. It was so delicious, just plain. I had an avocado with it. 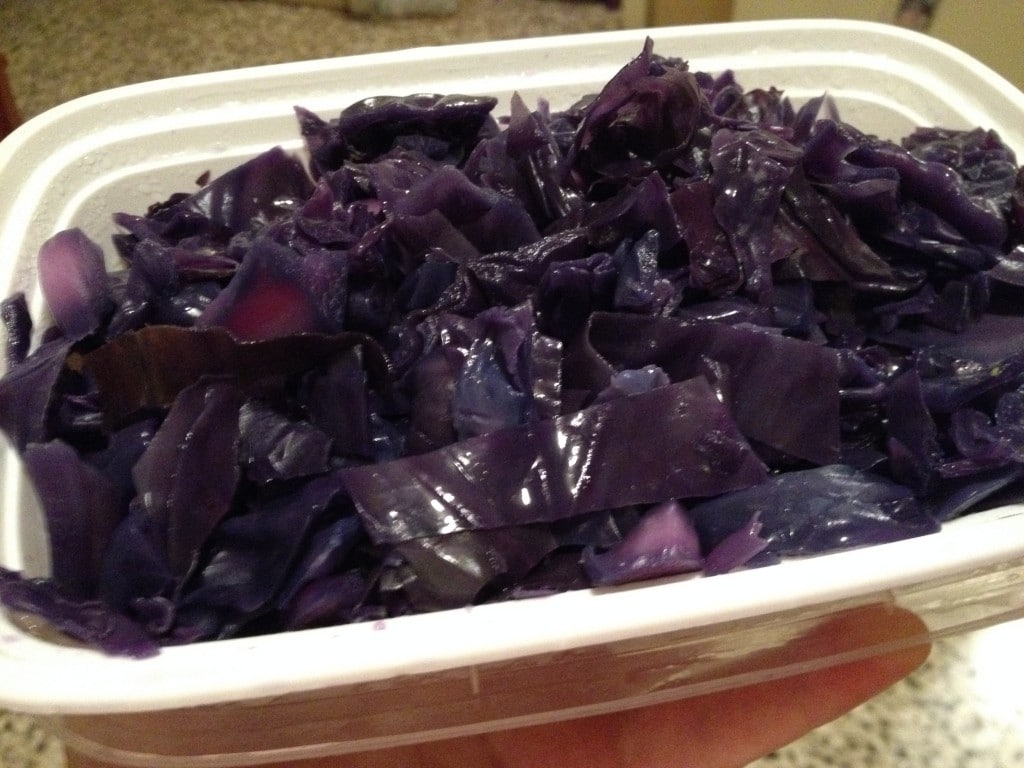 There’s never a dull moment with Beth – she is active all day long. Next stop was Salsa dance class where she and Buddy worked as assistant instructors. I opted to watch.

I was winding down, since I was going to bed at 8pm and waking up at 4am but there was more planned. We were going to a salsa club next. I had a beer and Beth danced a little bit. fortunately we didn’t stay long. We got back to her apartment and I was ready to sleep. I had a big travel day home the next day.

Hey Gary, how’s the cookbook coming along? I love the concept! Hysterical!  Do you have a title yet?

Wow, another fantastic vegan food day! And nice call on the purple food! I love purple food! I saw a mother of two in NYC today with purple hair. That’s no big deal, right? But her kids also had purple hair! Two tiny little purple heads in a big stroller! Wait, sorry, she was talking to purple cabbages. And it wasn’t a big stroller, it was a shopping cart.  The thing that threw me was she was talking baby-talk to the heads of purple cabbage…it’s an honest mistake, I’m not sleeping well.

The working title of the book I’m writing that will also have recipes is, ‘Post Apocalyptic Vegan Cooking While On The Run From Flesh Eating Zombies Wondering: “If I Eat A Vegan Will I Get Enough Protein?”‘ I think the title may be a tad long.

Breakfast found me reading Arthur Miller while eating a side of GLUTEN toast slathered with peanut and apricot butter. I had a rehearsal in Manhattan and worked on my lines from A VIEW FROM THE BRIDGE as I munched away on my two favorite butters. 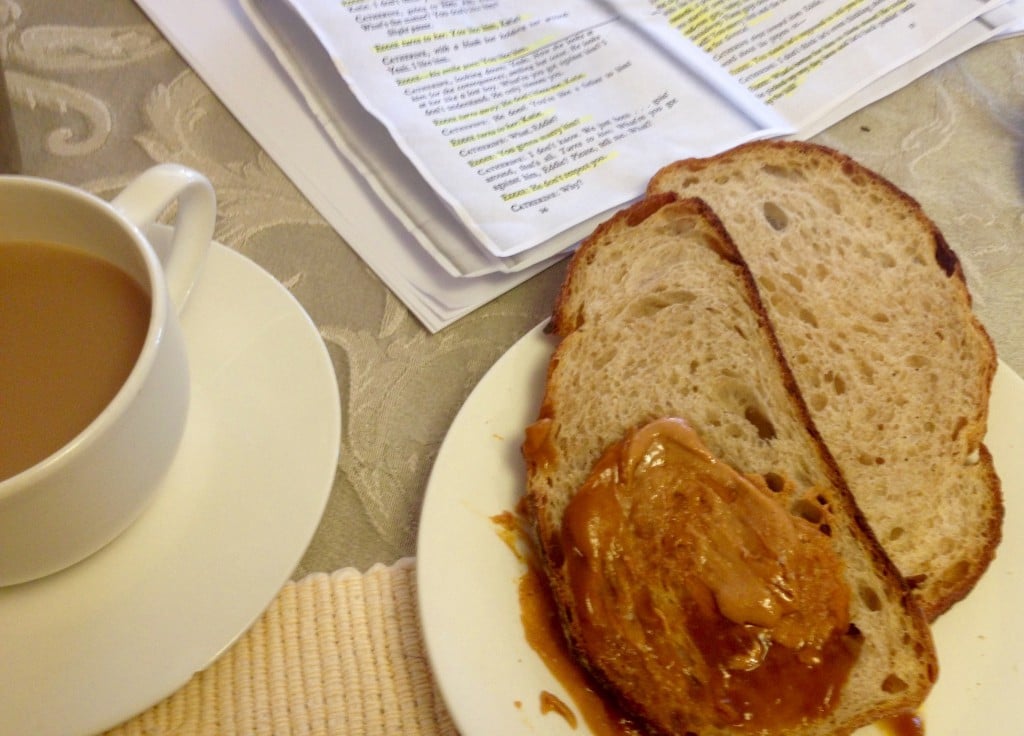 After my rehearsal in Greenwich Village I stopped at Integral Yoga Foods on 13th Street and 8th Avenue and bought some kale and collard greens, a few red potatoes, a few avocados, a few bananas, a ton of oatmeal and some PEANUTS! I really like this market! All of the produce and bulk foods are organic and they don’t sell body parts.

When I got back to the apartment I ate some peanuts while making one of our signature quick breads— Cornbread. There’s a video and recipe on our site. I love this recipe, it’s foolproof and delicious! When the bread cooled I had a few chunks with more apricot butter. And I continued writing my book. I lost track of time. 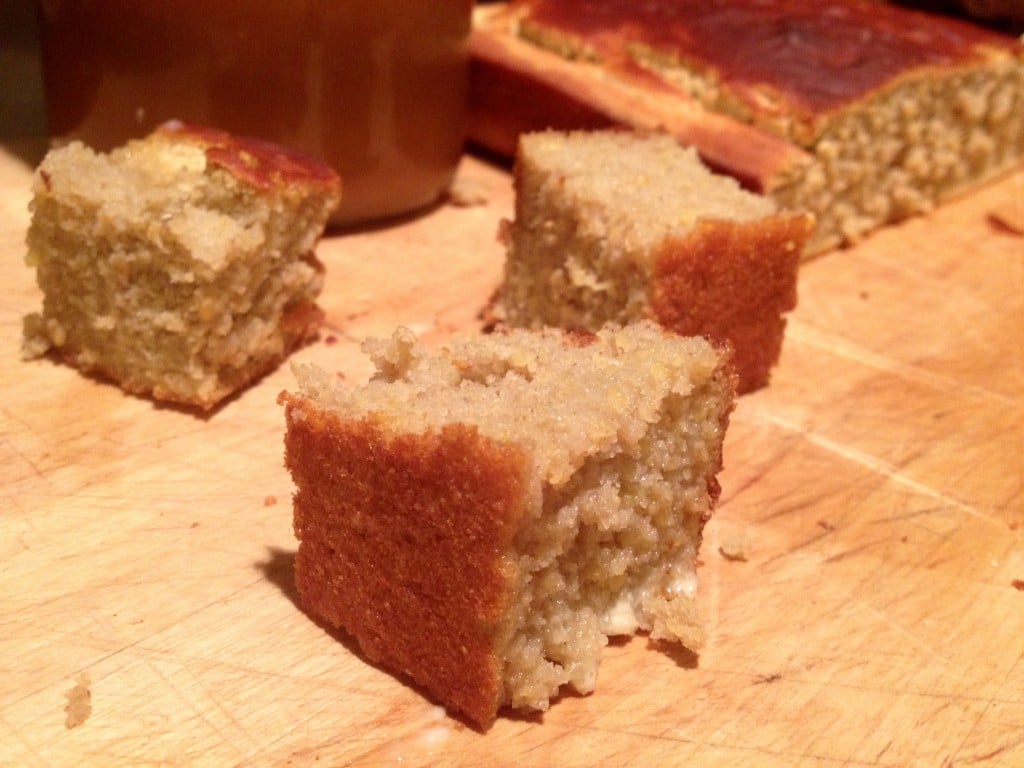 It was late and all I had eaten was peanuts, peanut butter, apricot butter, GLUTEN toast, and gluten-free cornbread. I thought, I should be hungrier but I guess I’m experiencing a mild case of I MISS YOU TOO MUCH TO EAT ANYTHING OTHER THAN BREAD AND BUTTER! Plus, I couldn’t sleep. So I watched a few classic movies on Netflix. One was HIGH SOCIETY with Louis Armstrong, Frank Sinatra, Bing Crosby and Grace Kelly! Here’s a picture of Bing singing and playing the concertina with Grace Kelly on his lap. I wonder if he realizes he’s doing a duck face. 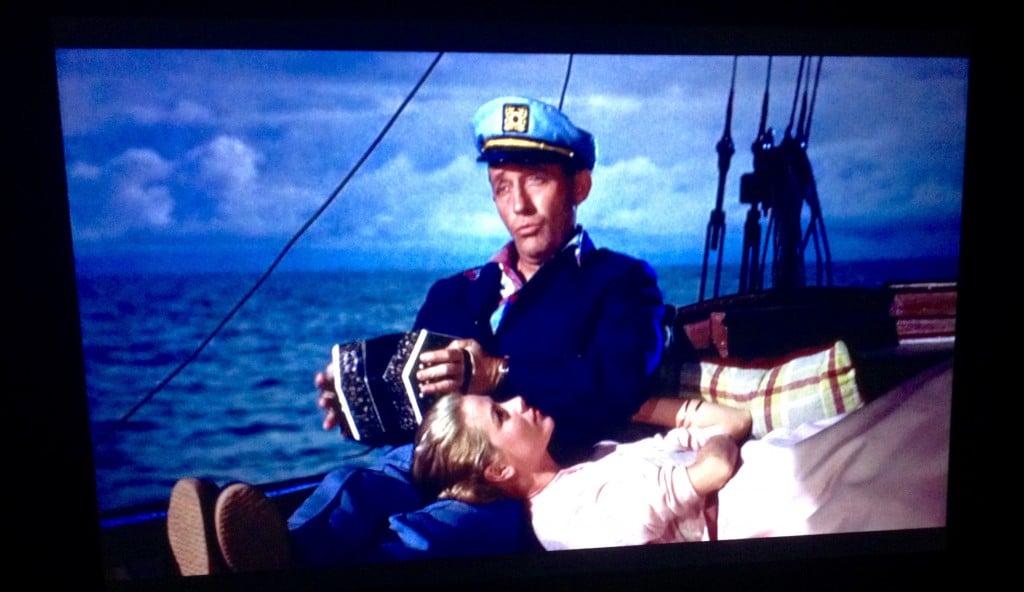 Right around 1:30 AM I felt I needed something GREEN so I got up and I made a smoothie with a big hunk of kale, a large banana, half a cup of raw almonds, a cup and half of water and a bag of frozen raspberries. I also added a teaspoon of maca powder. Oh, and of course I had to add a little apricot butter. Well, guess what? I dropped the jar— apricot butter carnage EVERYWHERE! The lid even wheeled under the piano. “DOH!” It was classic movie comedy time in apartment 3-C! I spent the next hour (or so) picking up broken glass and cleaning apricot butter off of everything while singing my favorite song from the aforementioned film, “Well, Did You Evah! (What A Swell Party This Is).”  Now that’s a perfect title. But of course, it’s Cole Porter. 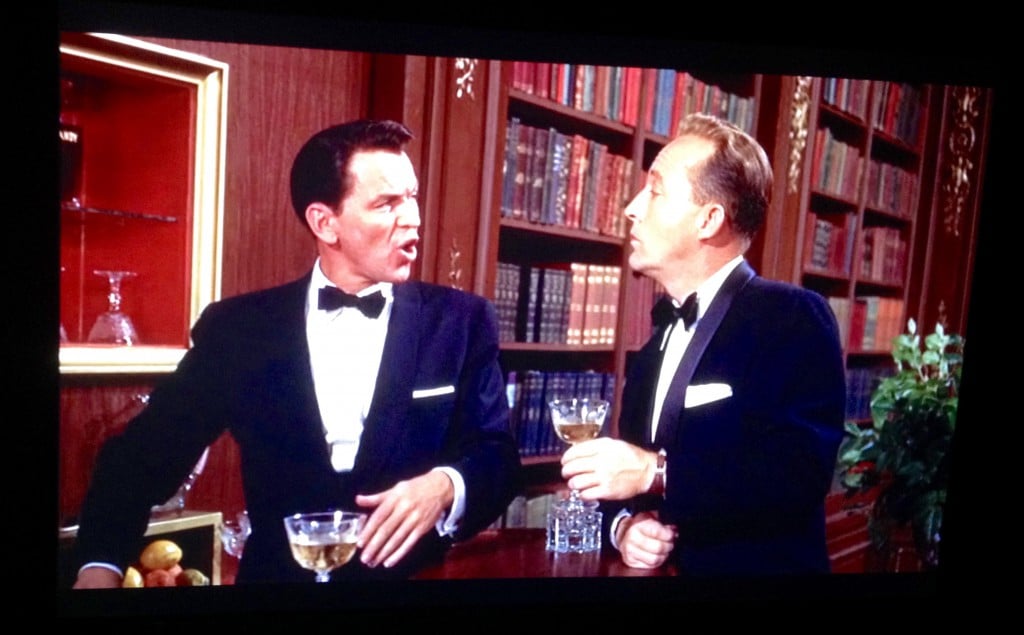 It was around 2:30 AM when I got back to bed with my smoothie that was now more like a warm kale and banana soup. But it was tasty.