Breakfast: It was heaven on Earth. I kid you not. While Gary was waking up I made Steel Cut Oats cooked with Apples, and topped with Bananas, Blueberries and soaked Chia Seeds. We brought our bowls and cups of Earl Grey Tea out to the picnic table by the pool. We were under the umbrella and in the shade. There was a cool breeze. The air was so sweet. It was peaceful and quiet. After eating our oats, we brought our laptops to the table and worked – Gary on his play and me on this blog and later on my book. Four hours breezed by. 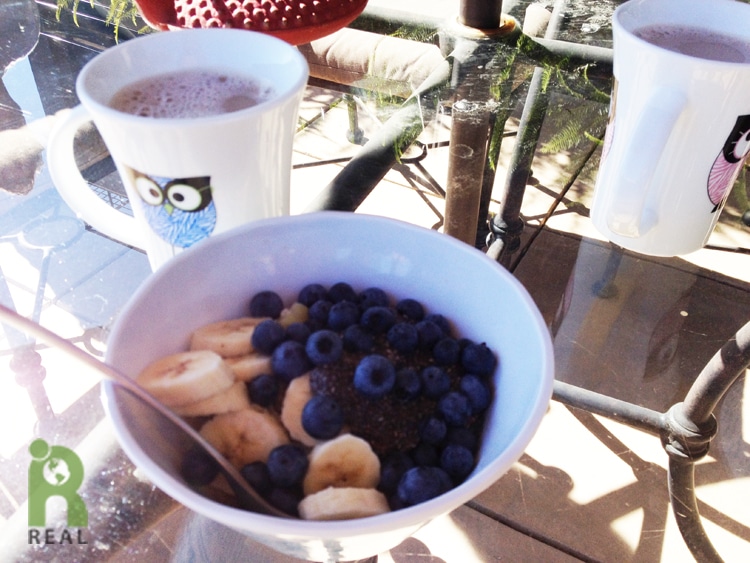 Lunch: Late in the afternoon and hungry, we went to Whole Foods in Los Gatos to pick up some grocery items and get me a green juice. You may have noticed I have not been having a daily green juice which I have done religiously for almost ten years. I plan on picking up the routine when back in New York, but it is not very practical while away from home. We pick one up at Whole Foods in Los Gatos or Campbell from time to time. I went over to the juice bar and everything looked so neat and clean and EMPTY. Gary noticed it first – the juicer was gone. They are no longer making juices. In stead they are offering pre-made bottled juices which the young employee told me were cold-pressed and healthier than the juices they made fresh, to order. Cold-pressed? Unimpressed! I don’t want a bottled green juice, I want one made in front of me. Occasionally I will get a bottle juice but it’s not a habit I want to make. Disappointed I went over to the Customer Server counter and spoke with Adam. He told me many people have complained. Perhaps they will hear us. If I was home in New York I would be making my own juices. And in New York, there are juice bars every where you look. What’s going on in California?

Still hungry, Gary suggested we go to the Veggie Grill. They did not disappoint. I got the Savory Kale Caesar Salad with marinated kale, romaine hearts, crumbled tempeh bacon, avocado, cucumber, croutons, veggie parmesan. Wow, I could smell that vegan parmesan as soon as my plate was brought to the table. Gary got the Buffalo Bomber, serve bread-free on a bed of Kale with Crispy Chickin’ tossed with spicy Buffalo sauce, tomato, red onion, lettuce, creamy ranch dressing. Both were very good. 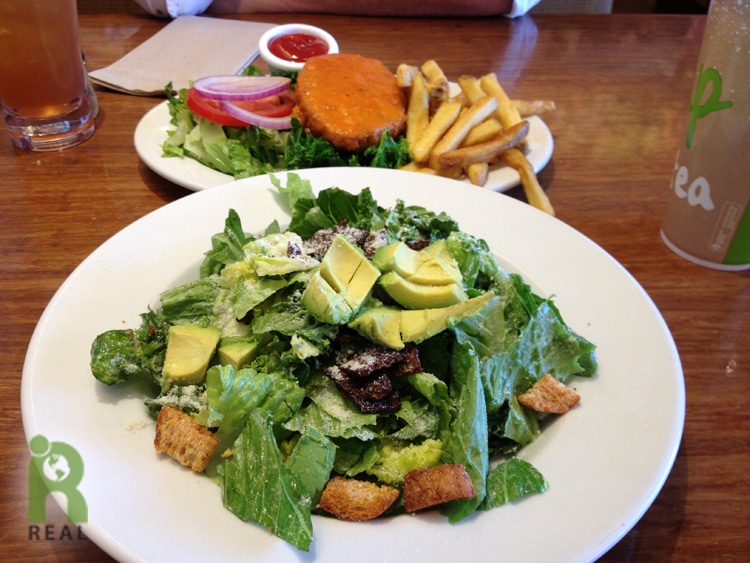 Dinner: We were invited to a dinner party at the house with some of Gary’s brother Mark and sister-in-law Tammy’s friends. There were plenty of dishes for the vegans. There was fresh fruit. 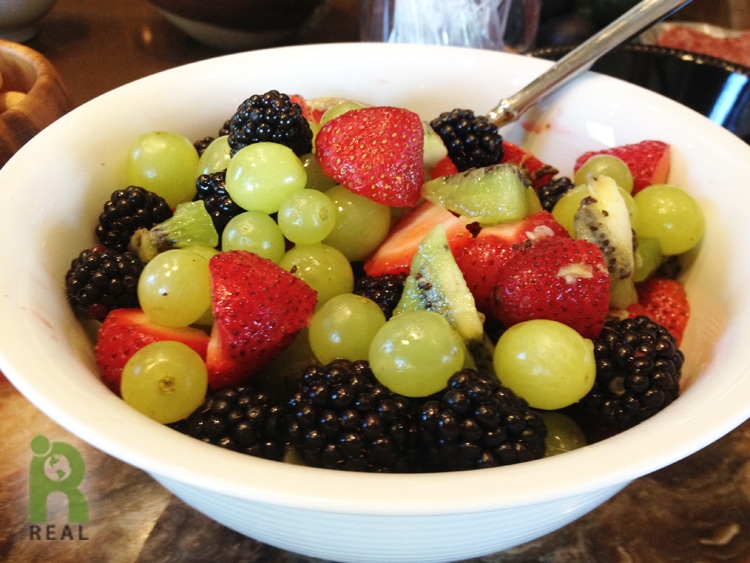 A spread of hummus, carrots, salsa, chips and edamame. I will pause here to give you my classic rant about Sabra Hummus. This brand seems to be taking over America’s shelves and does a disservice to the traditional Hummus, made with chickpeas and/or fava beans, lemon, olive oil, tahini and salt. Sabra Hummus is bastardized with Soybean Oil and Potassium Sorbate. No oil is really healthy, but soybean oil is one of the worst and if not specified as organic, it is likely GMO. No one needs to put the preservative potassium sorbate in their bodies. The word “sabra” means “thorny cactus” and is also slang for a native-born Israeli. Sabra is the largest manufacturer of hummus in the world. Make your own hummus. It is easy and so much better. Here is our REAL Hummus recipe. 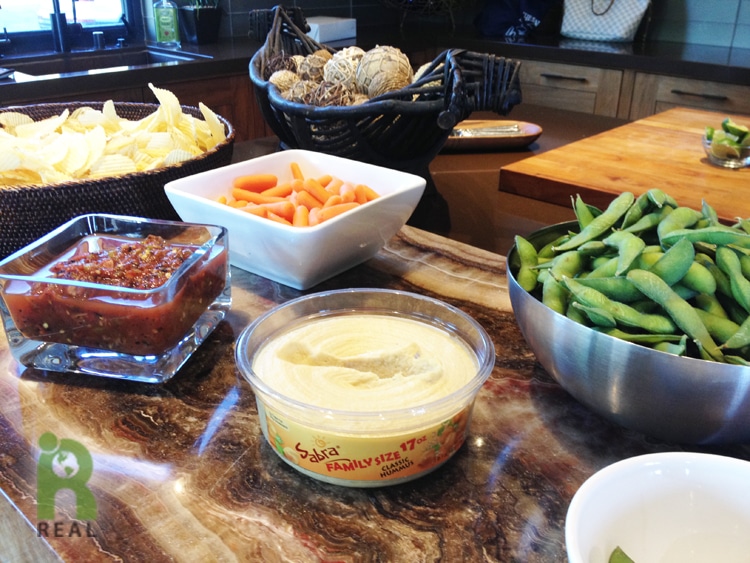 Now back to the party. One guest made a lovely Red Quinoa Salad with Corn, Red Pepper, Avocado and Black Beans. 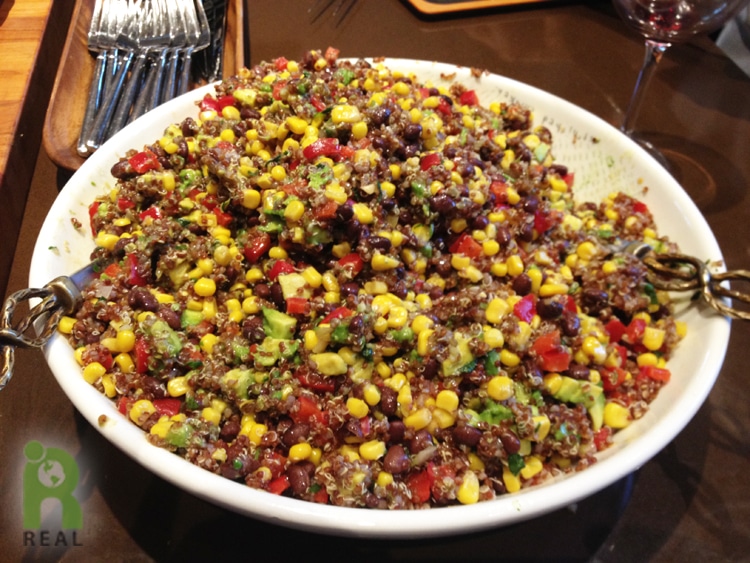 Another guest created this Kale Bruschetta after having a similar version at an event. All the others had cheese, but she made three without for the vegans to try. A quiet nod to Great Britain, Brexit and their new prime minister Theresa May on the cocktail napkin. It applies to all of us, everywhere as well, in these inexplicable violent times. 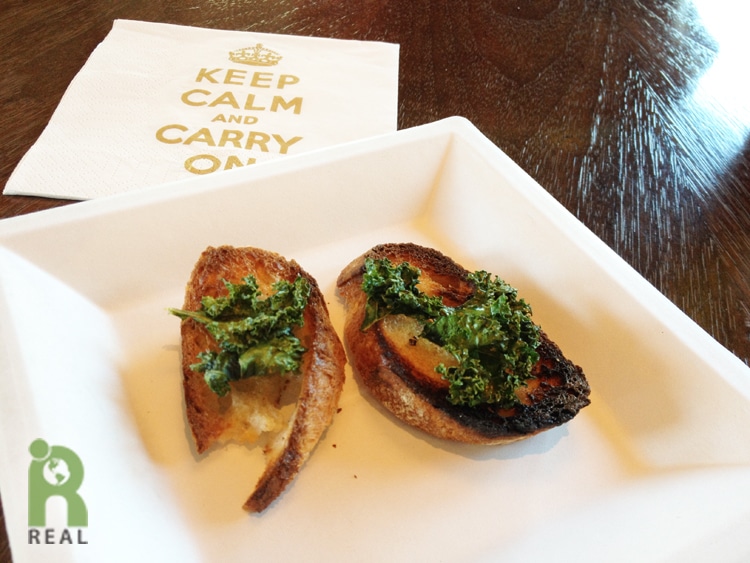 There was a green salad and the guest who put it together read the ingredients in the bottle Paul Newman dressing aloud to us to confirm it was free of animal ingredients. Thank you. 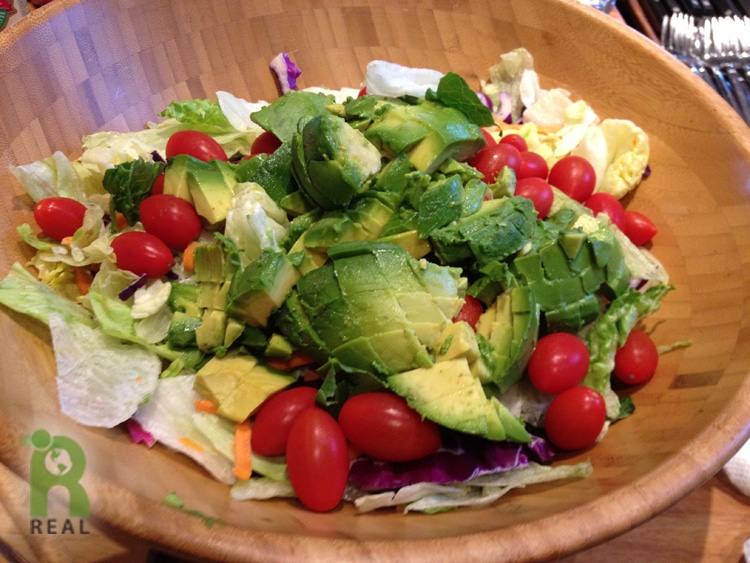 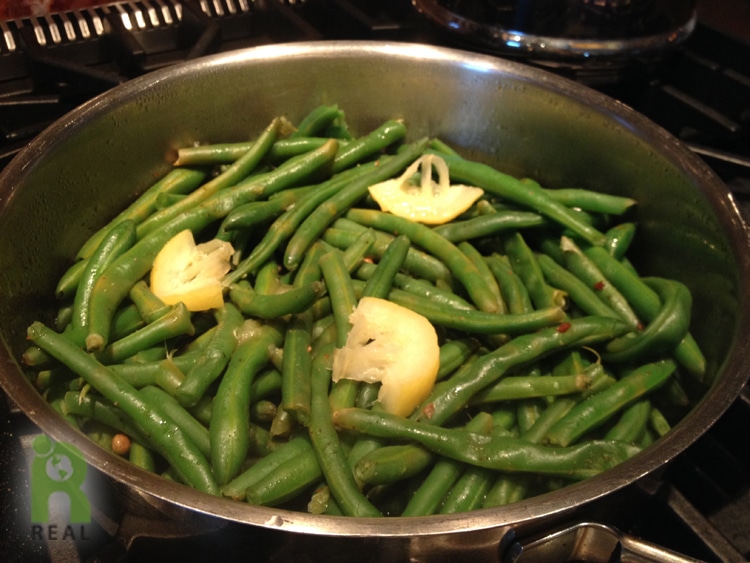 He also cooked up a beast of a portobello for me, prepared with white wine and lemon juice. As you know he does not like mushroom, he prepared a couple of Wildwood SpouTofu Burgers for himself. 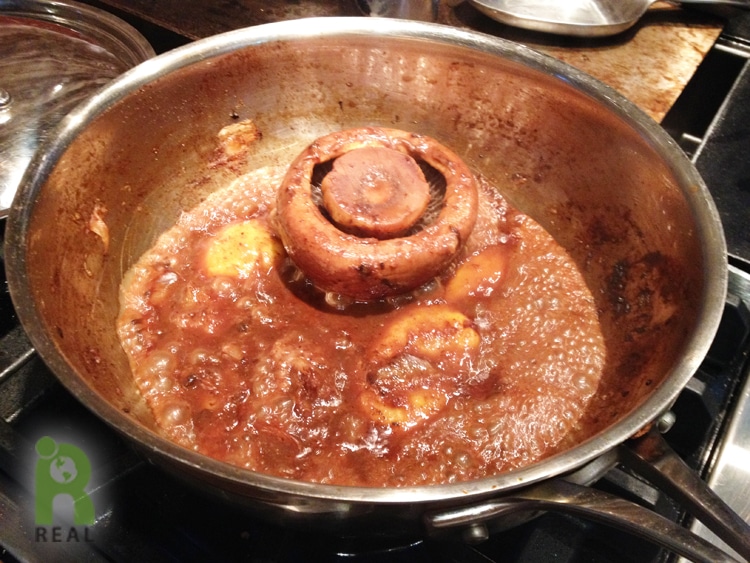 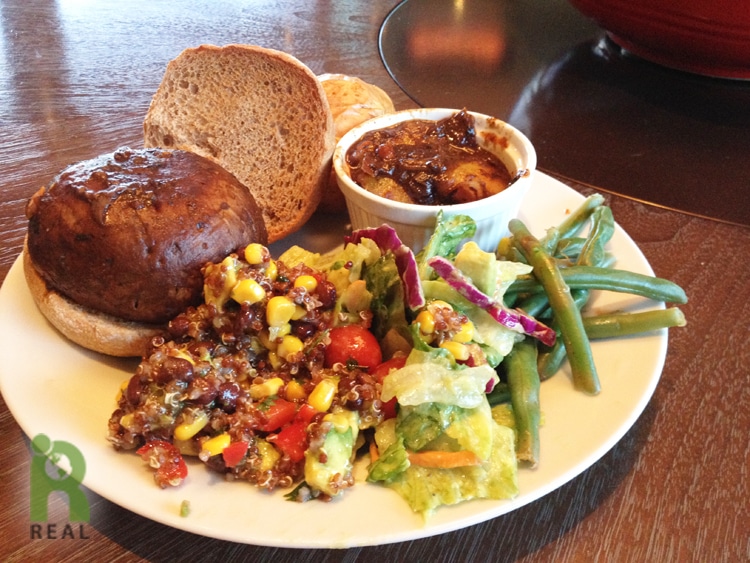