Breakfast: What to eat when you have a refrigerator full of leftovers? We had a lot of matzo balls, which are really quinoa balls. I sauteed some onions and mix them with the quinoa balls and added some leftover gravy from the Passover vegan brisket. Kukitcha was my choice of tea. 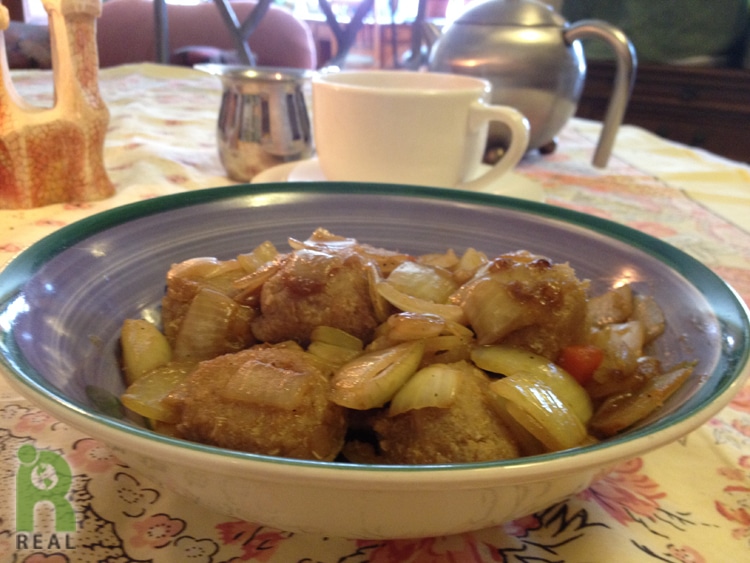 Lunch: It was Easter Sunday and Gary wanted to make a special Easter dinner. He was on his feet in the kitchen for hours. I wanted to get some lunch and I grabbed some of the vegan Gefilte fish and a piece of matzoh. I am thrilled with this recipe and it’s so much fun to scoop it out of the jar with the aspic just like the actual fish version you can buy in the store. I washed it down with my daily green juice of kale, collards, carrots, celery and lemon. 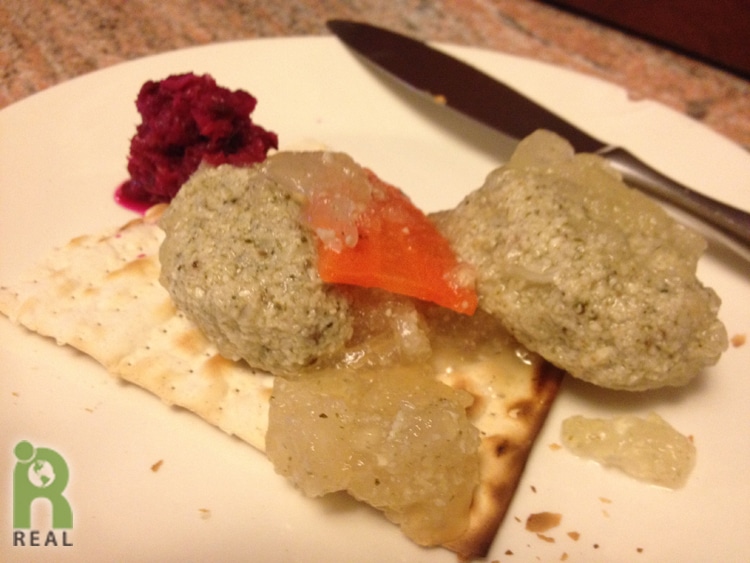 I wasn’t exactly sure what dinner was going to be. I asked if I could help and Gary said I could do one thing. I could make cannoli shells. Okay. I had never made cannoli before and now I was going to make a vegan, gluten-free version that was baked and not deep fried. I looked at some of the traditional cannoli shell recipes and from there I came up with a recipe that I hoped would work. The dough turned out to be very easy to work with and roll out. We were both giggling with delight when the shells came out of the oven. They were good! 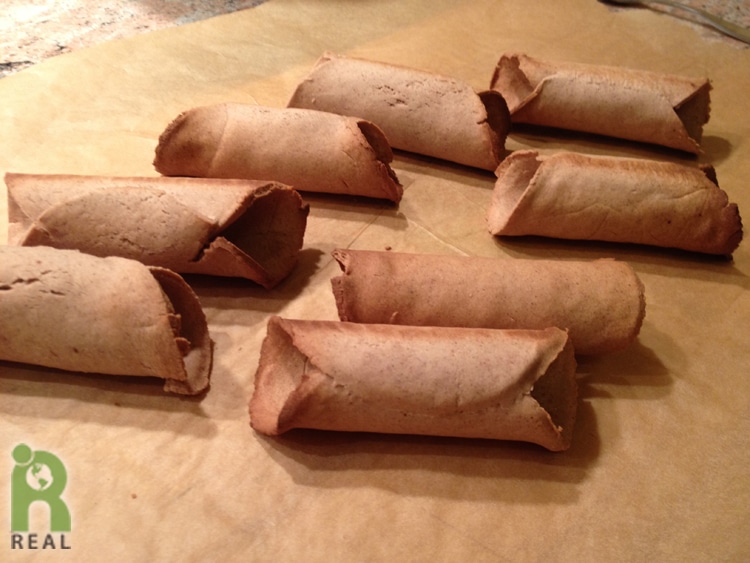 Dinner: I sat down for dinner and was served an amazing meal. We made a toast with Prosecco. First course we decided to call Mousagna, a dish that was cross between moussaka and lasagna with a spicy tomato sauce, seasoned with Middle Eastern Spices. It was delicious.

I was blown away by the main course. It was stunning – Marinated Tempeh stack with Smashed Potatoes, Roasted Indian Eggplant, Sautéed Roasted Root Vegetables in a Sauce Espagnole. The eggplant melted in your mouth, the tempeh was tender and juicy with just enough creamy potato in between. The sauce was rich and flavorful, but not salty. I used a spoon to get every last drop on my plate. 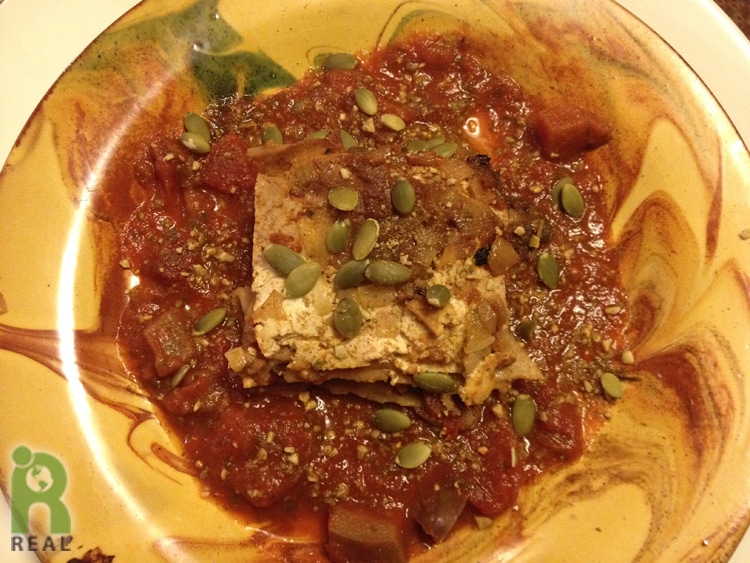 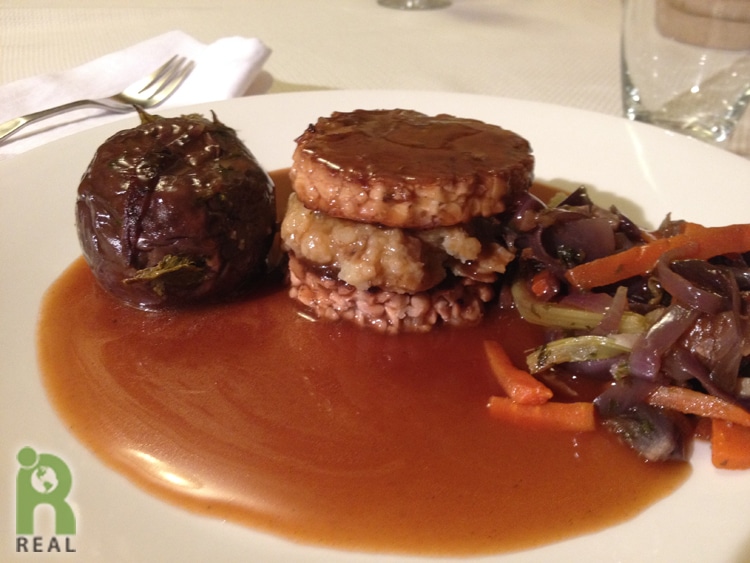 Gary made the cannoli filling and filled the freshly backed shells. OMG! Yes, it tasted as good as it looks. 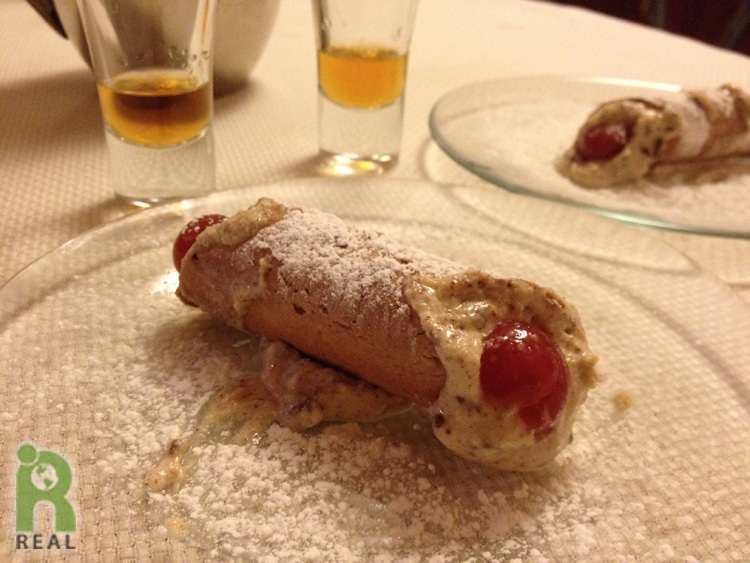 If it were up to me, Gary would get a Michelin star for this meal!