Breakfast: A smiling, sunny pile of Polenta was served for breakfast with a choice of toppings: Coconut, Flax Seeds, Raspberries, Walnuts and Maple Syrup along with Vanilla Black Tea. 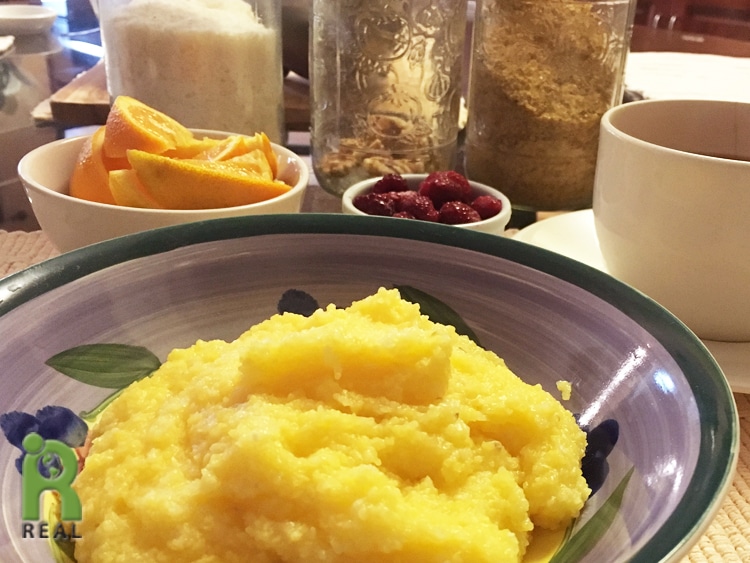 Lunch: I had taken 2 cups of green split peas a couple of days before and had them soaking. I rinsed them twice a day, adding in fresh water. It was time to get them cooking. I rinsed them and added in enough water to cover them. When they were soft I mixed in about 1/2 cup of a dried parsley/leek/fenugreek, about 2 tablespoons of dried onion powder, 1 teaspoon of turmeric, 1/2 teaspoon of smoke chili powder and a teaspoon of paprika. I cooked it for about 20 minutes and then blended it all together making a creamy fragrant soup. We had it with the last few slices of Caraway Seed Whole Grain Bread. 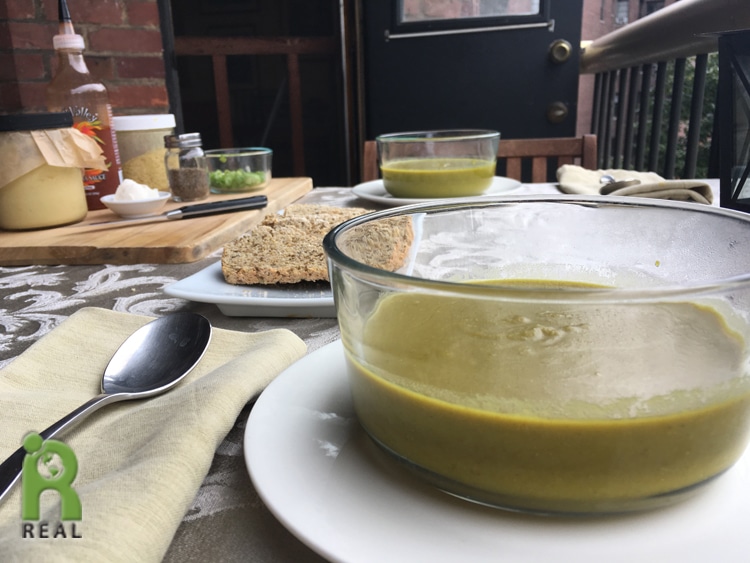 Dinner: We had been invited to attend an event called Laika Live, hosted by Julie Gueraseva of Laika Magazine. She was one of the panelists in addition to Lauren Toyota, Mississippi Vegan, and Gabrielle Stubbert. Joshua Katcher led the discussion which was entitled “Creative Altruism” and it took place at WeWork Brooklyn Heights. I have interviewed Julie Gueraseva and Joshua Katcher on my radio show but I have to confess I did not know the other panelists. And that was one of the things that was so cool about the event. The vegan world is expanding so quickly with so many vegan products, businesses and entrepreneurs, it’s impossible to keep track of everything and everyone.

We were promised vegan cheeses by Riverdel and New York’s organic Smart Beer! How could we pass that up? Gary and I showed up a few minutes before the panel discussion was to start. I grabbed a plate. It became finger food, since there were no more plastic forks. 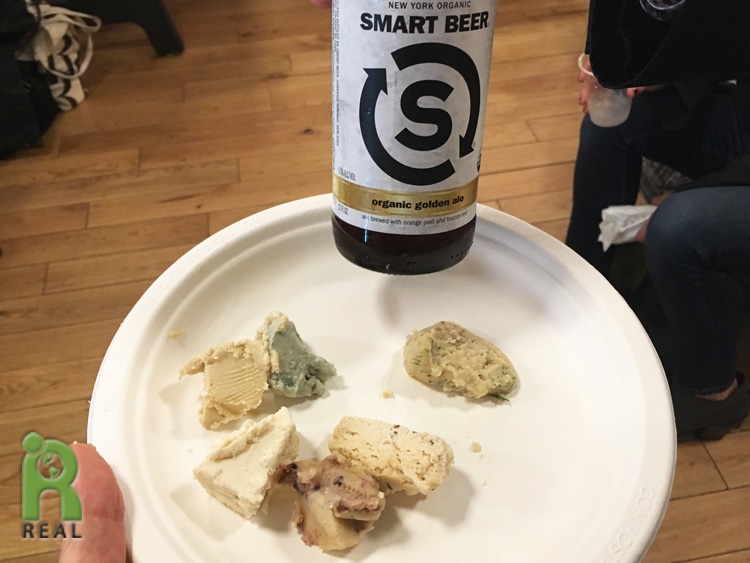 The panelists talked about their personal stories. 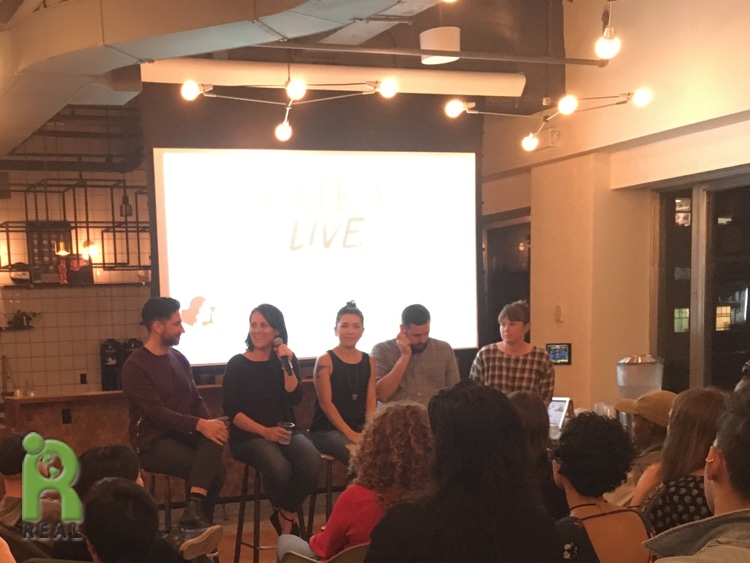 During the discussion, I drifted back in time for a moment, almost 15 years ago. On October 9, 2001 I hosted my first EarthSave NYC dinner/lecture. I had originally planned for the event to take place on September 12, 2001, at a venue in the Wall Street area. I don’t have to tell you what happened then. That event was canceled, due to some very unforeseen and unfortunate circumstances that changed the world. I scrambled to find a venue to begin my monthly dinner/lecture series the next month.

We ended up at the Med Grill Café at the Trump Tower on 5th Avenue. Business was down as the city tried to recover from the terrorist attack and the price I arranged for a prix fixe, all-vegan buffet was very reasonable. The space was stunning and wonderful for our premier meeting. It was so exciting when we arrived at the entrance. 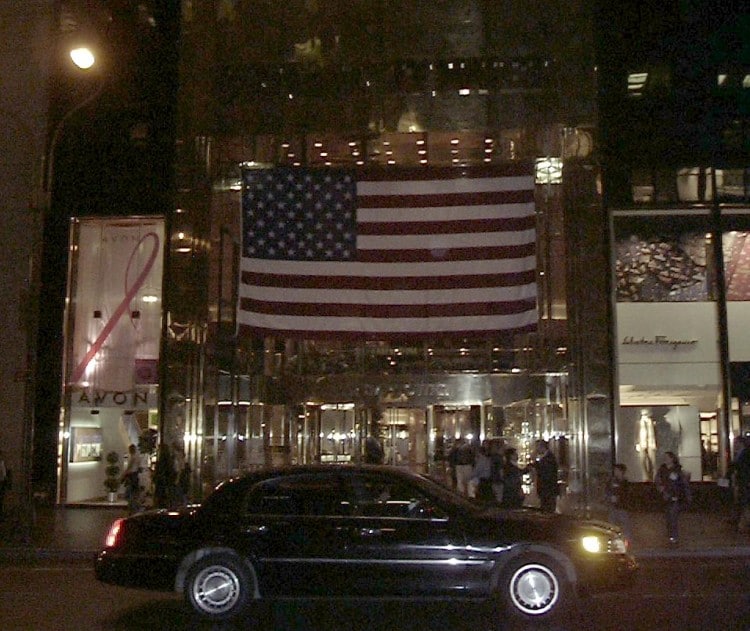 Originally, I had arranged for Howard Lyman, the Mad Cowboy, to be the first speaker and rescheduled him for another event months later. Robert Cohen, of NotMilk.com was our featured speaker for the premier. 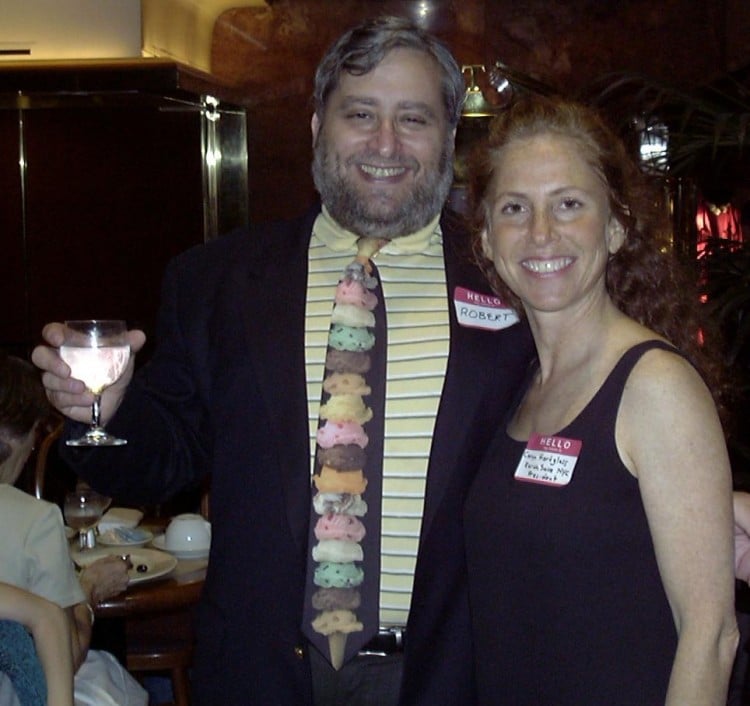 It was an amazing evening! The turnout was spectacular, the food was terrific, the ambiance was fabulous. 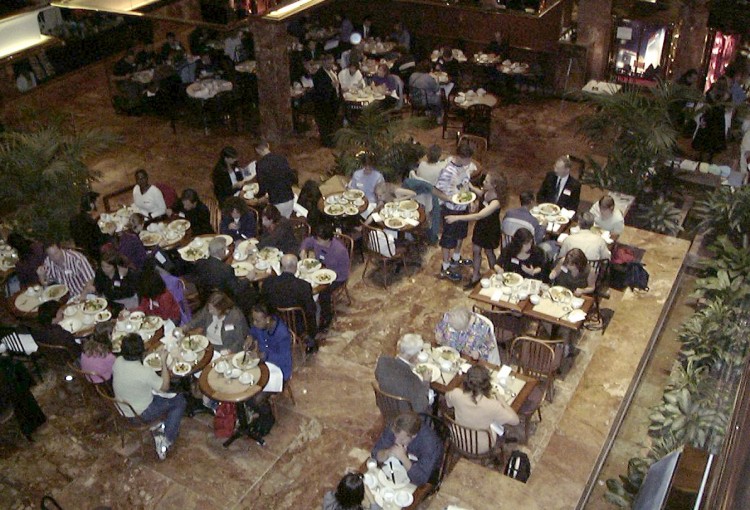 There were so many people! 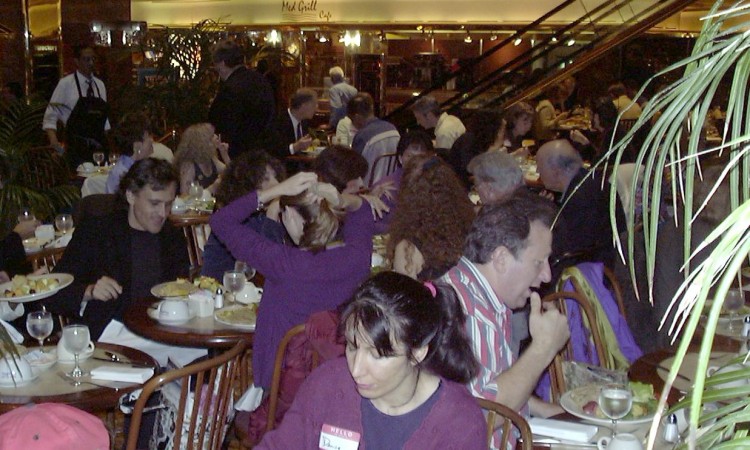 I had the help of wonderful volunteers, including Erica Kubersky… 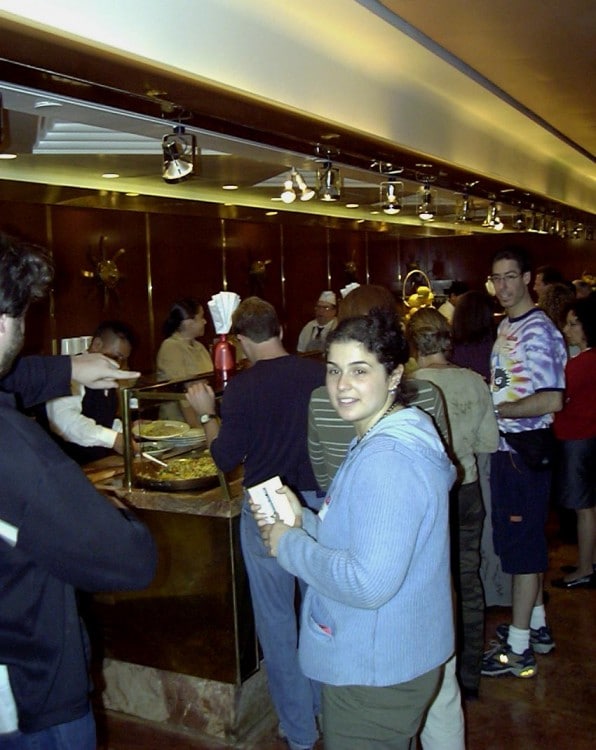 …and her sister Sara. 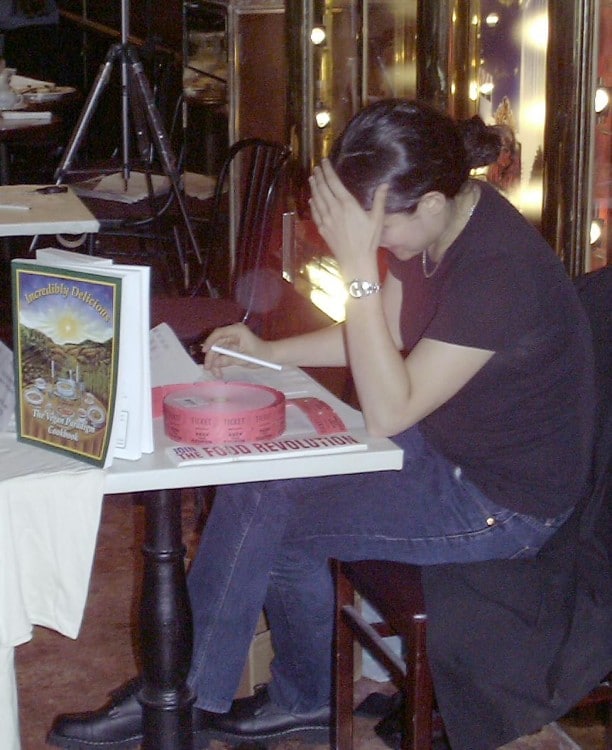 The Kubersky sisters had this idea of opening up a vegan shoe store called Mooshoes. A vegan shoe store! Who ever heard of such a thing? I could only dream of such a store. And they made it a dream come true, not only in Manhattan but in Los Angeles and in the great store in the sky, the Internet.

There were celebrities too! Pamela Rice, well know at the time for her popular one-page paper sheet called 101 Reasons Why I’m A Vegetarian, had inspired so many people to go vegetarian and vegan. (Long before social media, we disseminated information on paper, with leaflets and brochures, that we printed with the change we could scrounge up to pass out on street corners, at events and place in coveted locations in health food stores.) That one-page information sheet later became a book of the same title and Pam went on to create the annual Veggie Pride Parade in Manhattan. She attended our premier with her husband Alan and friend, Bernie Goetz. 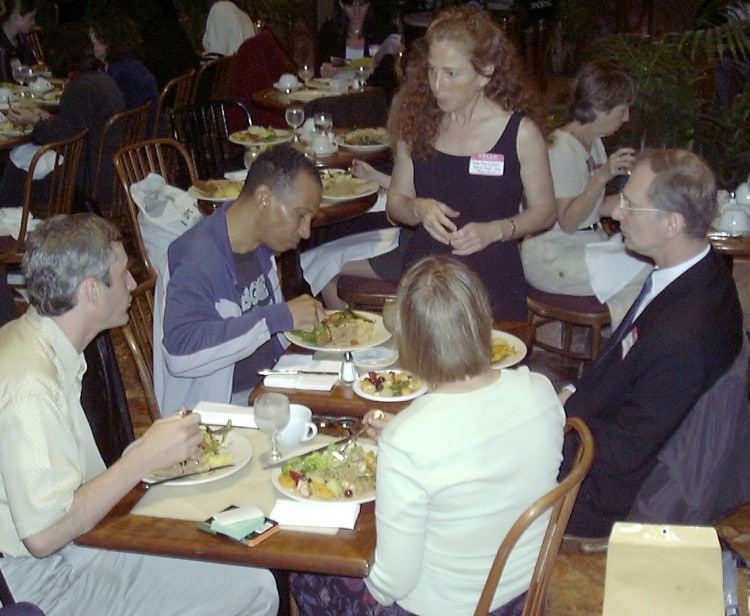 Even my parents joined in the fun and brought their friends. 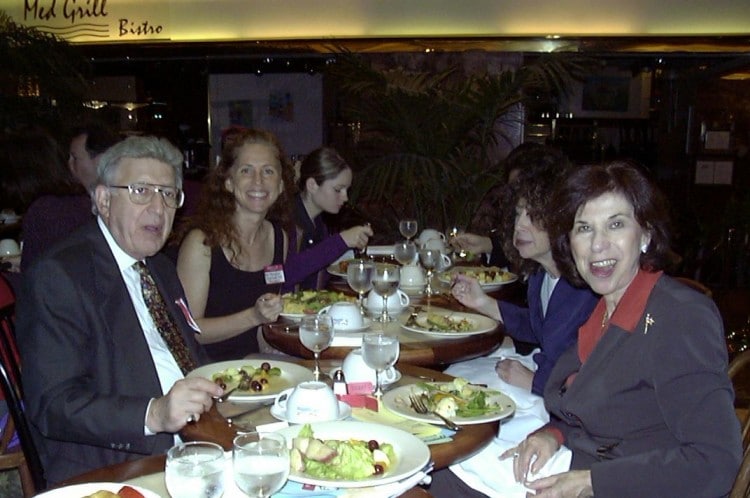 I came out of my daydream and was brought back to present time when I realized I was standing next to vegan cookbook author extraordinaire, Terry Hope Romero. I found out she and Isa Chandra Moskowitz are working on the 10-year Anniversary Edition of Veganomicon which was original published in 2007. Almost ten years have passed since that innovative cookbook hit bookstores everywhere. (Remember bookstores? Remember books?) 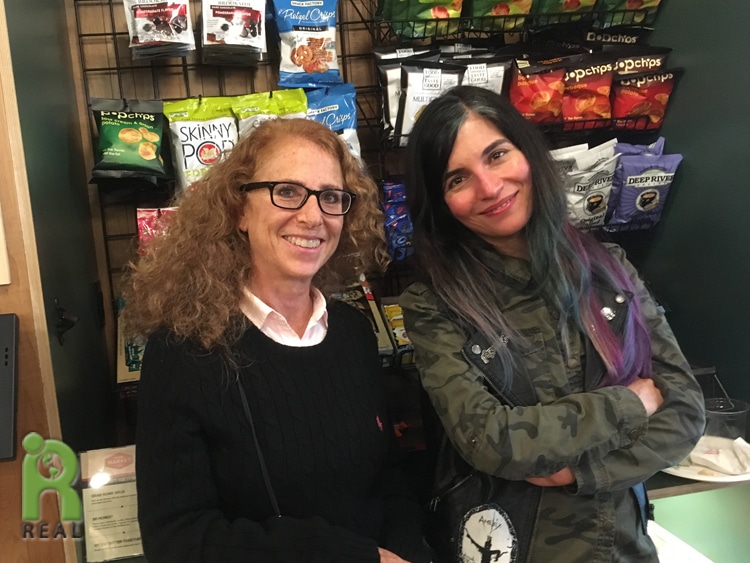 I looked around the room at all the people who were interested about veganism, and making it not only a lifestyle but a form of personal expression and possibly a business career. So much has changed. I could not help but smile all the way home. All those seeds we planted as activists not so long ago had taken root. And even though I cringed thinking of what the name Trump means to us today in 2016, it was still a very good night. 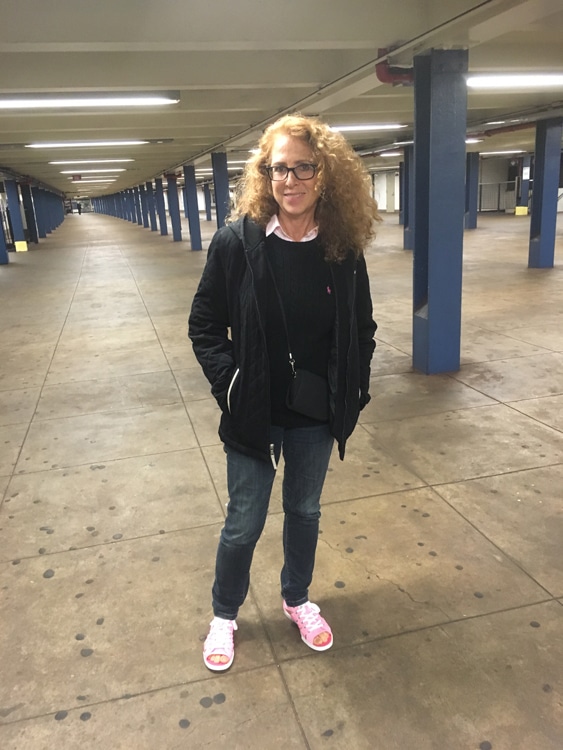 Evening: Once at home, we hit the Corn Thins for a late night light meal. We spread mashed Bananas on them and I think there was little Peanut Butter and Apricot Butter in the mix. We had a lot to do and were up late long after we ate, so grabbing some energy was a good idea. We shared a pot of Vanilla Almond Rooibos tea.