Breakfast: My friend Nancy came down from San Francisco to spend some time. We hadn’t seen each other in a while and it was time to catch up. We had some time too, to share our disbelief regarding who would become the next U.S. president tomorrow. Many of us have been traumatized since November 8 and at the very least, we need to talk about it and not accept it as normal. We went to Great Bear Coffee, a good place for talk (even though most people are looking at their phones). Nancy got a Soy Latte and I wanted a cup of tea. You should know me and tea by now. I looked at their list of teas and there was an oolong tea that was “loose”. I ordered that. A tall paper cup was placed in front of me and we waited for the Soy Latte. It dawned on me to take the cup and I looked inside of it. At the bottom were a few tea leaves, maybe 3/4 of a teaspoon, a minute amount. I asked. “What am I supposed to do with this?” The helpful barrister pointed where the hot water was. “You mean I am supposed to brew this tiny amount of tea in my cup?” This day was not starting off very well. The barrister said they could brew the tea in a pot. It came with a little more tea and cost a dollar more. I splurged. I also asked for a glass to drink the tea in, instead of a disposable cup. Am I asking for too much? 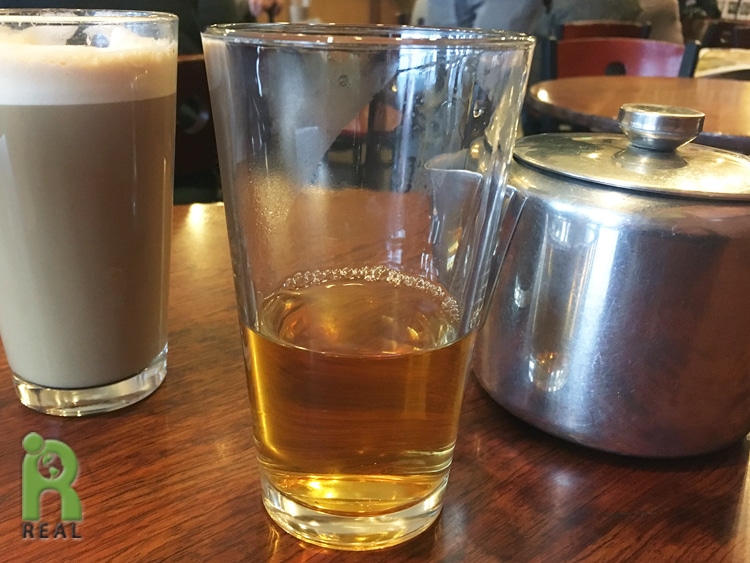 Lunch: We lingered a long time at the coffee shop and then went down the street to Hanna Bistro for lunch. You might remember a couple of years ago I was at Hanna and the server offered us a vegan menu. At a subsequent visit, I learned that the vegan menu was not for the customers but just a reference for the servers to know what was gluten-free and what was vegetarian or vegan. I mentioned the vegan menu again this time and got the same response. Oh well, so much for a vegan menu. Still after a bit of questioning and negotiating we ordered. I got the Lemongrass Tofu. 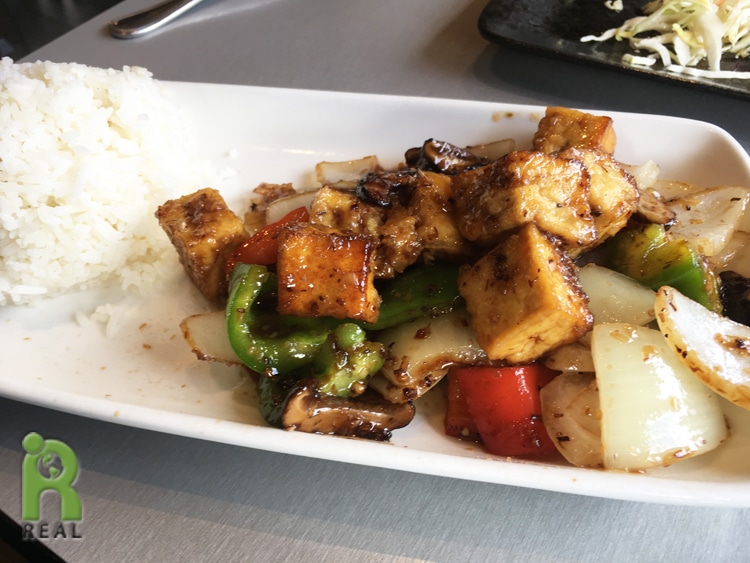 It came with Spring Rolls and Cabbage Salad. 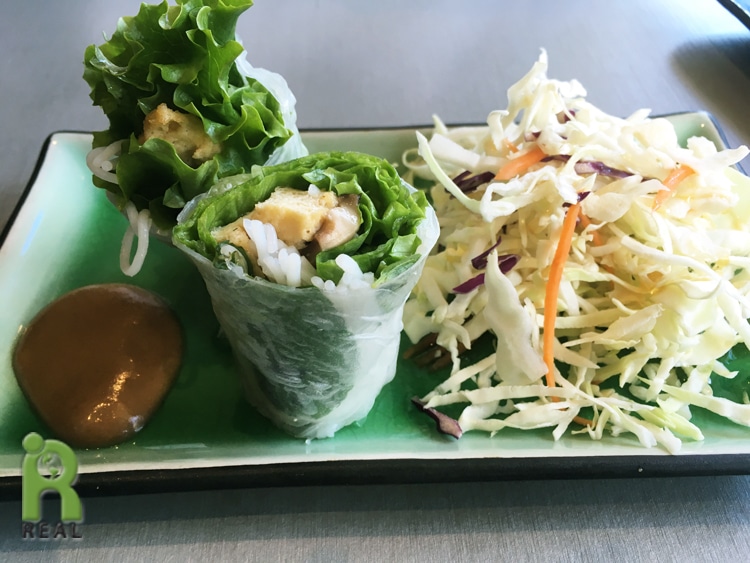 Nancy ordered the Rice Vermicelli Noodle Bowl, served with imperial rolls, lettuce, cucumber, mint, basil and roasted peanuts, made to order with soy sauce and vinegar instead of the chili paste with fish sauce. 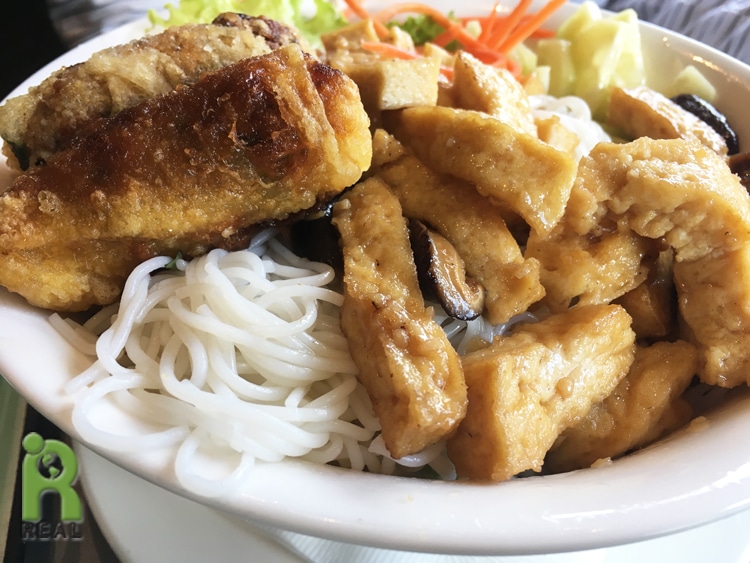 Snack: I felt I would need some greens before going to Fiddler rehearsal. Gary was planning on choreographing the opening Tradition number and I would be conducting, which I am discovering to be a great upper body workout. I made an Arugula Wrap and served it with an Arugula side salad. 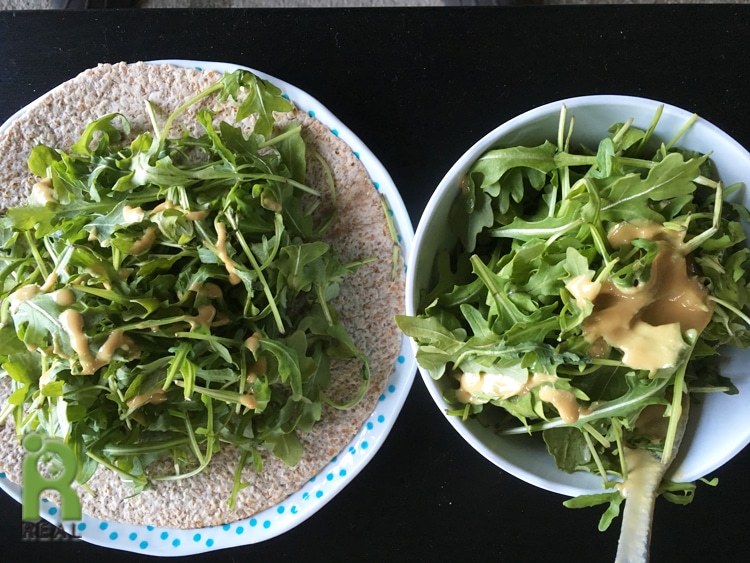 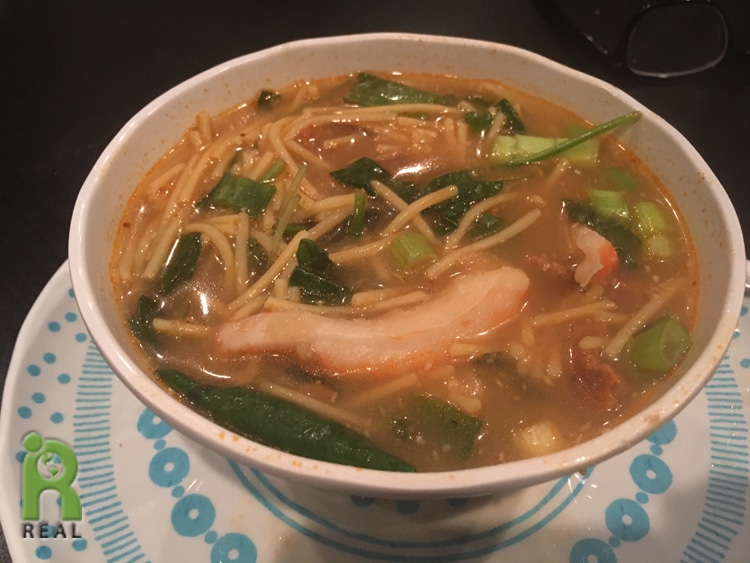