Breakfast: Gary’s been asked by his niece, Lisa and her fiancé Brian, to officiate at their wedding in October. So sweet! We got up early and drove to their home in Pleasant Hill, about an hour away. Lisa had prepared Soaked Oats with fresh Blueberries and Soy Milk for us. 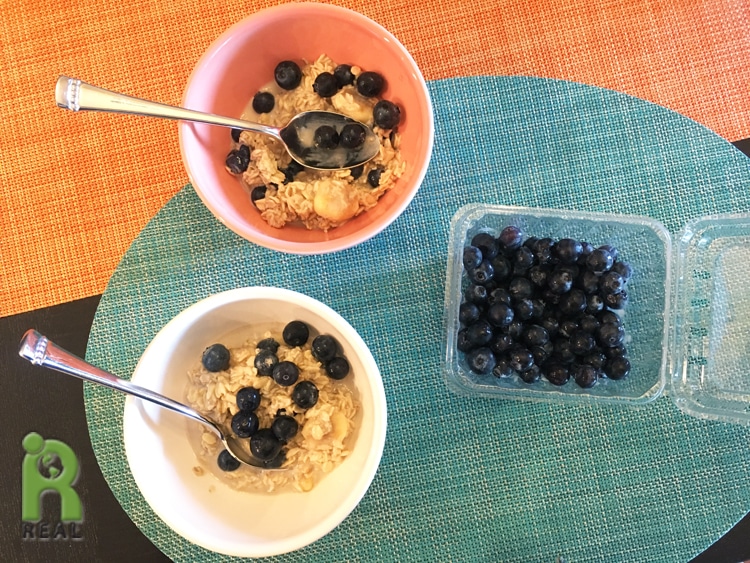 Lunch: We drove a little bit around the area and then realized that the Millennium Restaurant was on the way back south. We stopped there for lunch. Gary ordered a Hibiscus tea. He realized too late that he should not have added any soy milk to this tea. It’s sours and curdles. 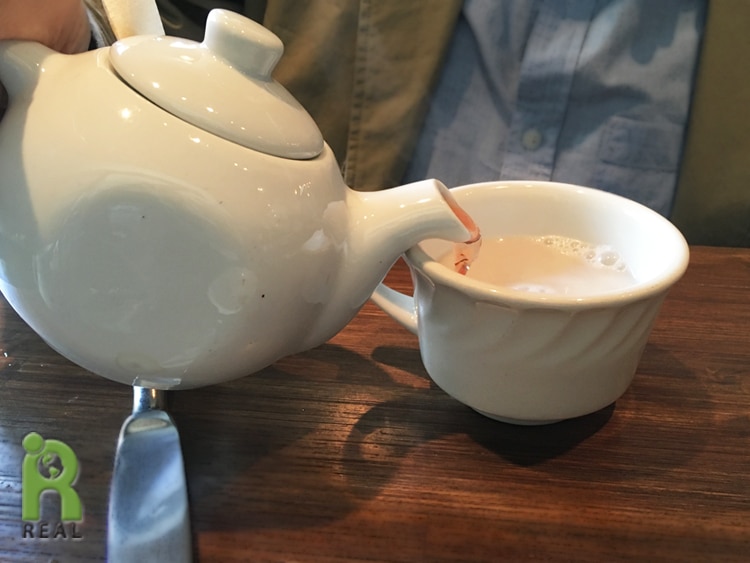 Gary’s sandwich had Eggplant Bacon and was served with a side of Roasted Cauliflower. 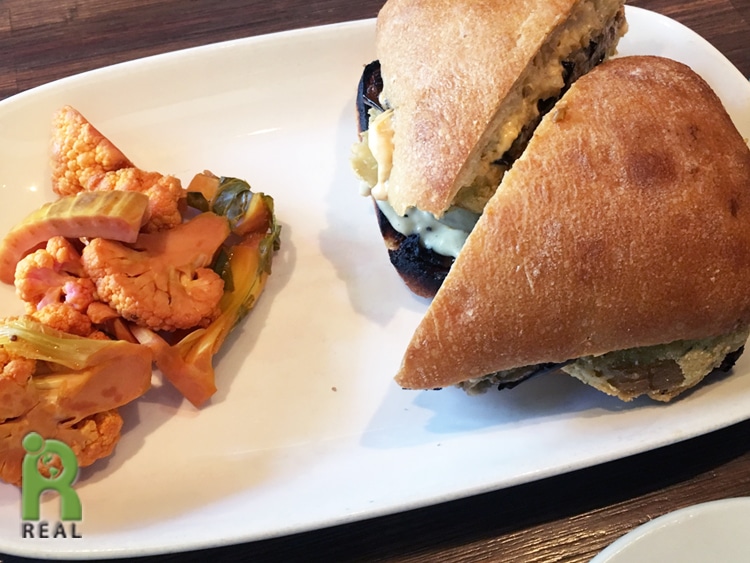 My dish was a mix of Grilled Polenta, Creamy Polenta, Broad Beans, Red Peppers and Zucchini. The food is good here and I am glad we had a chance to visit. This was our second time. But somehow, it’s lost its magic. The original Millennium began in the ’80s in San Francisco at 246 McAllister Street between Hyde and Larkin, in the charming Abigail hotel. It moved to the Hotel California on 580 Geary Street in San Francisco before leaving the city for its current location on 5912 College Ave in Claremont, Oakland. The town of Claremont is friendly and full of character. Was it the softer, more whimsical decor of the first two restaurant locations in San Fransisco that I loved? Or perhaps because The Millennium was the first upscale vegan restaurant I had ever been to? Or was it both? The current restaurant’s menu items are creative but the industrial decor leaves me with a bit of a chill. Watch our interview with Chef Eric Tucker which we made some years ago at The Millennium Restaurant in San Francisco HERE. 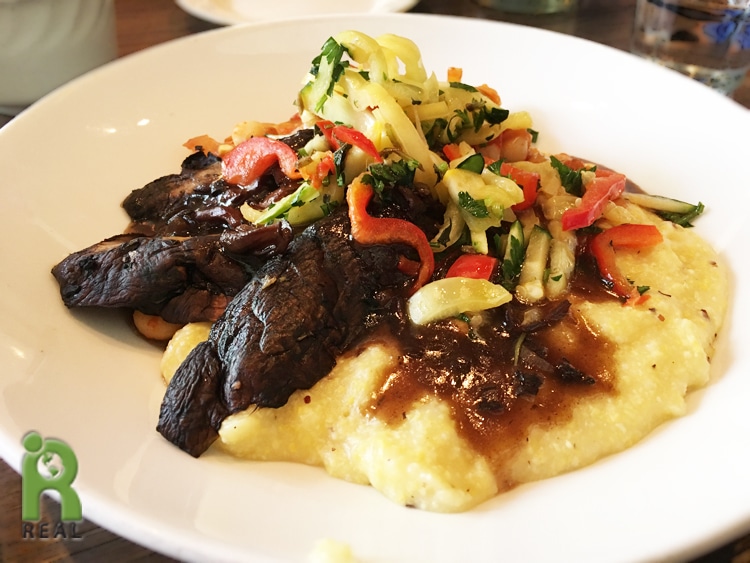 Dinner: After lunch we drove to San Jose to visit with Gary’s family. First stop was cousin Nancy’s house and she loaded us up with fresh fruit from her trees and veggies from the Garden. Then we stopped to see Gary’s dad who will turn 92 tomorrow. Then we went to Gary’s sister and brother-in-law’s home, Deb & Al and the four of us had dinner at Khanh’s. It’s a tradition! We started with the Tofu Rolls. 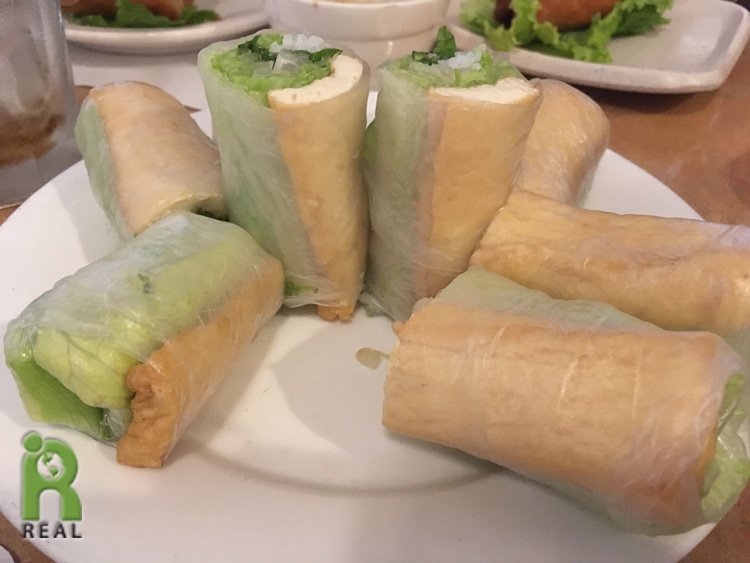 Gary ordered his Rice Vermicelli dish, which he could not finish and I had the Lemongrass Tofu with Brown Rice. 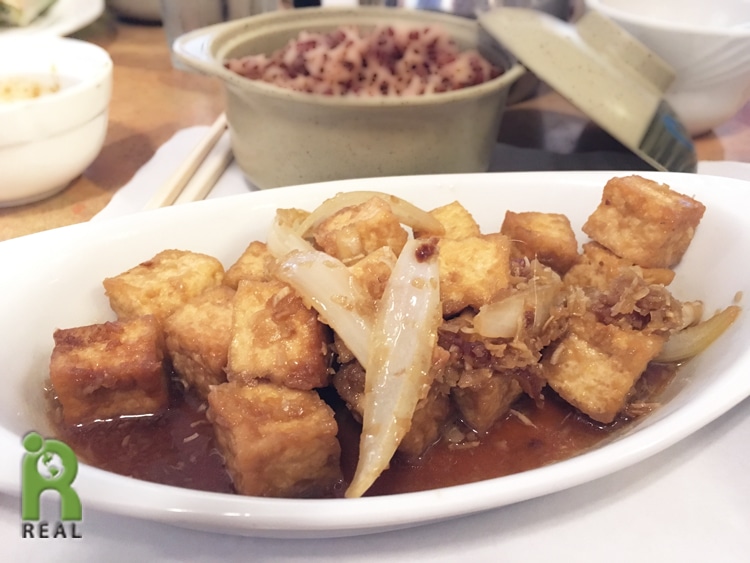