We’ve got a lot of plans for today. Still full from yesterday’s dinner, we walked a few steps from our hotel to Le Cours Mirabeau for a classic moment, sitting at an outdoor table at a cafe, positioned to watch the passersby. 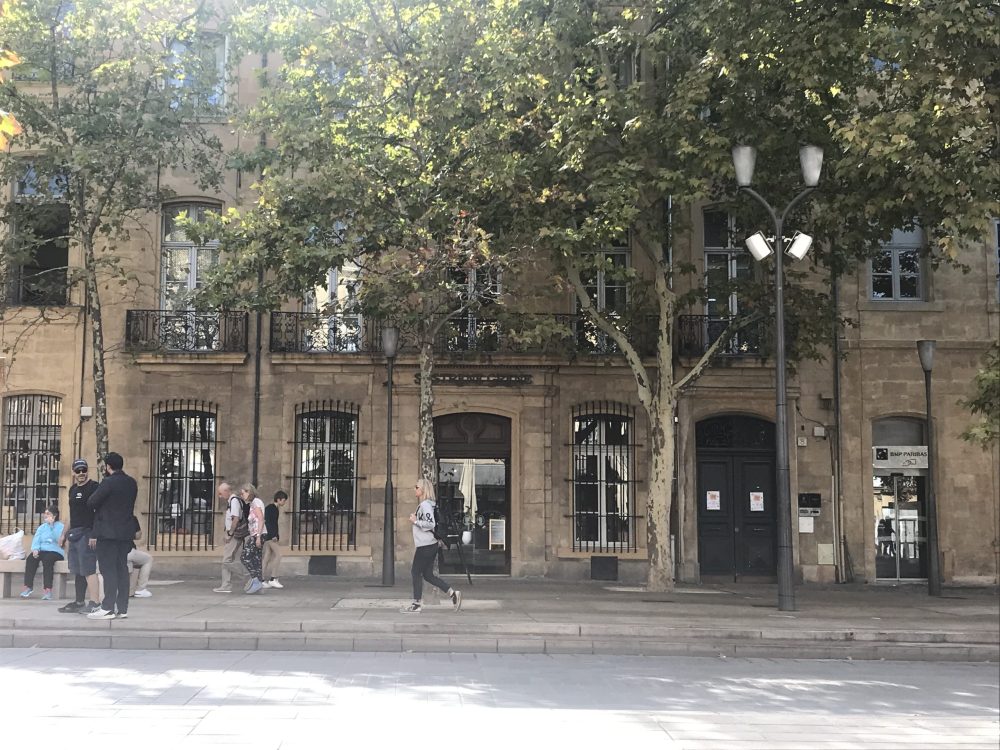 We had tea. Gary is so French. 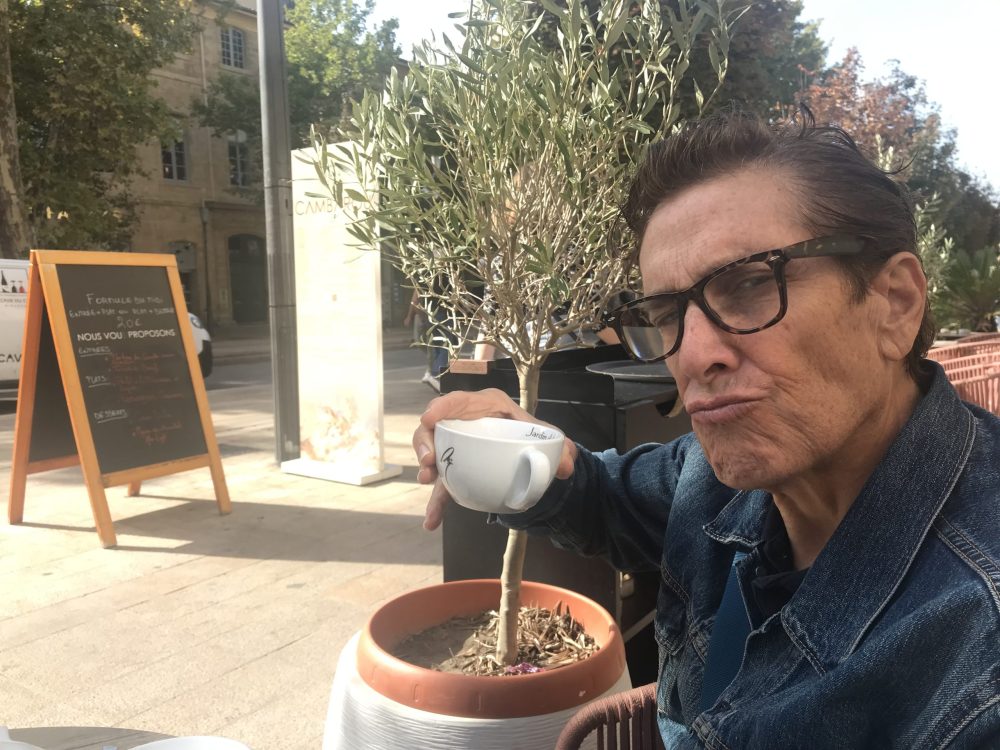 Next up on the itinerary today is laundry. There was a nearby laverie that had reasonable prices. We walked up La Rue de la Couronne. 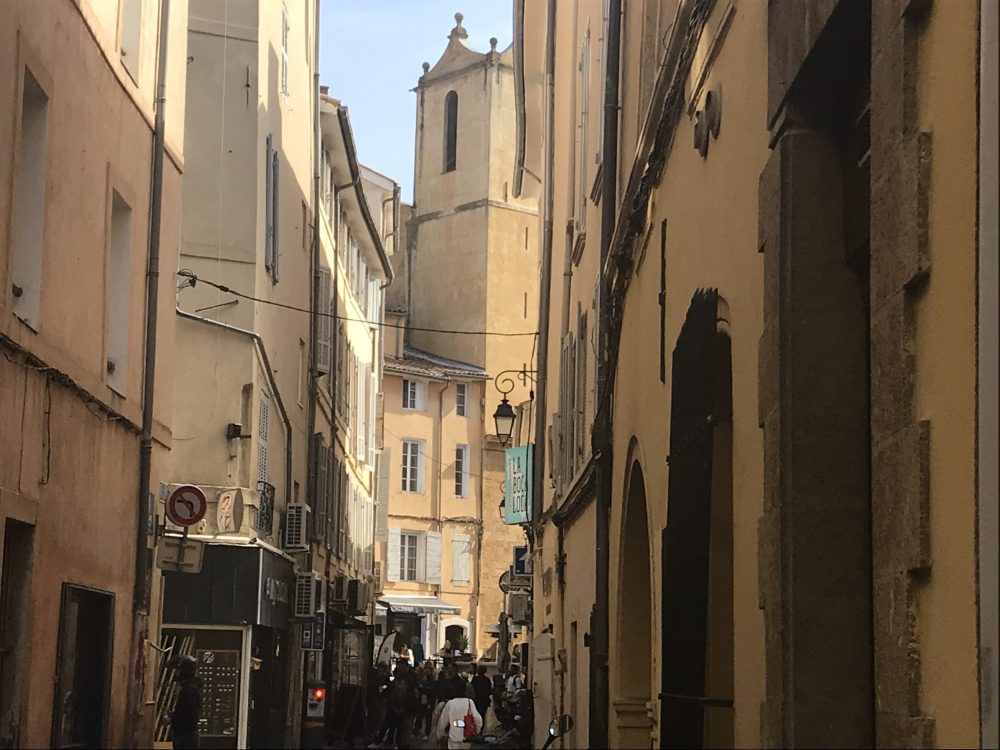 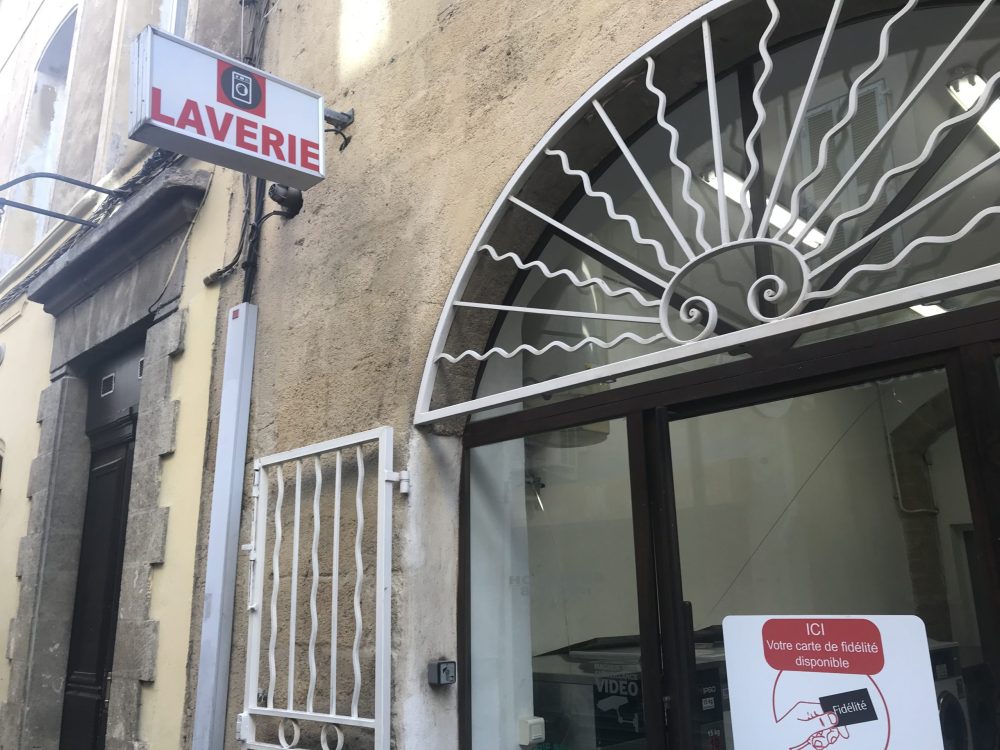 It was fun figuring out how the machines worked with credit cards. 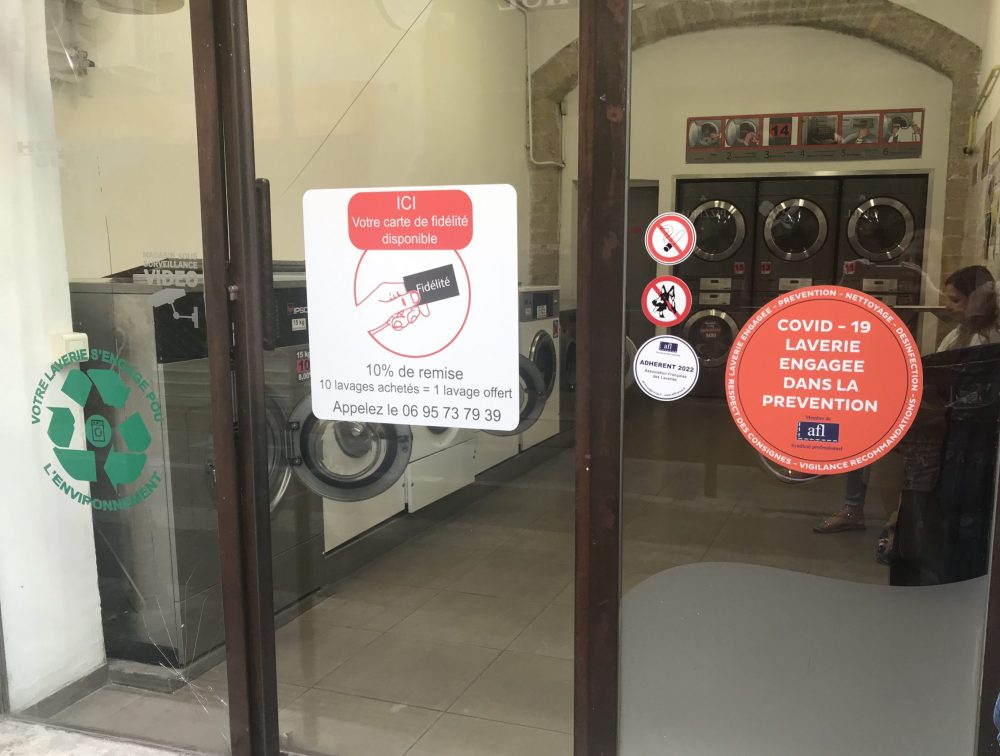 After waiting a bit for the laundry to be washed and dried and put away in our hotel, we were excited to go to Le Pain Quotidien. It was time for lunch! They had organic Cider which called to me. 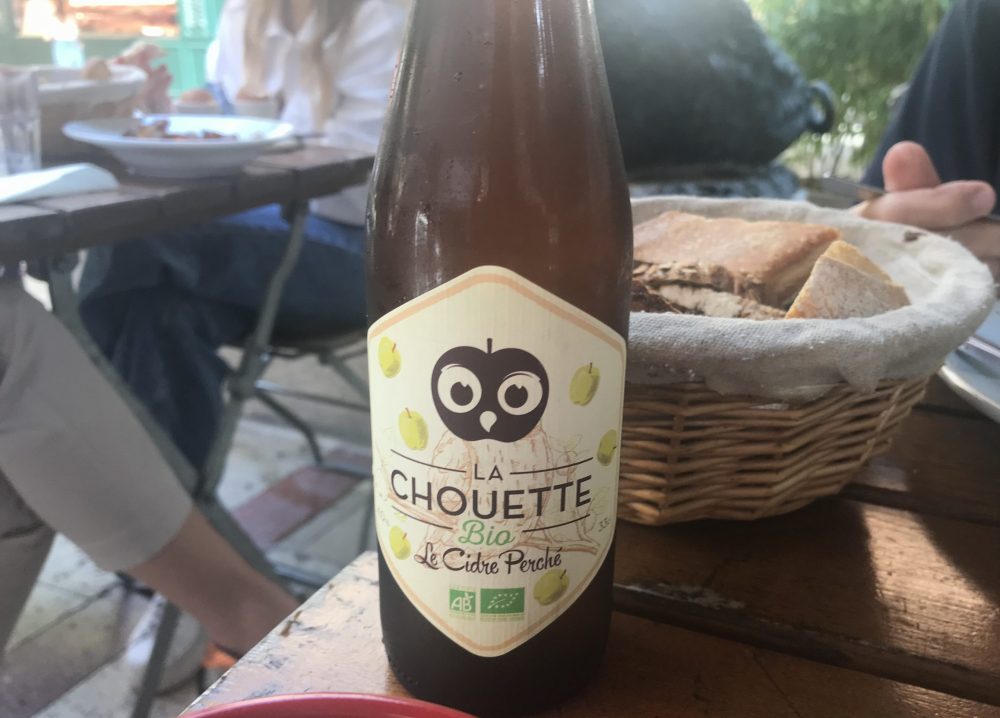 Gary had the Avocado Toast served on organic bread with a green salad. 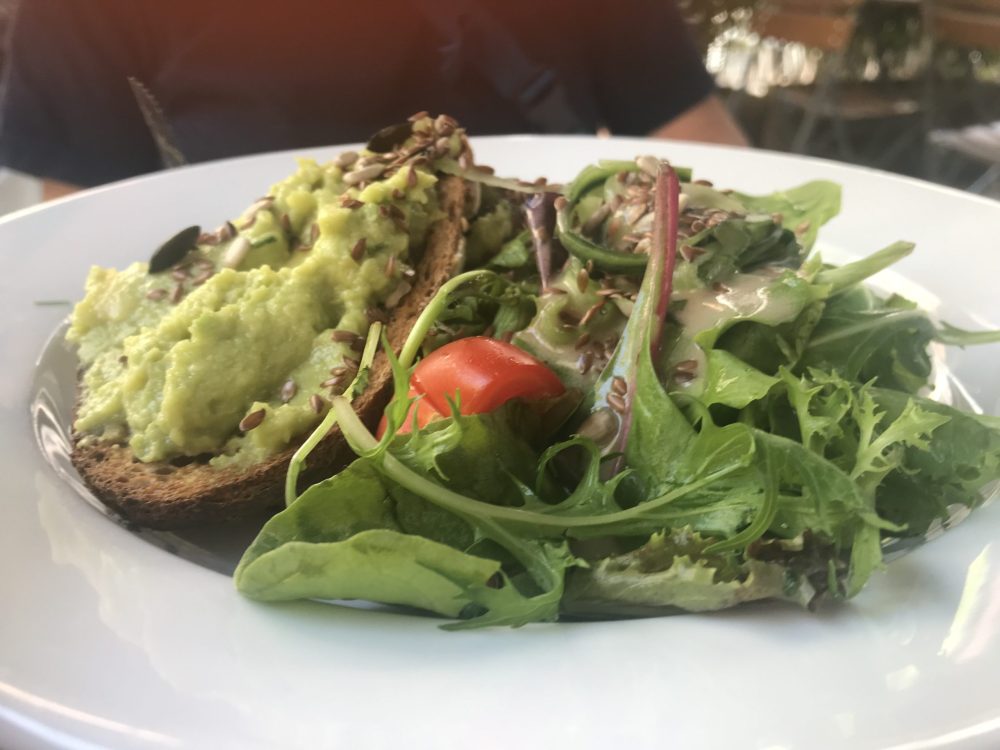 I chose the Pot au Feu served with organic vegetables and quinoa. 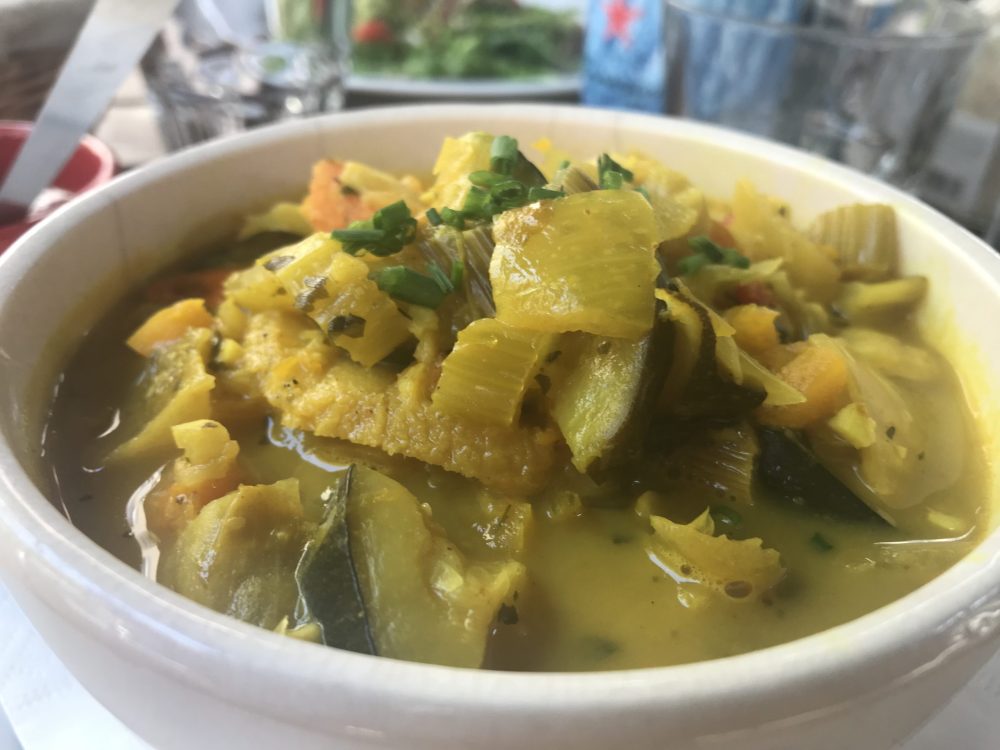 I was still feeling a bit hungry and just wanting to indulge a bit more. I got the Dragon Chia Bowl with dragon fruit, bananas, other fresh fruit, and dark chocolate chips. 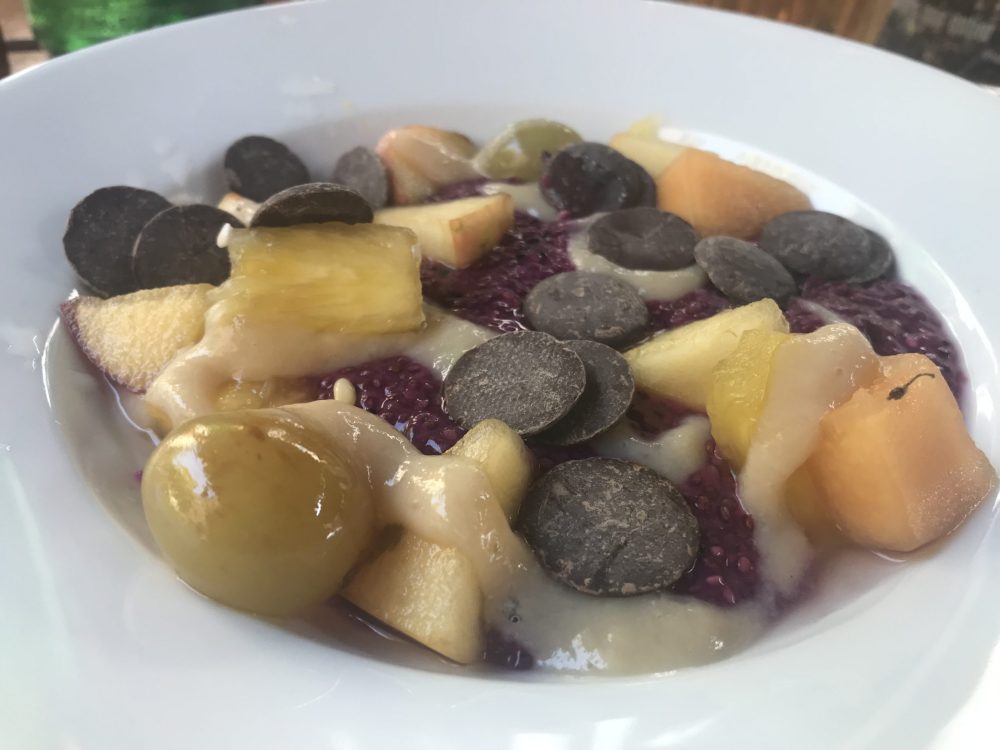 We had plans to meet to meet Josée at 4pm for a walk in the countryside and then dinner with friends at 7:30pm. Now was our time to just stroll and enjoy this beautiful spot. There are guys like these holding up the place all around the city! 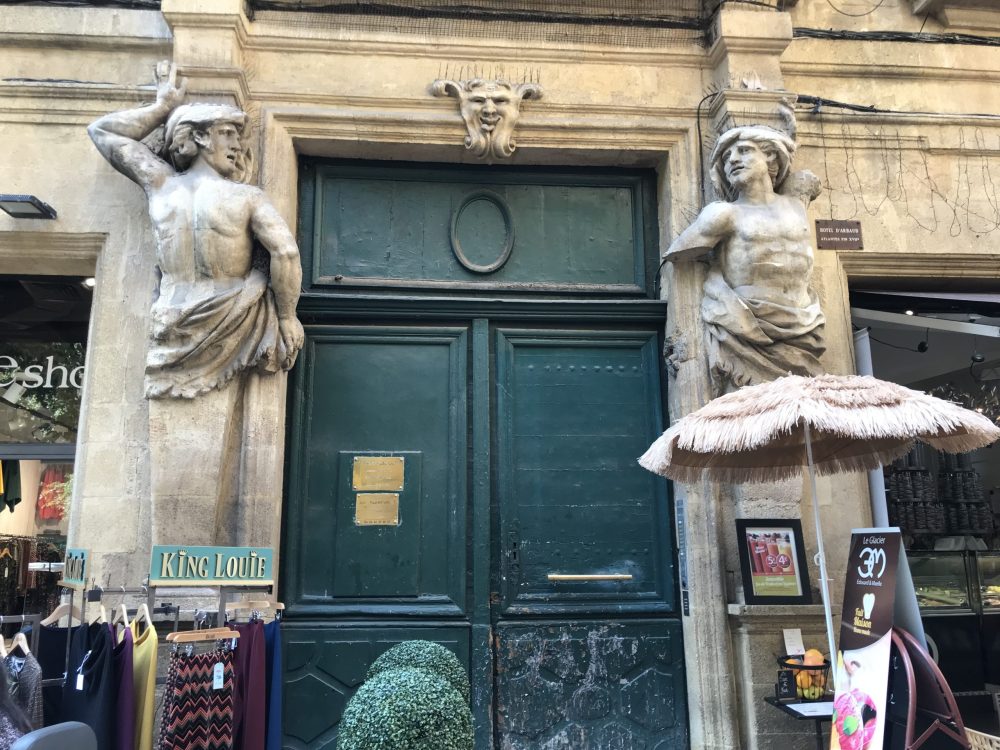 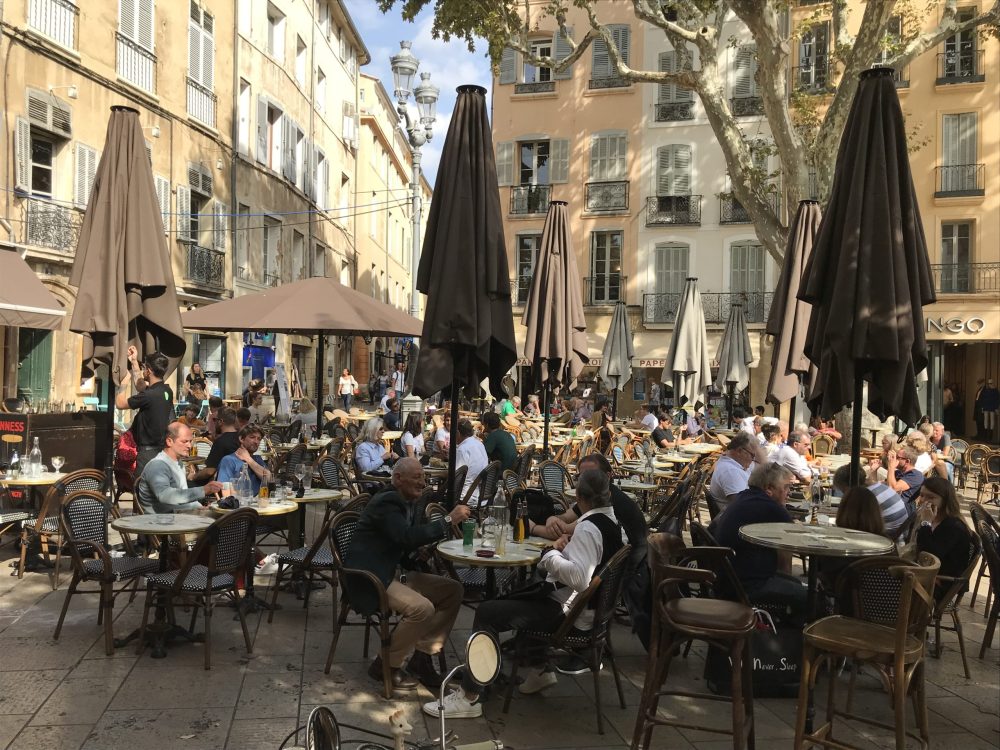 We stopped by the Musée du Vieil Aix, the museum of old Aix and decided to check it out. It is housed in an old mansion from the 17th century which was donated to the city of Aix in 1933. Here you can see the Modello which is a model designed by an Italian artist Giovanni Battista Gaulli, known as “the Baciccio”. This three-dimensional model of an ambitious project for the dome of the atrium of the baptistery of Saint Peter in Rome that was never realized and, after many adventures, arrived at the museum where it was restored and then presented to the public. 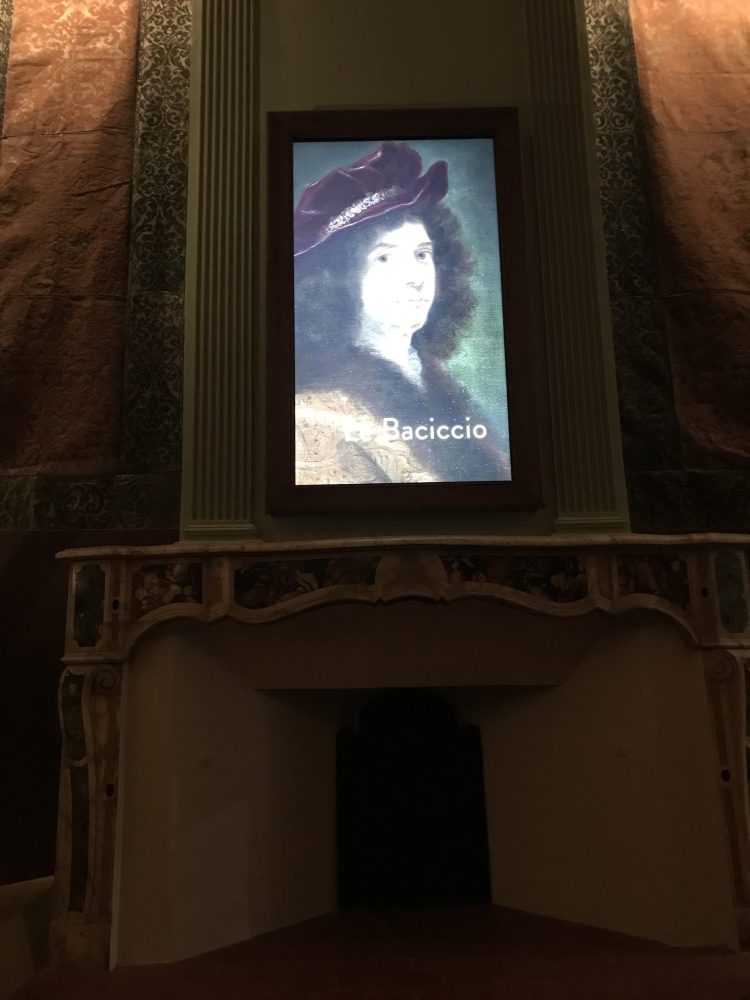 Later we walked to Josée’s home and she took us on a short drive outside the city to an area that Cezanne frequented to paint. We had a bit of a challenge parking the car. There were no available spots but Josée could see some in an area that was roped off. There was a guard who told us we couldn’t drive over there. Nothing stops Josée! She spoke with the guard asking if we could just drive through and turn around. He let us in and she parked the car! We walked the path for a while, smelling the fragrant air and we noticed that all of the cars were there because of a film being shot in this historic and idyllic setting. 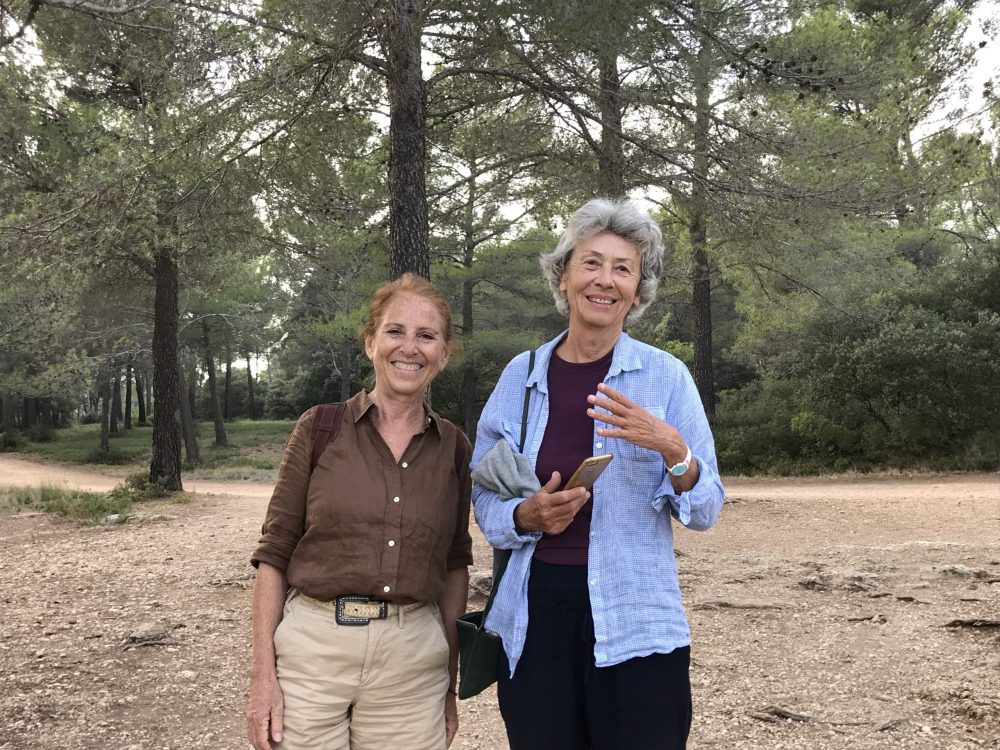 We were in the Parc de Roques-Hautes⁩. 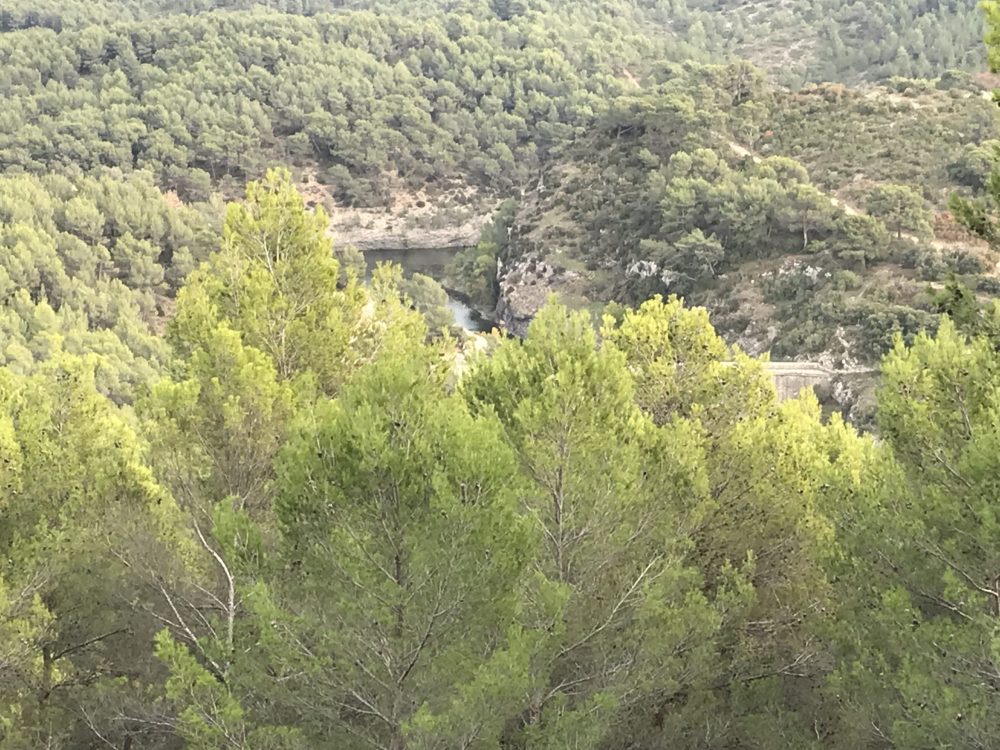 Then we saw it, the Sainte-Victoire, the famous mountain often painted by Cezanne. I have climbed it a few times. It is stunning to see, at different times of the day and during the seasons. The colors are always changing. 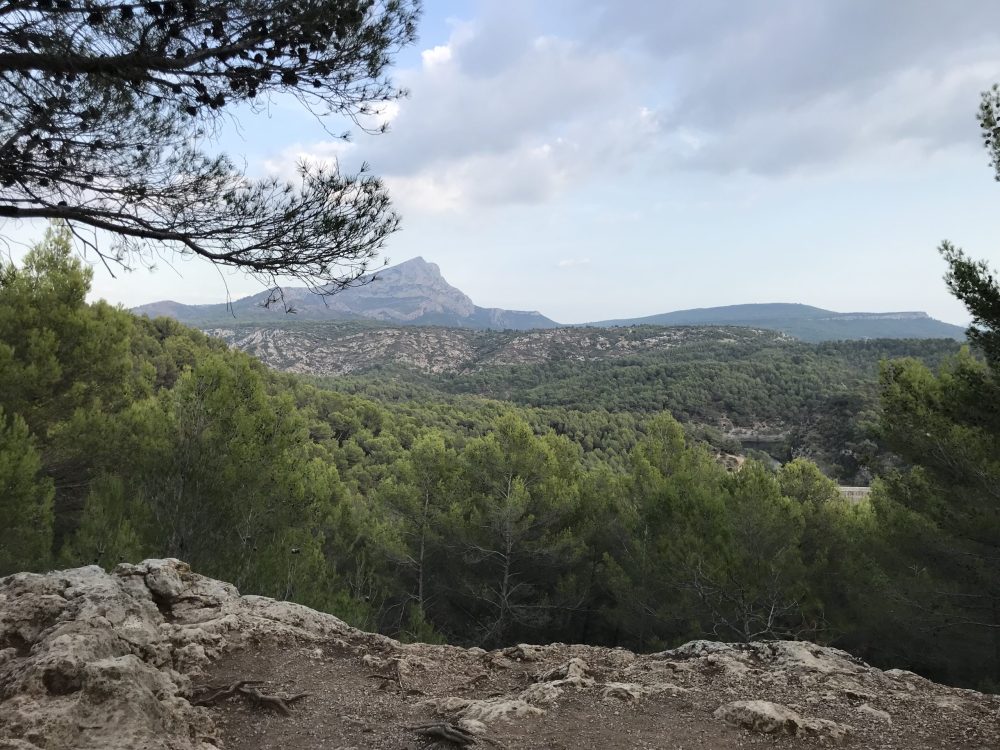 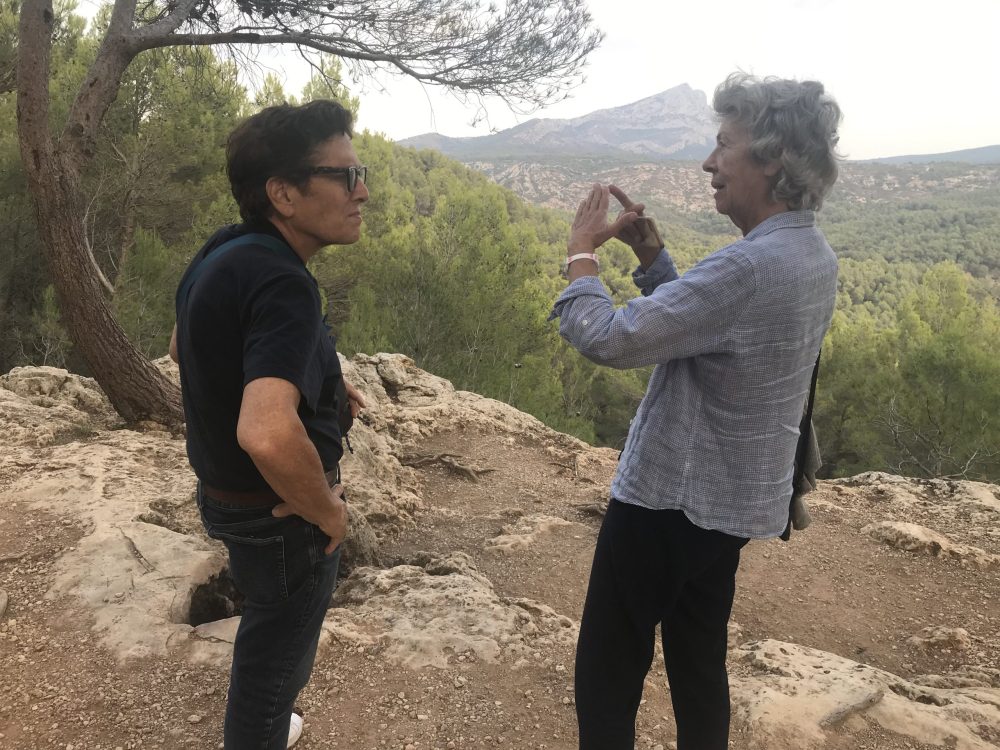 And now a bit closer. 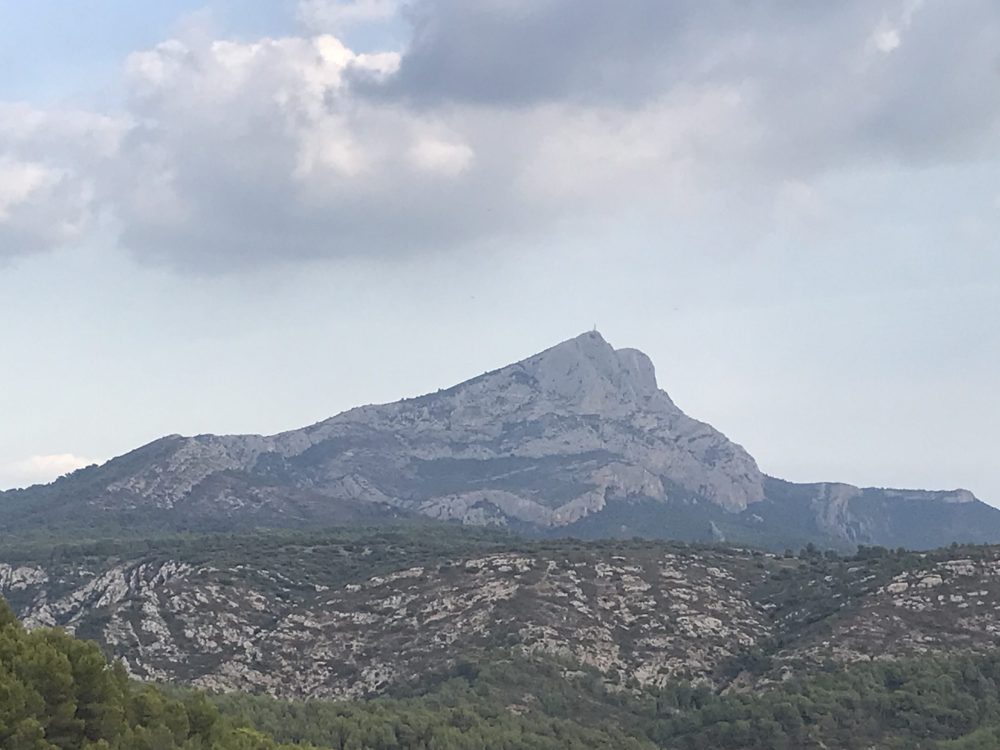 We said our goodbyes for the day to Josée, and got back to the hotel to get ready for dinner. We would be meeting Lucie and Pierre-Luc. We were going to go to their home for dinner but I realized once again we could not get there with a bus or train and we were in no mood to rent another expensive car. They agreed to meet us in Aix. Lucie was the Management Assistant in the office here in Aix-en-Provence for the California company I consulted with back in the 90s. She was always on top of everything back then. And she did not disappoint. She had made a reservation at Le Cabane en Ville, the vegan restaurant we had tried to get in yesterday. She succeeded in reserving a table for us. I was very touched that she found a vegan place for Gary and me.

We arrived. I was excited! 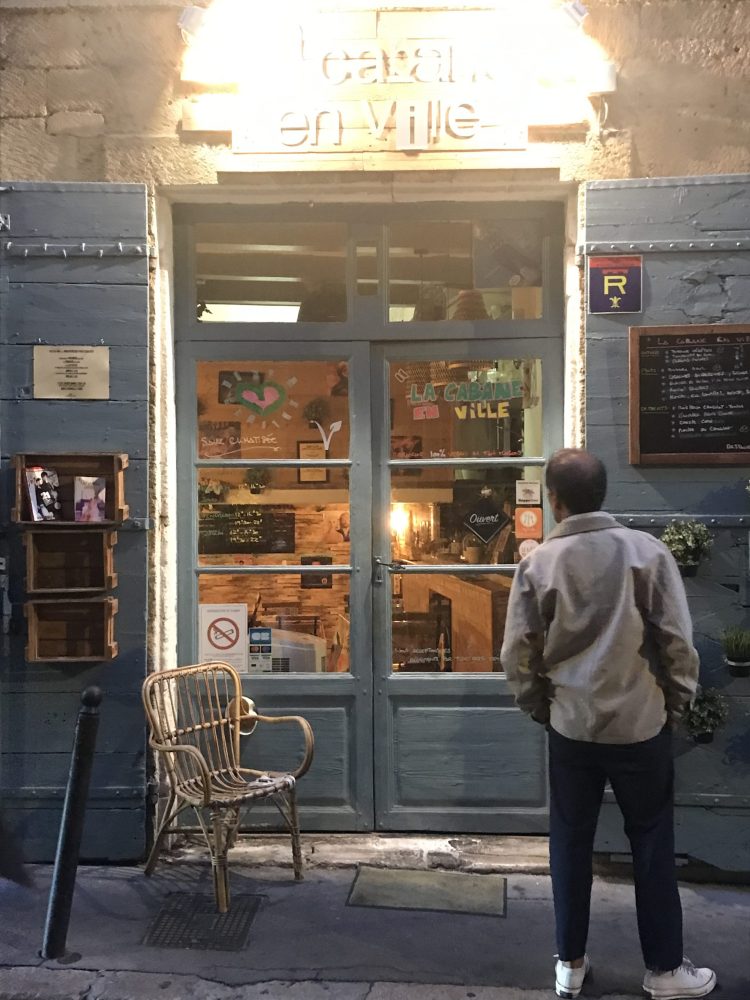 Just a little about this restaurant. It seats about 25. There is only one seating for lunch and then for dinner. The owner does everything. EVERYTHING! He cooks, serves and cleans up. It is a marvel.

The menu was written on a chalk board. It changes all the time. 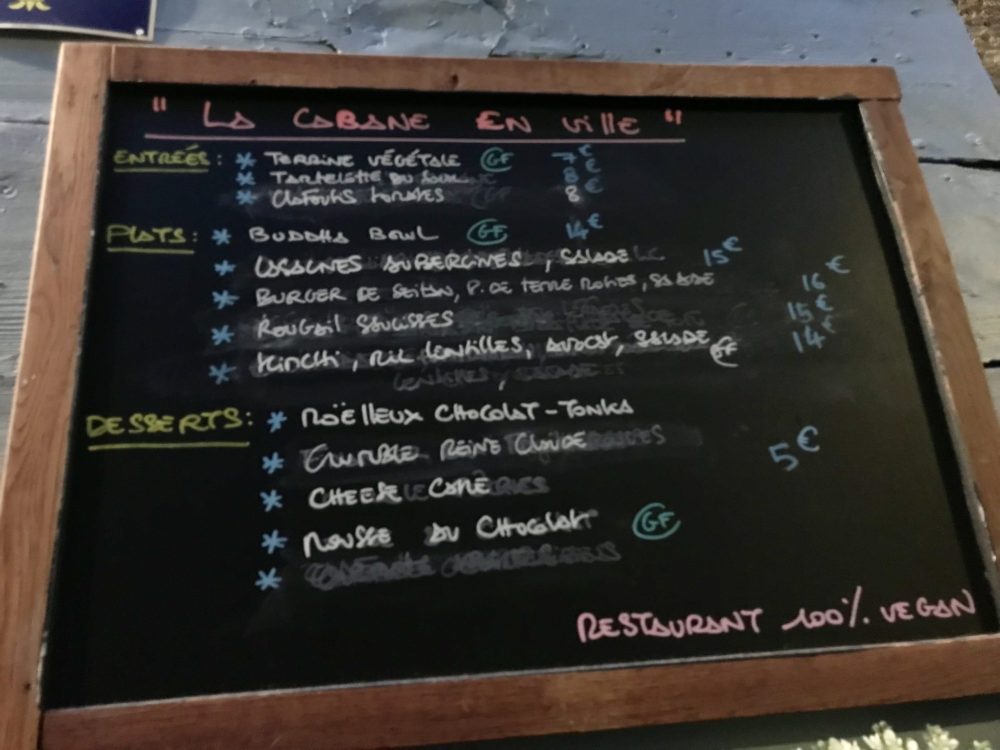 I started with a Vegetable Tart. 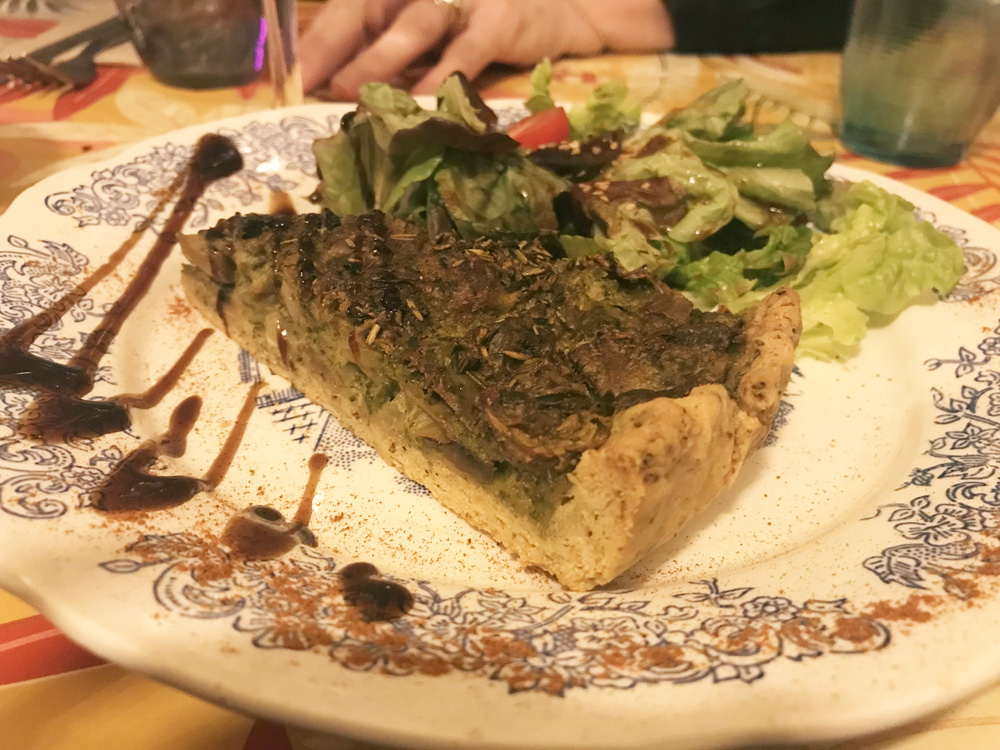 Lucie and I both chose the Eggplant Lasagne. It was very good. 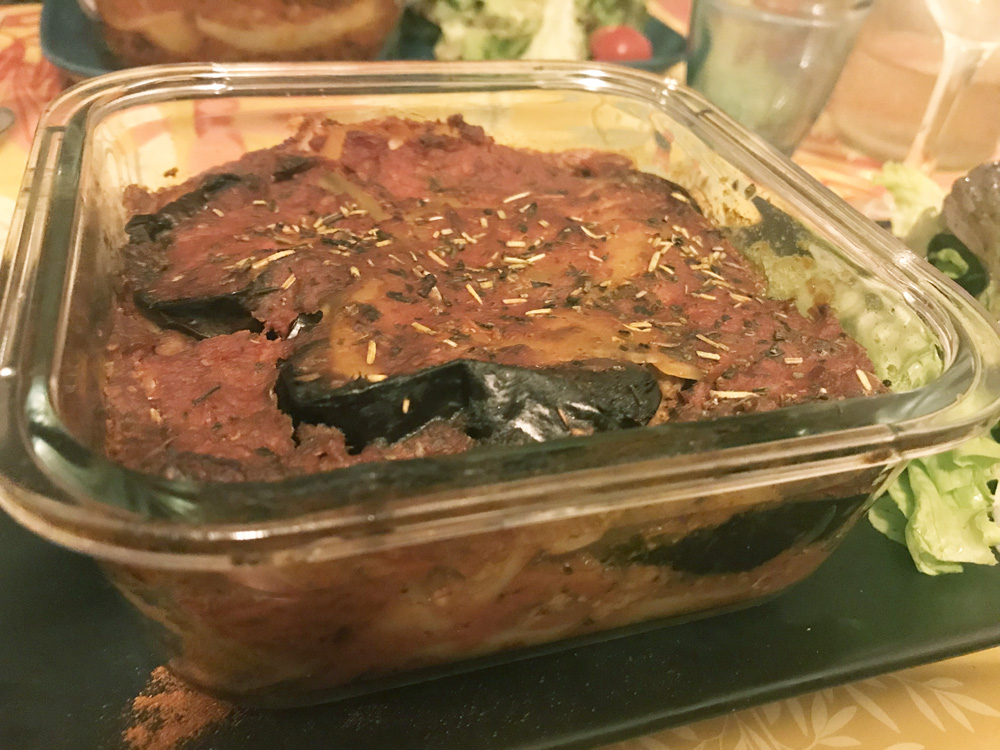 Gary started with the Vegetable Terrine. 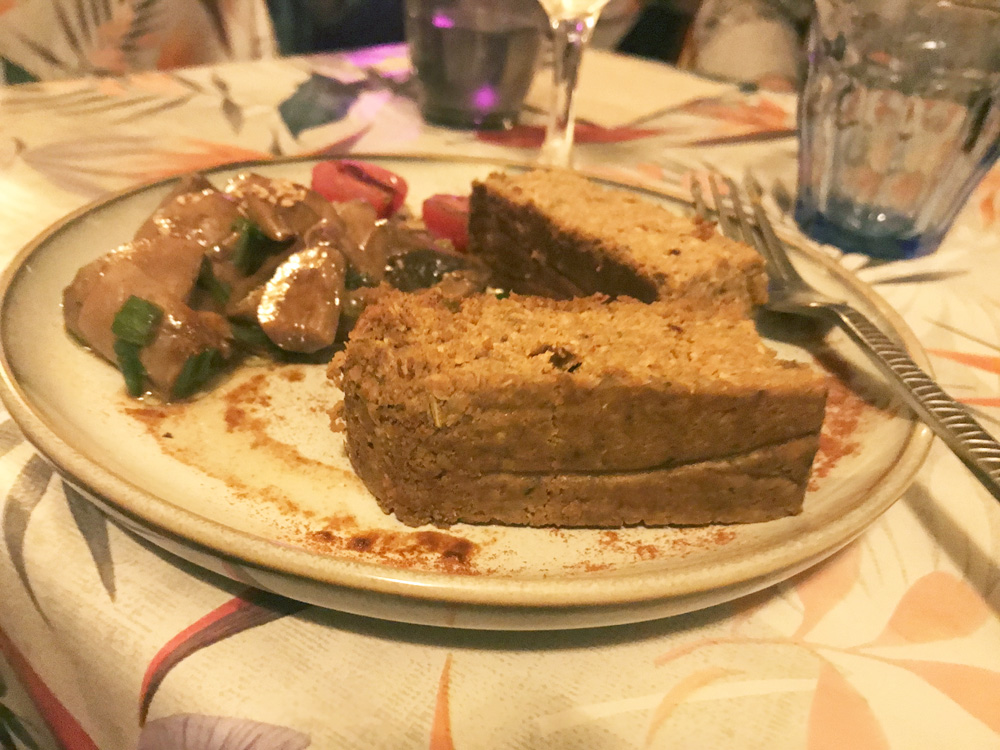 And then he had the Sausage dish with red peppers and pasta. 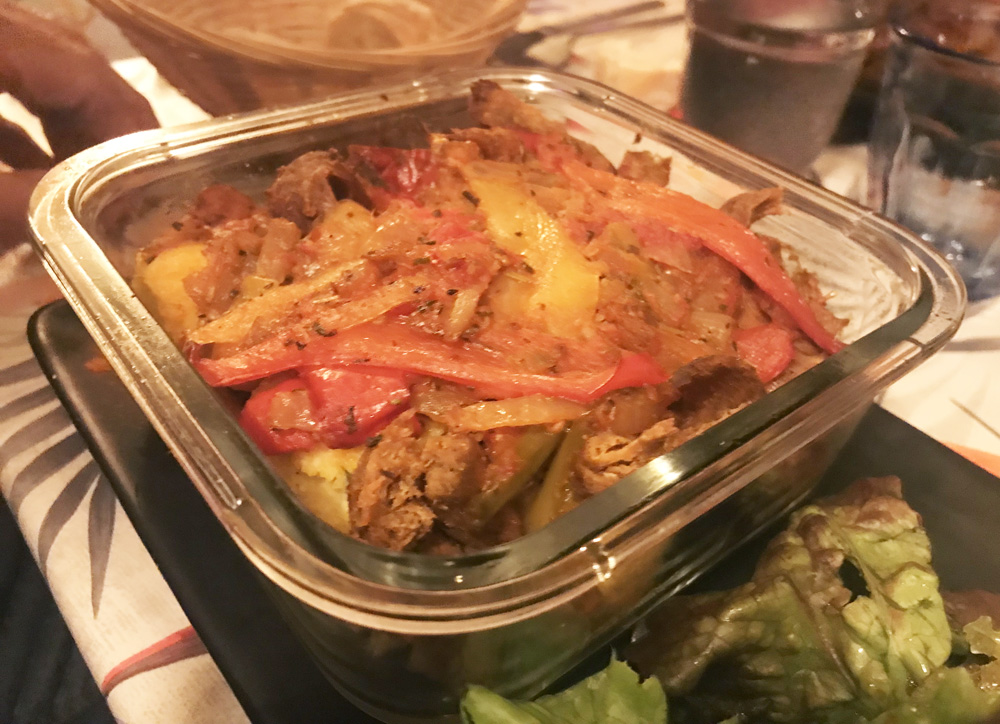 Lucie and Pierre-Luc chose the Chocolate Mousse for desert. 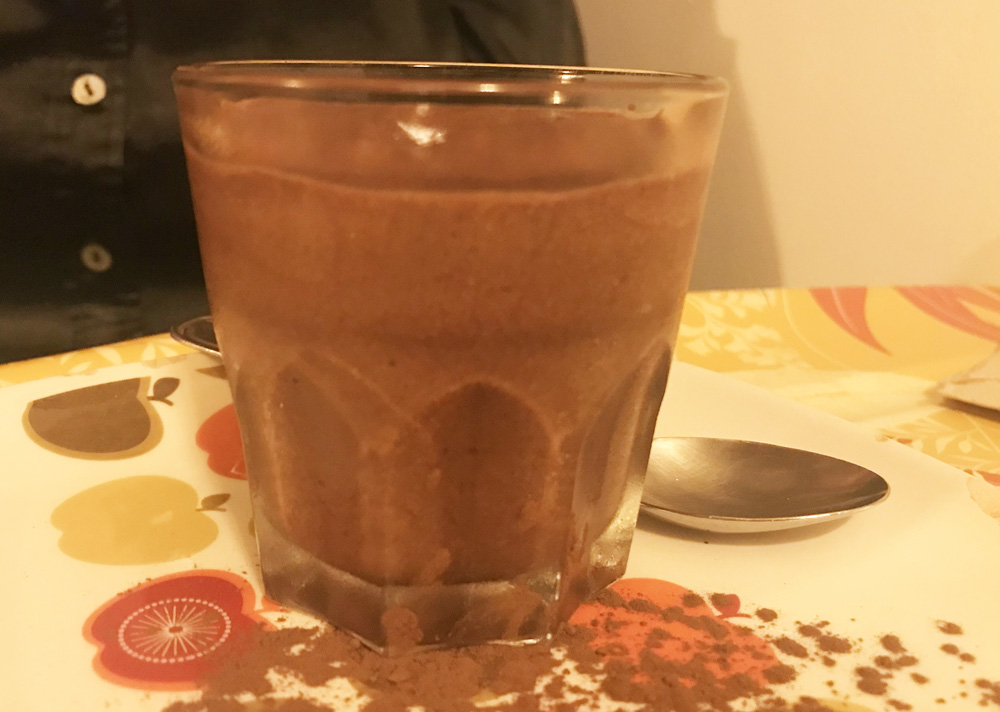 I had the Chocolate Cake made with Tonka Beans. What are tonka beans? I didn’t know, I had to look it up! Tonka beans are a rather exotic ingredient that look similar to raisins in texture. They are actually seeds from a type of flowering tree found in South America and can be used as a substitute for vanilla with their own vanilla-like flavor with fruity, spicy notes. 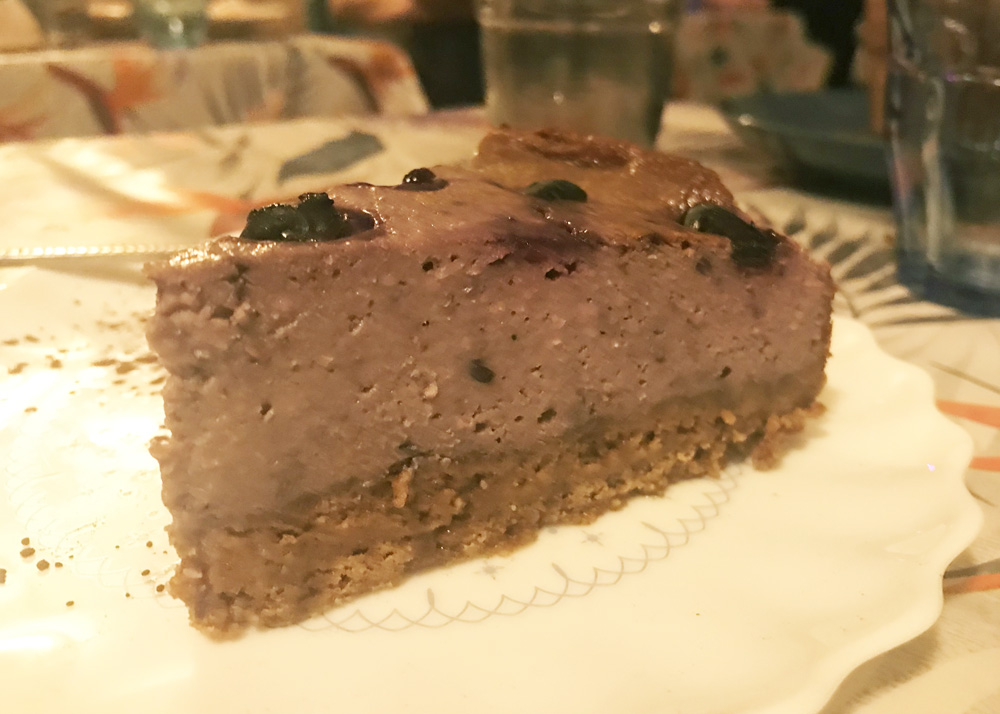 Gary had the Cheesecake. 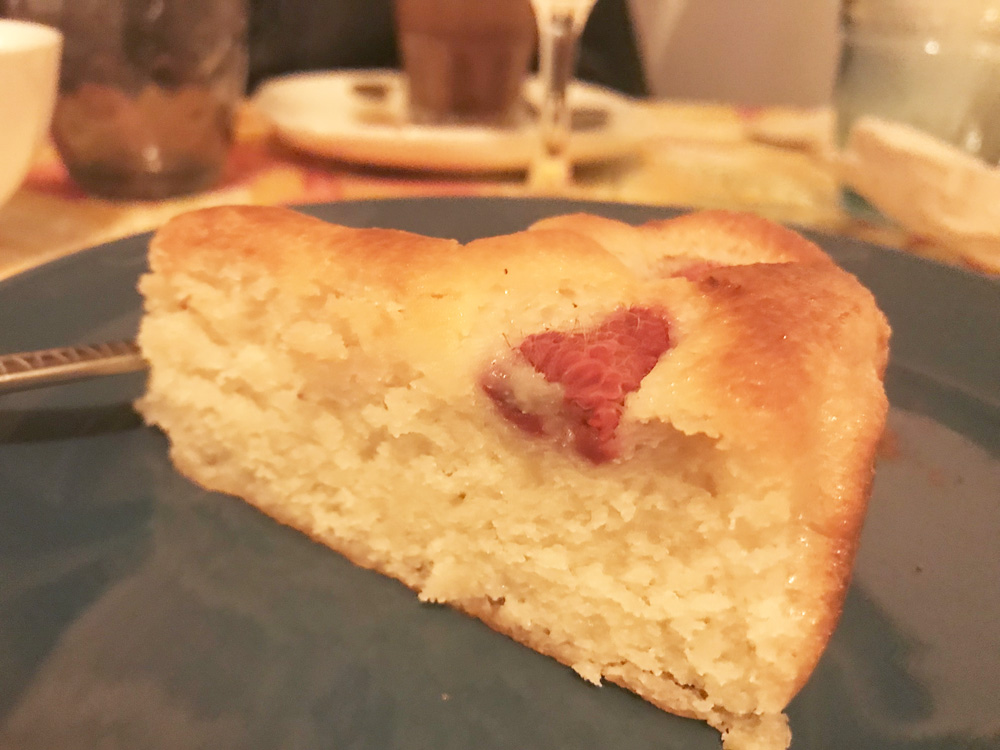 This was a happy time for me, surrounded by good friends and yummy food. 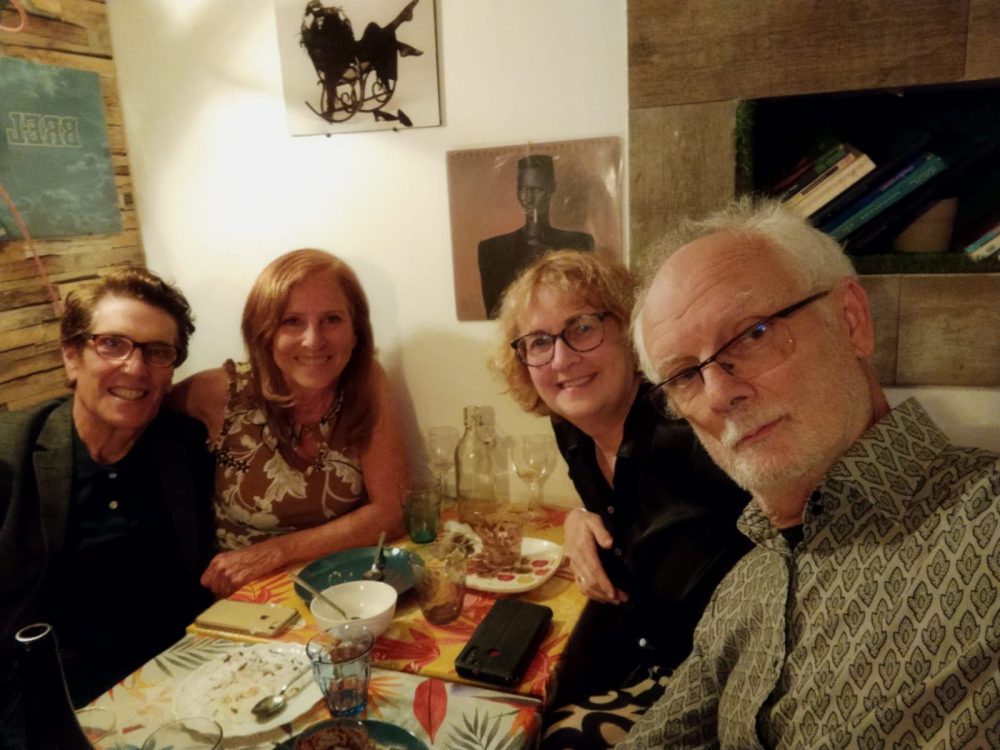 How to become vegan in a few seconds.

Rule 1
You must have the courage to open your eyes.

Rule 2
You must have the courage to understand what you see.

Rule 3
You must have the courage to act on what you understand. 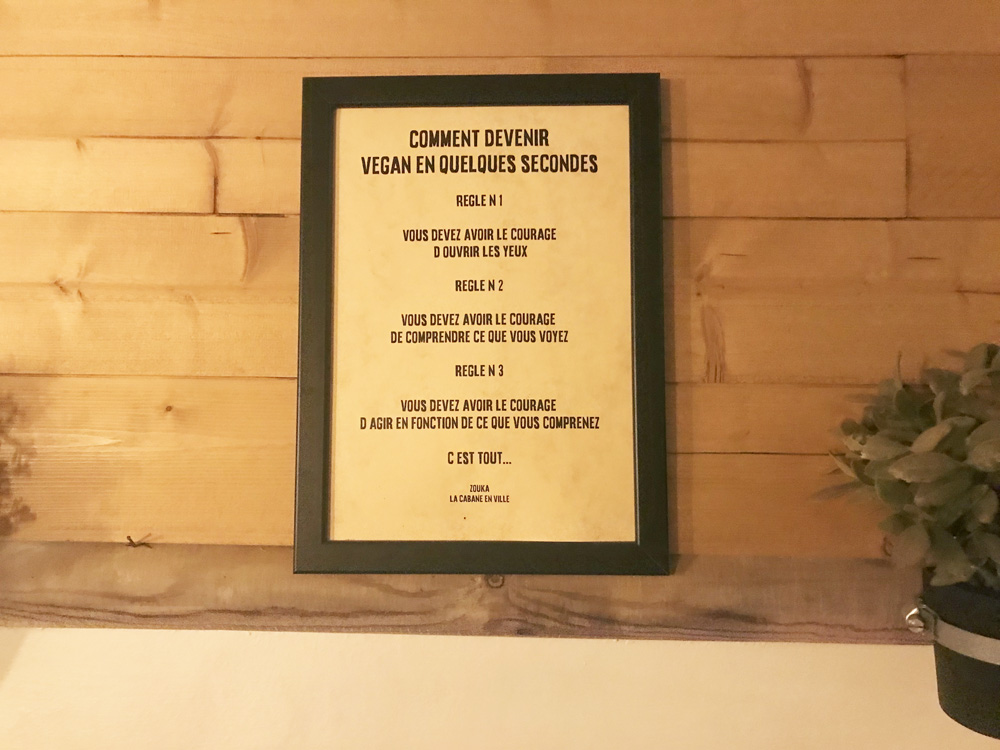 Me and the amazing chef, Zouka.

After a long and lovely meal, we decided to walk a bit through the centre ville. Lucie and Pierre-Luc had told us that since the pandemic-related shut downs, the night life in Aix has come alive, with crowds of your people in the town squares. We had to see it to believe it so we walked back to where I knew the farmers’ market takes place on some of the mornings. I saw it and I still can’t believe it! The crowd was enormous. It was almost impossible to walk through it. It was nuts. This was the place to be! But not for me. I preferred the stately, serene Aix. But these old buildings and walls can take it. They have seen everything.