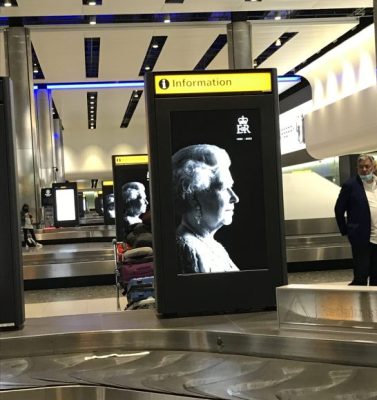 We left New York’s JFK terminal on JetBlue at about 6pm EDT (Eastern Daylight Time) for London. The flight was pleasant enough. We splurged on Extra Space seats. We arrived on September 17, at 6:30am BST, (British Summer Time). I had not been in the Healthrow airport in decades and it had changed so much for the better. Early in the morning it was empty, clean, bright and quiet. We breezed through customs and baggage claim.

We had decided once in Europe to travel by train using the Eurail Pass. I had enjoyed the Eurail Pass in the 90s, but just like everything else, it has changed from a paper ticket to mobile passes on our phones. I had read a bunch of blog posts to prepare before we arrived. But for some reason I didn’t review Eurail’s simple instructions! It took a while but finally we got our barcodes up to show the attendant at the Healthrow train terminal turnstiles and we were on our way. 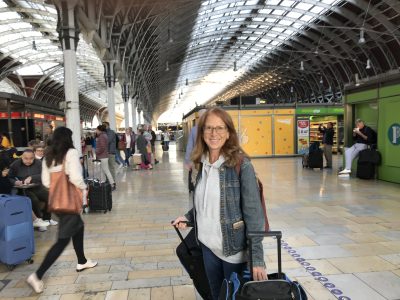 We rode on the Elizabeth Line to Paddington Station and arrived at our hotel on the north side of Hyde Park by about 8:30am. Of course it was too early to check in so we checked our luggage and ventured out.

Unlike many others arriving in London at this time, we were not there to view Queen Elizabeth’s lying-in-state or for her funeral. I thought it would be prudent to make all of our restaurant reservations in advance thinking they might all be full with all the visitors in town for the royal pomp.

Forgive me as I mention numerous times while blogging about this trip, I lived in France in the early 90s and traveled all over Europe. I never met another vegan, and rarely met vegetarians. There were no vegan restaurants and a few vegetarian restaurants whose cuisine had barely evolved. One of my last visits to London was in the late 90s. Thanks to Mad Cow Disease, many of the pubs were offering vegan options. Outside of this there weren’t many options.

Gary and I had checked a few blogs but most focused on vegan places that served fast food like burgers and fried food. We were looking for real food, elevated vegan cuisine for the 21st century, that was nourishing, delicious and artful. Happy Cow was the best resource, with details on menus and reviews that made our decision-making easy.

We had a 1:30pm lunch reservation at Mildred’s Soho which was a 45-minute walk from the hotel. We thought we would take our time and walk through Hyde Park a bit and then make our way to SoHo. 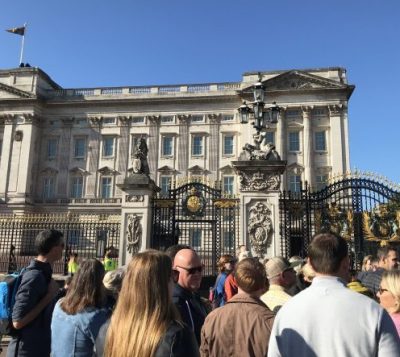 Not paying attention to the directions, we ended up by Buckingham Palace where a queue (not THE Queue) had formed to place flowers in the park. We stayed in the line to view the front of the palace and exited after a bit to continue on our route to SoHo.

We walked over 3 hours! Although I checked my luggage, I had my laptop in my backpack and it got heavy. Fortunately there were plenty of tables when we arrived at Mildred’s at about noon and got seated. 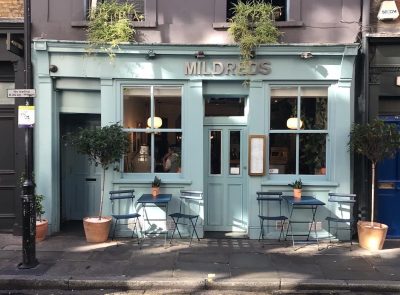 Forgive me again, I was in a fog and forgot to take a photo. Here are the Banana Pancakes, the photo is from the restaurant’s site. 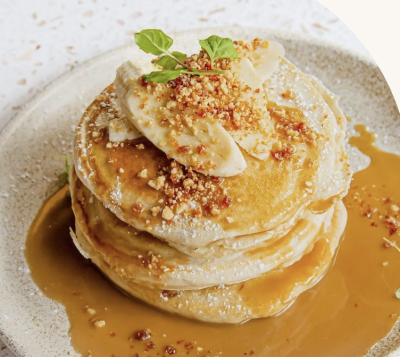 Our first meal of the trip was fabulous. Sufficiently sated, we headed back to the hotel to check in and take a nap.

That evening we had tickets to see Life of Pi on the West End, just a bit east of where we had been for lunch in SoHo. We walked almost an hour to get there. Before the show we walked around Covent Garden and the Jamaica Patty Co. caught our eye. They had vegan patties. 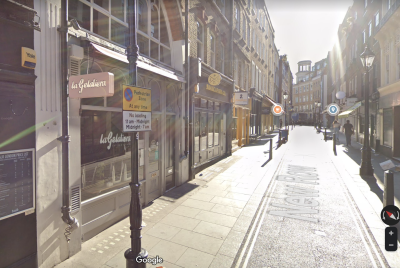 Forget what I wrote about our food requirements above. This food was fast and fried. But it was different, interesting and they boast that everything is freshly baked in their store. We shared the two vegan flavors. It’s not a food I would eat every day but it was fun to try. Just two stores up was La Gelatiera. We had plenty of time before going to the theater around the corner. We peaked in and saw they had vegan flavors. Pistachio? Gary and I each got a scoop. It was the best pistachio ice cream I ever had and it was vegan.

Life of Pi was an unexpected delight. We knew nothing about the play and found it thrilling. The puppetry was out of this world! If you have read the book or seen the movie you know the extraordinary story. It is spectacular on stage, not to be missed! To get a taste you can see some photos and video trailers here.

The 55-minute walk back to the hotel was easy. We were high on theater and great food. The city was alive with energy. We had walked a total of 11.4 miles and were ready to sleep. The first day of the 25-day Magical European Tour exceeded all expectations.