After interviewing Jenny Linford, the editor of the new Kew Gardens Cookbook, I did not want to miss visiting the Royal Botanical Gardens. We planned to go on our second day in London. After arriving early yesterday on a red eye flight we naturally needed to catch up on sleep and slept in later that expected. The gardens were quite a distance away, 2 hours on foot, close to an hour by bus and 45-minutes or so by taxi. I wanted to try the bus. I downloaded the App to our phones that allowed us to use our credit cards via a contactless reader on the bus. We walked to the nearby bus stop and waited. Three buses from the line we wanted to take passed us over a short period of time. They were full. We assumed this was due to all the people visiting London for the Queen’s lying-state-state and funeral. Since it was already the afternoon we decided to skip the gardens for now and head in the opposite direction to Borough Market. We had reservations there that evening for Mallow, a sister restaurant to Mildred’s.

Walking along Bayswater Rd which becomes Hyde Park Place, we thought we’d try to get a bus going east toward SoHo and ultimately Borough Market. One stopped for us and we tried to use our apps. They didn’t work. It was embarrassing but the driver let us on anyway. Unfortunately, we weren’t on the bus for long. There was so much funeral-related traffic the bus was rerouting and we hopped off. 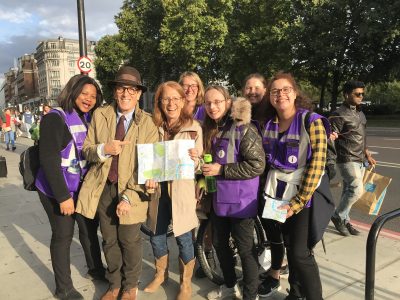 There was a group of Londoners on the corner in purple vests, each with a giant white letter “i”. They were there to help people like us so we stopped to asked for help to get to Borough Market. They all agreed it was too far to walk. They didn’t know who they were talking to. We are walkers! We told them our apps didn’t work on the bus. They looked at our phones but didn’t have anything to suggest. One offered to help us take the subway. Another gave us a paper map. A PAPER MAP! Who uses paper maps anymore? I was thrilled to have it. They told us since it was Sunday, all the stalls at Borough Market would be closed. We decided we head there anyway since we wanted to go to the restaurant there. When we said we wanted to walk, a few of them suggested we walk along the north side of the Thames, not the south side, since the Queue would be there. The Queue! We heard about it but we hadn’t seen it. We did as they said and had a lovely stroll along the Thames. 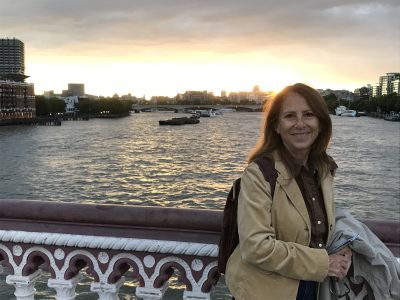 We were blown away seeing the never-ending Queue of people on the other side, waiting to view the Queen’s casket.

It was getting dark when we finally made it to Borough Market. 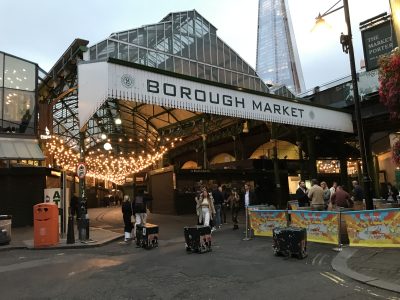 We had been in London for less than two days and felt like we had been here a long time. The United States was very far from our minds. We were already weary travelers, hungry and ready to sit and be served. 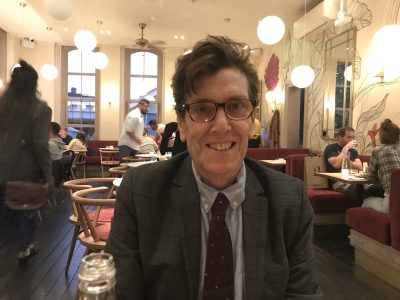 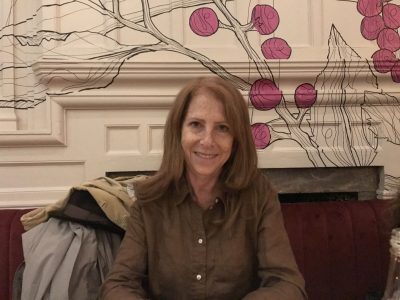 We started with Kimchi Dumplings with a gochujang dip and Asparagus Broccoli Summer Rolls with Raspberry Nuoc Cham (dipping sauce). They were gone in an instant. Hungry vegans.

Yes, we had room for dessert! Crème Brûlée with Anise Apricots and Pistachio Biscuit Crumbs for Gary and the Praline Blackberry Mille-Feuille for me. 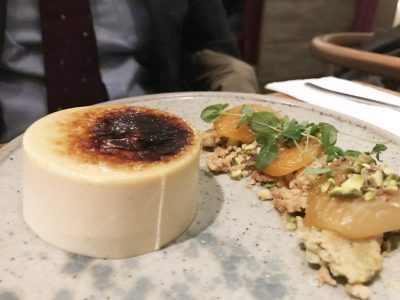 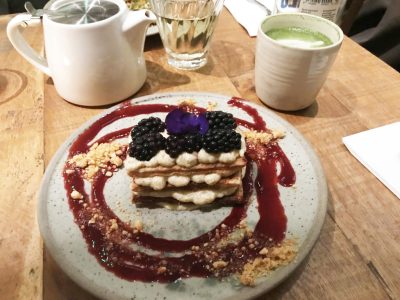 It was so thrilling to be in London that I forget to photograph the food the first two days but Gary snapped these two pics of our dessert. I woke up on the third day and remembered to take photos, which will be shown in subsequent blog posts. You can see some of the incredible food here at Mallow’s on their Instagram Page. 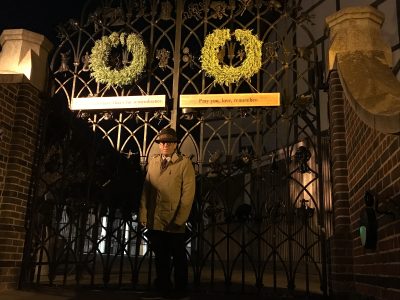 For a brief moment we considered taking a taxi back to the hotel but I convinced Gary we had much more to see. To start with Shakespeare’s Globe Theatre was nearby in the direction of our return. Gary was happy to be there.

And the Queue kept going in both directions! 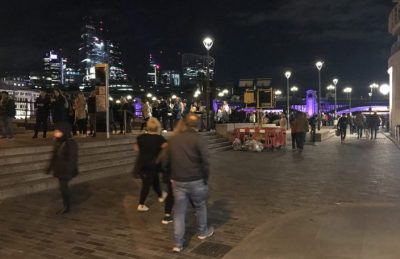 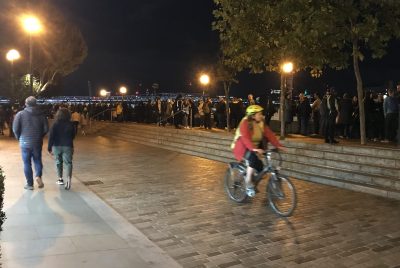 Back at our hotel, ready to rest, day two of our 25-Day Magical European Tour was complete.