It’s Day 3 of our 25-Day Magical European Tour and finally, I have some food photos to share.

September 19th was the day of Queen Elizabeth’s funeral. We did not plan to be in London during this time, nor did we plan to stay in a hotel so near Buckingham Palace and Westminster Abbey. We were staying on the north side of Hyde Park in the City of Westminster and all the action was southeast of the park.

We wanted to sleep in a bit but the sounds of hovering helicopters made it difficult. Today we would be meeting my friend Trevor. Trevor and I performed together in Man of La Mancha at Cabrillo Stage in California years back. Then Trevor moved to New York and worked at Candle 79. It was fun to see him in one of our favorite places in NYC. Trevor moved around a bit and is now studying International Wine Business in Brighton. I was grateful that he would brave the public transportation system on this historic day to come and meet us at Wulf & Lamb in the Marylebone section of London. I chose this location because it was north of the park, away from where all the funeral activity would be.

We started with proper cups of good English tea! 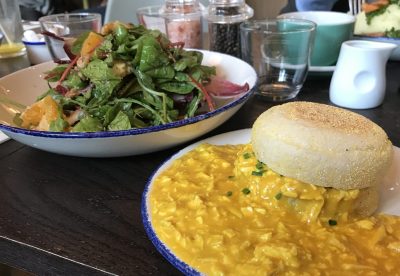 Trevor and I both ordered the Scrambled Muffin which was described as being made with smoked tofu, plant-based cheese sauce and chives. I was craving a salad and was grateful to see one on the menu. The Scrambled Muffin was not what I expected. I was hoping for a classic tofu scramble with a little of the cheese sauce drizzled on top. It was heavy and I did not love the sauce. There was so much of it!

My salad was perfect, light and fresh, topped with clementines. 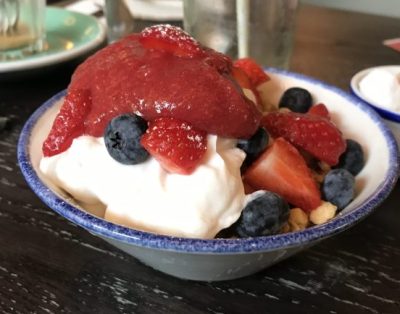 Trevor also ordered the Granola, a bowl with creamy coconut yoghurt served with granola, raspberry compote, raspberries and blueberries. That looked good. I’ll keep that in mind for next time.

I’ll admit that Gary and I were a bit stuffed from our dinner the night before so that probably affected our opinion of the food. 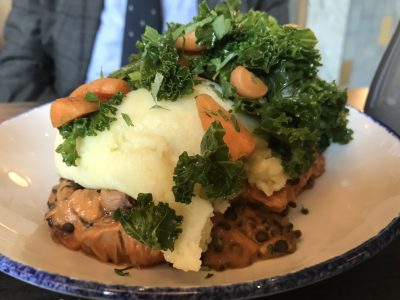 Gary did not make a good choice for himself that morning. He ordered a Shepherd’s Pie with mashed potatoes, jack fruit, kale, and a cheesy sauce. It was too savory, rich, and too heavy for him at that moment. He probably should have gone for the pancakes.


And a good time was had by all. 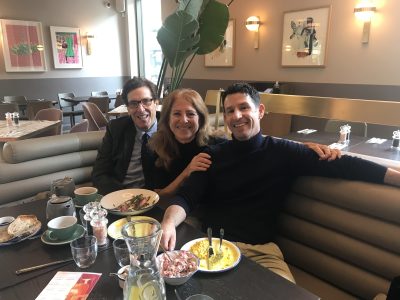 Afterwards Gary and I walked back to our hotel to rest up for our evening adventure. Trevor texted us to tell us his return on the train was difficult. We ended our brunch about the same time the funeral had ended and many people were crowding the subways and trains. Sorry Trevor! 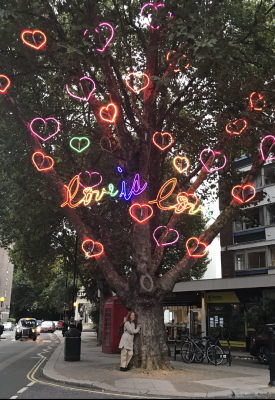 We took it easy in the hotel during the day, not wanting to get caught up in funeral traffic. Our plan was to return to the Marylebone section for dinner at The Gate. On the way to the restaurant we stopped at the Tree of Love. I had to give it a hug!

We also passed by Le Pain Quotidien, a favorite restaurant chain that we frequent in NYC. This restaurant had VEGAN CROISSANTS on the menu. What?? We decided we would come here for breakfast before leaving London tomorrow on the Eurostar for Paris.

According to the website The Gate “was established in 1989 by Michael and Adrian Daniel, brothers with an Indo-Iraqi heritage who wanted to recreate the diverse flavours and culinary experiences they had enjoyed as children, eating food with Arabic, Indian and Jewish influences.” The restaurant serves mostly vegan dishes with some vegetarian dishes containing eggs at brunch. 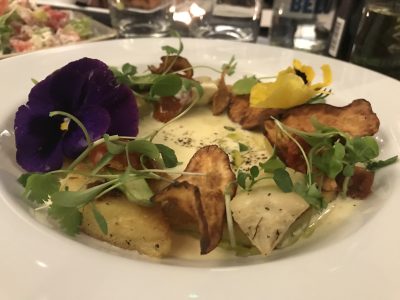 We got to the restaurant early and there was only one other table taken inside. We were greeted warmly and sat in a cozy corner.

I ordered the Gnocchi. It was in a creamy sauce with yummy mushrooms and I loved it. Ooh, I am ready for this dish again. Their menu is seasonal. I may have to watch for their new menus and plan our next London trip accordingly. 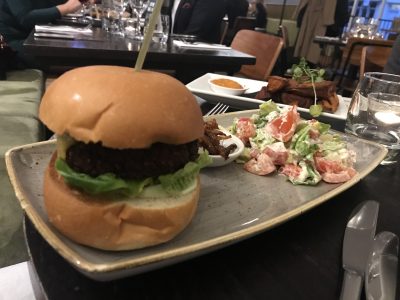 Gary got the burger. Of course he did, The Gate Beetroot burger, which was a beetroot and bulgur wheat patty topped with applewood smoked cheddar, served with bbq oyster mushroom, a garlic aioli, pickled cabbage, and served with green leaf salad. You know Gary and mushrooms, he almost didn’t get them. The server told him they were on the side so he got them to give to me. He tasted them and loved their smoky flavor and chewy texture. He gave me a taste but basically kept them for himself!

Yes, again we had dessert!

Gary chose the cannoli. The delicately sweetened cashew cream was piped into a chocolate flavored pastry tube that tasted like it was baked and not fired, and the ends were dotted with crushed pistachios. Gary said it was tasty and a very unique variation on the classic Italian dessert which is normally dusted in powdered sugar. At The Gate they also serve their cannoli with a generous swath of strawberry preserves painted on the plate. Delicious! 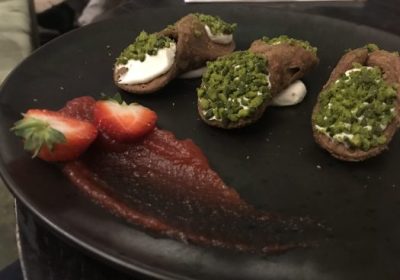 I went with the Tiramisu. I don’t know if I ever had Tiramisu before I went vegan in 1988 so I can’t make a comparison. All I can say it this was very, very good. It was a delicious combination of cocoa, coffee and sweet creamy loveliness! 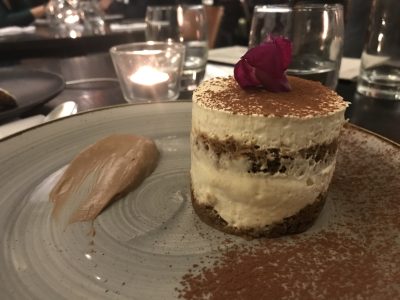