After three nights in London we are moving on to Paris. We had planned to stop at Le pain Quotidien in Marylebone for breakfast with vegan croissants but chose to sleep in instead. Serendipity struck! When we got to the St. Pancras Station to board the Eurostar we were so excited to see another Le Pain Quotidien there. We grabbed Chia Seed Coconut Pudding for both of us, a vegan Croissant for me, and a vegan Pain au Raisin for Gary.

The boarding was a little intimidating for the Eurostar. It was a bit like boarding for a flight. We had to stand in a long queue for our train. We went through the passport control for Great Britain and then a few feet after that another passport control for France. (Thank you Brexit!). Next we sat in a waiting room until it was time to board the train. We may have gotten a little bored (and silly) waiting to board. 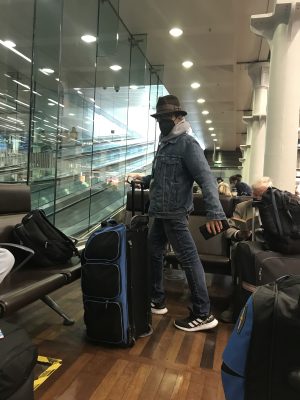 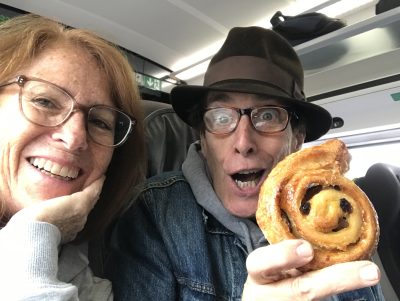 We found our train car, stored our suitcases on racks and took our seats. I didn’t think about it until the night before that there would be food served on the train. They offered special meals, including vegan, but you had to order them 48 hours in advance. I blew that. But we wouldn’t starve. We had all our treats from Le Pain Quotidien to enjoy. 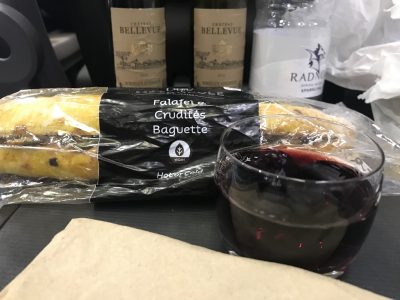 When the train attendant came by with the meal service, I explained that we were vegan and forgot to order our special meal. He came back a little while later with vegan Falafel Sandwiches for us from the Bar car. He said that he didn’t want any of his passengers to go hungry. They were the best Falafel Sandwiches ever! They were served on baguettes that had turmeric in them, which gave them a brioche color. Would you like a little wine with your sandwich? Mais, oui!

The ride on the Eurostar was so comfortable. We loved watching the changing landscape when we weren’t in a tunnel underground.

We arrived at the Paris Gare de Nord and waited on a taxi line to get a ride to our hotel in the 15th arrondissement. We were staying at a charming little boutique hotel in a residential neighborhood on the Left Bank. After checking in, we set out to discover the neighborhood. The Eiffel Tower was nearby and we headed in that direction.


The Eiffel Tower is especially magical and romantic at night. There were many people sitting on the lawn enjoying the beautiful evening. We walked all around the tower admiring the surrounding views. 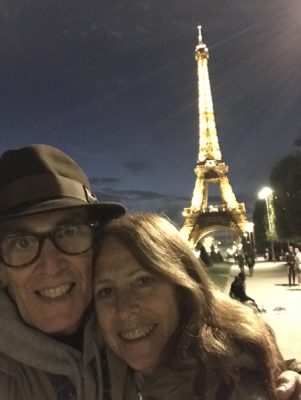 As we started to walk back to the hotel, I checked the Happy Cow app to see if there was a place to grab a late dinner at around 10pm. Not far from the Eiffel Tower and heading back in the direction toward our hotel was a vegetarian cafe called Vege. We could not have found a better spot! The restaurant was on a small side street, rue du théâtre. We sat at a little quiet table outside and ordered a carafe of wine, sparkling water, and some salads. This was a perfect Paris night, like you would imagine in a movie. We needed to hydrate, first with water, then with wine. 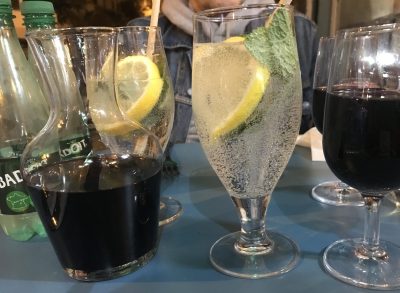 The salads were gorgeous. I loved the fresh figs. Mine featured Avocado. 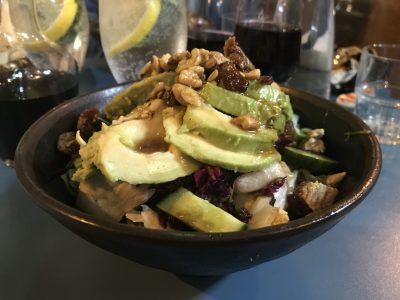 Gary got the Lentil Salad. 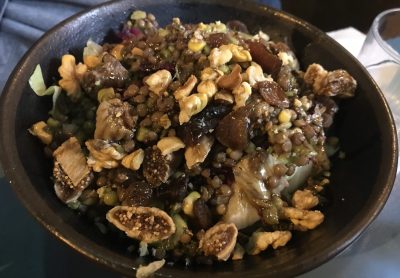 Who is that charming fellow sitting across from me? 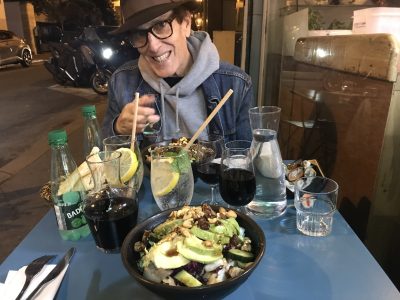 There was Halvah for dessert!! 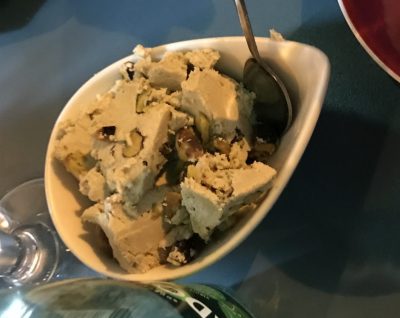 Another incredible day! We walked back to our hotel for a sweet night’s rest. There was a small market that was open late. We picked up bottled water, lettuce, avocado, potatoes and some fruit to prepare in our hotel room’s little efficiency kitchen for tomorrow. So ends Day 4 of our 25-day Magical European Tour.