The plan today was to meander North from the Hotel in the 15th arrondissement to Le Jardin de Luxembourg, pass by La Sorbonne University, the Latin Quarter, and Shakespeare and Company Bookstore, with the ultimate destination of le Théâtre de la Huchette to see Ionesco’s play La Cantratrice Chauve (The Bald Soprano). We did it all and more.

I made hot tea in the hotel. Then we were ready to venture out.

First stop was food. On HappyCow.net I saw there was a place called Copper Branch that was on the way to Le Jardin de Luxembourg. We were last in Paris in 2008 and I was surprised to see how many more fast food, counter service stores had popped up. This was one of them. You could order from a screen or talk to the person behind the counter. The orders were taken and the food arrived from somewhere below us on a small elevator. We both got bowls. Although the food was vegan, it was salty and not memorable! Certainly not worthy of a photograph. But it was quick and it was vegan, and we were grateful for both because we had a lot of Paris to do! We finished up our food and continued on the journey. Here’s some photos we snapped along the way. 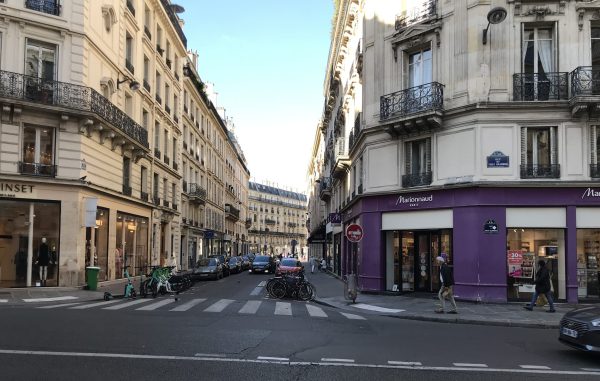 We walked back towards Rue Madame to head towards Le Jardin de Luxembourg. 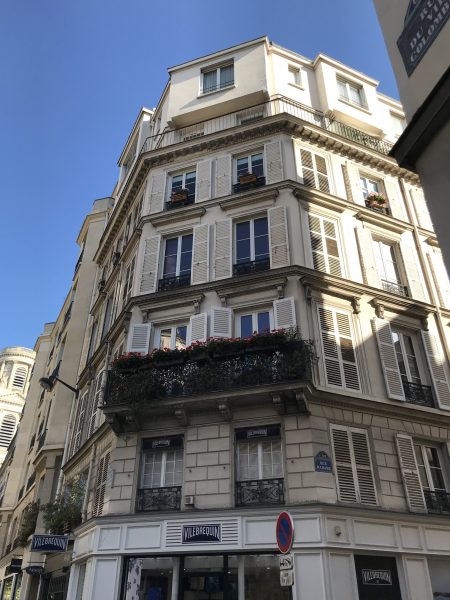 There were words of wisdom all around. 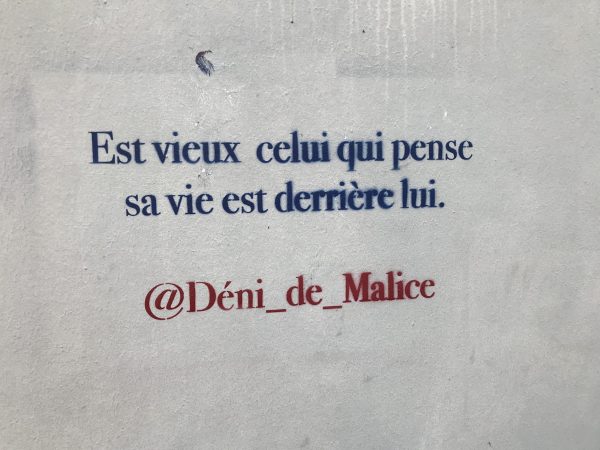 Translation: he is old who thinks his life is behind him

We turned to the Place Saint-Suplice with the lovely Fontaine Saint-Sulplice. 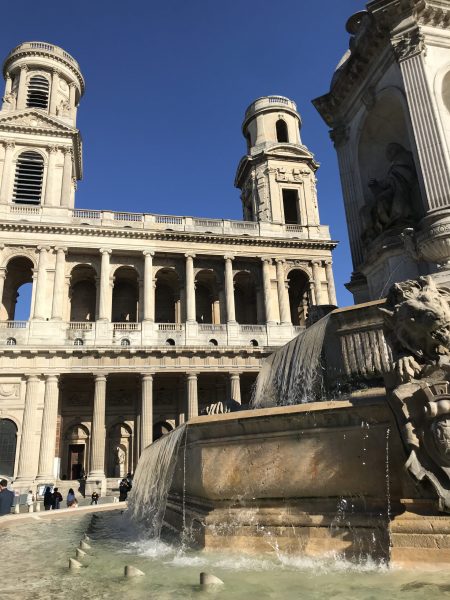 Gary took a moment to reflect with an old friend. 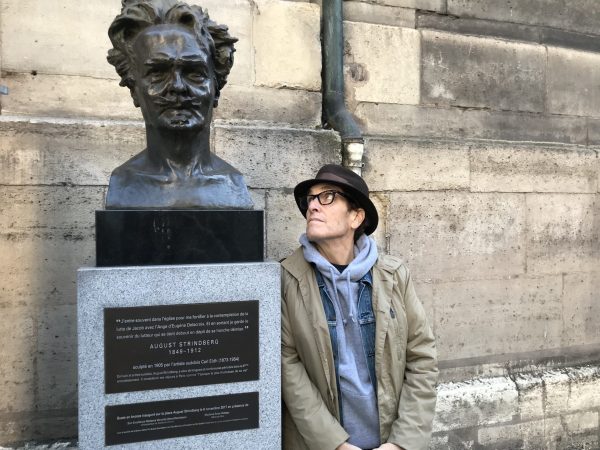 There is some awesome graffiti! 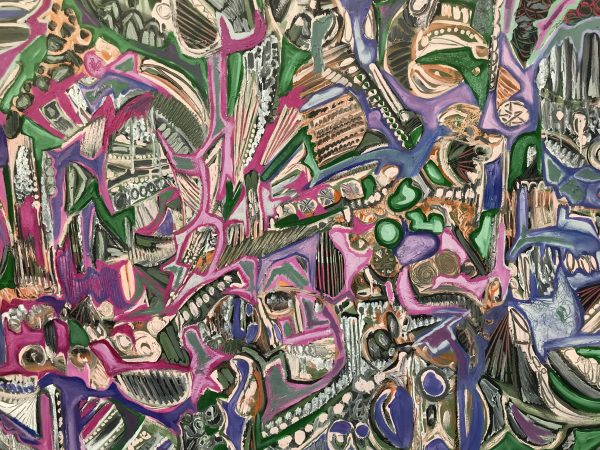 Here’s the Odéon-Théâtre de l’Europe (English: European Music Hall) (formerly the Théâtre de l’Odéon (English: Music Hall)) which is one of France’s six national theatres. It is located at 2 rue Corneille in the 6th arrondissement of Paris on the left bank of the Seine, next to the Luxembourg Garden and the Luxembourg Palace, which houses the Senate. 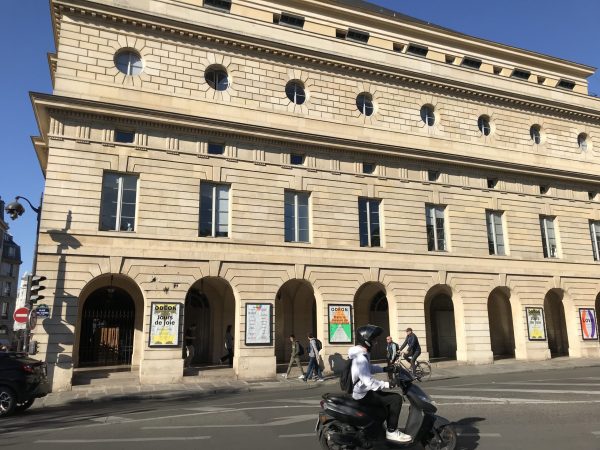 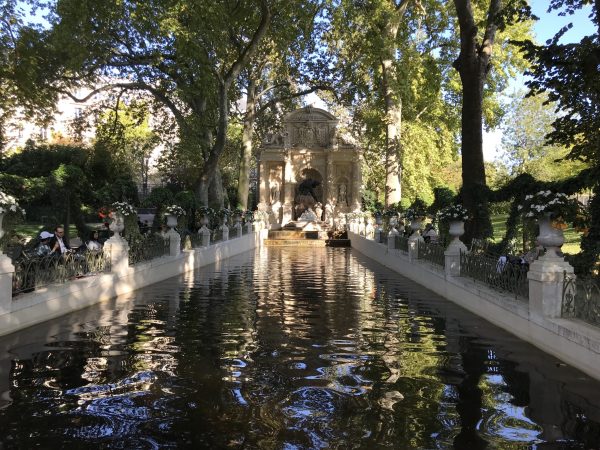 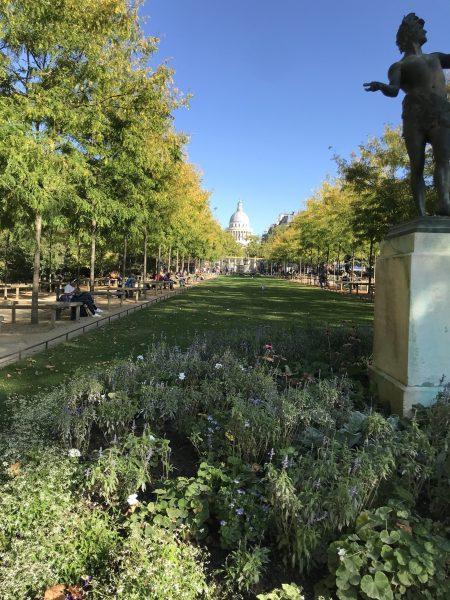 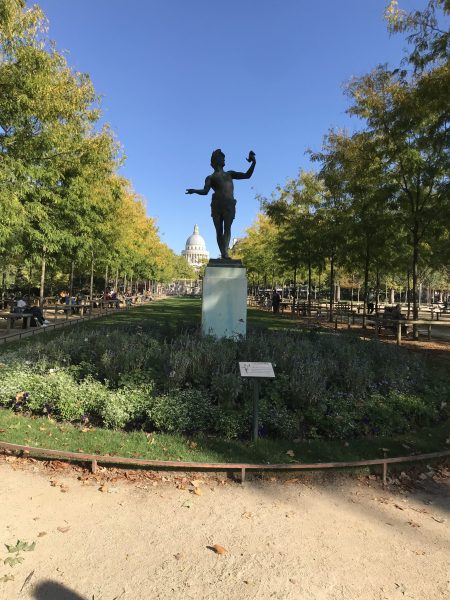 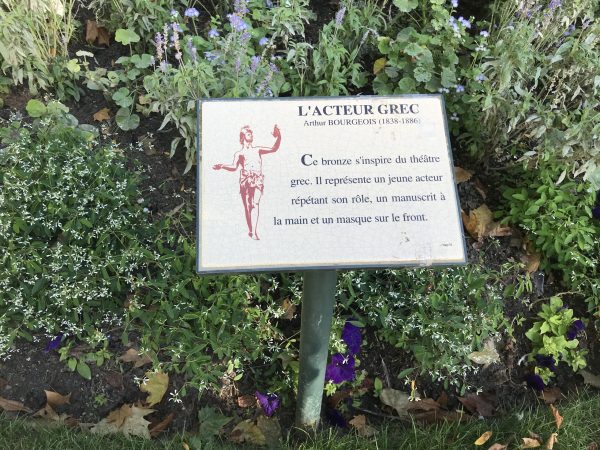 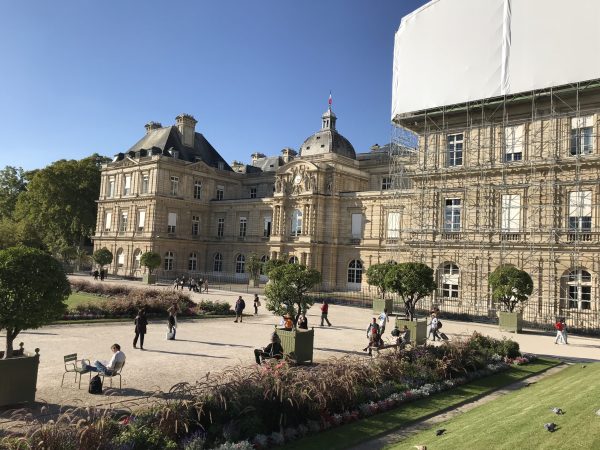 Saint Geneviève, who through prayer, supposedly saved Paris and avoided an invasion of Paris by Attila. 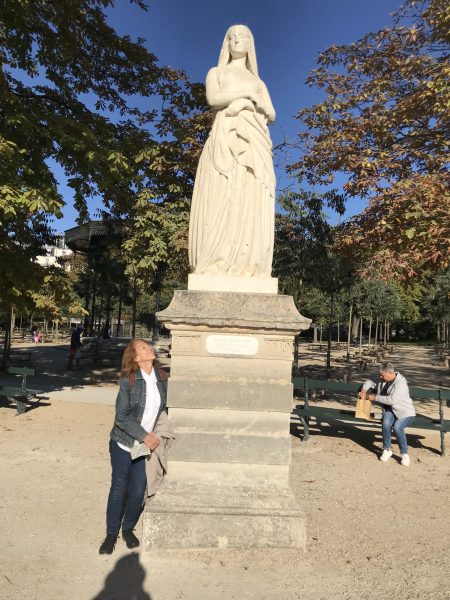 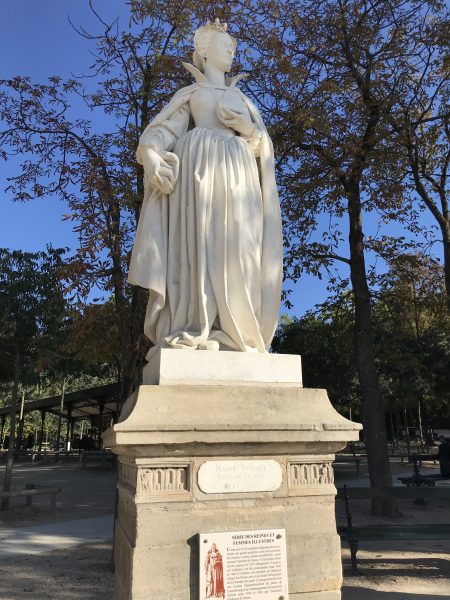 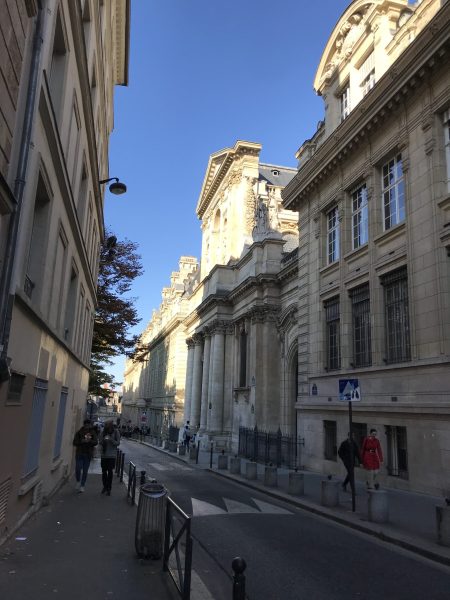 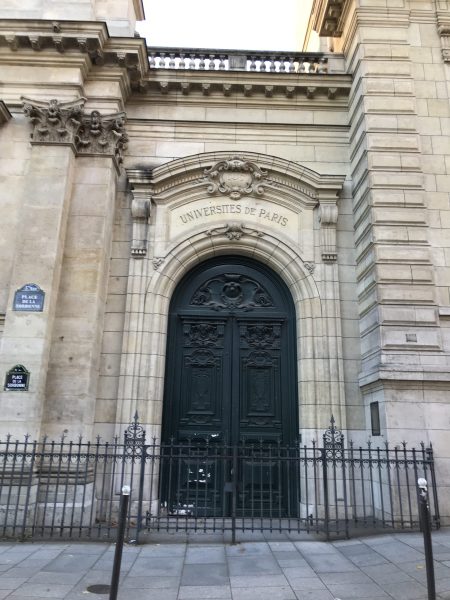 Parc Samuel Paty. Perhaps you remember reading about the murder of Samuel Paty , a French secondary school teacher, took place on 16 October 2020 in Éragny-sur-Oise, a suburb of Paris. Paty was killed and beheaded by an Islamist terrorist. This park was named after him. We walked through this peaceful square to acknowledge this teacher who defended, with his students, the principles of freedom, equality, fraternity and secularism. 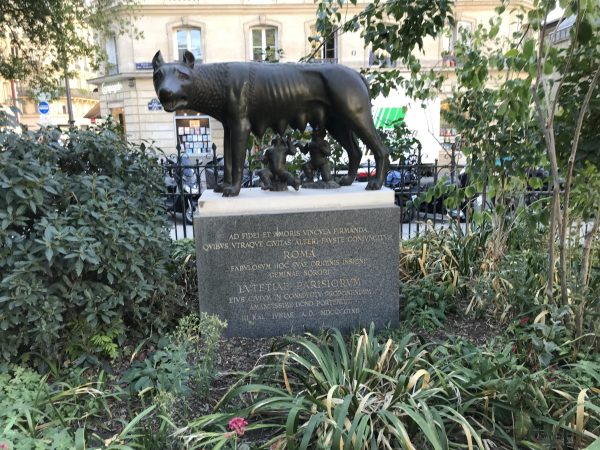 Cluny Museum – National Museum of the Middle Ages. We admired this ancient building which is now a museum located in the Latin Quarter. 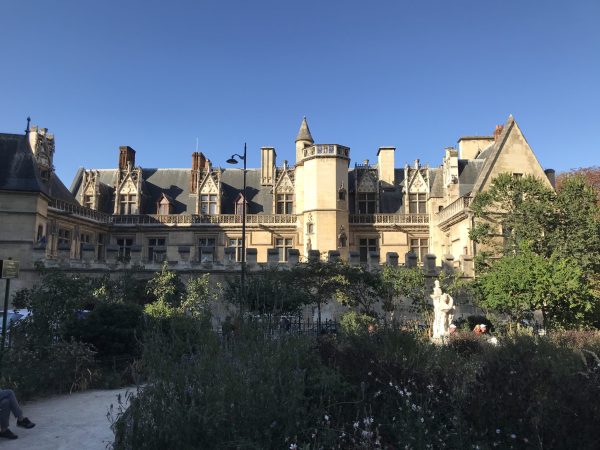 Gary was so excited to see and visit this renowned bookstore. 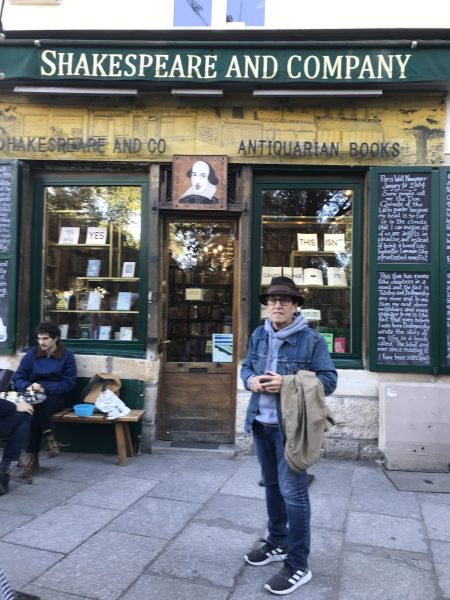 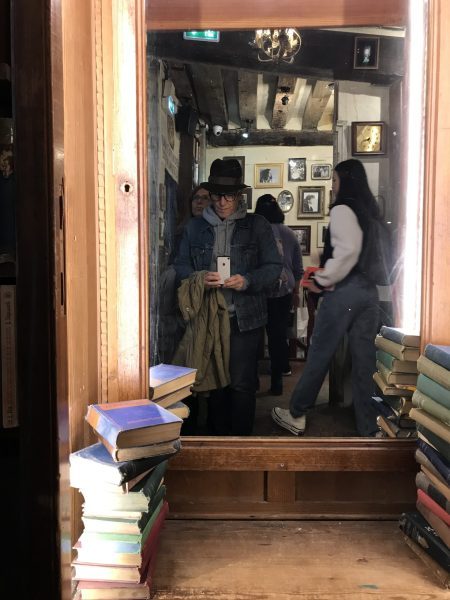 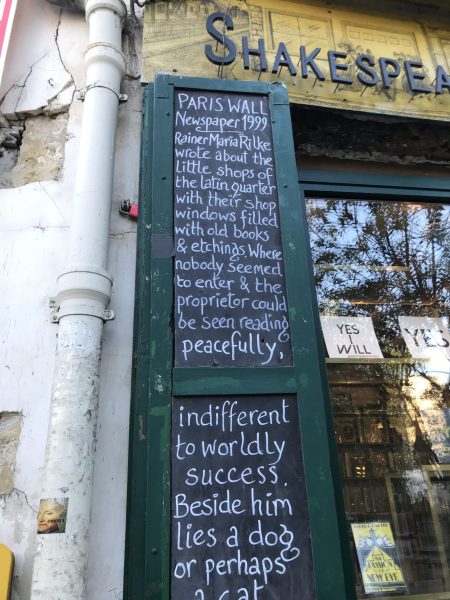 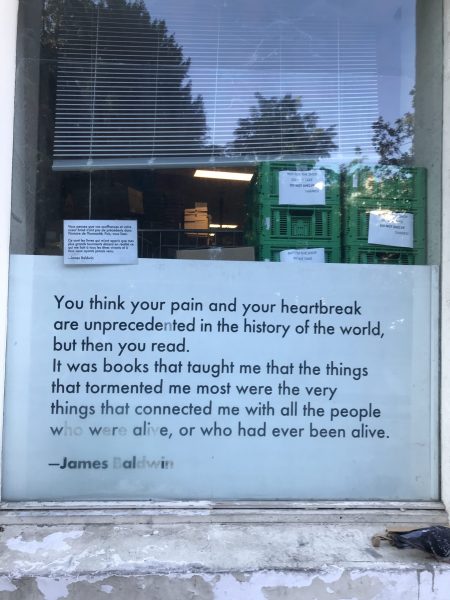 We stopped at the Tea Caddy to warm up with hot tea before heading to the theatre. This cozy British tearoom opened in 1928 and serves aromatic teas in fine china. 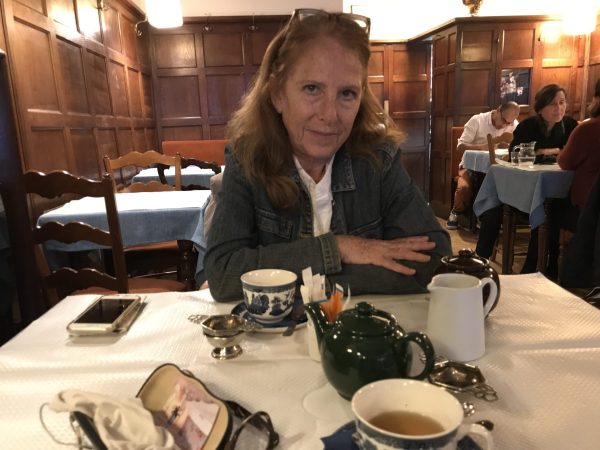 The highlight of the day was seeing Ionesco’sThe Bald Soprano at the Théâtre de la Huchette. The Théâtre de la Huchette is a tiny theatre known for playing Eugène Ionesco’s absurdist double-bill of The Lesson and The Bald Soprano in permanent repertory since 1957, as “Spectacle Ionesco.” Today, a third play is presented and this changes from time to time. Just by chance we were there on a Wednesday night when they displayed supertitles in English. I Had last seen The Lesson here in the ’80s! 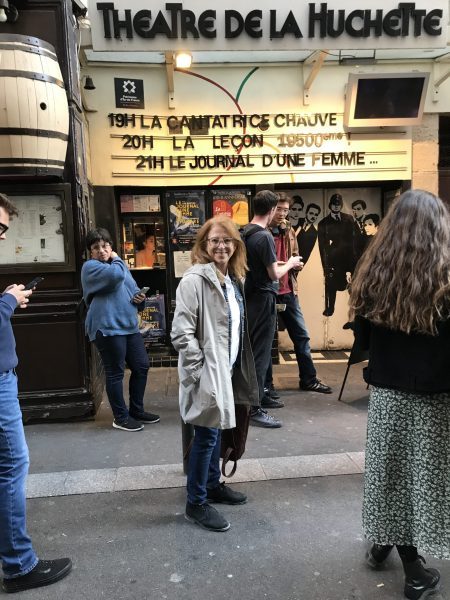 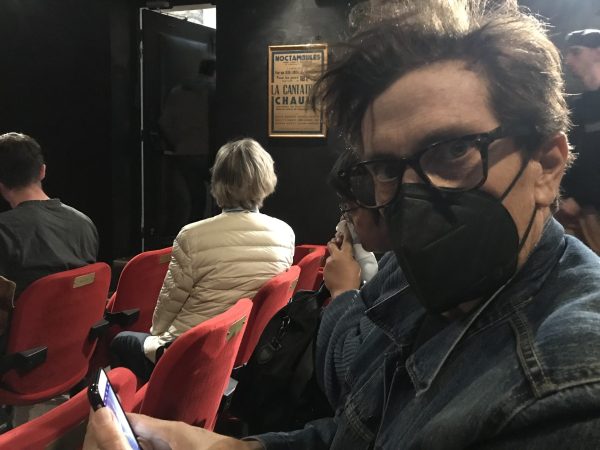 The performance was thrilling! The actors were excellent, all of them completely committed to the work. This was surprising for a theater that has been running the same works night after night for decades!

We walked back to the hotel. Chef Gary prepared a nourishing, comforting delicious meal, “chez nous” of salad, guacamole, and potatoes. 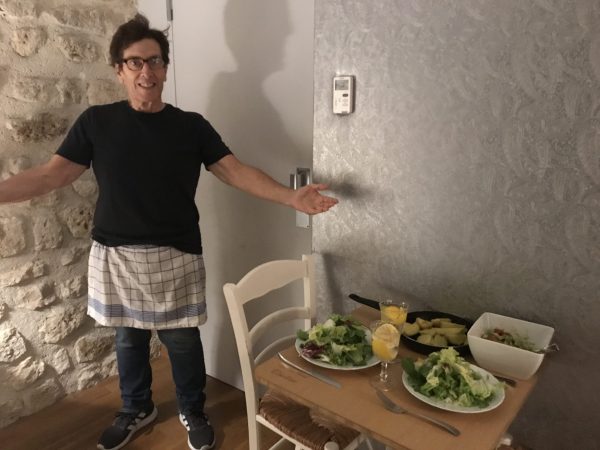 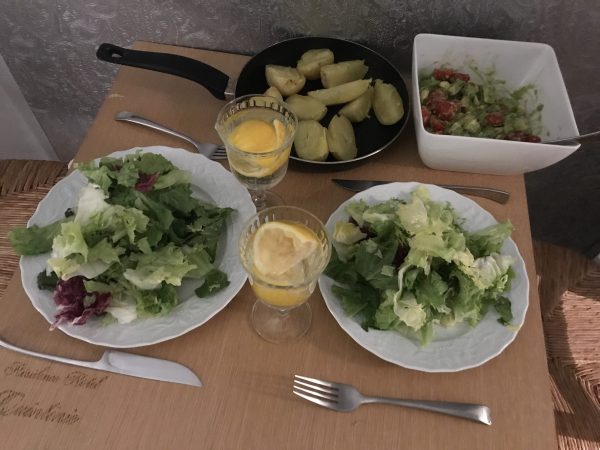 We had walked 7.6 miles today. Not as much as our first days in Europe but enough to be ready for a nice rest.