As much as we would have liked to have stayed in our little boutique hotel, the Hotel Residence Quintinie Square, in the 15th arrondissement, I was not able to reserve this place for any more days. When we were checking out we were told they would be renovating soon. We’ll have to come back later and see what they’ve done with the place. We moved on to La Rive Droite, the north side of the Seine in the 9th arrondissement to the Hôtel Maison Axel Opera. Our taxi driver was very friendly and assured us we would be staying in a very lively area! He shared with us a few of his adventures as a driver and we told him he should write a Netflix series about them.

All of our hotels so far have been very nice, albeit small but this hotel was the smallest. There was barely enough room to walk around the bed and certainly no place to unpack our clothes. We lived out of our suitcases. I needed to hand wash some clothes and got creative using the shower and the bathroom towel warmer. Paris somehow made it all seem so romantic. We truly felt like we were living la vie bohème!

In the afternoon we were ready to take off again. The first destination was for food, and we went to Le Potager de Charlotte. We were so happy to find salads on the menu! We both had the Seasonal Greens Salad which was full of so many fresh and delicious fruits and vegetables like figs, and blueberries and garbanzo beans. We also shared a starter of savory pancakes. Check out the seasonal menu. 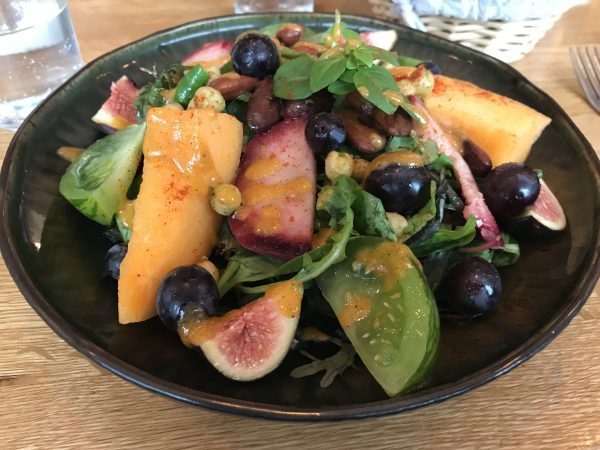 Our server, Adrien, was very enthusiastic and upbeat. We learned that he was the co-owner along with his brother. When I mentioned I knew Dr. Michael Greger, the author of the book on display, he told us how Dr. Greger had been to the restaurant in 2015 and signed the book. 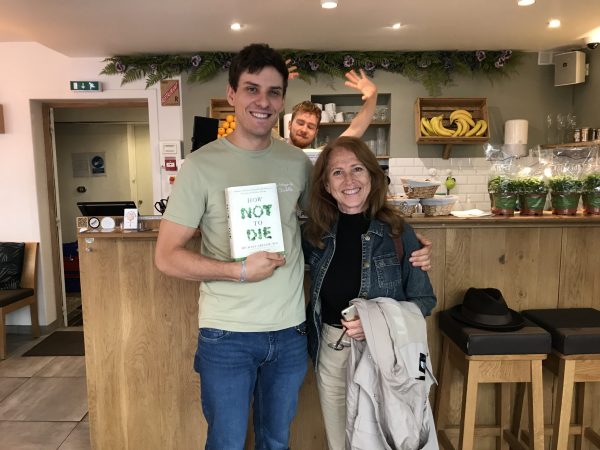 After our delicious and nourishing lunch it was time to explore. We were not far from Montmartre and I always loved making the climb to this part of Paris toward the Sacré-Coeur. We started our journey on the Rue de Maubeuge. 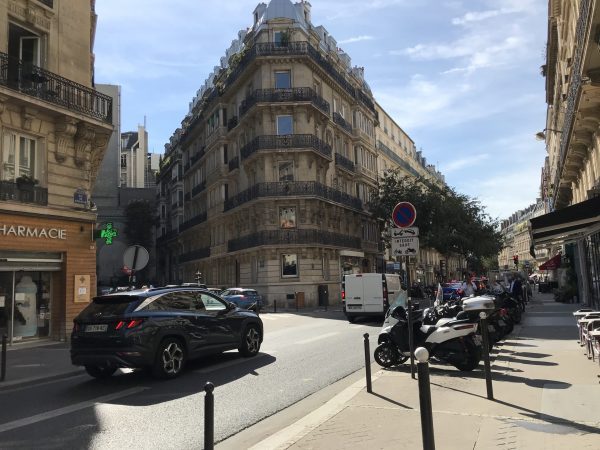 I am sad to say we were disappointed. This beautiful spot is a major tourist attraction. It was crowded and full of people trying to sell all kinds of cheap souvenirs. We couldn’t get away fast enough. Looking around we walked behind the Basilica and found a different route downhill and back to the hotel.

In the early evening we had a dinner date with our friend Sheikha Paula, a senior ranking member of the Kuwait Royal Family, originally from New York. We met Paula through our friend Linda Long. She happened to be in Paris when we were there and invited us to dinner.

Since we had time, we decided to walk. It would take about an hour and 20 minutes. Walking is a wonderful way to see a city. We were ready to relax and eat when we arrived! We were joined by her friend and colleague, Michael Bolla. After drinks and nibbles of olives and mixed nuts in her beautiful apartment in the 16th arrondissment, we went to the Brach Hotel for dinner at The Restaurant, described as “an immersion in Mediterranean cuisine… based on the products of these terroirs bathed in sun, spices and scents from elsewhere, selected from inspired and inspiring producers.”

We ordered a number of Mezze dishes including Hummus with sumac powder and Iranian zaatar and caviar lime and Mouhamarra with pine nuts, a purée made from red peppers and walnuts. I have never made Mouhamarra and need to start soon!

Paula and Michael drove us back to the 9th arrondissment. When we went through the Alma tunnel, Michael informed us that this was where Princess Diana’s fatal car crash had occurred in August of 1997. We were happy to make it back safely to the hotel!

This was another amazing day of sites and activities. We clocked in 8.1 miles.