After another “grace matinée” we got up in the afternoon and walked down the Rue du Faubourg Montmartre in the direction of the Seine. It’s our museum day. 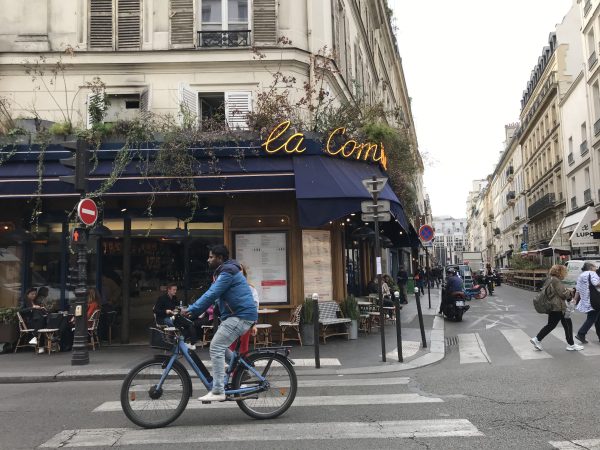 Whether in a museum or painted on a wall on the street, we appreciate art. 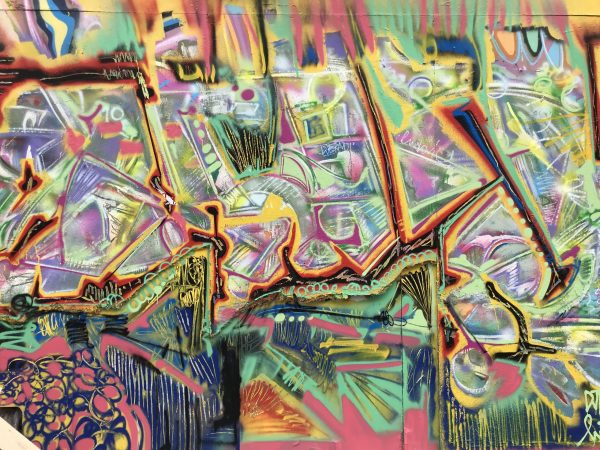 It was recommended to not miss the Pinault Collection at the Bourse de Commerce so that was our first destination. 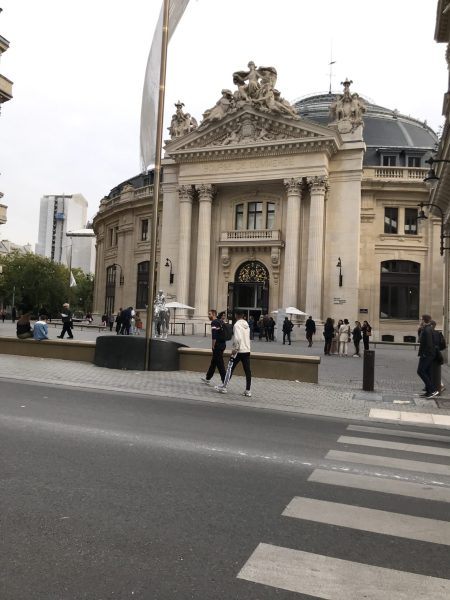 I have to say, I love the Paris street signs. They are clear and as permanent as all the stately structures lining the streets. The Rue du Louvre goes along the north bank of the Seine, leading up to, need I say, The Louvre Museum. We reached the Bourse de Commerce at Rue Adolphe Julien. The street signs also give a bit of history. Read the fine print under Rue Adolphe Julien: 1803-1873, Ingénieur Promoteur des Chemins de Fer and learn that Adolphe Julien was a principle promoter of the railway. Who needs a tour guide when you have these street signs?! 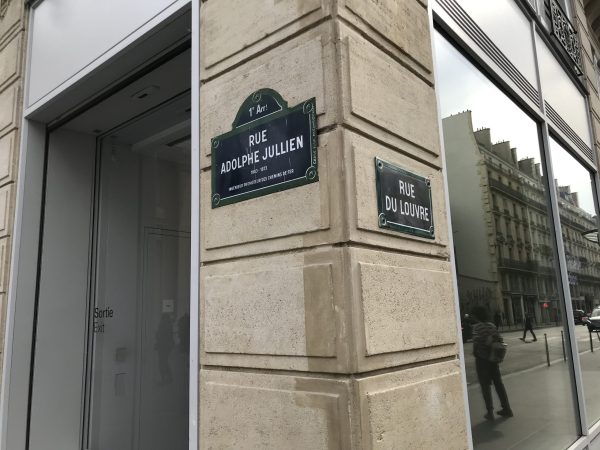 Here I am at the Bourse with the Silver Horse! 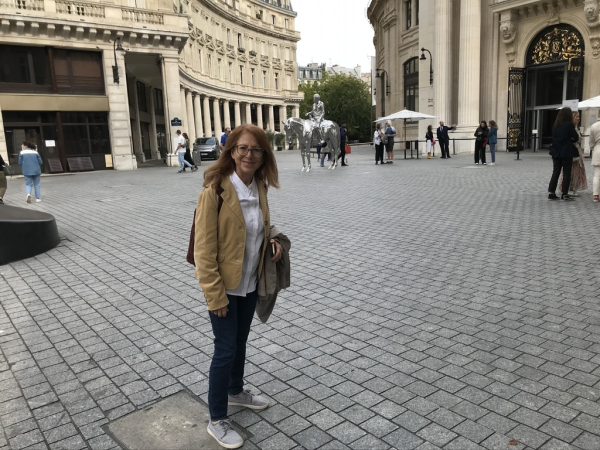 The Silver Horse and its Shiny Rider by Charles Ray, or in French: le Cheval Argenté et son Cavalier Brillants. 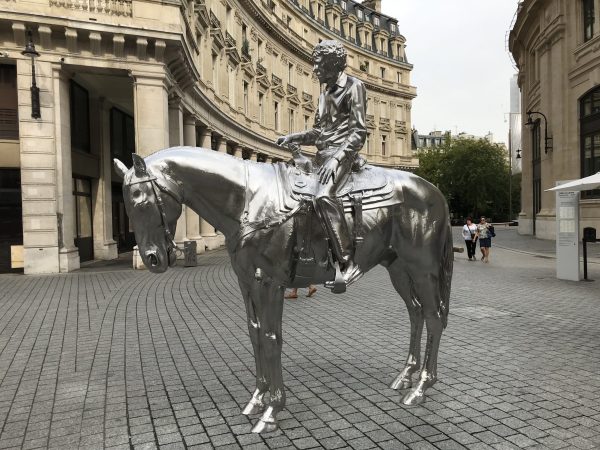 The Bourse de Commerce was originally used as a place to negotiate the trade of grain and other commodities, and used to provide services to businesses by the Paris Chamber of Commerce during the latter part of the 20th century. While we mostly talk about food, this building seems appropriate to highlight since it once dealt with the sale of grains.

From the website it says: The Bourse de Commerce welcomes specialists and novices. Withhold your opinion and expectations, you may either love or hate what you see, but prepare to be either captivated or challenged. We went to see the exhibit Une Second d’Eternité, (a second of eternity). The first work in the grand circular entrance was intriguing. The rest was subjective. 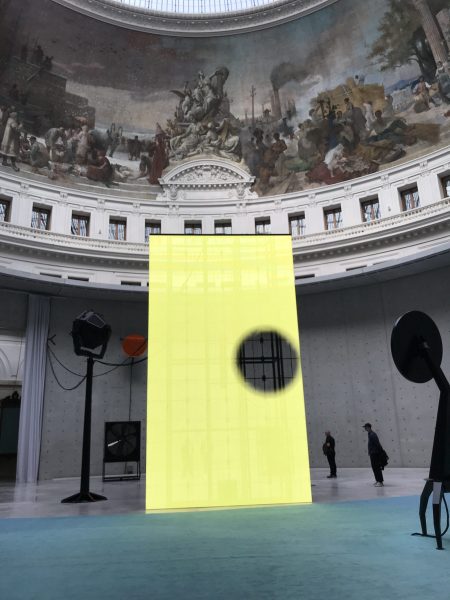 But do look up! The building itself is stunning with it’s cupola and panels of ceiling art. 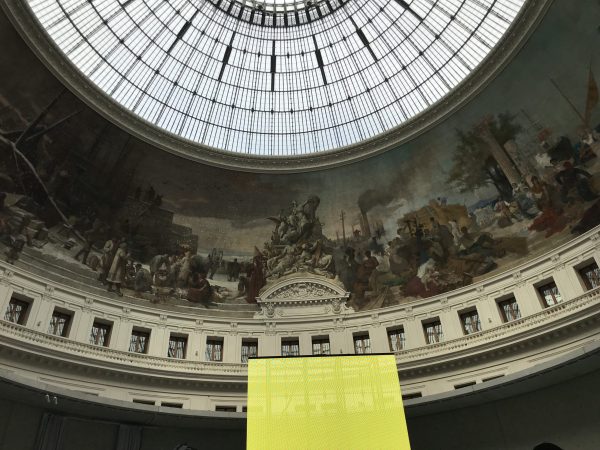 When the Rue du Louvre ends at the Louvre, one must stop. 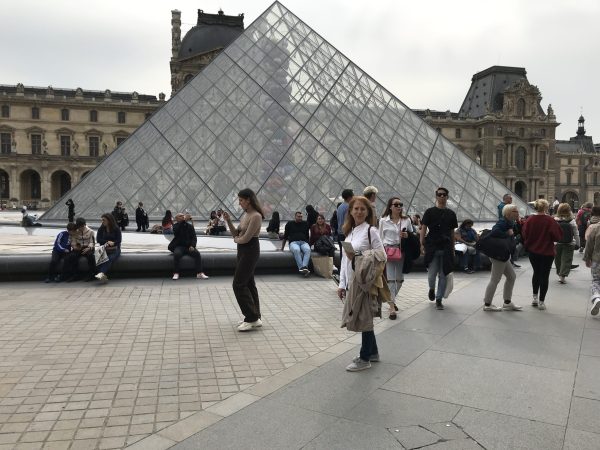 Art is everywhere, whether or not you recognize it as such. 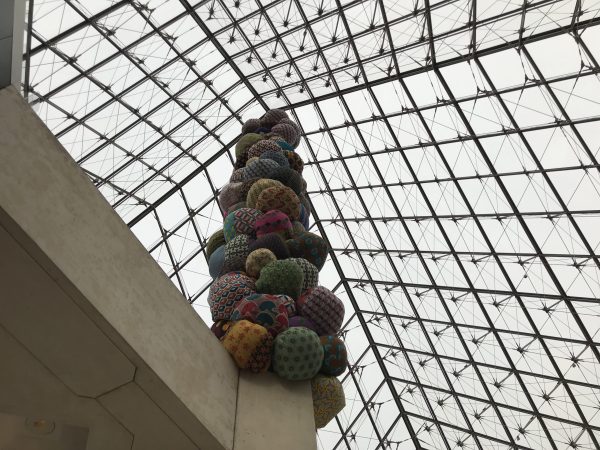 There’s a lot more to the Louvre than old paintings and sculptures. There’s the Carrousel du Louvre, for shopping! 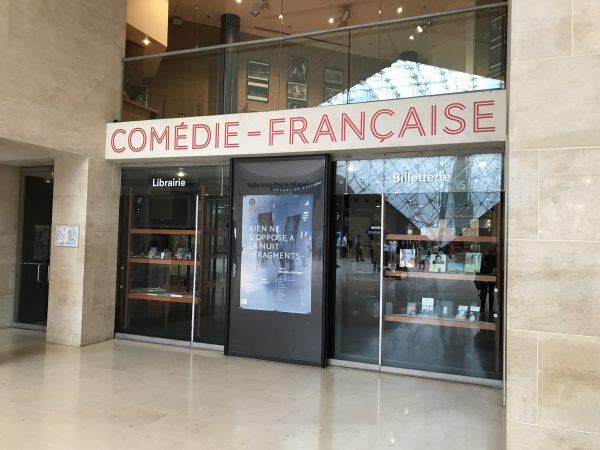 And candy! As explained on the website: The Conﬁseries Veggies was founded in the summer of 2012 with the French concept of vegetarian candies and dietary model of organic sweets without animal gelatin, gluten, lactose, egg, nuts, soy, GMO, artificial colors but 100% enjoyment, no compromise on taste. 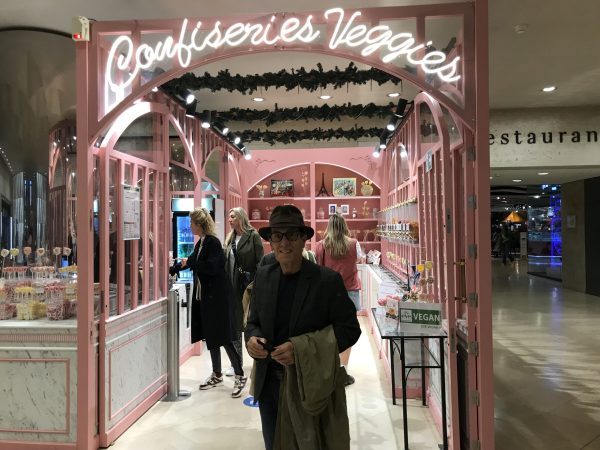 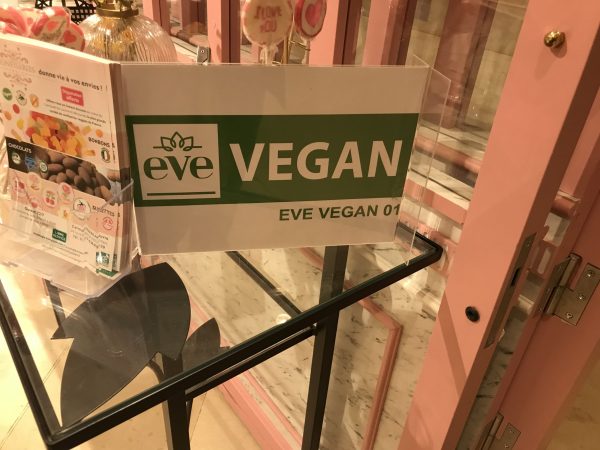 We learned about the EVE Vegan label.The EVE VEGAN® certification mark is a voluntary process recognised worldwide by those who are looking for products that are guaranteed to be free from ingredients of animal origin and not tested on animals. Present on the packaging of products sold in shops, the EVE VEGAN® mark guarantees that the product has been checked by Expertise Végane Europe according to a certification procedure which includes at least a documentary file and an audit of the production area.

Now we were getting hungry and had not eaten all day. The dinner we had the night before kept us satisfied for a long while. It would soon be time to eat. But first, I needed to find a salon to wash and blow dry my hair! I did not bring my blow dryer and curling iron with me because they run on 110V, not 220V here in Europe. A week had gone by and I had to wash my hair! We found a salon and I went in. I speak French but was not sure of the correct terminology for a “blow out”. I learned it is “brushing”. They use an English word! I was a little nervous when I sat in the chair after having my hair washed and the hairdresser started drying my hair without the brush to smooth and straighten it. It was not a pretty sight. I politely described how my hair was typically styled and she assured me everything would be all right, that she had been properly trained. In the end, she did a fine job. 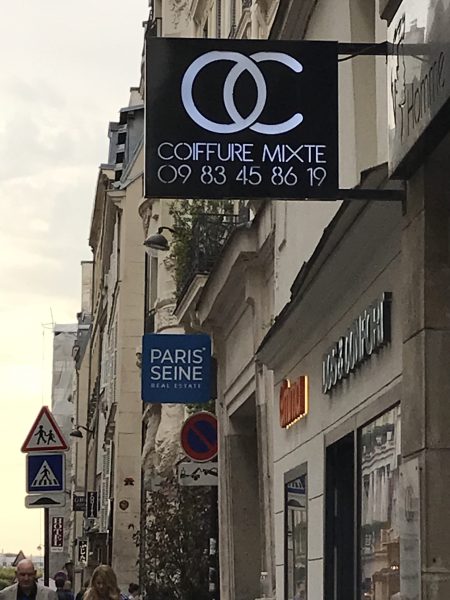 Can we talk about food now? It was 6pm and we were now really hungry! HappyCow.net led us to Wild & the Moon, a counter service spot with bowls, juices, smoothies, etc. Gary got the Acai Bowl with bananas, maple syrup, granola, blueberries and coconut. It made him smile! 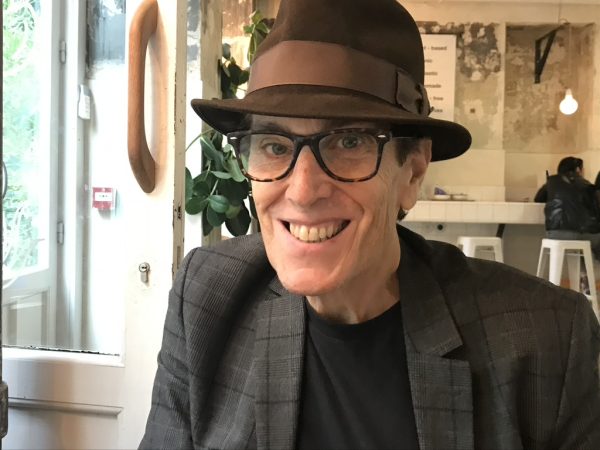 I got the Smooth Green smoothie, with Kale, Bananas, Apple, Lemon, Hemp Seeds and Coconut Water and the Matcha Bowl with Bananas, Blueberries and Granola. 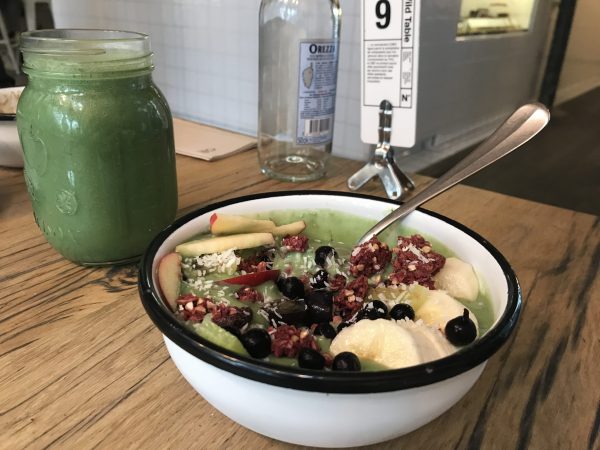 It had a hip vibe. I thought it would be nice to sit at one of the outdoor tables but no, that’s where people were smoking! SMOKING! Ah, the reminder that yes, we are in France. A lot of people smoke here, even those who eat at healthy, vegan places. We moved our table from close to the front door to far inside the restaurant. Unfortunately, cigarette smoke travels. Ugh.

After our meal we got walking again. We took the Avenue de L’Opera, having an idea it might lead somewhere impressive. Le voila! The Palais Garnier, the opera house. This was used as the setting for Gaston Leroux’s 1910 novel The Phantom of the Opera. 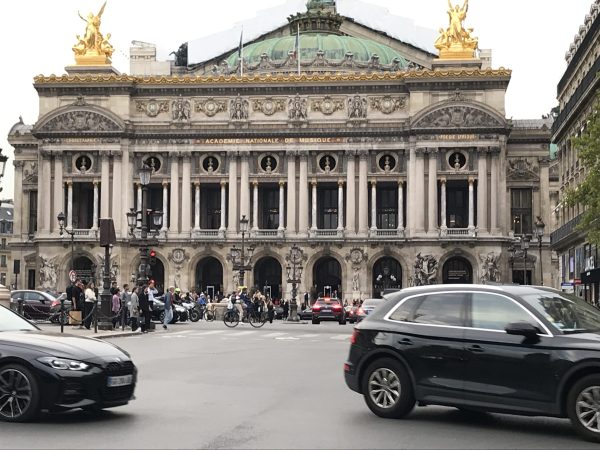 It’s immense. We walked all the way around. 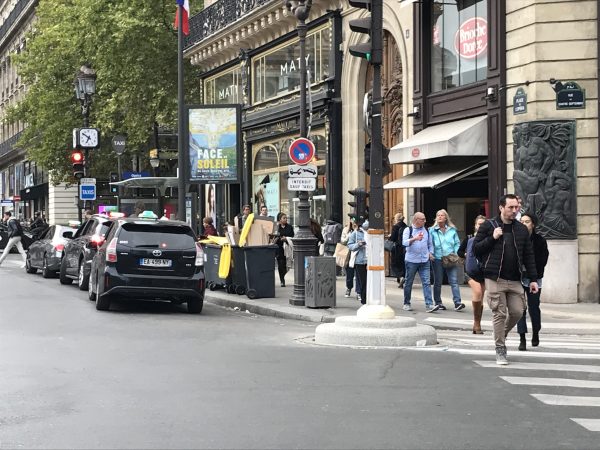 Here’s the opposite side. 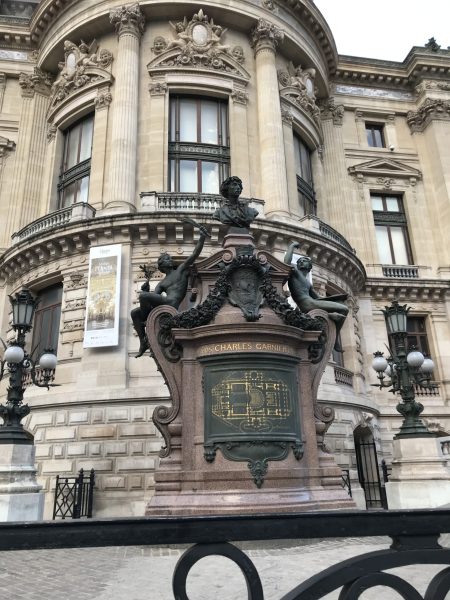 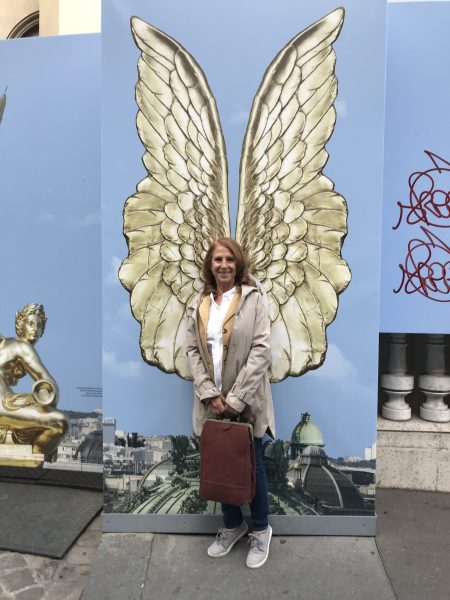 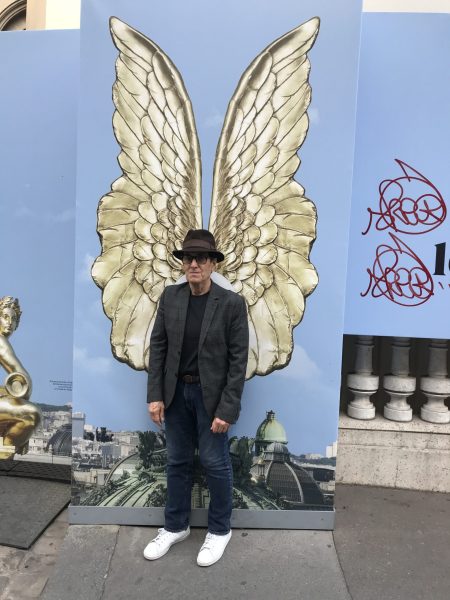 Next we walked down the Boulevard des Italiens and came upon the Opéra Comique. Perhaps this was the stage entrance? 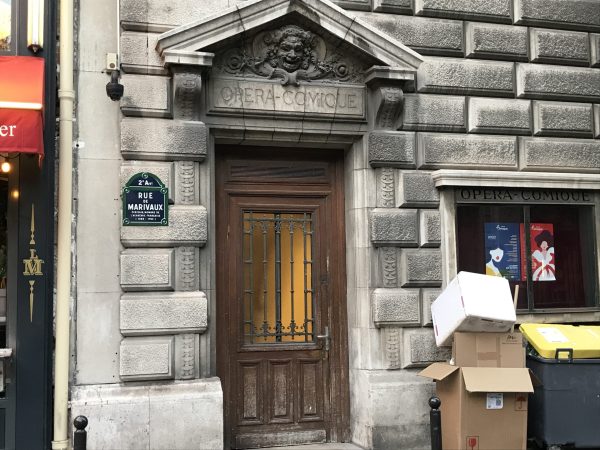 The next day we had a long train ride planned to Italy. We walked back to the hotel to pack and relax a bit. Then we set out for a late night dinner around the corner at Kokuban. 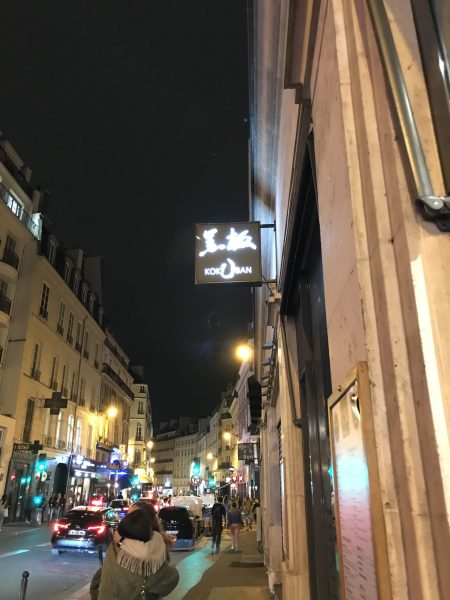 It was very lively and packed. We were lucky to get a table. I ordered Edamame, a Seaweed Salad and the Vegetarian Ramen. Gary got the Vegetarian Salad with cabbage, cucumbers, soybeans, wakame, and leeks with added tofu and a side of brown rice. When the food arrived he wished he ordered what I got. Sometimes you just need a good bowl of noodle soup with vegetables. It hit the spot. 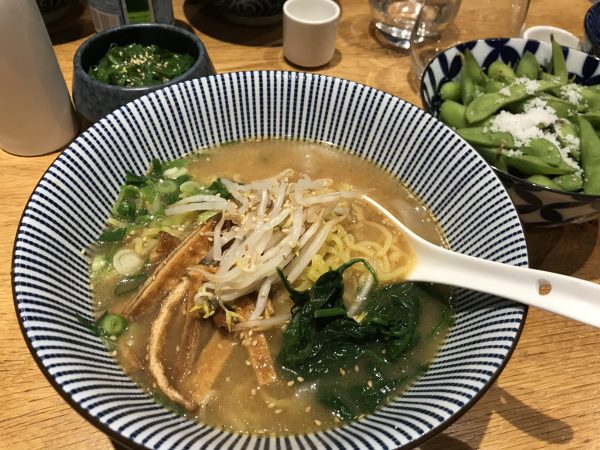 We walked over 6 miles today. It felt like more! Time to rest and then on to the next destination, Rapallo.