Just before leaving our hotel we stopped at a Monop’, a small grocery chain that is part of the Monoprix department stores around France. These small grocery stores, along with Carrefour Express are everywhere in Paris. Although I am not certain, I believe they have taken over many of the “mom and pop” grocery stores from decades prior. Whether this is good or bad, I cannot say. But we were glad to be able to pick up some water, bread, chocolate, fruit, and bottles of green juice for our long journey ahead.

Then we were off. We took a taxi from our hotel to the Gare De Lyon where we’d be boarding the TGV to Nice. From Nice we’ll be taking three trains with the ultimate destination of Rapallo, Italy. It’s a long day.

The taxi driver was very professional and friendly, wearing a stylish suit. He asked if we might want to grab a coffee before we take the train, suggesting a local cafe near the station. The train station will gouge you, he told us, everything is much more expensive there. We told him we weren’t interested in coffee but he dropped us off on the sidewalk by the station, not uphill at the station grand entrance. We realized he was suggesting going to a cafe first so as not to have to bring us up to the top, which he didn’t do anyway! It didn’t matter. We were happy to be there and excited about the train travel. And a little exercise would be beneficial. 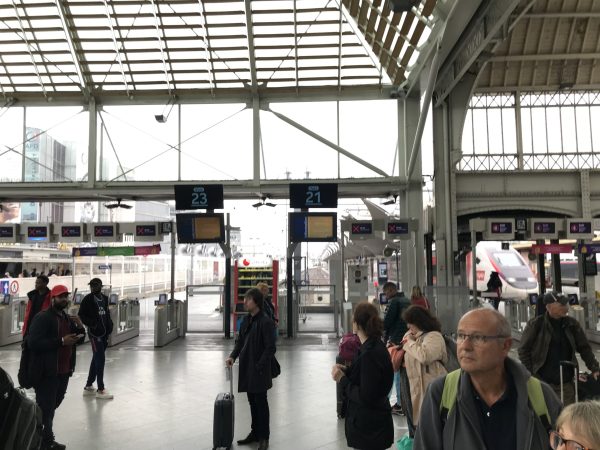 Checking the board for our train to Nice. 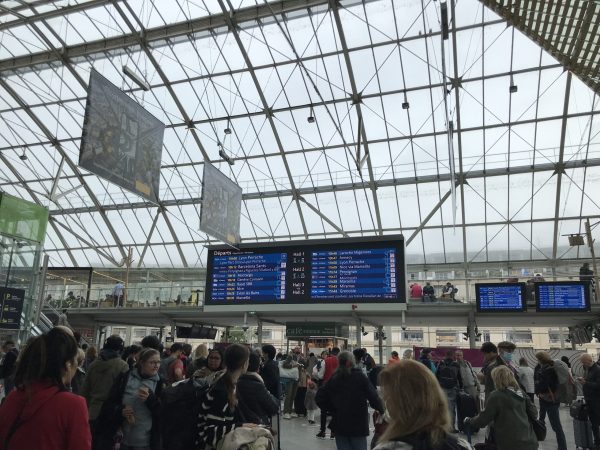 We had plenty of time before the train was ready to board. We’d be coming back here in a couple of weeks on our way from Aix-en-Provence to Paris Gare de Lyon, then taking the Eurostar from the Paris Gare de Nord back to London. I wanted to make sure we knew the best way to get to the Paris Gare de Nord when we returned because we would not have a lot of time. We learned that the Paris RER D train, one level down from where we were in the Gare de Lyon would get us to the Gare de Nord in about 12 minutes. That was ideal and there were plenty of machines there where we could each purchase our 1.90€ train fare. Once that was all figured out, I could relax a little and enjoy the day traveling to Rapallo. 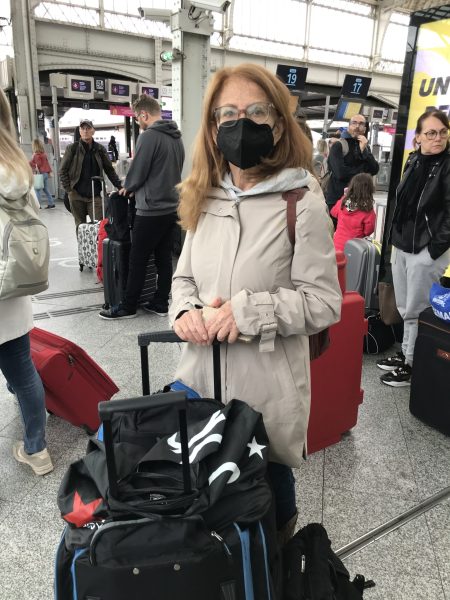 We are seated. The next train adventure begins. 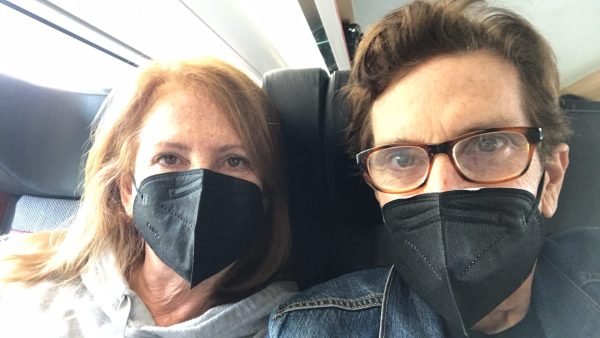 Once seated it was time to snack. We made our own “pain au chocolate” with organic baguettes and dark chocolate. We washed it down with a Spinach, Apple, Mango juice with Chia Seeds. Not a bad breakfast, right? 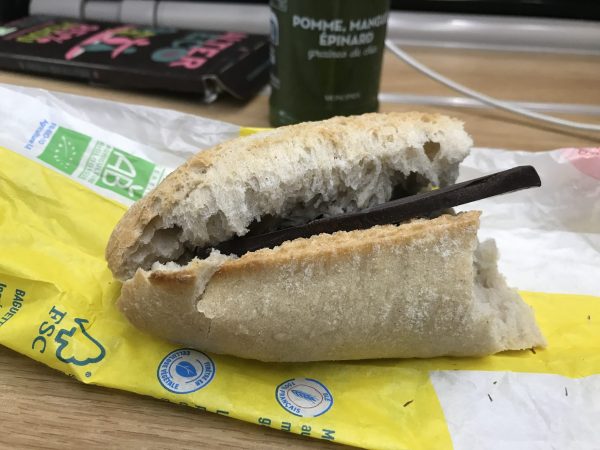 I checked out the menu in the dining car. They actually had vegetarian, vegan and organic items marked. Three items were a vegan: an organic taboulé salad, an organic dessert, and organic chips. It wasn’t a great selection but it was something and I was thrilled to see it. If we hadn’t brought our own food, I would have gone for the taboulé salad. 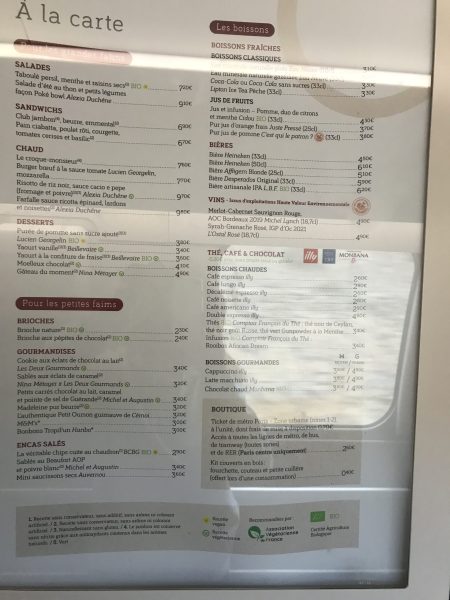 The time flew by. In less than four hours we were passing through Toulon, a city on the French Riviera and a large port on the Mediterranean coast. 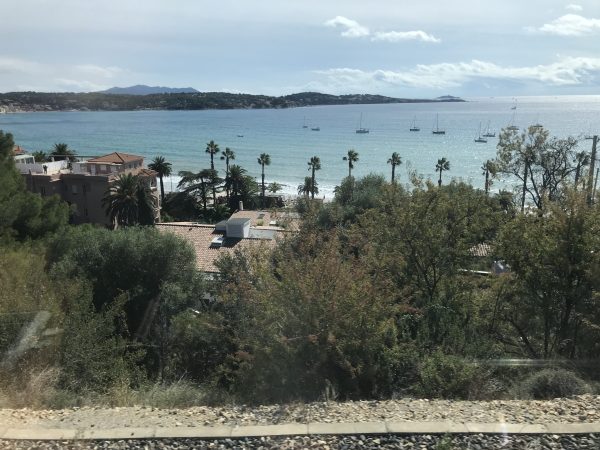 The train stopped briefly at the Toulon Station. 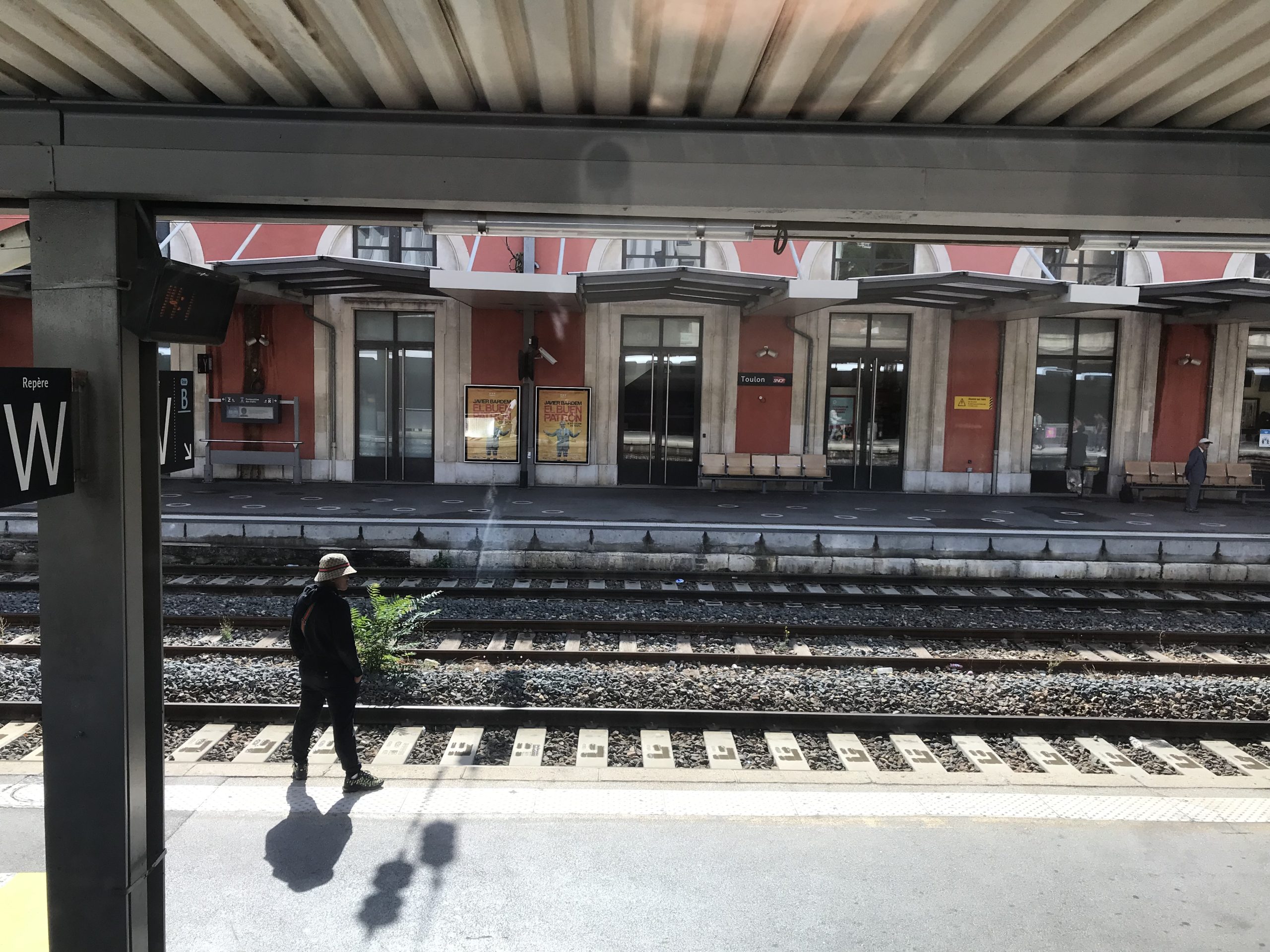 The scenery was so lovely, especially passing through Cannes and Antibes. Had we flown we would have missed all of this! 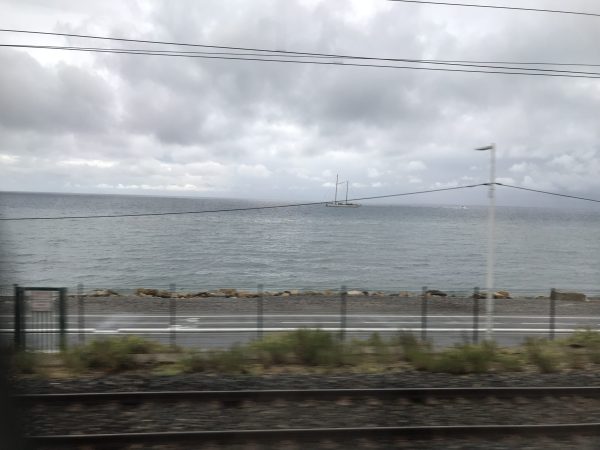 We arrived in Nice and quickly found our next train to Ventimiglia. About an hour later we arrived in Ventimiglia and looked for our train to Genoa. It was not clear where to go. I asked a conductor from the French train we got off of. He told us he didn’t know anything about the Italian trains! They both arrive and depart from the same station but they pretend not to know each other. We had to navigate some stairs going down, find the right train and bring our luggage up another set of stairs, but we made it with plenty of time. There were many stops on this train including four in Genoa before we reached the last stop. Then we changed trains one last time, to get to Rapallo. 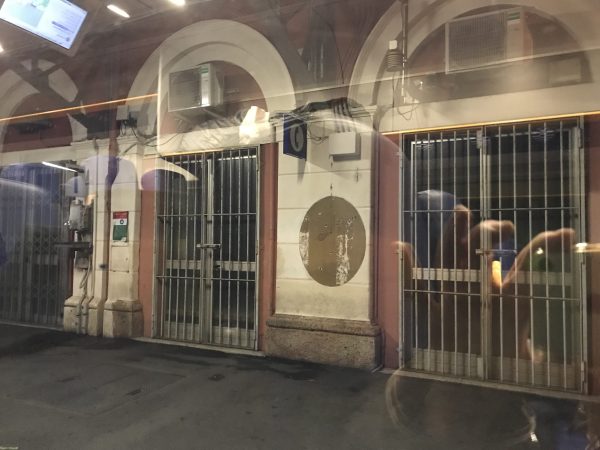 We arrived in Rapallo at about 9:15pm. We made it. 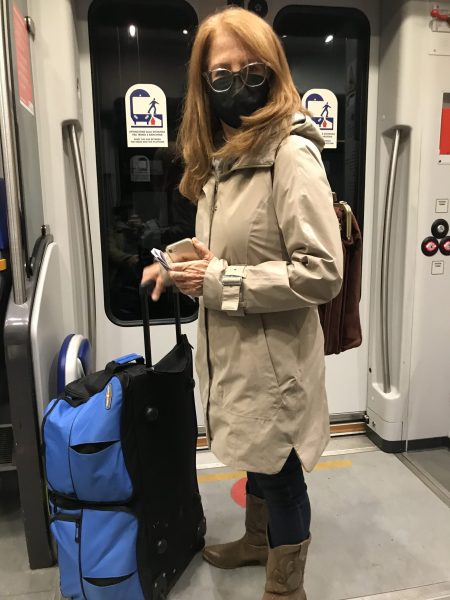 We walked in a light rain to our hotel about 7 minutes away. The cafes were full of people. We checked in to our hotel, Hotel Italia e Lido. Our room had a balcony and we were blown away by the view overlooking the Ligurian Sea. 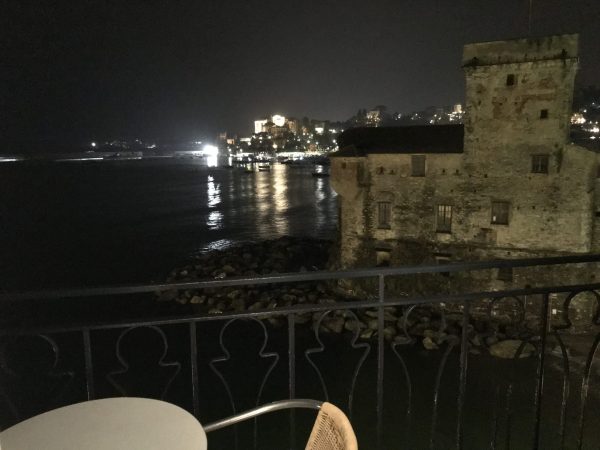 After spending the day riding on trains we needed to get outside, walk around, and find food. 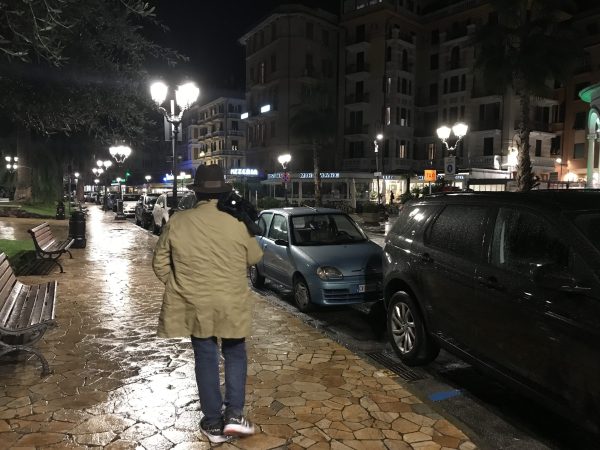 Most of the restaurants were Italian of course – we were in Italy now. The menus were full of pasta and pizza. We had already had our fill of refined wheat products and were hoping for vegetables and perhaps a different grain. There was a Chinese/Japanese restaurant that drew us in – Pechino. We ordered a lot! Avocado maki, two tofu dishes, one with mixed vegetables and the other in a spicy chili sauce and lots of rice. There would be plenty of time for Italian food later. We were staying here in Rapallo for 8 nights. 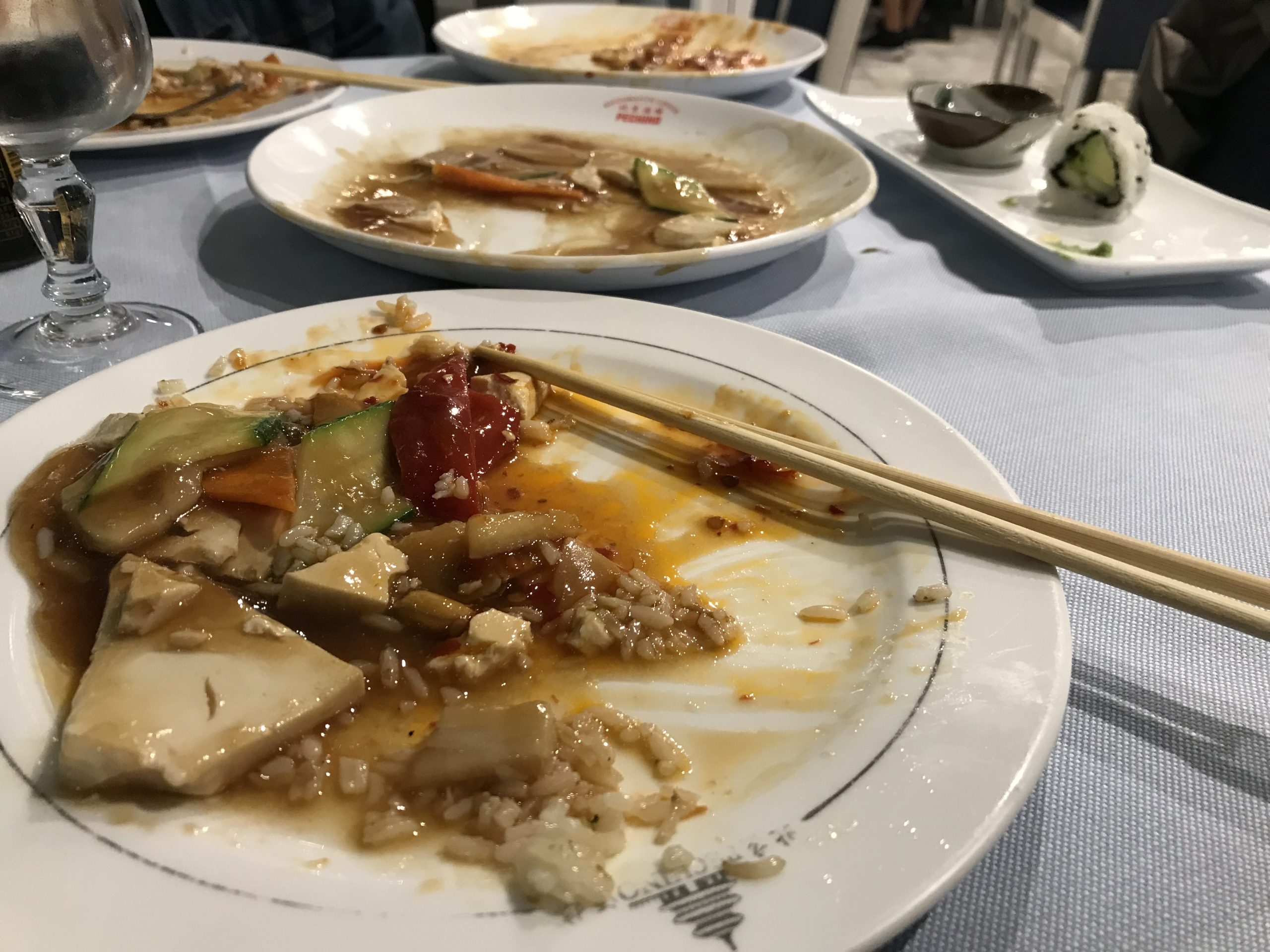