This was a very, very special day. And because there was so much activity and love and excitement, I forgot to take pictures of our very special meal. Scusi!

The day started earlier than expected. I was thrilled to have a room with a balcony overlooking the Ligurian Sea. We left the doors to the balcony open before going to bed. I wanted to sleep with the sounds of the sea.

It was late in September. I never thought there would be mosquitos! We awoke to them biting and buzzing. As a vegan, I don’t take killing bugs for granted. But it was time to act in self defense. We closed the balcony doors, turned on the lights and started hunting. Fortunately the walls were blank and white. It was easy to see those suckers. I smashed about 8 or 10 of them. Scusi!

But look where we are. It was worth it. 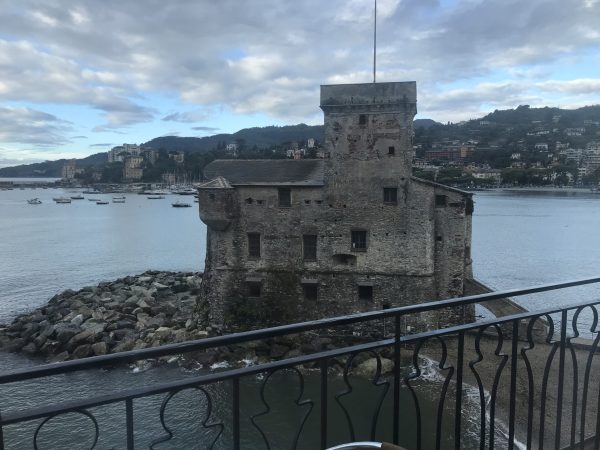 We got some more rest after that. Then it was time to get up and meet Gary’s sister Deb and brother-in-law, Al, who were staying in a nearby hotel. We were going to meet Gary’s cousin Vittorio for the first time! Deb and Al had met him some years back. We were all friends on Facebook. But today we would be meeting Vittorio, his wife Cinzia, and son Marco, and heading up to the tiny village of Santa Maria di Maissana where Gary’s father’s family is from. 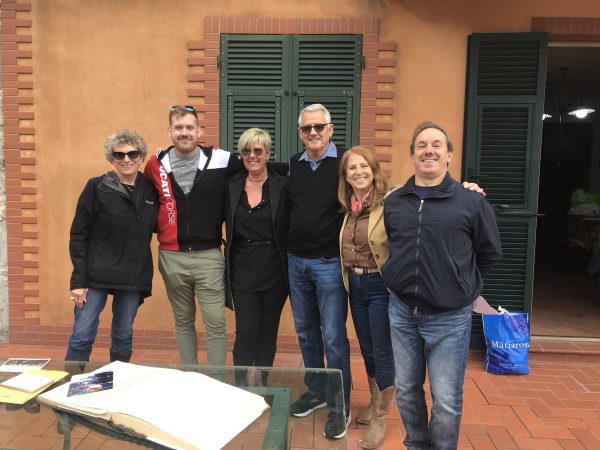 Of course they grow grapes! I was hungry and they were delicious. 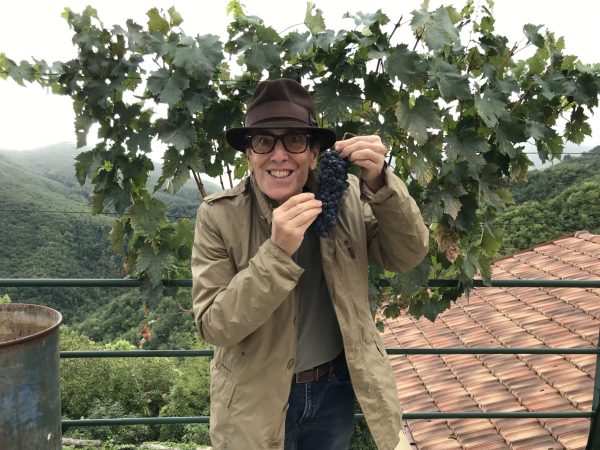 After spending time at Vittorio’s family house and hearing many stories we walked over to the cemetery where many of Gary’s relatives are buried. 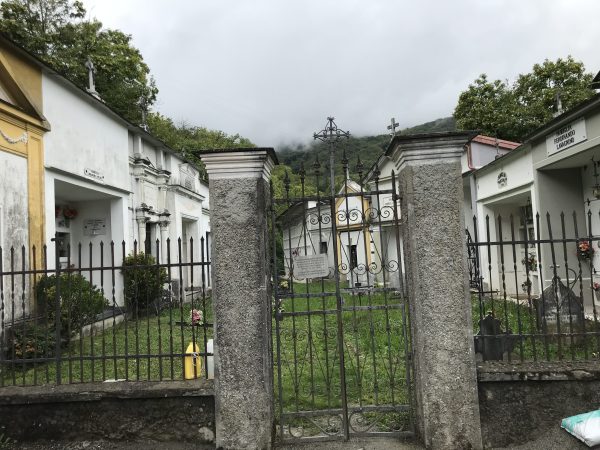 We went to the tiny square where the school and the church were. The school had a memorial plaque and the De Matteis were there. 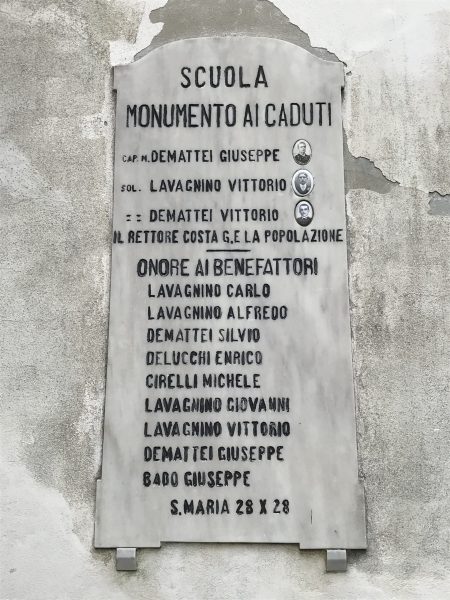 The church seemed very modest from the outside. 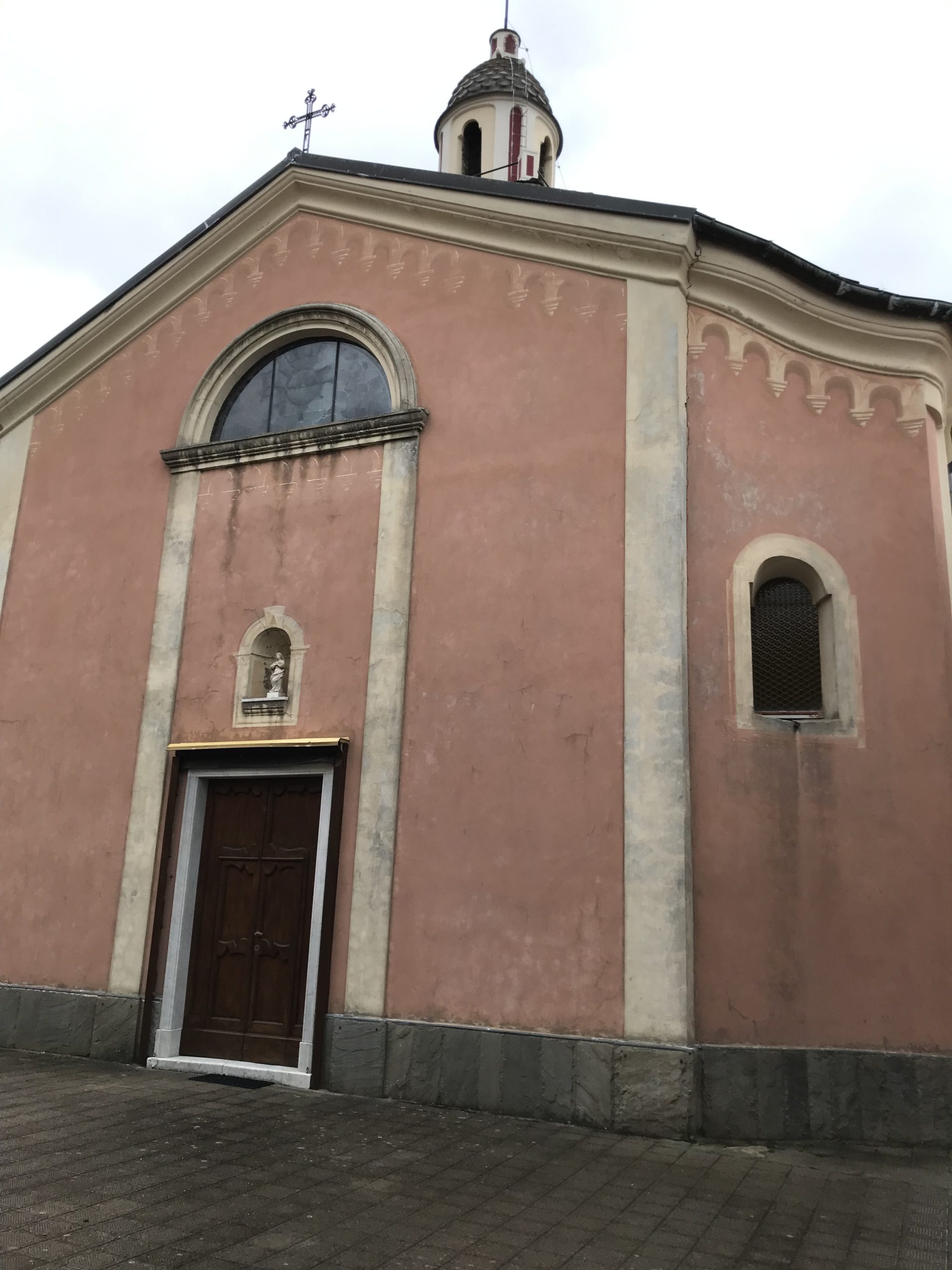 Then we stepped into the church, Vittorio had keys to the church. It was spectacular and very ornate. This simple tiny village has spared no expense on their house of worship. We learned that this was the church where Gary’s grandparents were married. 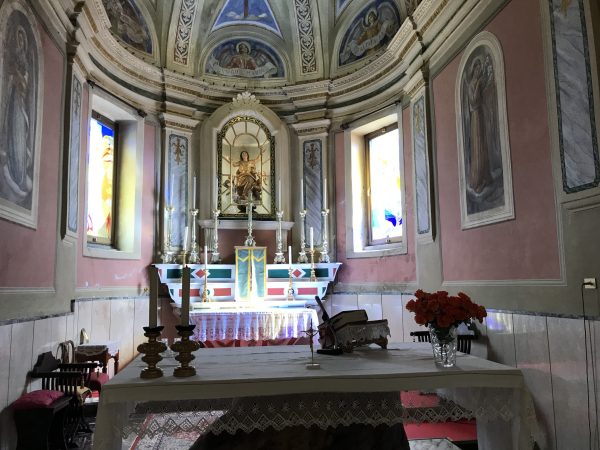 Deb speaks Italian and she was doing a great job going back and forth in English and Italian so we could all communicate. She had told Vittorio in advance about Gary and my vegan diet. We had no idea what was in store. Vittorio took us to a farm-to-table restaurant, Agriturismo Collina Torre, owned by a husband and wife team, Andrea and Daria. 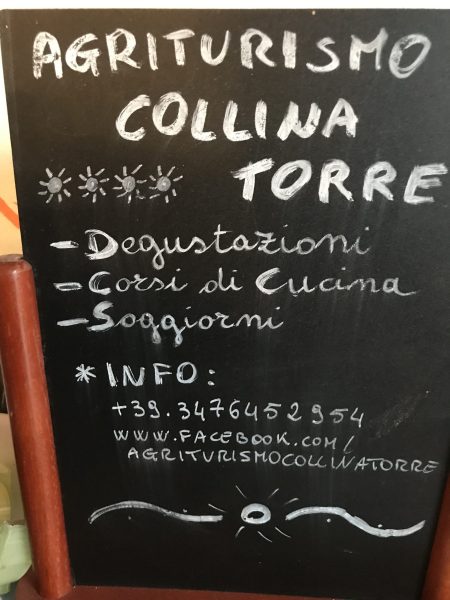 Once we were seated Andrea greeted us and brought us carafes of wine and baskets of bread. He brought us our first dish, Fritto Mista. Gary and I were served a variety of tempura style vegetables dipped in a light batter and fried in olive oil. There was also chunks of fresh tomatoes and some white beans on the plate, a local specialty. It was a tasty combination of hot and cold vegetables so I gobbled it up. I was still hungry and I didn’t think there was going to be more so I ate a few pieces of bread.

Then the second course arrived! Again, Andrea came out and presented all of use with our dishes, He explained in Italian what he was serving. He looked at Gary and me and told us about our meal which was different from the ravioli served to the rest of the table. Deb translated. He was so respectful of our vegan diet and serious about his cuisine and the way he presented it to us. We got homemade tagliatelle pasta, served perfectly al dente in a light tomato sauce. He made sure to let us know that Daria made our pasta “fresco e senza uova”— fresh and without egg.

Now I was feeling comfortably sated. Andrea came out with more food, and I was starting to panic. I would have paced myself had I known more was to come. This next dish was a simple risotto, arborio rice with some olive oil and a garnish of parsley. We don’t eat olive oil much at home and here it is especially delicious so these simple flavors were wonderful.

But then there was more. This time we were served sautéed potatoes with a side of farro with mixed vegetables. I love potatoes but there was little room left. I did my best.

Of course there was dessert. It was an ancient recipe from the region— a torte made with chestnut flour and raisins, slightly sweet, very lovely. Coffee and tea were served.

Andrea’s wife, Daria was the chef and she came out to greet us, we all applauded. 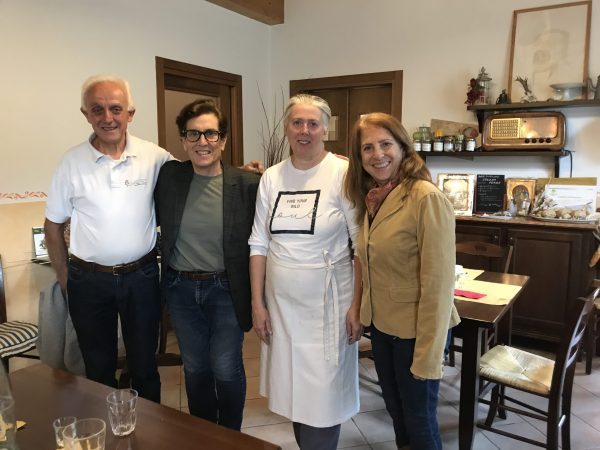 Our lunch lasted about three hours and the wine and mineral water flowed! Last but not least we were served liqueurs all made from different herbs grown on the farm. We had a choice of flavors, I chose the sage. 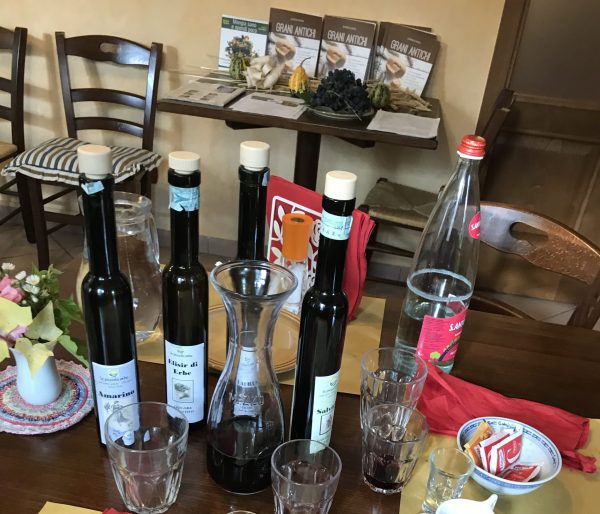 All in all, we were grateful for the consideration, care and presentation taken by Vittorio, Andrea and Daria to make sure Gary and I were well fed. And a big thanks to Deb for being our interpreter.

We got a tour of the hotel Andrea and Daria own on the premises. It was very charming.

After lunch, Vittorio drove us to a nearby town and showed us around. There were a few statues and memorials to different wars and we saw the names of more of Gary’s relatives in the De Mattei family who had given their lives as soldiers in past battles. 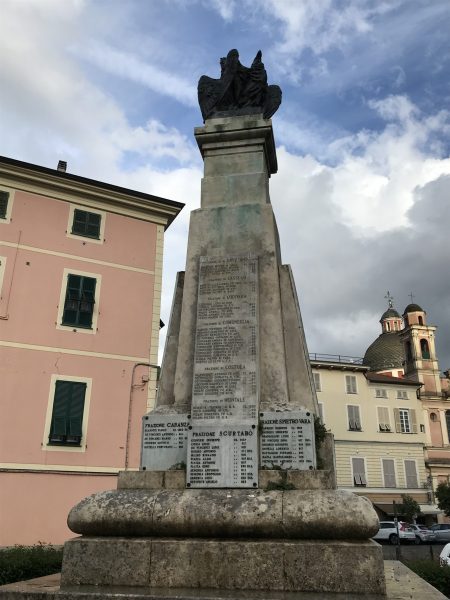 We peered inside an old castle. Deb and Al had stayed there once decades ago when all the hotels were full. It looked pretty scary! 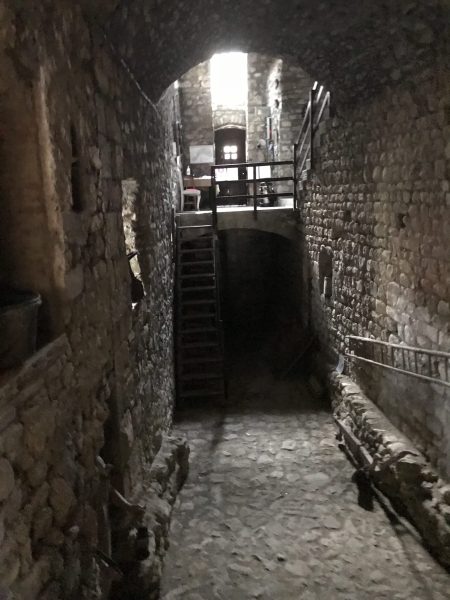 It was a long day. Vittorio brought us back to our hotel and we were ready to rest and prepare for another adventure tomorrow.