Our train was leaving Rapallo at 7:33am. After eight days, we were ready for our next destination and adventure in Nice. I made our last cups of tea in our beautiful room overlooking the sea. I don’t like wasting food and ate the remaining two melted vegan ice cream cones that were kept cool in the mini refrigerator.

This early morning was spectacular, calm and quiet. We arrived eight days before, in the evening, when it was dark and rainy. This morning was clear. We arrived at the train station. There is always that mild panic of finding the right train and climbing the stairs to the correct track. The plan was to take a short trip to Genoa, then another short trip to Ventimiglia and finally an hour long trip to Nice where we would arrive a little after noon.

In most stations there are two screens, one for departures and one for arrivals. Leave it to me to be searching for our train on the arrivals screen! Fortunately there was an attendant selling tickets behind a screen. She verified our train departure. Then I saw the departure screen with our train. Relief!

Once up by the track, I needed a bathroom. I thought for a brief moment I could wait until the train arrived but then knew I couldn’t. Plus train bathrooms are not easy to use and are typically unpleasant. I am using nice words here! Gary saw the sign for the restrooms which were on the same platform. I was off. The restroom was clean and stocked with everything I needed. Fortunately for me, fiber-filled vegan, my download was quick. I was in and out in no time at all.

The first two trains were small local ones, no first or second class cars. They were all the same. The first leg to Genoa was easy. Then we waited for the train to Ventimiglia. We were getting good at this.

On the train to Nice I took out some of the remaining food I had brought along for a quick snack, Avocado on Radicchio. 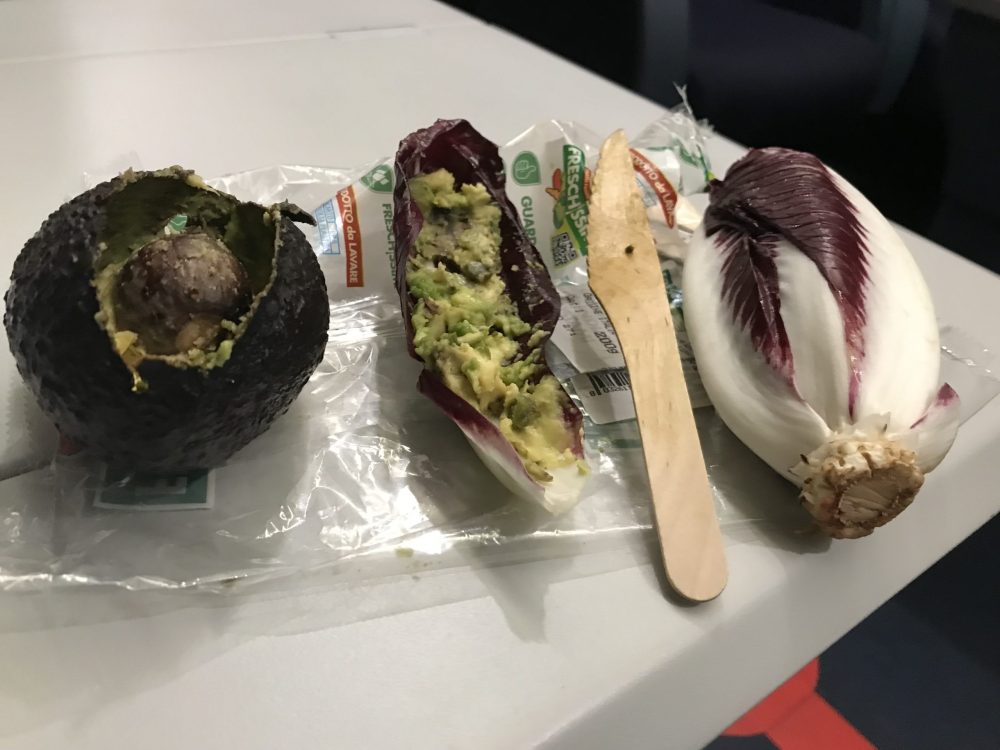 Arriving in Nice was like entering the city of Oz. The most magical place of all. We got off the train and walked through the lively city to Old Nice where our hotel was. This city by the sea is stunning. We had a 20-minute walk with our luggage to the hotel and it was a little challenging but the sites made it worthwhile. Entering Old Nice was the best part. Ah, just another charming, French town, with gorgeous ancient buildings that have been renovated to accommodate 21st century living. Everyone was eating ice cream! It was just past noon and it seemed that ice cream was a basic necessity at this moment. I was using the maps function on my phone and yet, we could not find our hotel. Nor did anyone in the vicinity that we asked knew where the Hotel Rosetti at 1 rue Sainte-Réparate was located. We were getting a bit grumpy at this point. We carefully retraced our steps at the plaza of the Cathédrale de Sainte-Réparate, surrounded by two or three gelato stores and then we found it! There was a small simple sign by an unadorned door that said Hotel Rosetti. We rang the doorbell. For a moment, I expected a head to pop out saying, “who rang that bell”. Instead, a very pleasant man opened the door and welcomed us inside. He helped us up the first set of stairs to the reception. How did we find this place? It was GORGEOUS, renovated with contemporary finishes while preserving the excellent bones of the original architecture.

Our room was very small, but efficient and beautiful in its elegant simplicity. We unloaded our bags, relaxed for a short while and then set out to discover Nice. Our first find was thrilling. Very close to the hotel was Caju, a vegan eatery with two charming proprietors, Julien and Callie. Gary was settling in, feeling French came natural to him. 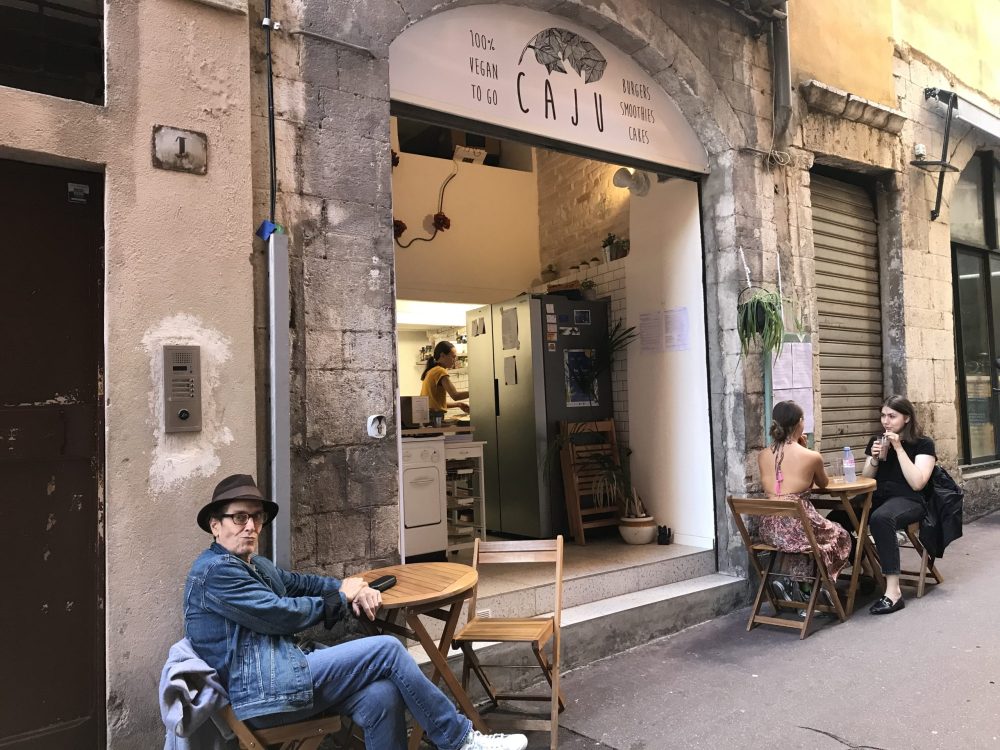 Julien charmed us with his welcoming presence, curiosity, and tales of his traveling adventures with Callie. He took our order and later served us our delightful meal of smoothies and burgers. 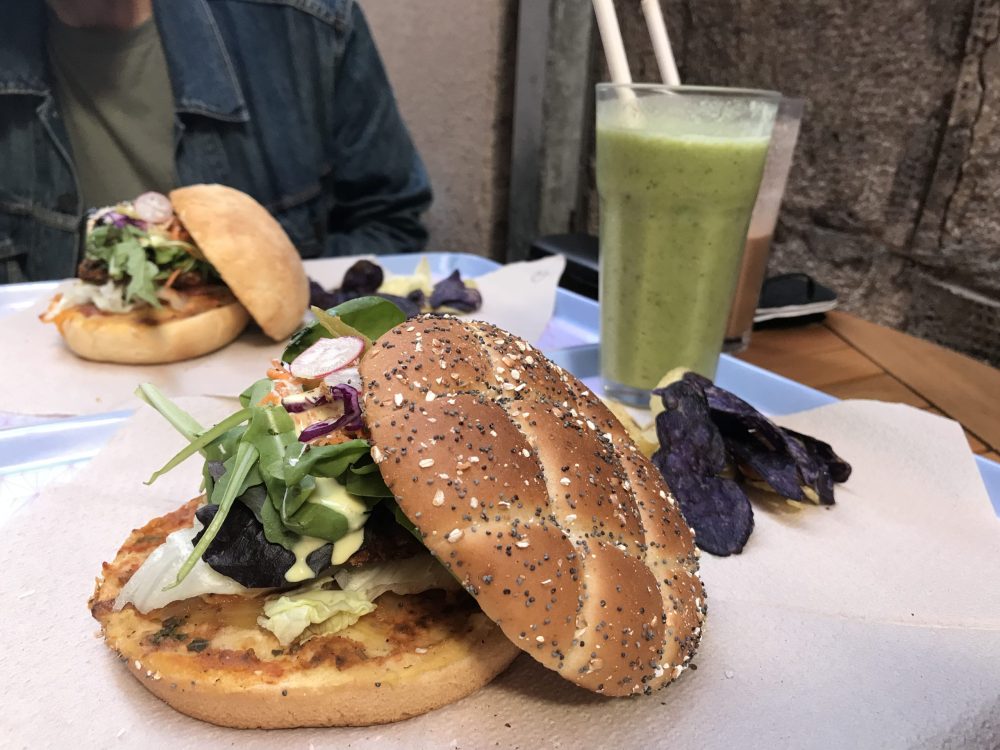 It was inspiring to meet this dynamic duo and I hope we cross paths again in the future. I had contacted them later for a possible interview on the IT’S ALL ABOUT FOOD podcast but they were closing up in early November to vacation and reopen in the spring. Stay tuned. 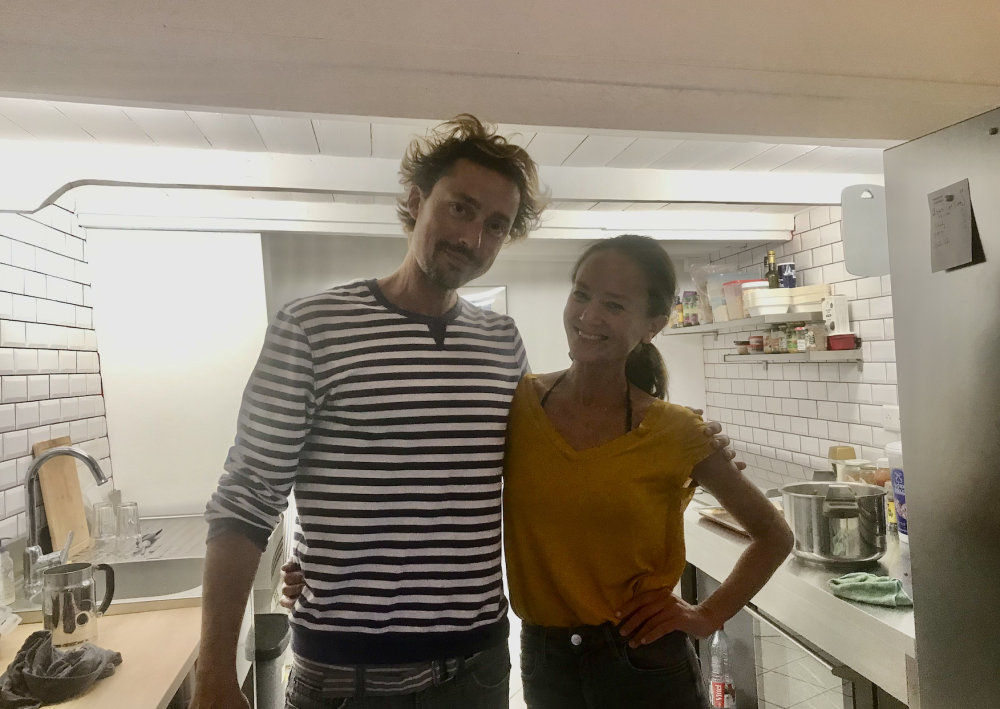 After lunch it was time to walk. The beautiful beach… 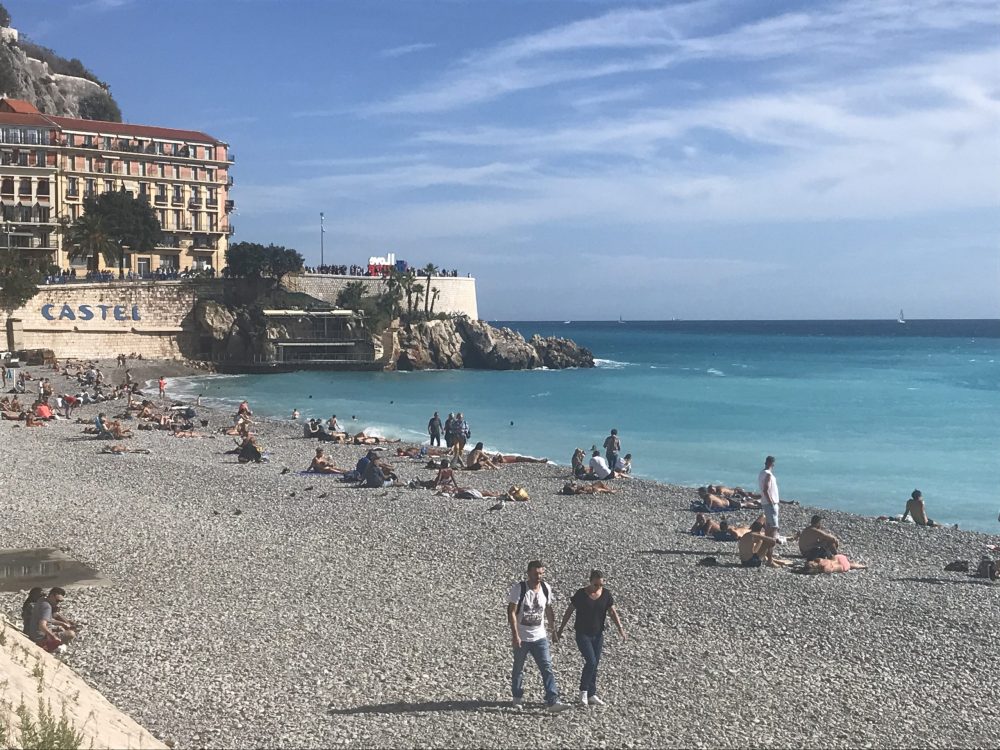 Lots and lots of yachts. We saw the Sweden’s Götheborg, the largest wooden ocean-going sailboat in the world, which had just arrived days ago in the port of Nice on September 29. It was open to the general public but we preferred to view it from afar. 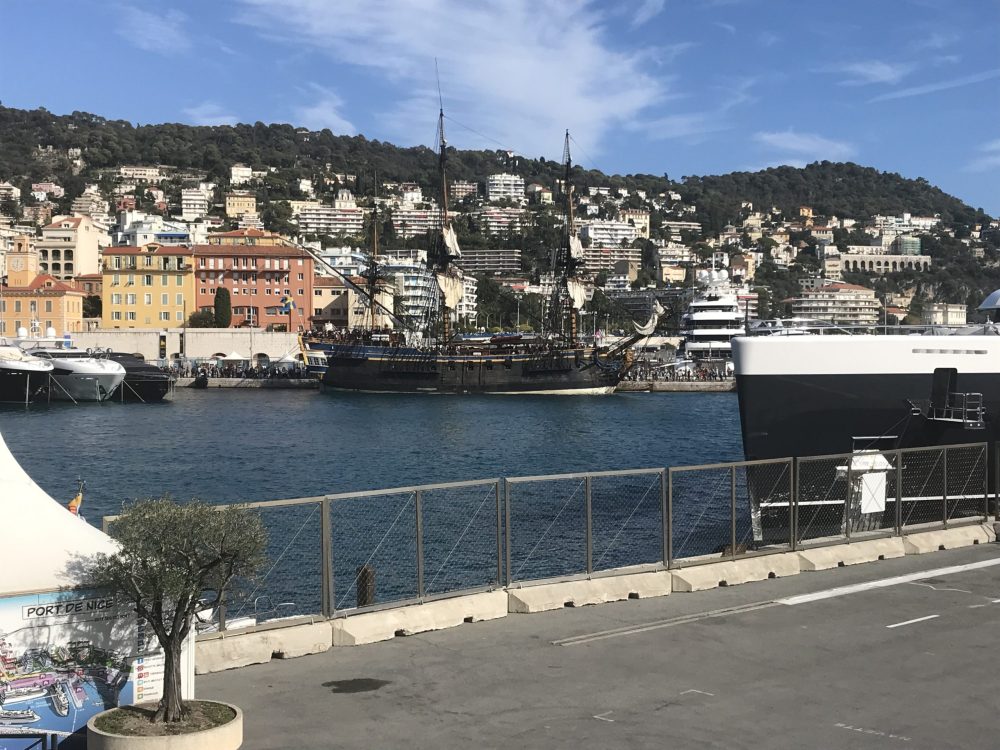 We stumbled upon the “Nissa La Bella, Tresor de la Riviera,” A photographic exhibition honoring the splendour of the Nice region, from yesterday to today. It was running from May until the end of October. It was splendid, tailor-made outdoor scenography, made accessible to as many people as possible with 52 large format panels, presented on Place Garibaldi. We spent some time there, admiring the panels and reading the descriptions that went with them. 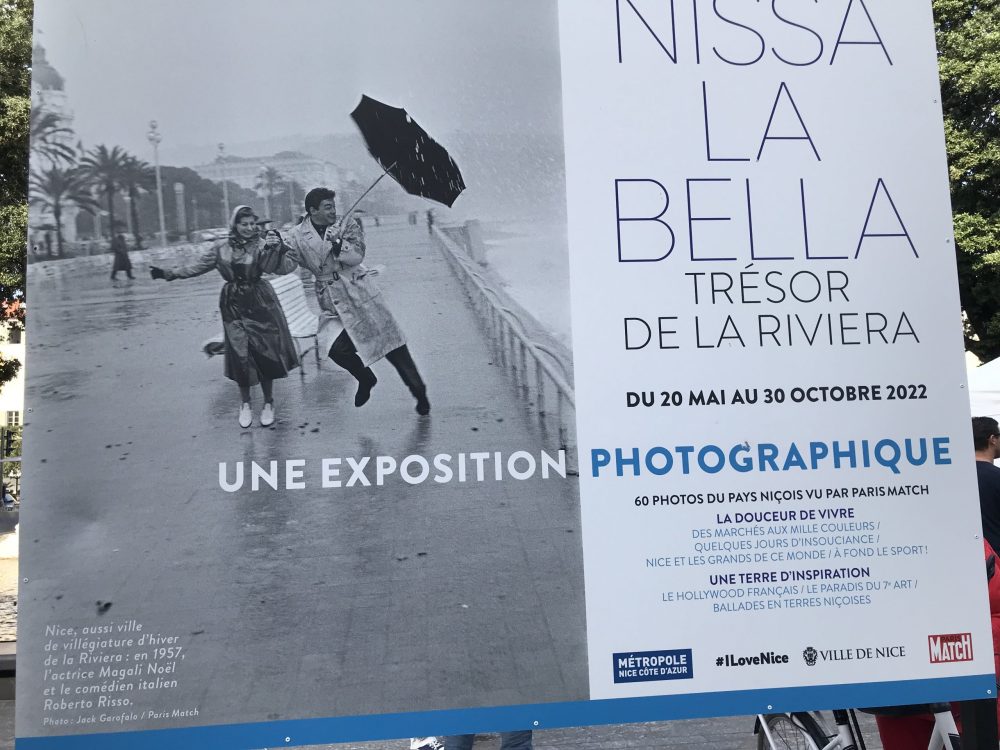 Around 4pm it was tea time! We stopped at Hobo Coffee, a little cafe near the hotel, clearly designed to satisfy the tastes of tourists. I had a Matcha Latte with Almond Milk, and Gary got a mint tea. They offered soy milk, almond milk and oat milk! It’s such a joy to satisfy my vegan desires here in Europe, only thirty years after I lived in France, when no one here knew what a vegan was. 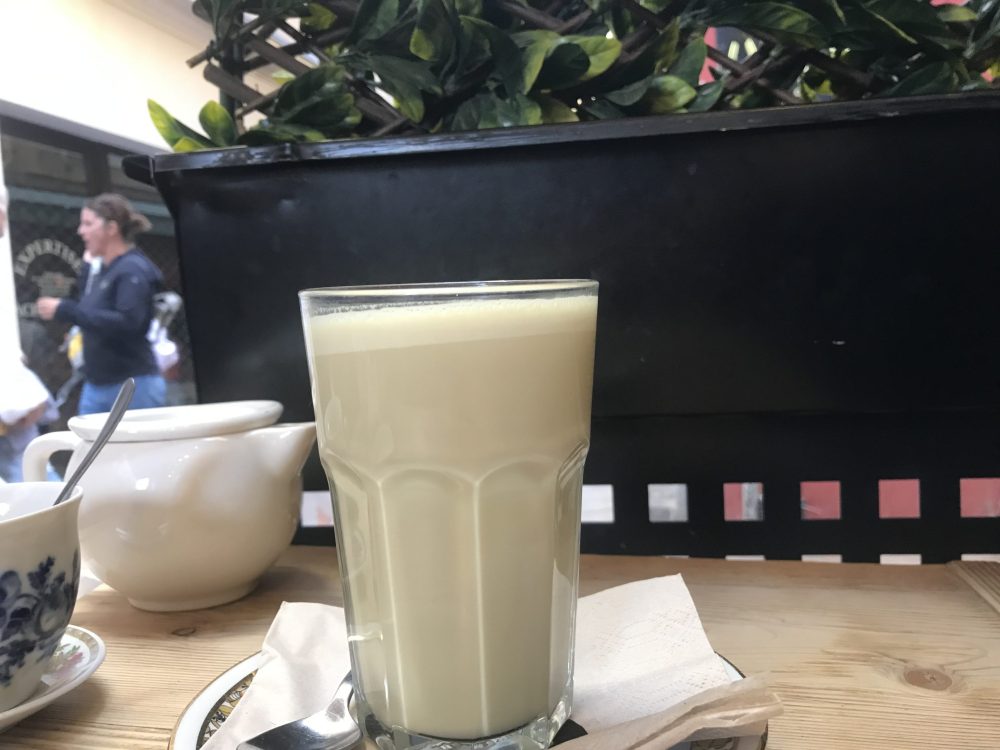 It was time to rest and rejuvenate in our lovely little hotel room. 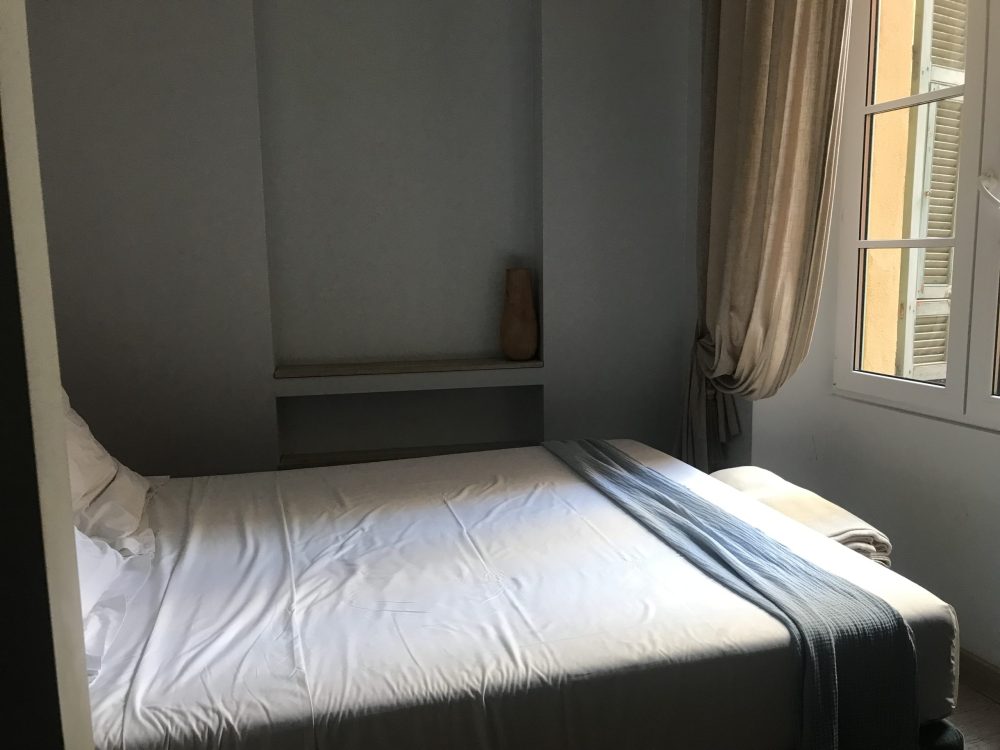 There is a patio terrace that the hotel guests can enjoy. 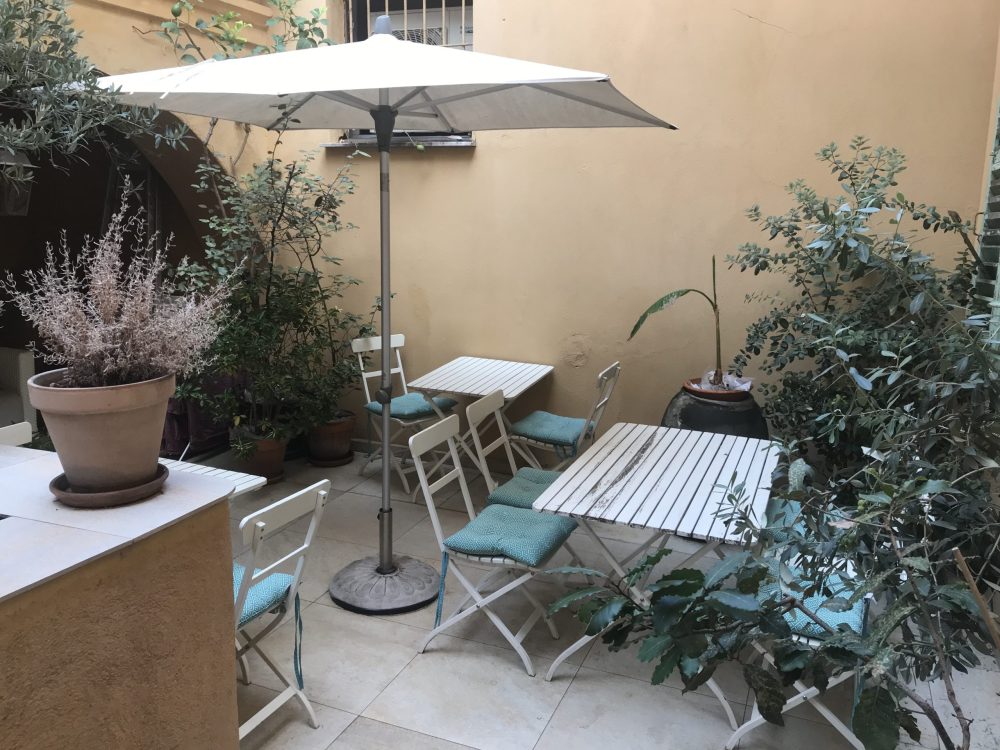 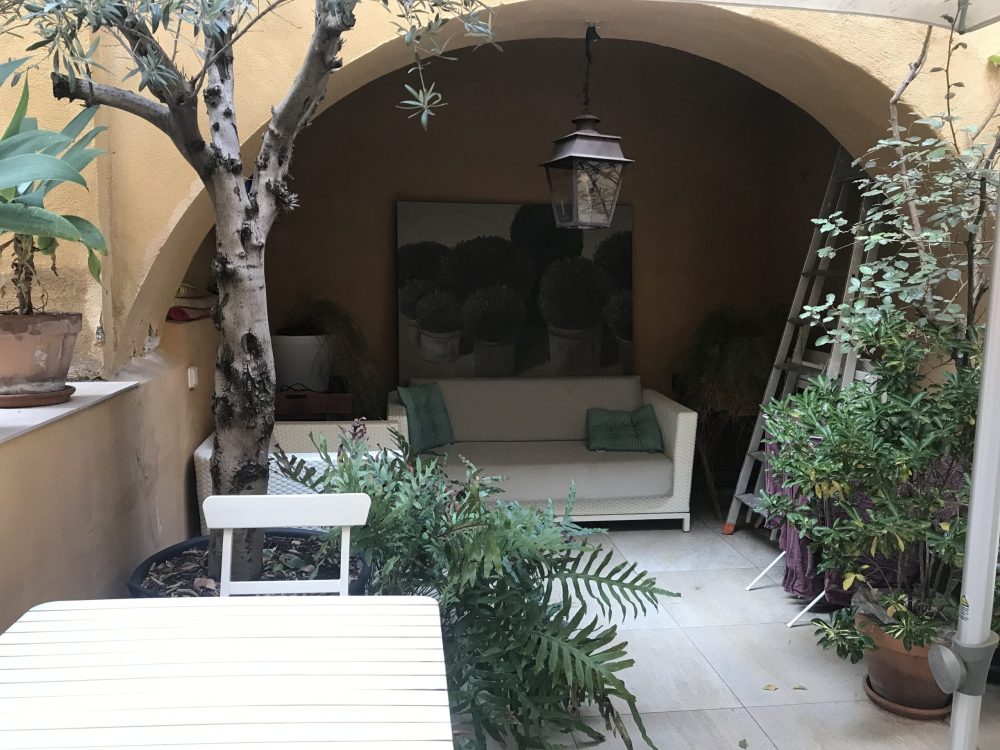 I wanted to get out one more time before the day ended. I checked HappyCow.net found a vegan restaurant that looked interesting, Utopia Restaurant Végitalien, a short 10-minute walk from the hotel. It was after 8pm and already dark. We left the hotel, and crossed the Boulevard Jean Jaurés, through the Promenade du Paillon. It was a bit sketchy at that hour, walking through the park which was not well-lit. We got to the other side at the Avenue Félix Fauré and then down a small street to the restaurant. It was packed! I confirmed we did not have a reservation. Quelle Horreur! We were given a look that I could only translate as “how could you think of coming here, to this amazing restaurant without a reservation?” Still determined to get a table we stood at the entrance door waiting. A gentlemen motioned to us at a small table that they were leaving. Hurray. We waited. And we waited. The two servers (the owners perhaps?) had plenty to do and we were not the priority. Another table opened up and was cleared. Now there were two tables. Finally we were seated. Gary wanted something simple and light, which didn’t really exist. He chose the Cauliflower Steak, with a romesco sauce. 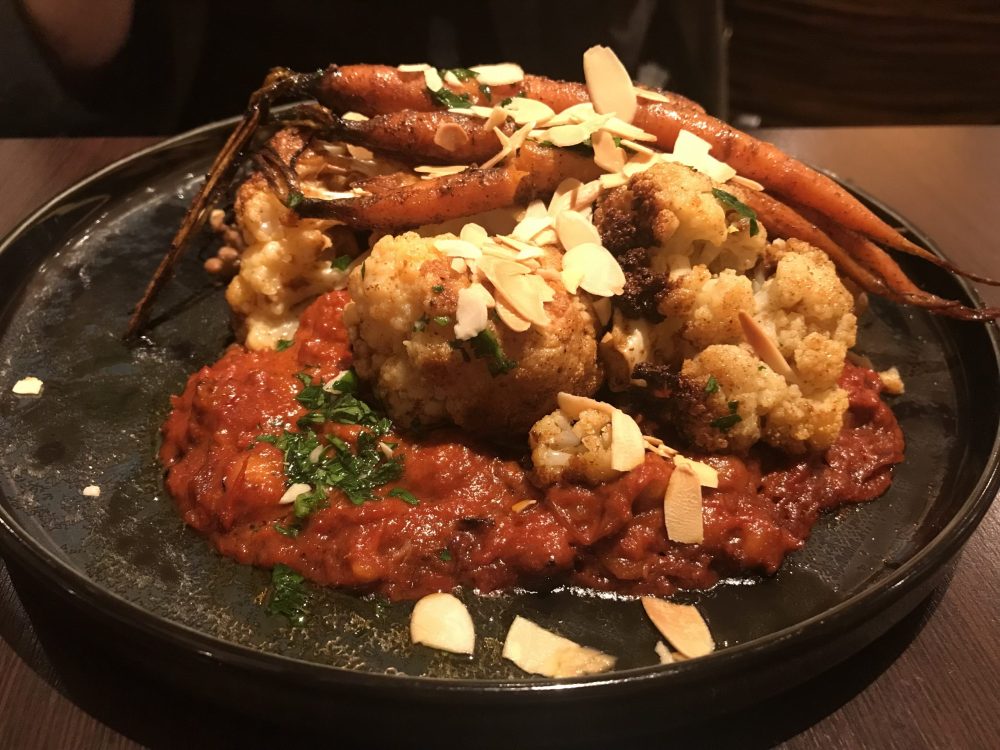 I went for the Faux Filet, the seitan steak with grilled potatoes. 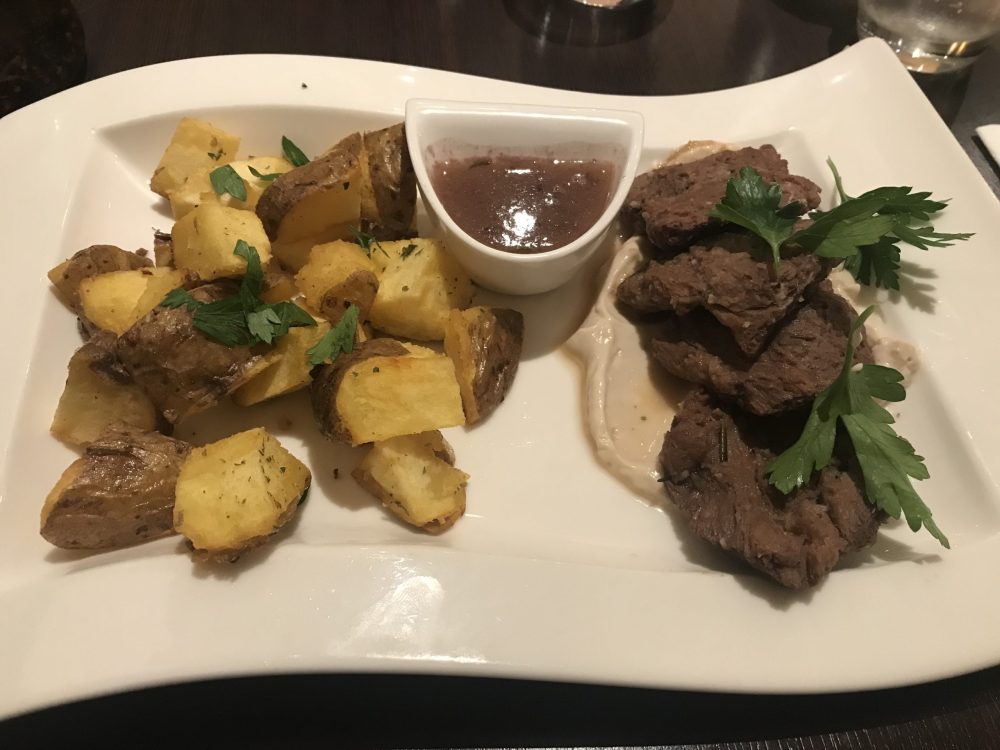 There was an enticing dessert case in the front of the restaurant. During our long wait to get a table we had plenty of time to stare at the offerings. Gary chose a slice of one of several cheesecakes. 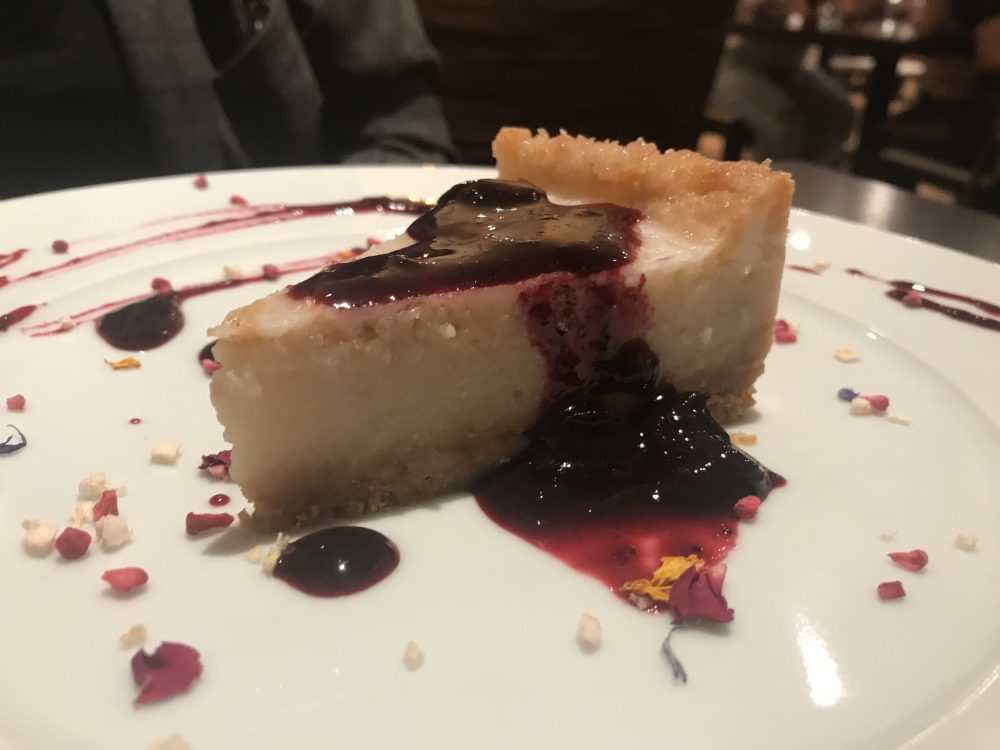 I wanted to try the Tiramisu. I have had several vegan tiramisus on this trip, all different. I am enjoying the discovery to find out which I like the best. Although the photo does not do this dessert justice, this was probably the best and the most authentic, with the ladyfingers, buried in the cup, dipped in bitter coffee, with a sweet chocolate custard on top. 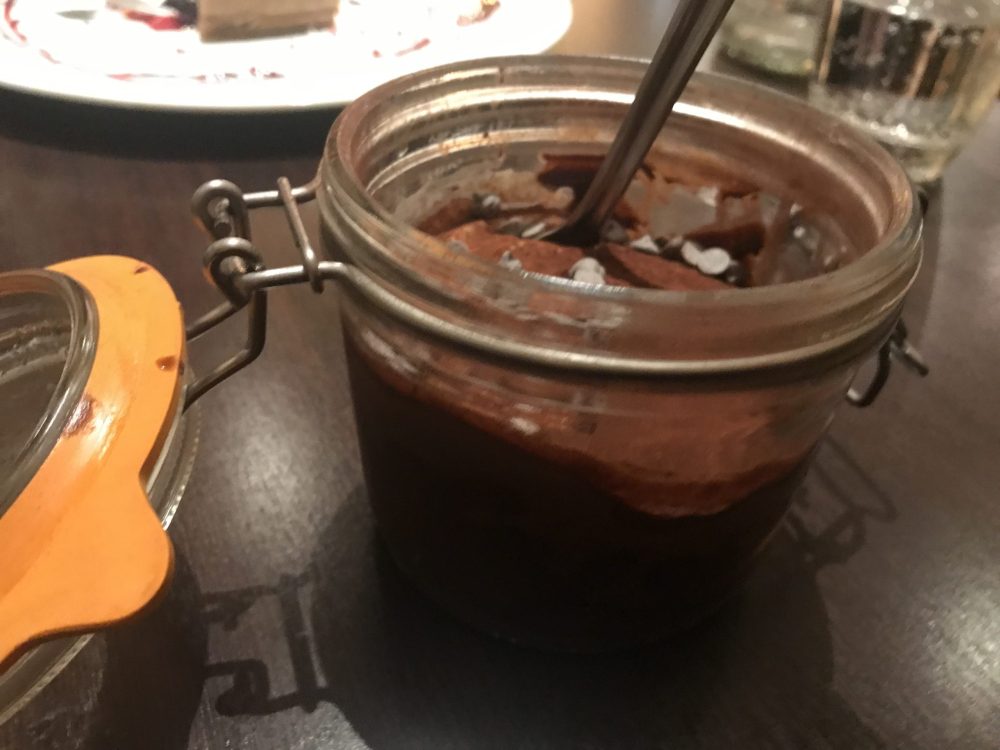 We walked back to our lovely hotel, quite sleepy and satisfied. Nice is so much more than just nice!