We had big plans today. Our friends Mehmouna and Guy, who live in Nice, offered to take us on a drive, to see the sights, all the way to Menton, France and back. We were to meet at 10:45am at the Place Jacques Toja. While we waited, we learned about the actor Jacques Toja: He was a French actor born in Nice in 1929 and died in 1996. He was a resident, member and then General Administrator of the Comédie-Française, best known to the general public for the role of King Louis XIV in the Angélique saga. He is also the founder of the Jacques-Toja Foundation for the theatre.

They found us right where we were supposed to be and the adventure began. We drove east along the French Riviera in the direction of Menton. We had not gone very far when we stopped for our first photo. Everything was beautiful. 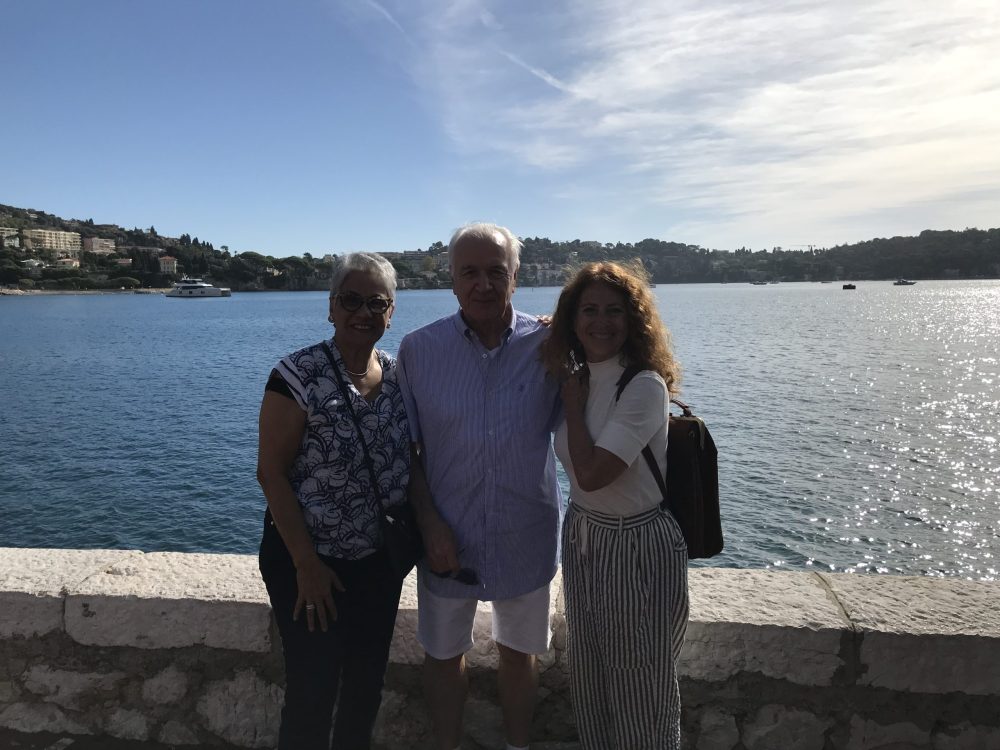 Next photo spot was the Villefranche Sur Mer. 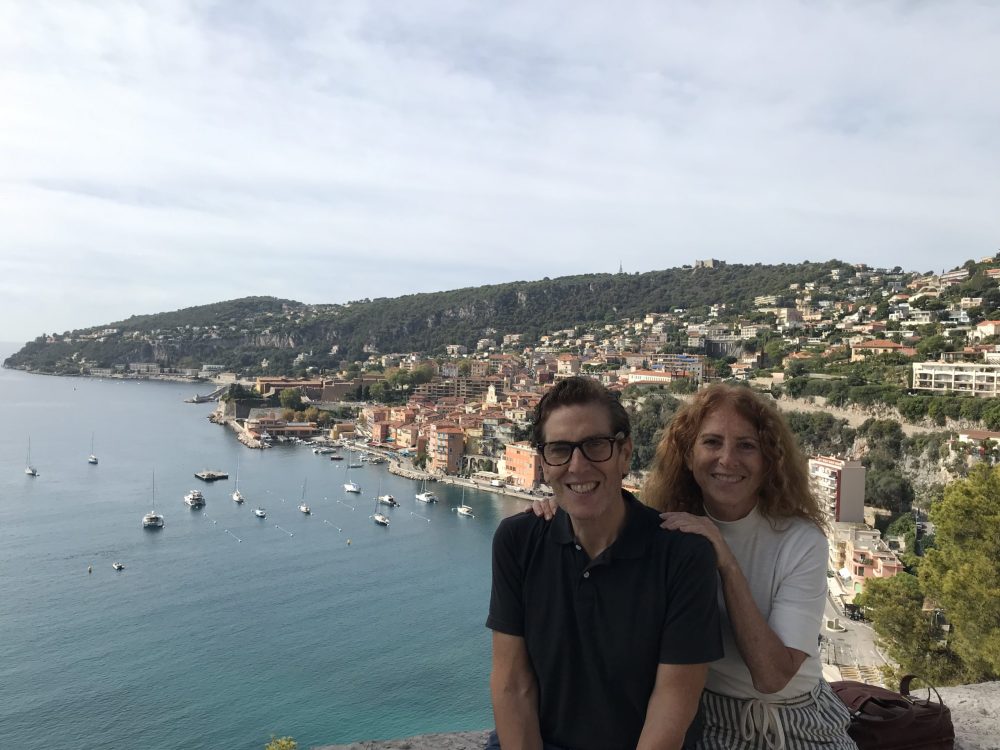 I wanted to see Monte Carlo, in Monaco. In the late 90s I was selected to participate in an opera competition there. The traffic was terrible and we drove very slowly through the city. Mehmouna was driving and she tried hard to accommodate my wish. We got close to the Place du Casino and caught a glimpse of the Opera House but it was impossible to stop. We moved on to Menton. 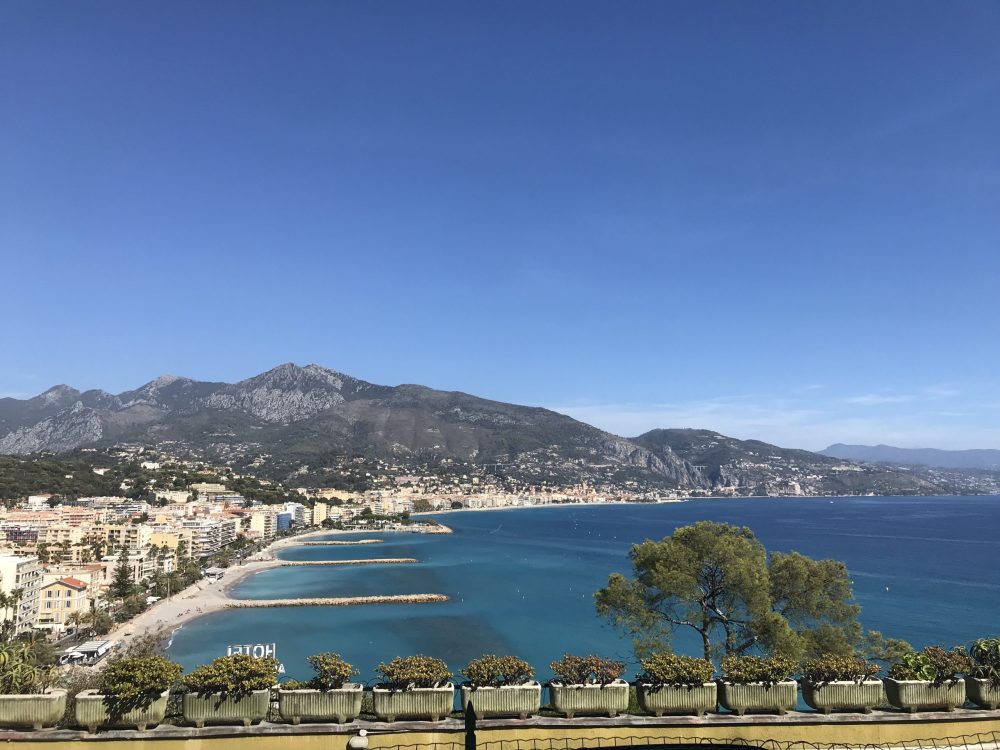 It was time to park the car and find a place for lunch. As we walked along the Promenade du Soleil there were many restaurants that had tables along the water. We wanted to go to one of those! We read some of the menus and it did not look promising for vegan options. But we spoke to one server who promised us that we would have some fine choices. We got seated at Le Tagliatelle. We both ordered vegan versions of the Salade Nicoise. We didn’t get what we asked for. A typical Salade Nicoise has green beans and potatoes on the salad along with anchovies and eggs that we would omit. Our salads were very good, but there were no green beans or potatoes. 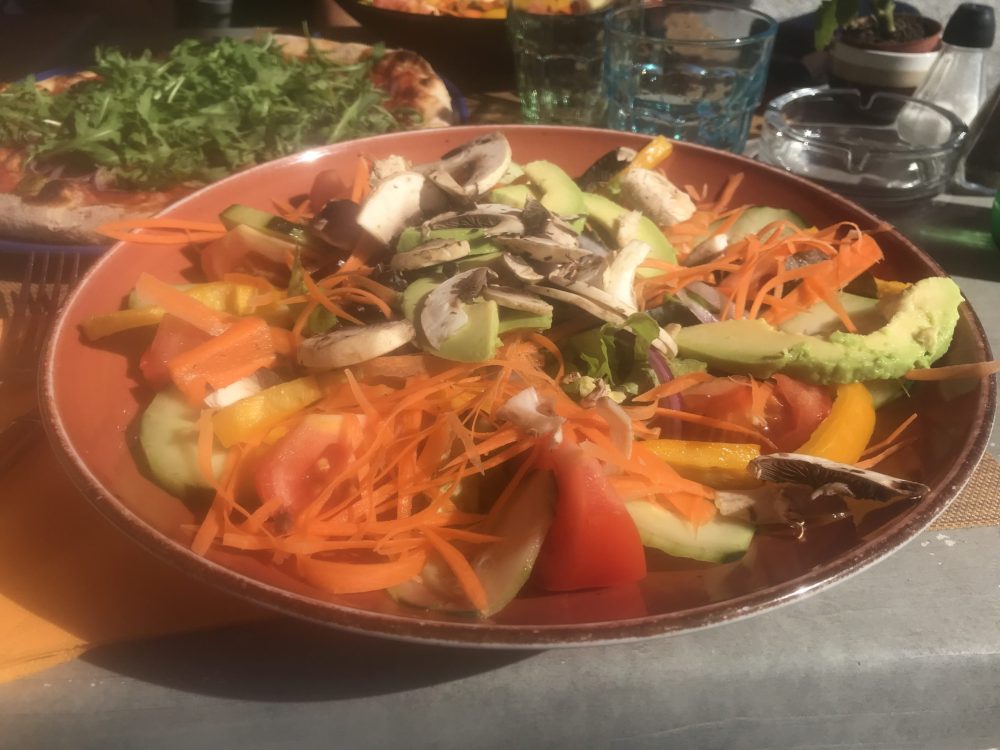 We shared the vegetarian pizza, which had no cheese and was loaded with a pile of arugula. 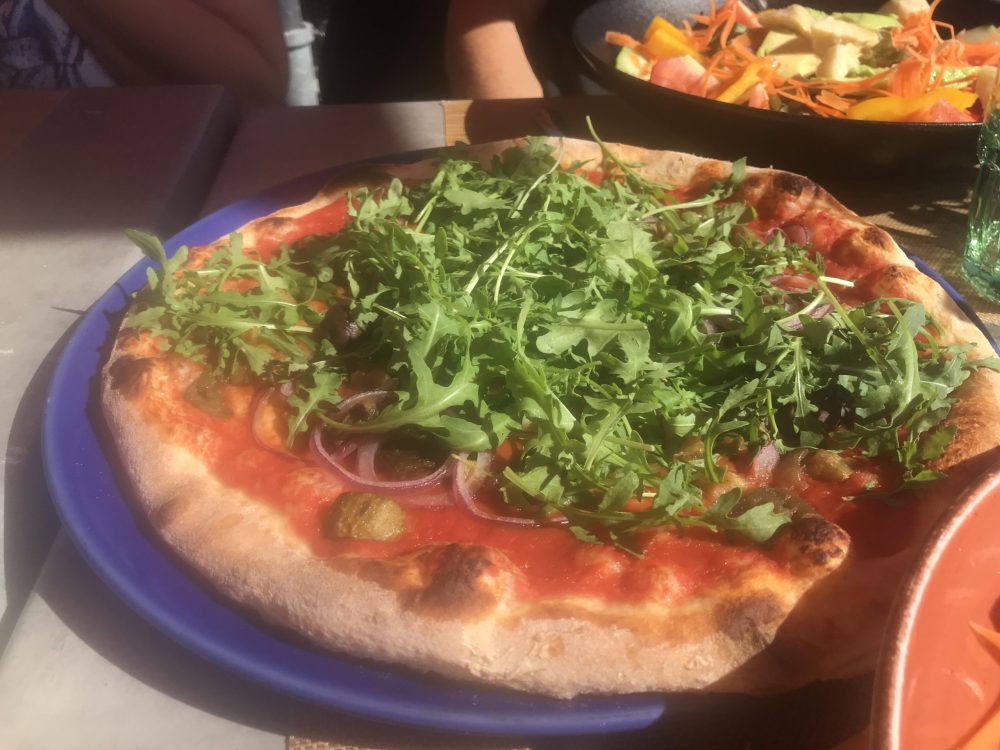 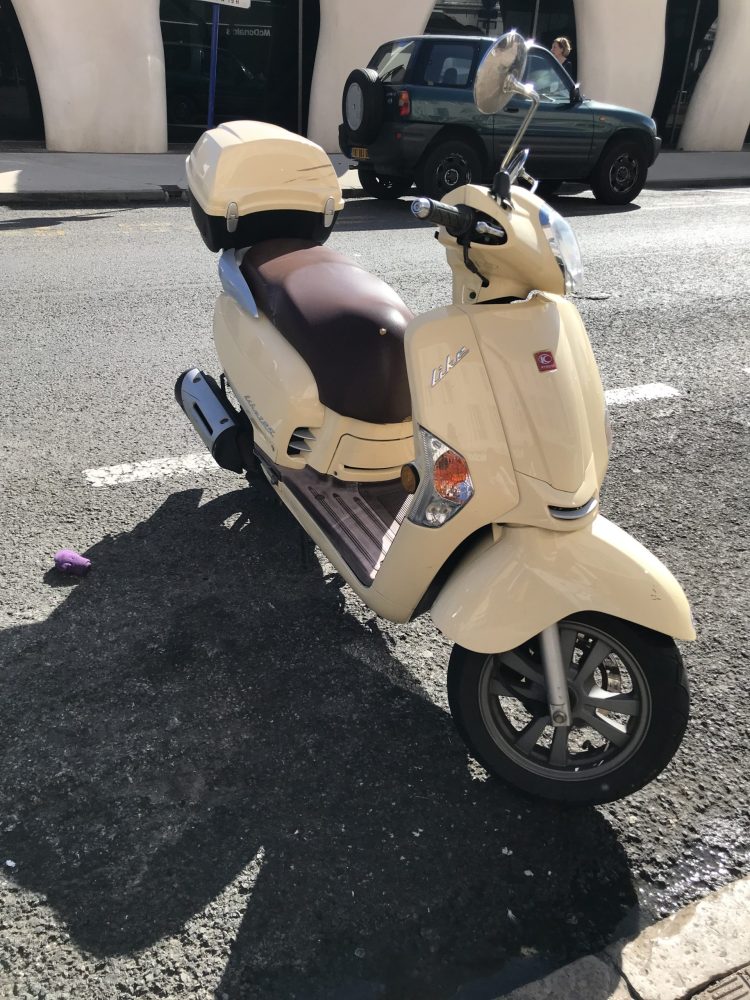 We passed by the Jean Cocteau museum. This museum, which open in 2011 had been dedicated to Jean Cocteau, the French poet, playwright, novelist, designer, filmmaker, visual artist and critic. He was one of the foremost creatives of the surrealist, avant-garde, and Dadaist movements; and one of the most influential figures in early 20th-century art as a whole. We learned about how the museum’s basement had been badly flooded back in 2018 during a bad storm. The museum is right next to the shore. Unfortunately some works had been stored in the basement and they were damaged by seawater. The museum was closed to try and restore some of the damaged works. It was still closed when we were there, four years after the flood. Unfortunately there’s been no news about reopening. 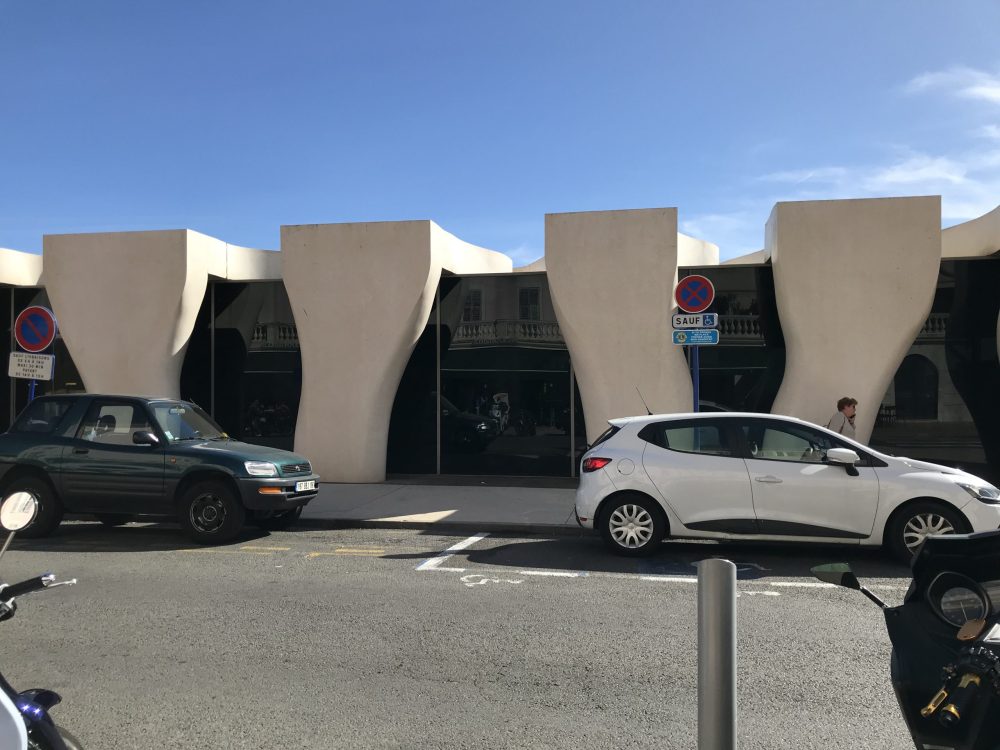 We walked around the town a bit and stopped here in front of the Hotel De Ville (town hall). Inside is La Salles des Mariages (the room of marriages) with artwork on the walls and ceilings by Jean Cocteau. 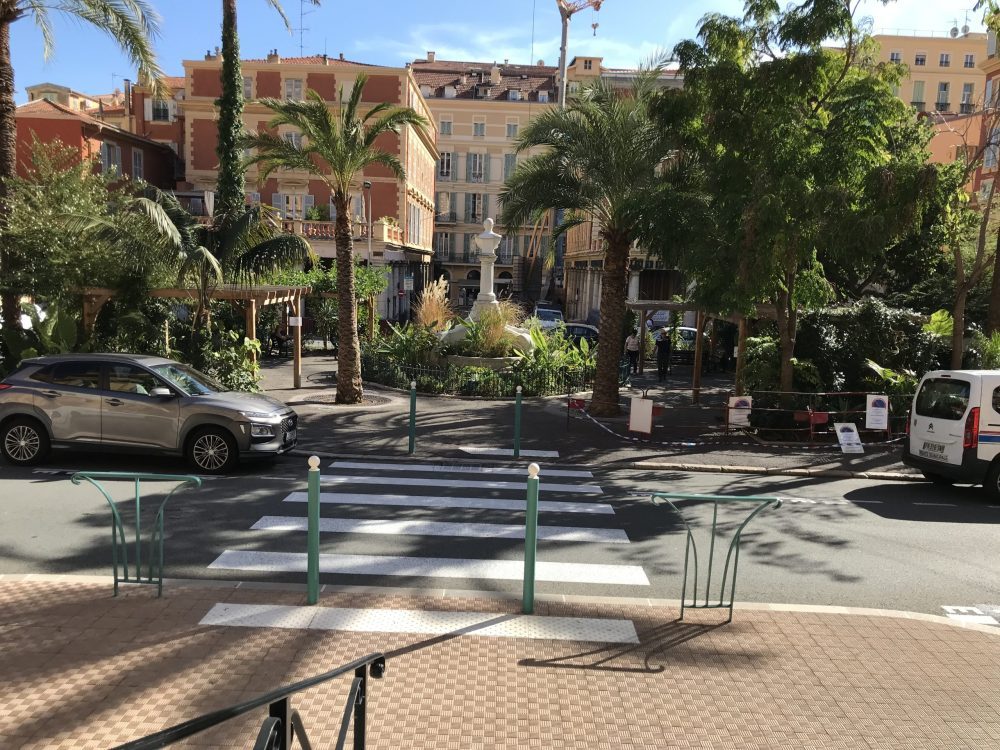 We had seen a lot and were ready to return to Nice. The drive back was just as lovely, seeing everything from the reverse perspective.

We said our goodbyes to Mehmouna and Guy. Once on our own again, we did a lot more walking around Old Nice and just beyond. We passed by a store with many kinds of teas. My nose was in heaven, smelling all the sweet fragrances from the dried fruit, flowers and teas in the different selections. I bought two small bags of loose tea to give to friends in Aix-En-Provence, our next stop on this magical tour.

Socca is a thing here. There are small restaurants that sell socca, the garbanzo bean crepe. We stopped at one and asked for the ingredients. It was indeed vegan. Hurray! We would have liked to try one or two but we were not ready to nosh.

Back at the hotel, I did start thinking about dinner. Checking out HappyCow.net once again, I found the restaurant SAJ, a vegetarian restaurant with Mediterranean vegetarian recipes inspired by Greece, Cyprus, and Lebanon. It was the perfect place to end our too short time in Nice. The servers were so nice. One suggested the lunch menu which they were still offering for dinner: pumpkin soup with sweet potatoes, ginger, lemon and grilled eggplant, red bell pepper, fennel, salad and zaatar (Lebanese wild thyme) on organic flatbread. We both ordered it. 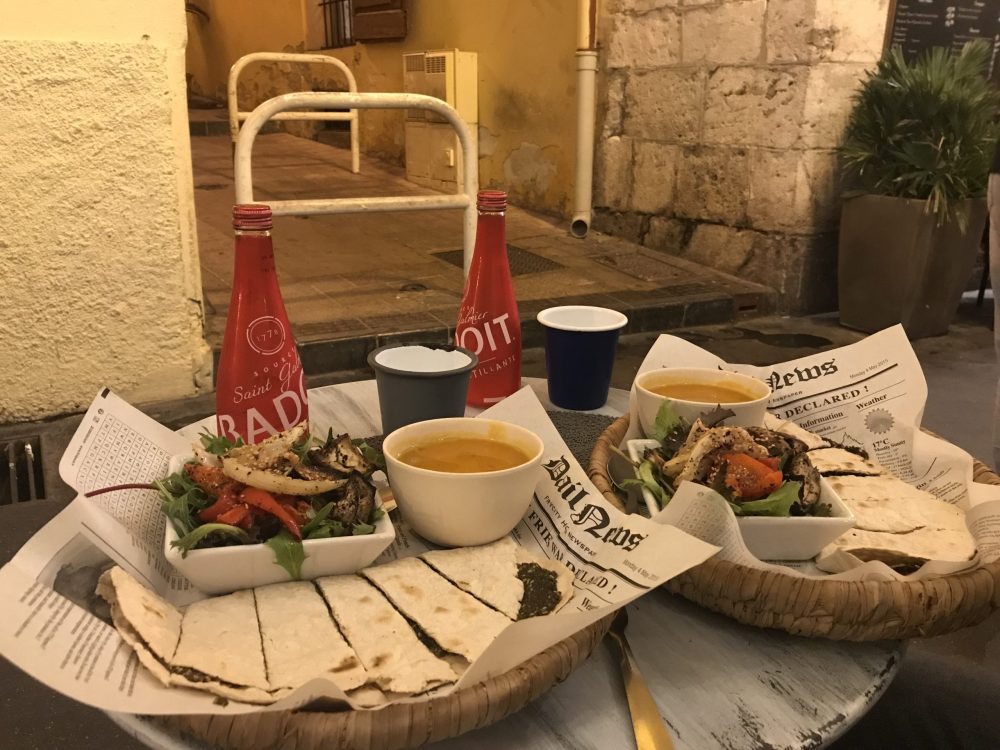 This spot was beyond charming! 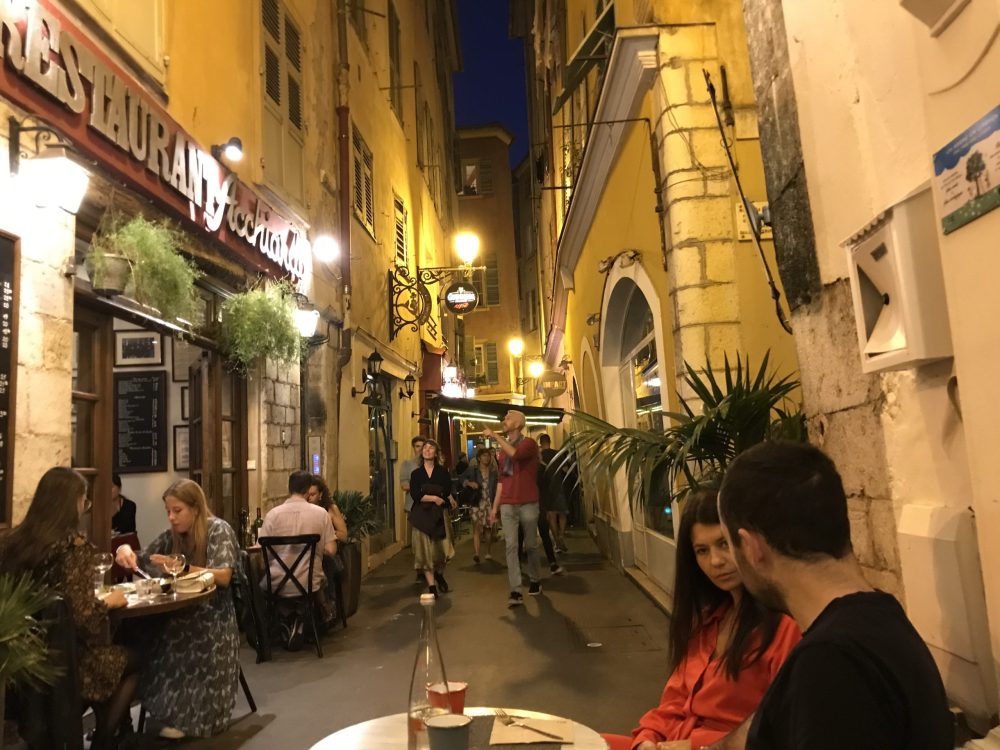 I was so happy there. 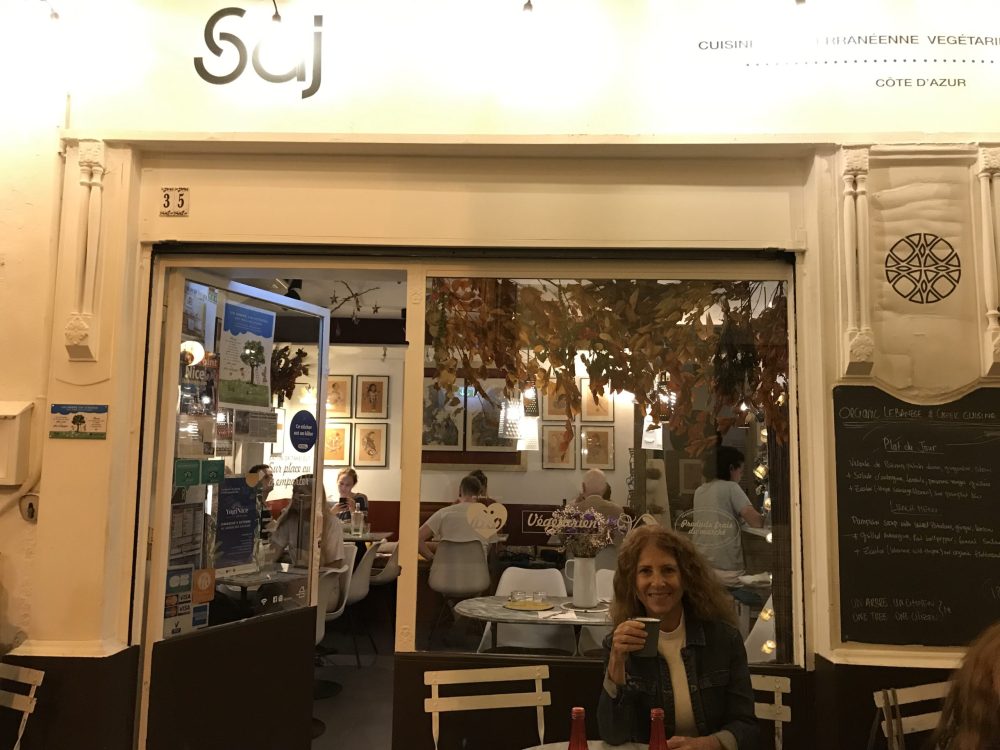 Yes, we would have dessert. The chocolate cheesecake and the ice cream were vegan. We got them both. 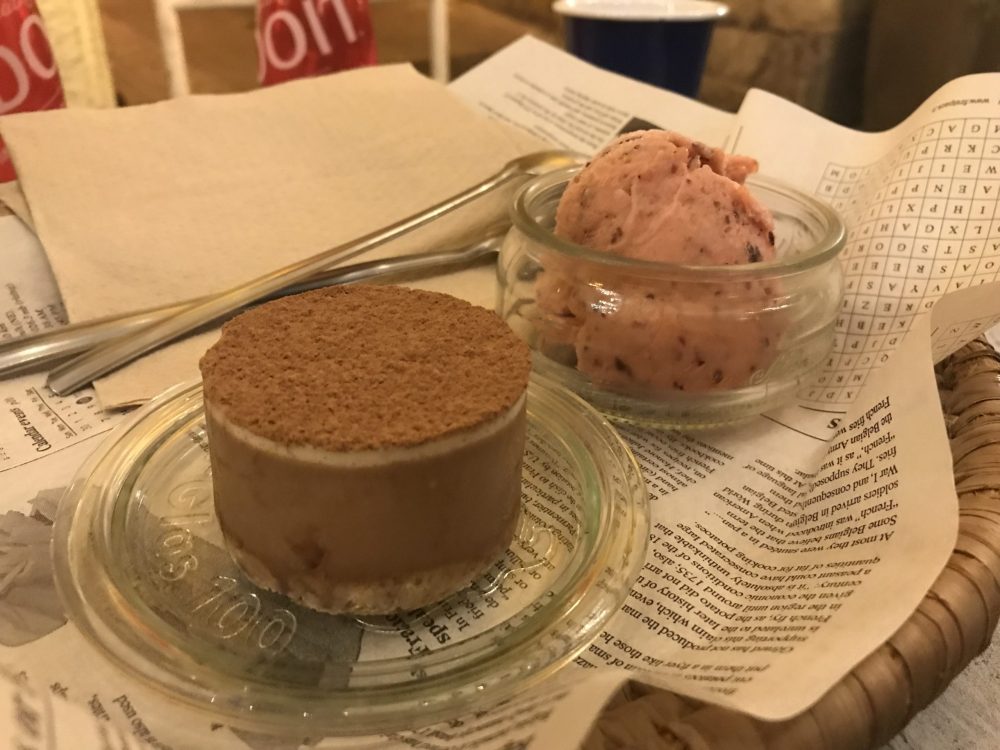 One of the servers recommended a special tea that they had. We were easy customers and we ordered it. It was a very light ginger lemon tea. A nice drink to end our last evening in Nice. 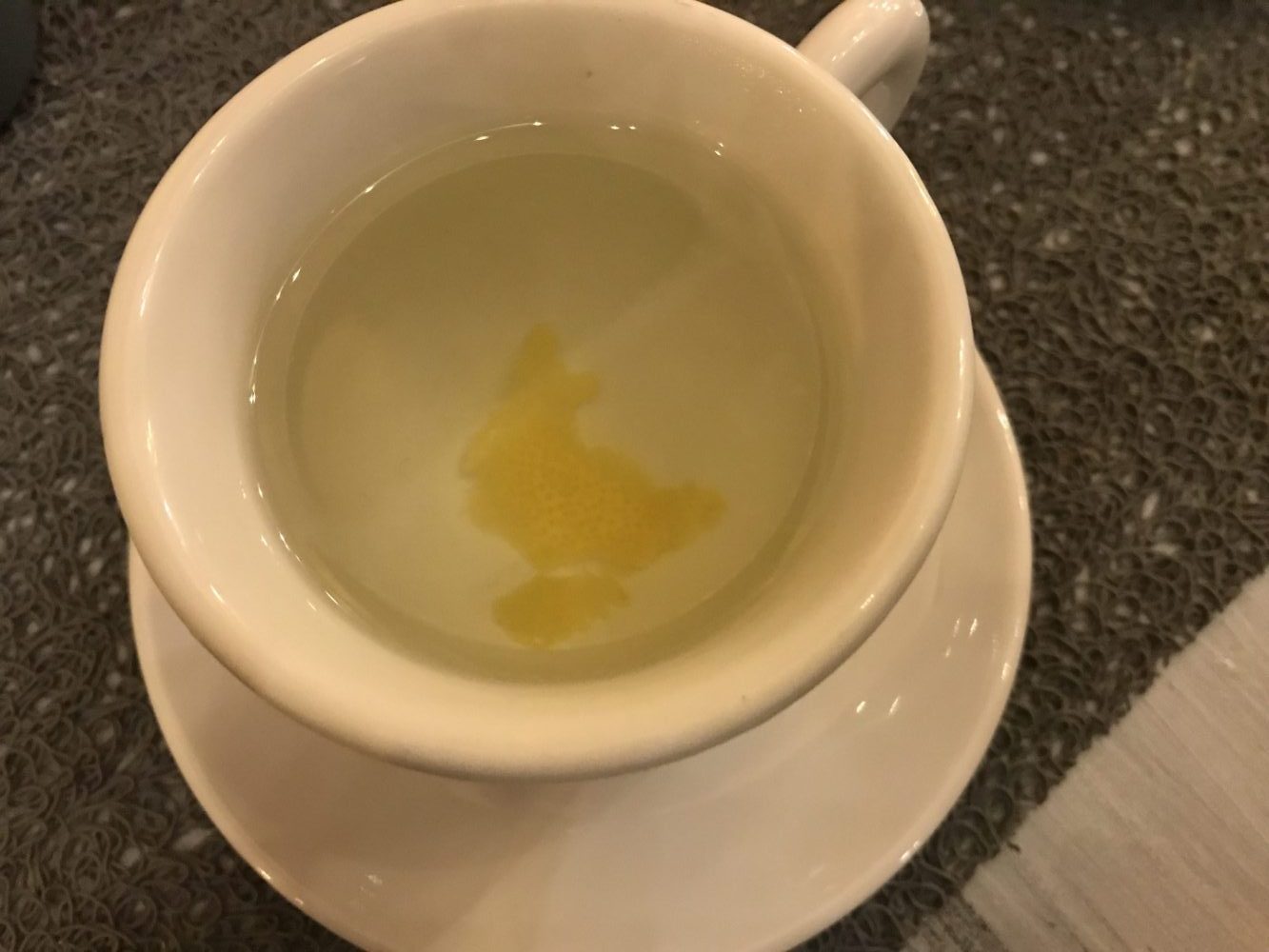