It was a short but full time here in Nice and we would be leaving on the 11:53am TGV to Aix-en-Provence. We’d arrive in Aix after 2:30pm. This schedule worked brilliantly allowing us a luxurious morning in Nice and then a satisfying afternoon and evening in Aix-en-Provence.

I couldn’t wait to dine at Amour V. It is a plant-based pastry shop established in Nice in August 2018, with vegan, raw and gluten-free creations by owner Camille Berton. I knew that we would love it, and we did. Everything is well thought out and done with beauty and care. Just look at the sign on the counter glass case displaying the pastries. Yes, everything is vegan, organic, and also gluten-free, hand made and for sure, full of love. Whether read in French or English, Amour V speaks my language! 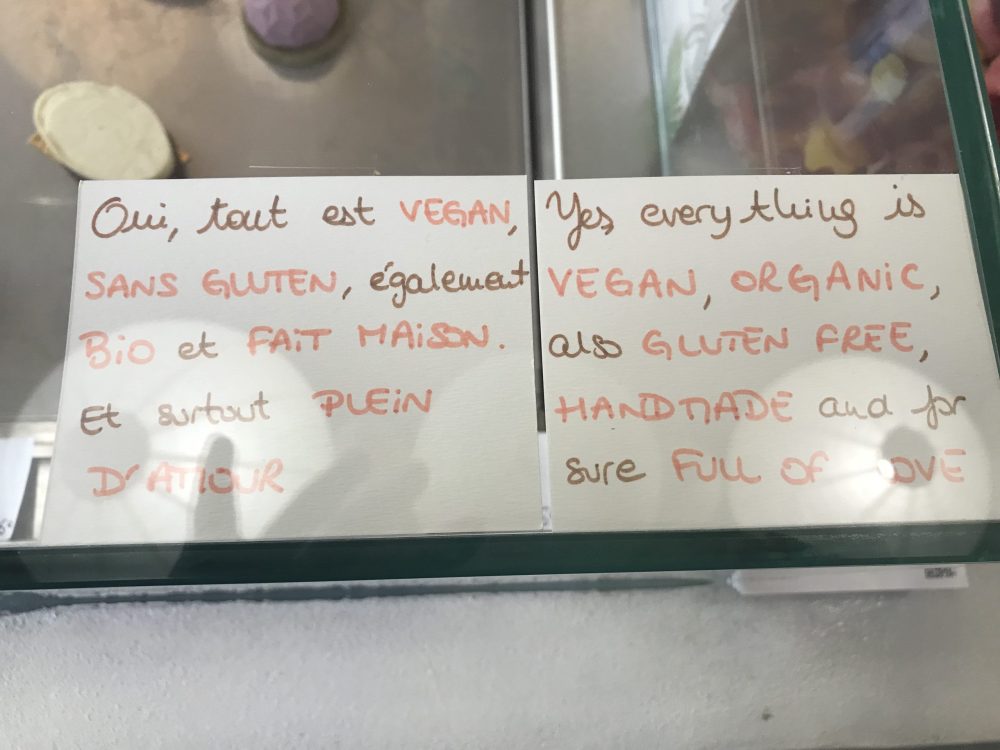 The ambience is light and airy. 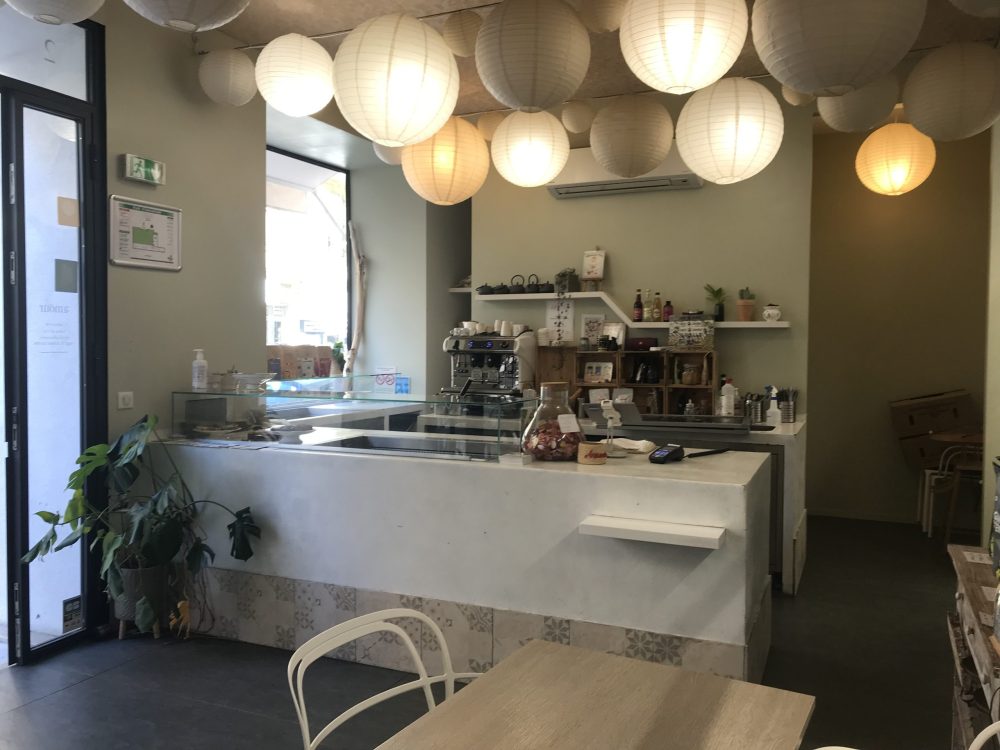 Little sweet tables to enjoy your pastries, coffees, teas, and delicious dishes. It is welcoming for you and your companion or if you just want to treat yourself to a lovely, quiet moment. 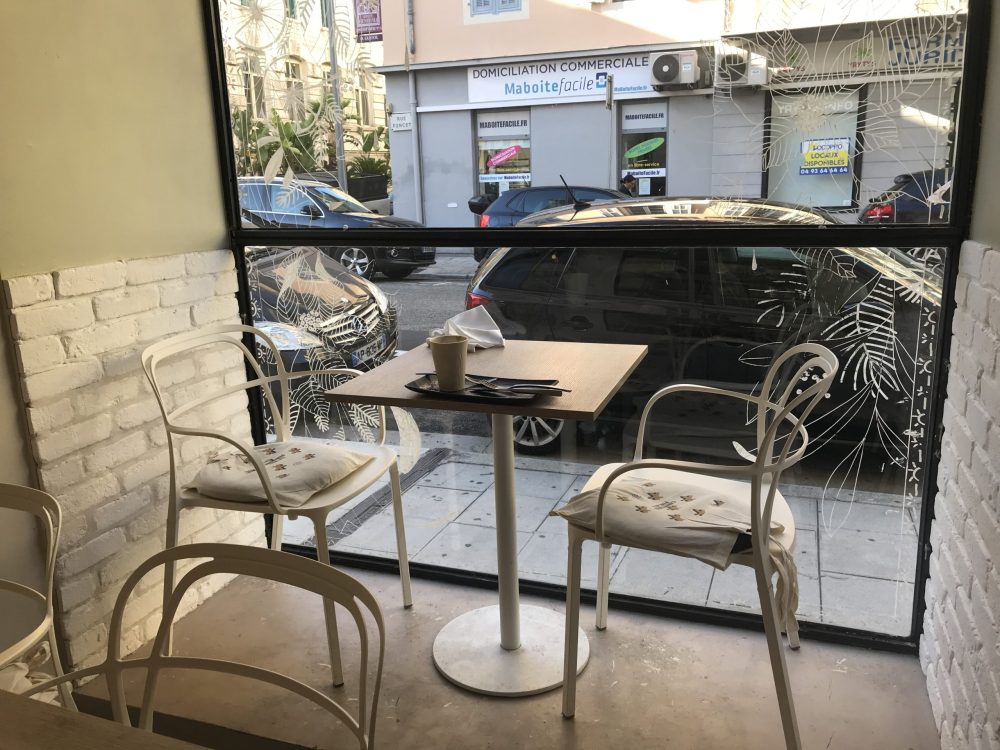 We had checked out of our hotel and walked here. Fortunately it was on the way to the train station, but I would have stopped here no matter if it wasn’t. We piled our bags next to our table and got ready to indulge ourselves with a perfect breakfast. 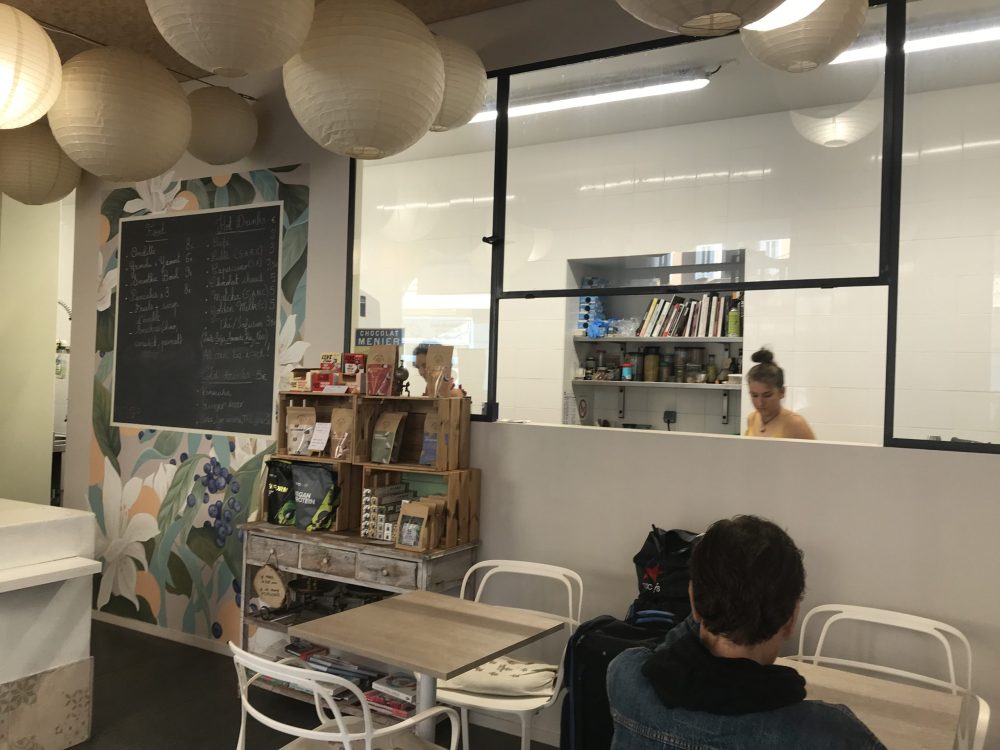 Check out the menu! 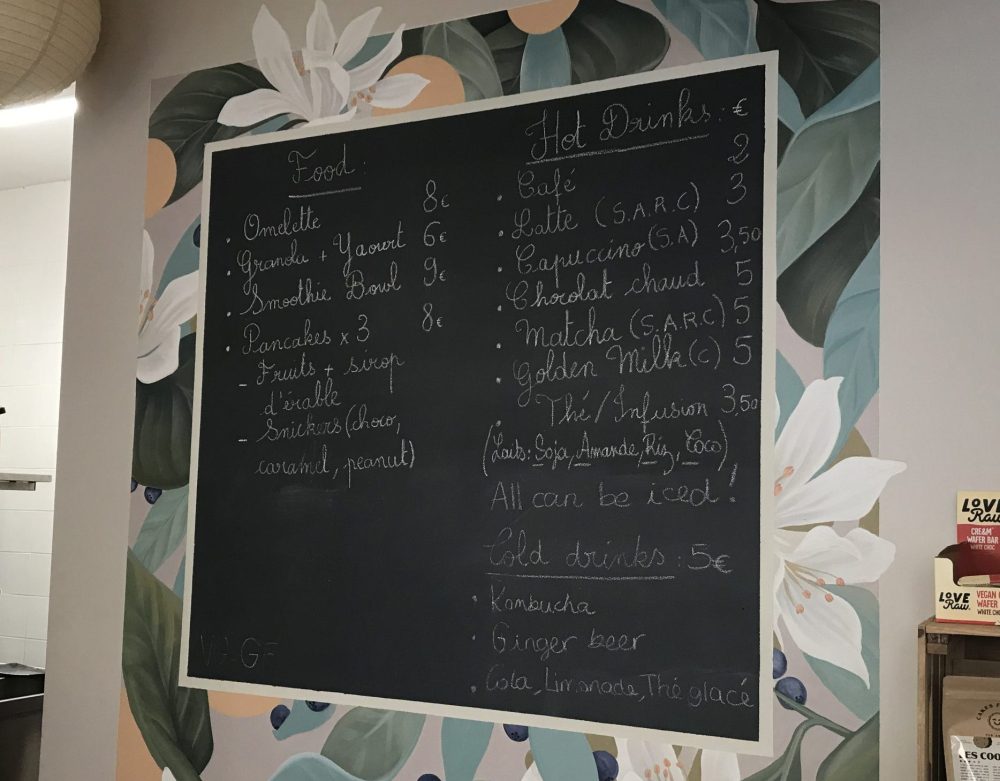 You can read a book while you wait for your food. I didn’t recognize any of them! We will have to return so I can read some of them. 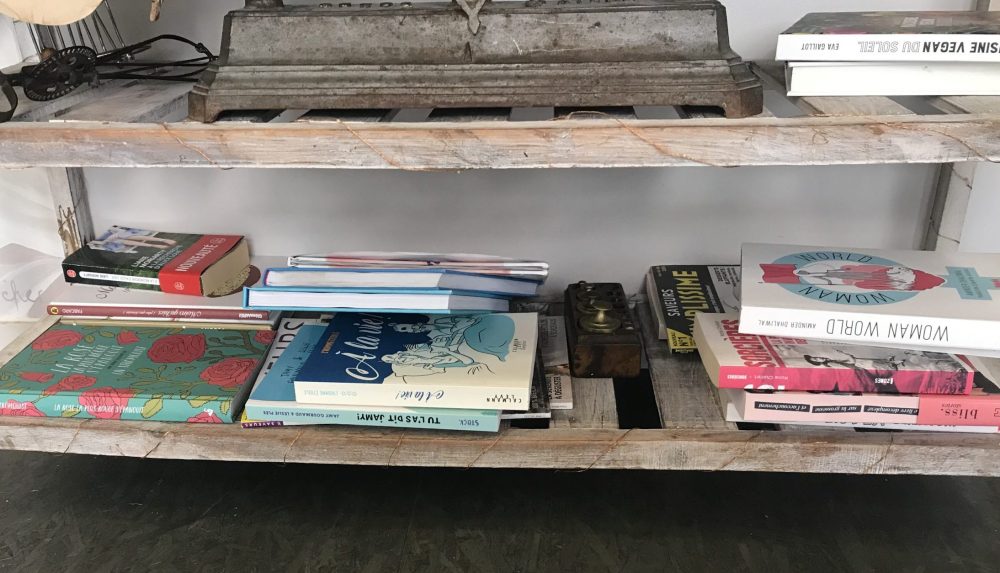 You know I love my hot drinks. I ordered a Matcha Latte. Gary had his mint tea. 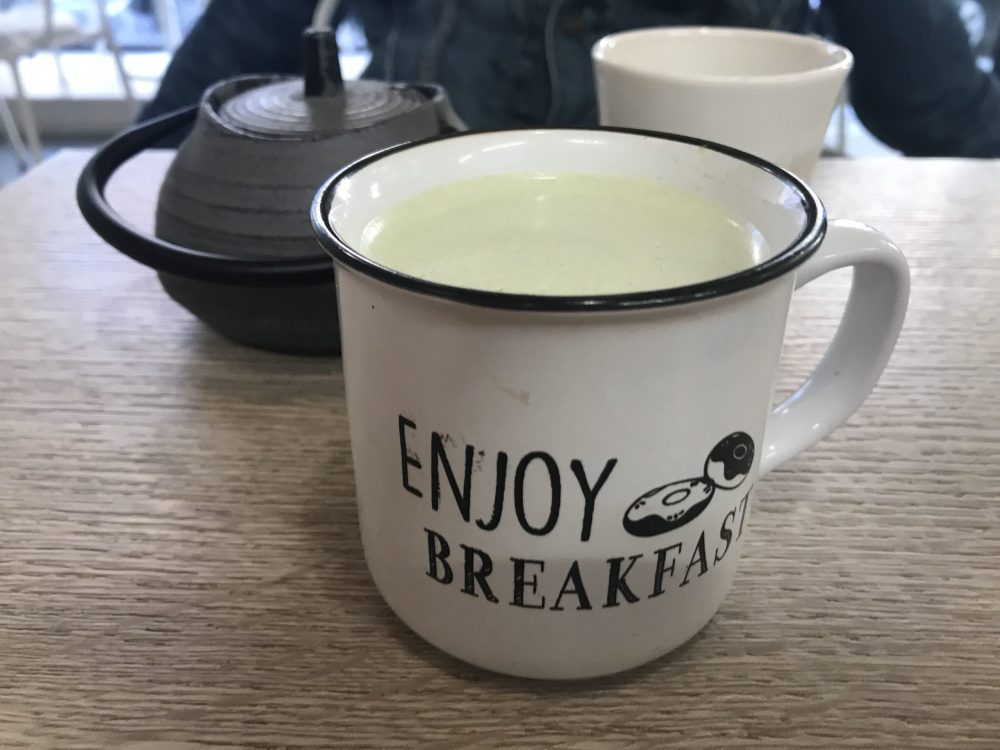 I ordered the Omelette served with greens. It was perfection. 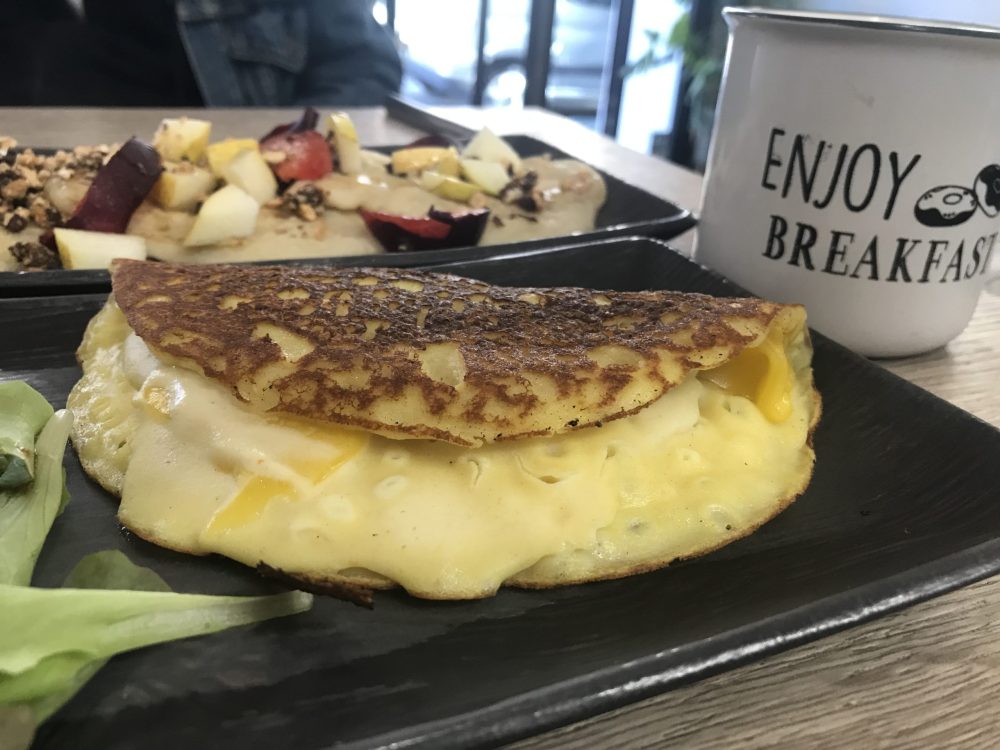 Gary got the pancakes. He was happy. 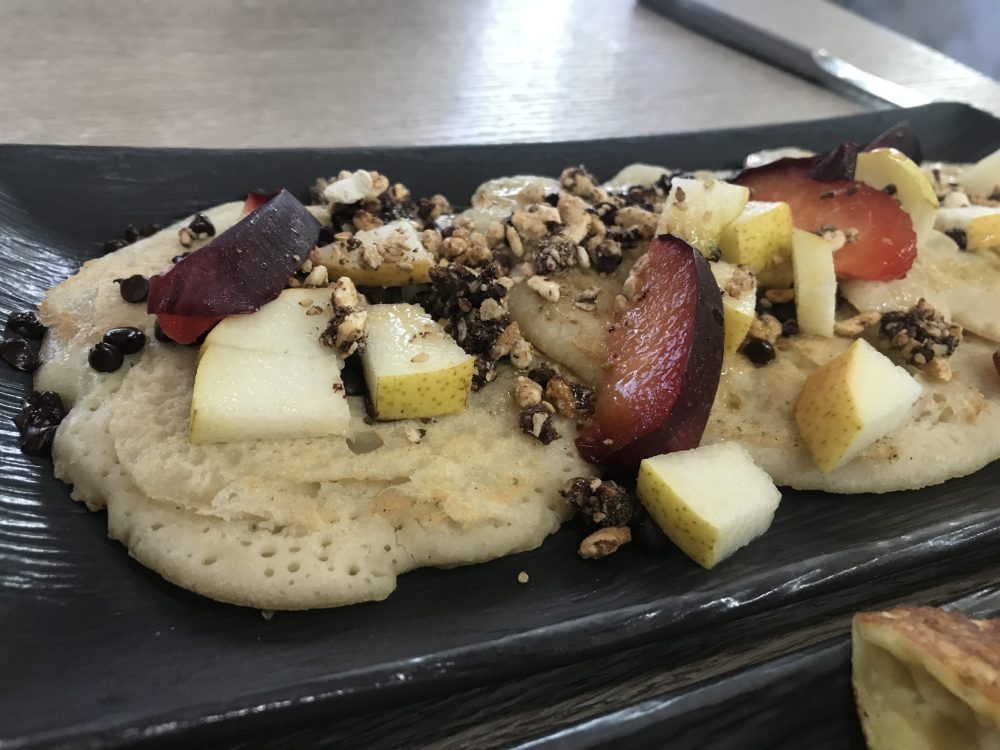 Take a moment to look at all the beautiful details. 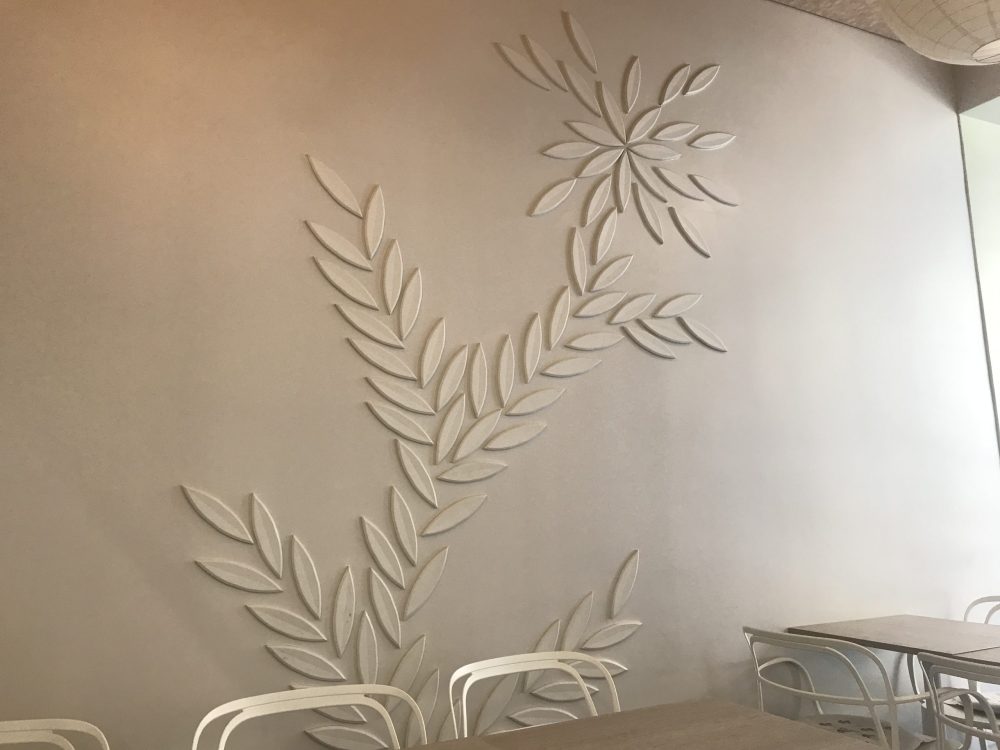 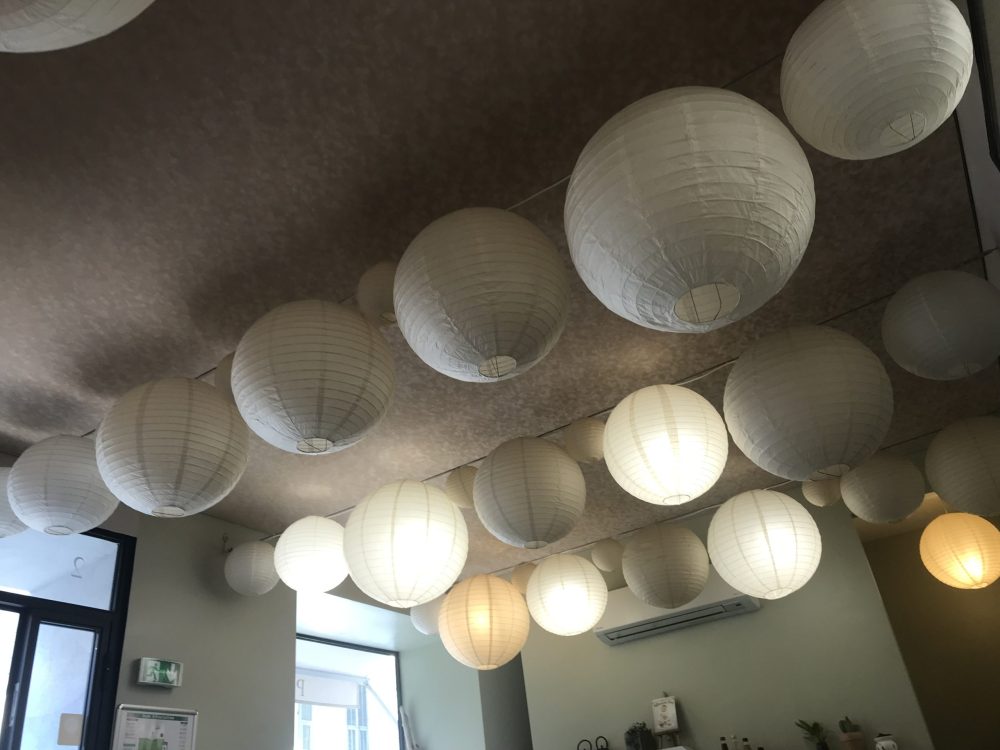 Bathrooms will tell you a lot about a place. This was was inviting. 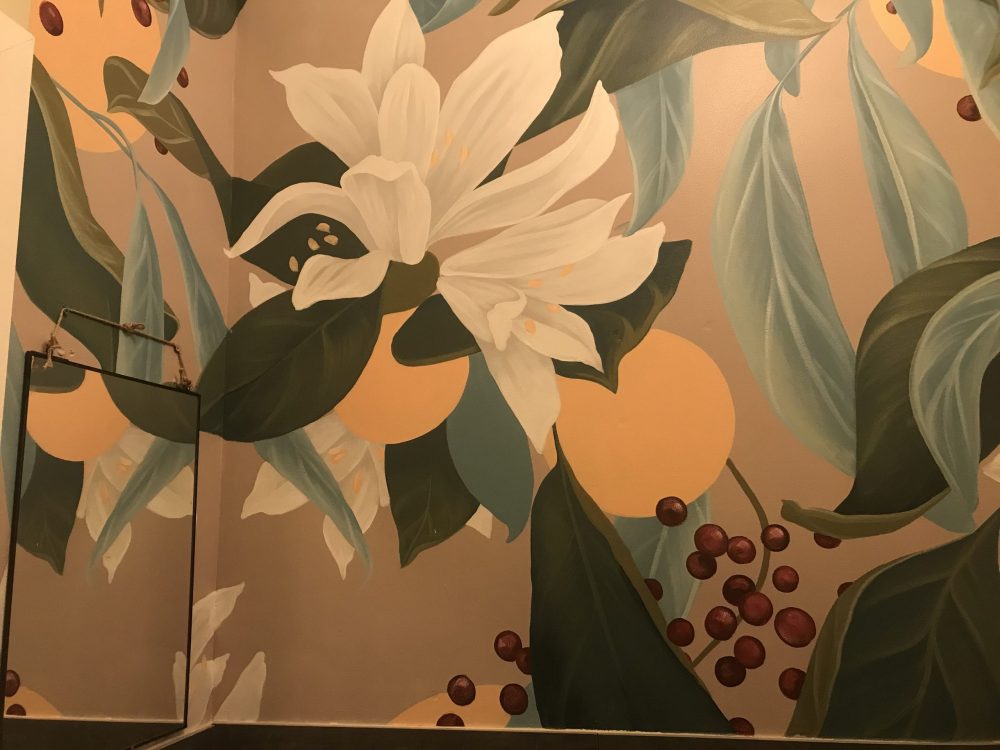 Here’s Camille on the left with her assistant. 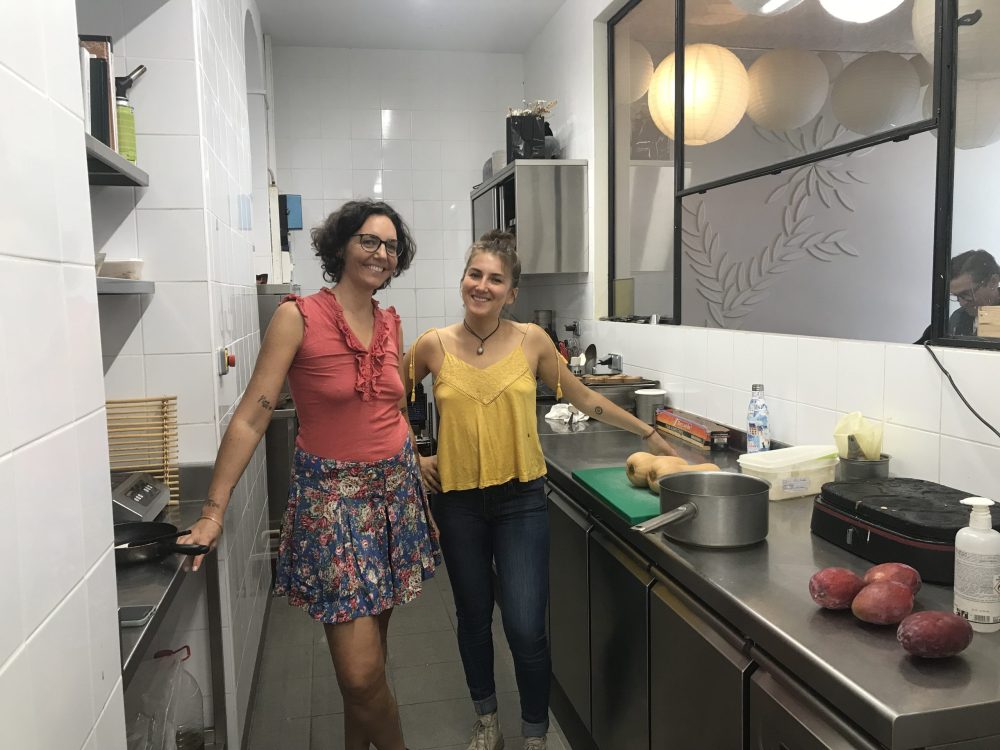 And take a look at some of the creations behind the glass.

We had to say au revoir, which means we’ll be back to see Amour V again. 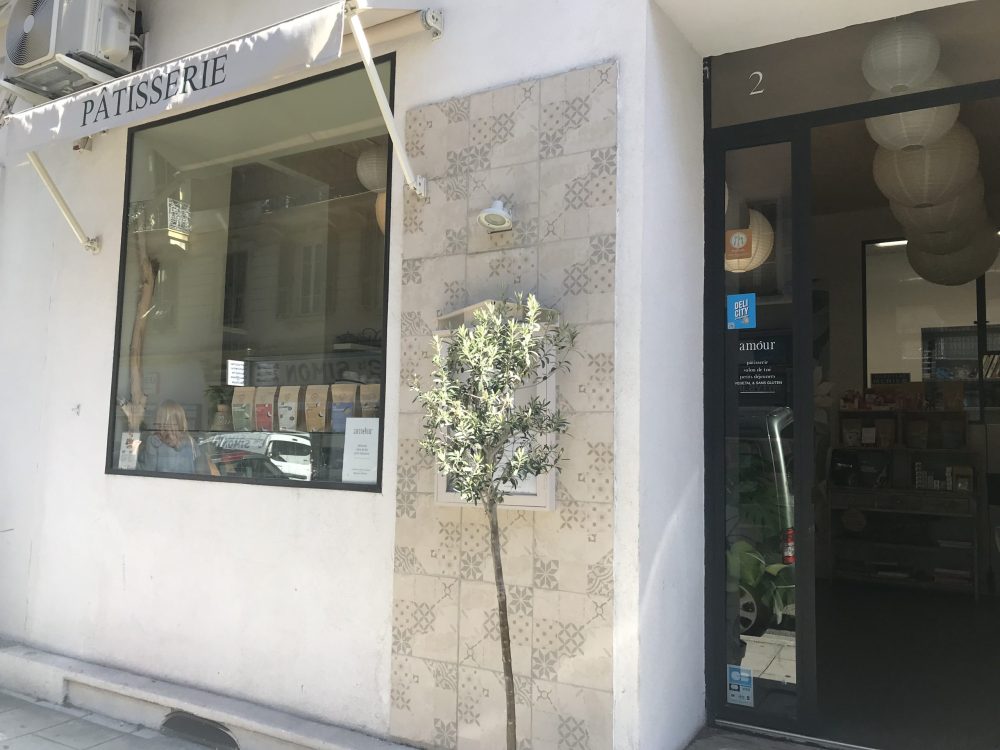 We walked back to the Nice train station just by the sea. It was a bit crazy inside of the station and it wasn’t very clear how things worked. We walked back and forth trying to figure out where we should be. We had to wait for the train to arrive in the station before we could scan our ticket barcodes at the turnstile and go to the train. We had reserved seats in a specific car. We found the car, got our luggage up the stairs and on the shelf to store during the trip. Then we got to our seats. It was a comfortable ride. There was a couple seated across from us with a curious and nervous little companion. 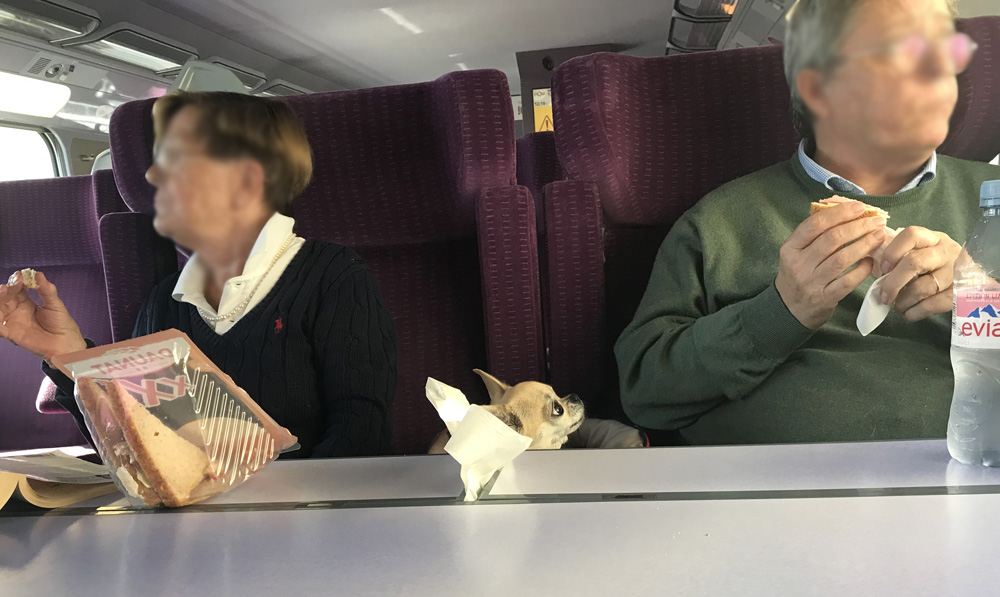 My very dear friend Josée had offered to pick us up at the Aix-en-Provence TGV station. We had emailed back and forth and it had been a little confusing. She thought we were arriving later. As soon as I called her she jumped in her car to get us. We had a chance to take in the sun, the air, and nostaglia of Aix-en-Provence. I had lived here from 1992-1996 and Gary and I visited this idyllic city in 2008.

Josée is retired English teacher, mother and grandmother, with the energy and curiosity of a teenager. I met her in 1992 and adored her intelligence, love of culture and poetic view of the world. It’s not easy to drive in the Centre Ville (city center) of these old French towns but Josée was determined to get us as close to our hotel as possible. She let us off about a block away and invited us to join her for dinner at her home later that evening.

I really wanted the full Aix experience which is why I chose to stay at the Hotel Des Augustins. We loved the hotel, the interior and our room. From the hotel website:
Built during the 12th Century, the Couvent des Augustins was gradually transformed until the 17th century. Martin Luther was one of the most notorious hosts of the Convent. Founder of the Protestant Reform movement and member of the “Confrérie des Augustins d’Erfurt”, he stayed a long time at the Convent after being excommunicated by the Pope Leon X in 1521. Later, some notable Aix en Provence families erected their Chapel here. During the French Revolution, the Convent was divided and sold as national assets. The nearby Augustins Chuch was demolished. The only visible surviving trace is the 15th century bell tower, which one can see from different rooms of the hotel. In 1892, the wing where Chapel once stood was transformed into a hotel. 120 years later, the Hotel des Augustins perpetuates the tradition in a subtle blend of historical heritage and modernity.

After unpacking and relaxing a bit, I went to the salon across the street for a “brushing”. I knew what to ask for having already been to a salon over a week before in Paris. Gary walked around a bit while I pampered myself. I was surprised to find out they didn’t accept credit cards, only cash. I had to run to an ATM to pull out some money. The hairdresser was very chill, she didn’t seem concerned that I might disappear without paying. I tried to tip her too and she wouldn’t accept it. There’s something different about this town…

Josée lived close by, maybe a 15-minute walk away. We strolled along the famous Cours Mirabeau. I was saddened to learn of the demise of Les Deux Garcons, a restaurant that had been destroyed by a fire in early 2019. I had spent many a fine time there with friends. It has still not been restored.

Josée had invited another old friend, Hélène. Hélène had recently lost her partner, Jean-Philippe a little more than a year before. He was part of the group of friends I had had here in Aix. We reminisced and drank some wine before dinner. Josée served us simple and light fare, salad, green beans, bread and fruit. We had brought a few gifts for her to try, a vegan paté and some organic chocolate. She would accept none of it! She gives a lot, and doesn’t want anything in return. She gave us a big square of dark chocolate by Puyricard Chocolaterie. It was a favorite of hers, not just because it was delicious but it was beautifully packaged, and best of all, it was vegan! 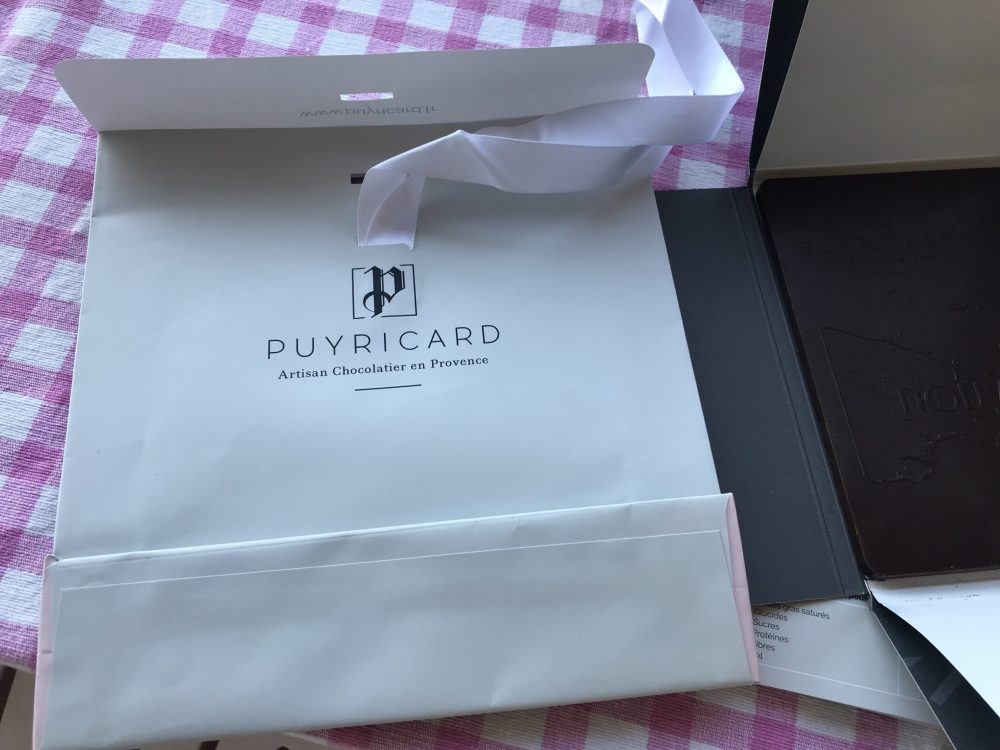 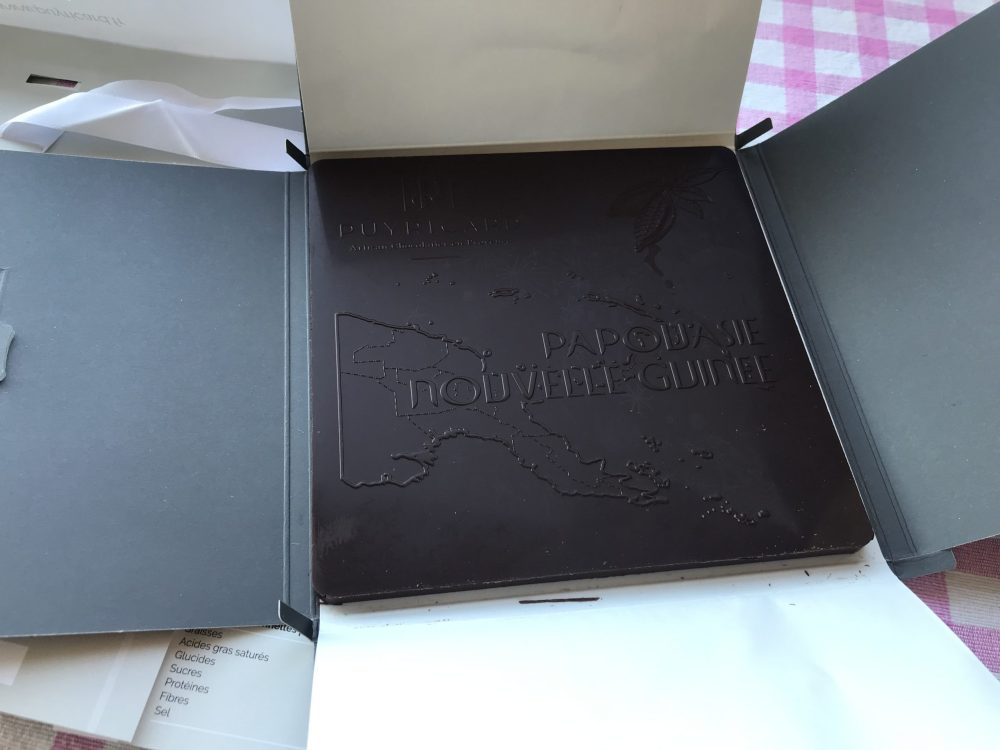 Josée had suggested we visit the Porquerolles, an island in the Îles d’Hyères, Provence-Alpes-Côte d’Azur, France. It was a long drive, over 2 hours, and then a ferry ride. I had a vague memory of going there decades ago. There was an exhibit there she thought would be fun to see. We agreed not to decide until the morning. I was looking forward to sleeping in a bit.